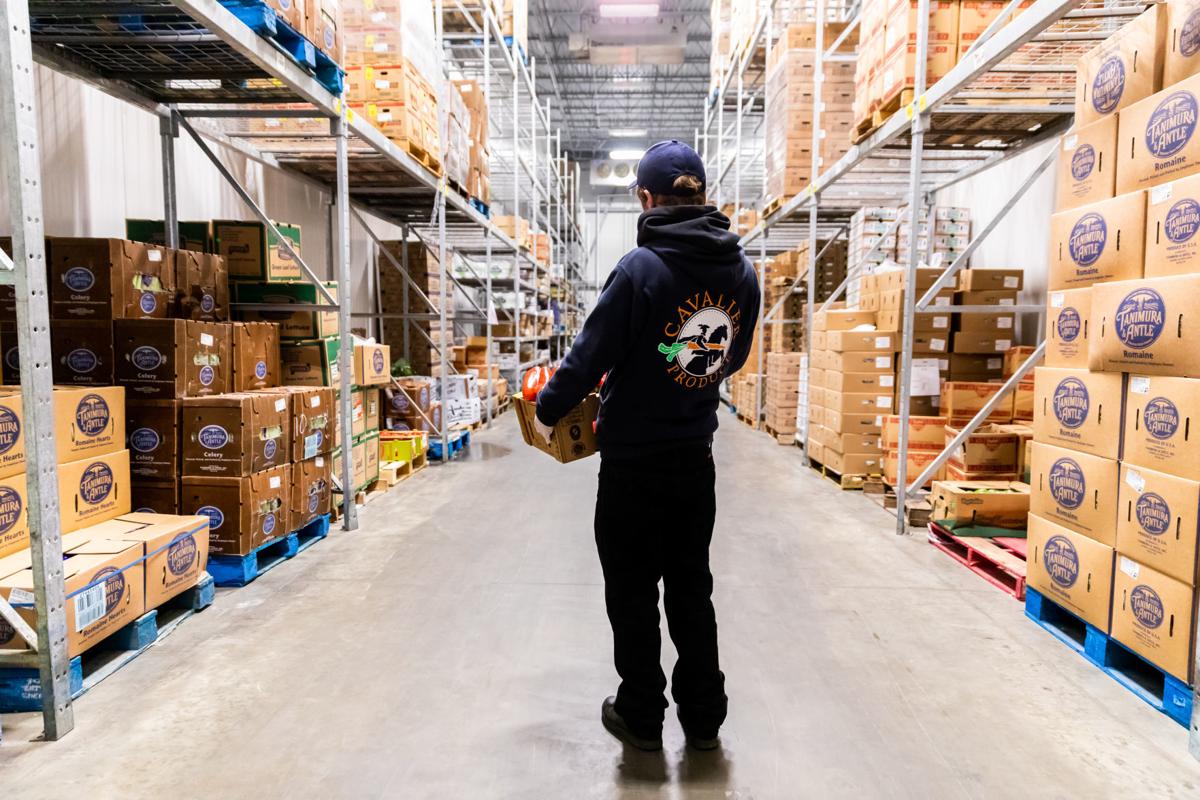 A Cavalier Produce employee carries a box of produce inside the company’s warehouse in Louisa County. The supplier says it will now sell direct to consumers with designated locations for pickup.

A box of produce ready for delivery from Cavalier Produce’s warehouse in Louisa County.

A Cavalier Produce employee carries a box of produce inside the company’s warehouse in Louisa County. The supplier says it will now sell direct to consumers with designated locations for pickup.

A box of produce ready for delivery from Cavalier Produce’s warehouse in Louisa County.

Cavalier Produce has switched its business model by allowing consumers to order fruits, vegetables, cheeses and eggs and have those items dropped off at three locations in the Richmond area.

The Louisa County-based company, which supplies mostly to restaurants, colleges and retirement homes, made the shift after many of its core customers have closed or curtailed operations.

Cavalier Produce is getting its regular shipments of produce and other items in, but has seen a dramatic drop in supplying its regular customers, said Denise Yetzer, the company’s president and owner.

Now, the company wants to supply new ones — as in directly to consumers.

“A lot of people want to eat healthy but are fearful of going into grocery stores, so we are offering them curbside pickup of produce,” Yetzer said.

Same-day pickup is available at the company’s Louisa warehouse in the Ferncliff Business Park off Interstate 64 from 2 to 4 p.m.

Satellite pickup locations will be available in the Richmond region and in the Charlottesville area on Wednesdays and Fridays beginning this Wednesday.

The merchandise includes apples, bananas, pears and potatoes as well as pork from Autumn Olive Farms, local cheeses, jams and eggs and specialty foods such as Hudson Henry granola and Virginia artesian water.

Curbside pickup locations in the Richmond area will be available from 4 to 6 p.m. at the Boathouse restaurant in Rocketts Landing; The Boathouse Sunday Park restaurant in Chesterfield County; and at Red Salt Chophouse & Sushi restaurant in the GreenGate development in western Henrico County.

The company has three pickup locations in the Charlottesville area.

Also, Cavalier Produce is encouraging customers to participate in its buy-a-box and give-a-box program by donating $10 with each order so a box of produce can be given to a laid-off restaurant employee. The company is working with different local restaurants to identify the employees.

“It’s our way of helping out the restaurant workers who have been impacted,” she said. “And we are helping out local growers and producers and helping them get their products to market.”

Other produce suppliers and small farmers are making similar moves.

For instance, Amy’s Garden, which operates an organic farm in Charles City County and has been a leading supplier to local farmers markets, is setting up a program where consumers can buy a sample box of produce items by the week, co-owner Amy Hicks said.

Amy’s Garden is starting to set up a way on its website — www.amysorganicgarden.com — for people to place orders. The season is just starting so the first produce items will not be ready to harvest until late April, she said.

She’s also encouraging consumers to join her community-supported agriculture program where participants pay $495 and receive between five and nine different produce items weekly that are harvested from mid-May to mid-August.

“We are considering home delivery or drop-off points to get our goods to people who need it and want it,” Hicks said.

Kudos to creative business owners in a crisis making the best of a bad situation.