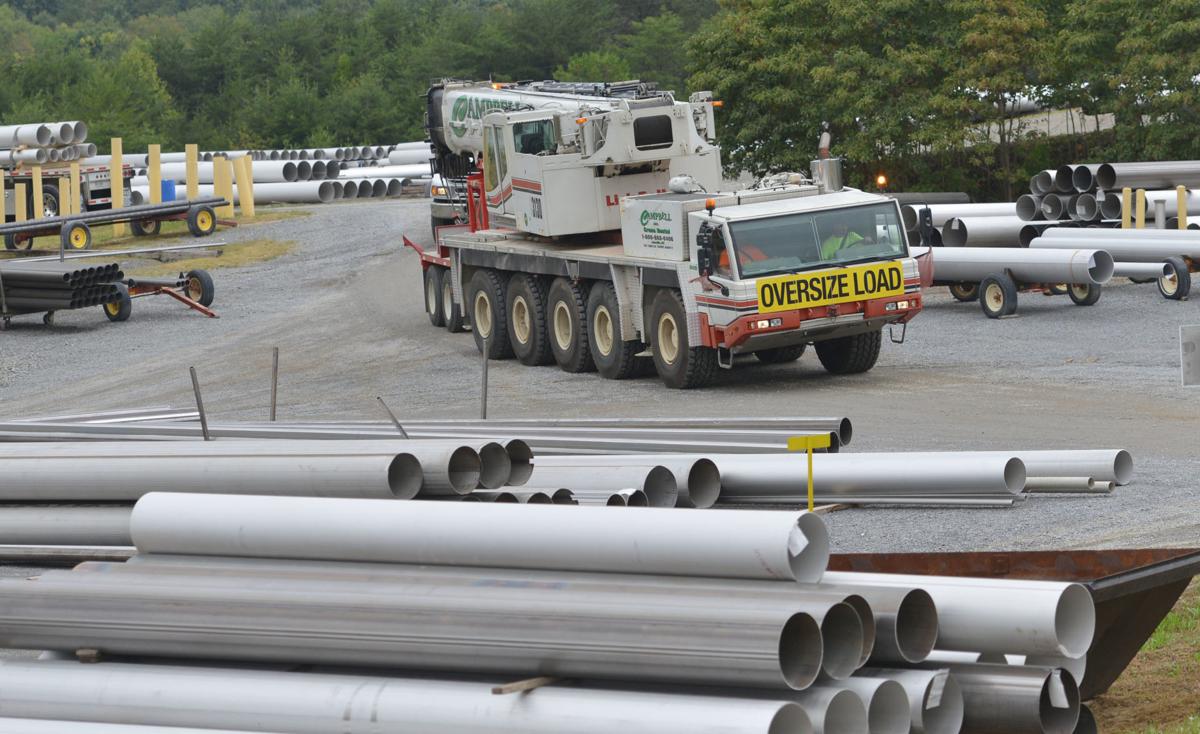 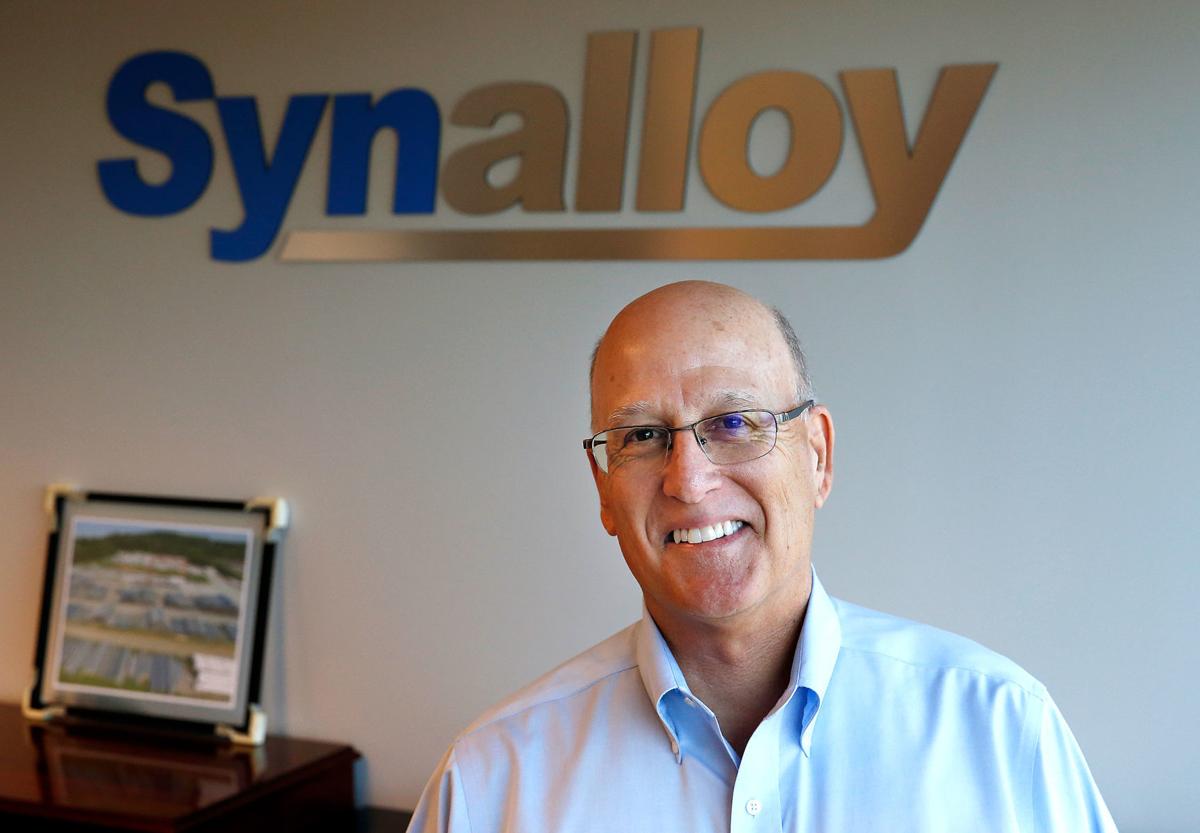 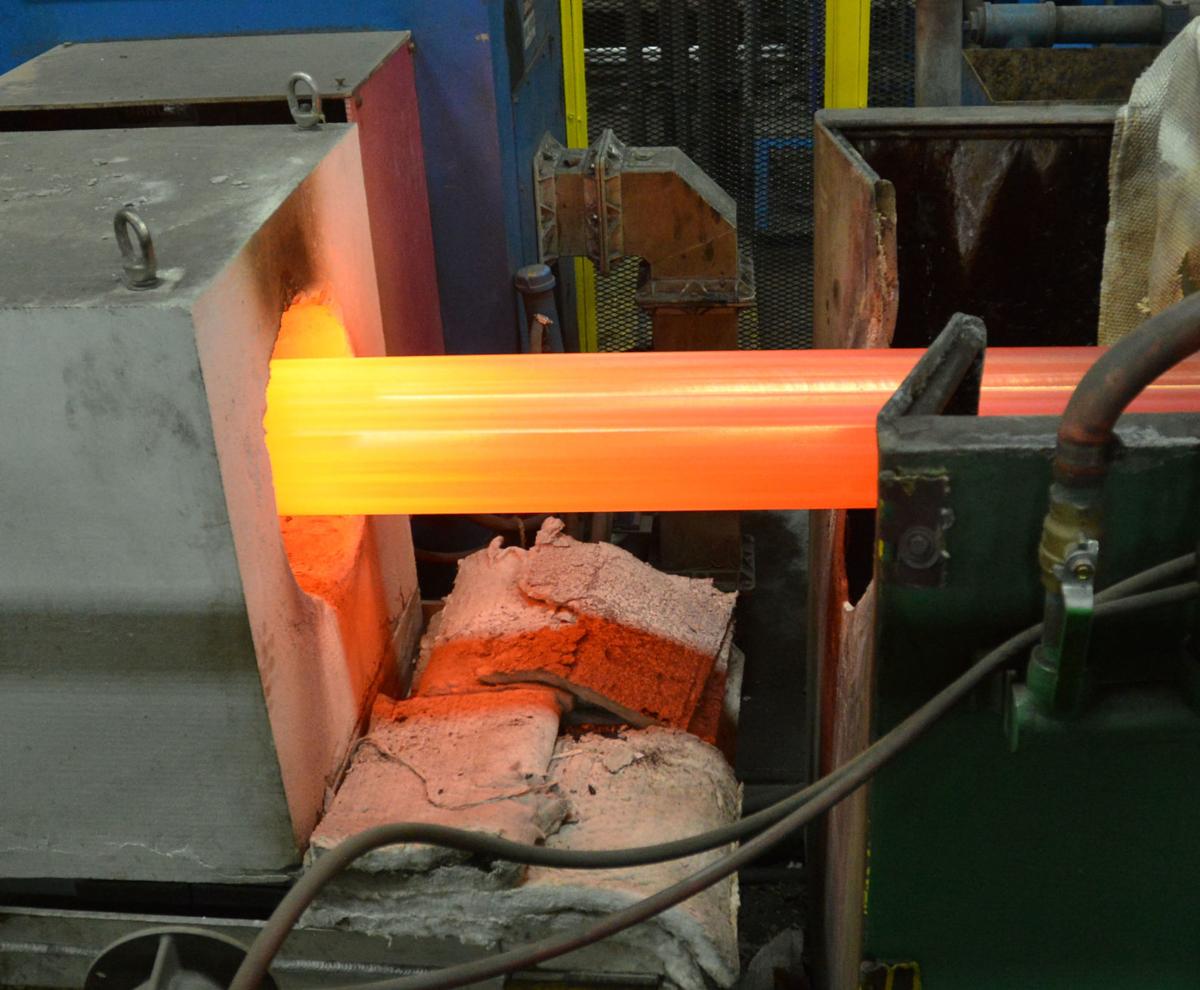 Stainless-steel pipe is heated and watercooled to stabilize the material after welding at Synalloy Corp.’s Brismet plant in Bristol, Tenn. Machines bend and press rolls of stainless steel into piping for applications in various industries, including oil and gas. Sections of pipe wait to be moved to another part of the Brismet plant during the making of the end product. 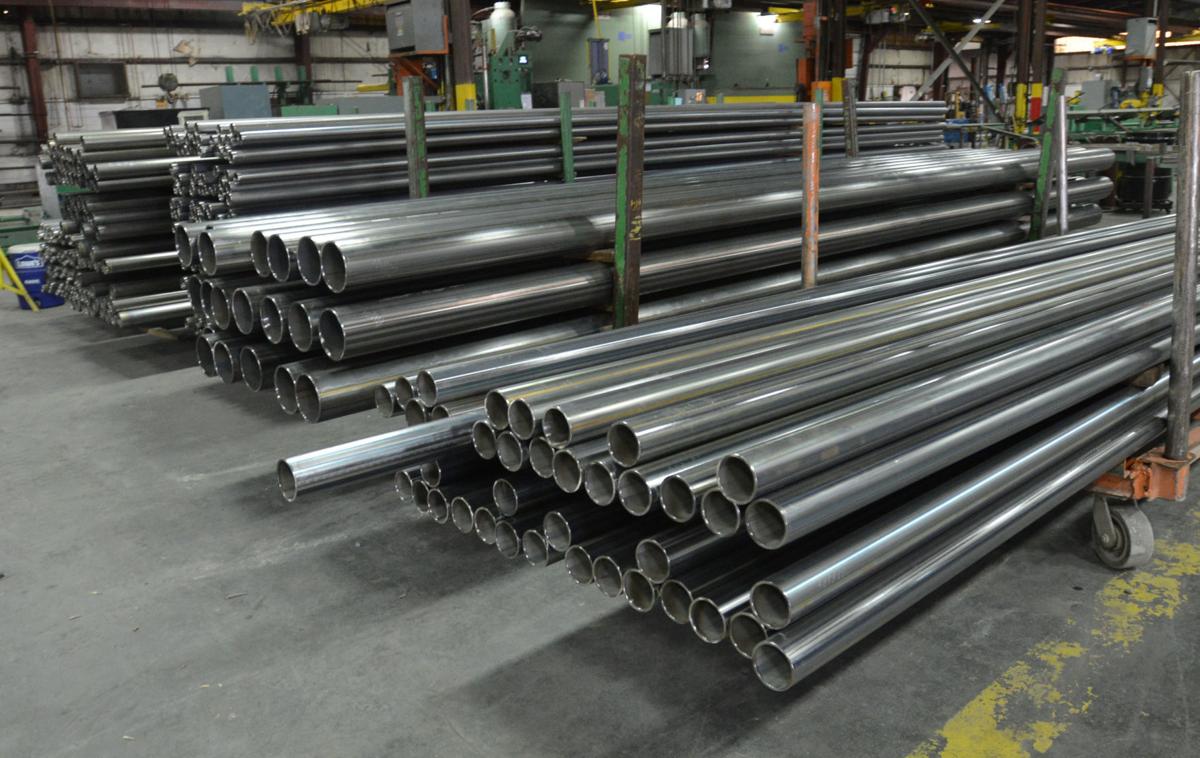 Sections of stainless pipe wait to be moved to another section of the Brismet building in Bristol, Tenn., during the process of making the end product. Henrico-based Synalloy Corp. owns Brismet, formerly Bristol Metals.

Stainless-steel pipe is heated and watercooled to stabilize the material after welding at Synalloy Corp.’s Brismet plant in Bristol, Tenn. Machines bend and press rolls of stainless steel into piping for applications in various industries, including oil and gas. Sections of pipe wait to be moved to another part of the Brismet plant during the making of the end product.

Sections of stainless pipe wait to be moved to another section of the Brismet building in Bristol, Tenn., during the process of making the end product. Henrico-based Synalloy Corp. owns Brismet, formerly Bristol Metals.

While most businesses in the Richmond region have been struggling with the impact of the coronavirus pandemic, one local company has been engaged in a monthslong battle with a dissident investor group that wants to oust its CEO and replace most of its board of directors.

Henrico County-based Synalloy Corp., which owns manufacturing businesses in several states that make materials such as pipes and tanks for oil, gas, industrial and municipal infrastructure, is facing a rebellion from an activist shareholder group that owns 25% of the company’s stock.

In March, Privet Fund Management LLC, an Atlanta-based investment firm, announced it was nominating its own slate of five directors for Synalloy’s eight-member board of directors.

The board takeover attempt came after Privet made two offers to buy Synalloy in 2019 — first at $20 per share in April last year and then at $18.50 a share in August — but both offers were rejected by Synalloy’s board, which argued that they undervalued the company.

Privet then joined forces with another investor, Illinois-based UPG Enterprises LLC, in an attempt to gain a majority of the board.

The dissident shareholders have said they want to replace Craig Bram, Synalloy’s president and CEO since 2011.

Synalloy has defended its business results and strategy, but the company also has offered a compromise that would put three of the dissident investors’ nominees on the board. Under that proposal, Synalloy’s current leadership would retain a majority of the board.

The fight seems likely to be settled on Tuesday, when Synalloy is scheduled to hold its annual meeting of shareholders and tally the votes for its board of directors.

The proxy battle has escalated into a series of back-and-forth accusations.

Privet has accused Synalloy of mismanagement and underperforming financially.

The investment group claims there is cronyism among Synalloy’s board and management, including charges that Bram and Synalloy’s board chairman, Murray Wright, “have not been honest with shareholders” about “a long and troubling history of undisclosed business ventures that began decades ago and has lasted throughout their entire tenures at Synalloy.”

For instance, Privet said Bram and Wright worked together at the law firm of Wright, Robinson, Osthimer & Tatum and that Wright was a board member of Bizport, a document management company in Richmond that Bram managed from 2002 to 2010.

Synalloy has a small headquarters staff in the Innsbrook Corporate Center in western Henrico, but it has hundreds of employees at manufacturing operations in several states, including Brismet, formerly Bristol Metals, a maker of stainless-steel pipes with a factory in Bristol, Tenn.

The company’s five other business subsidiaries include Palmer of Texas, a maker of storage tanks for the oil and gas and food industries and for municipal water systems; and Manufacturers Chemicals LLC, a Tennessee-based maker of industrial chemicals.

Synalloy’s revenue and profit has trended upward since 2015, with revenue surpassing $305 million in 2019. The gains have come partly through several acquisitions the company has made since 2012.

Bram has said his goal is to get the company to $500 million in revenue.

In 2019, however, Synalloy posted its first bottom-line loss in three years — a loss of $3 million, or 34 cents per share, as market conditions weakened. Synalloy stock has traded between about $7.16 per share and $17.17 per share over the past 52 weeks, as of Thursday.

Bram said in a report to shareholders that 2019 was “a challenging year for the company,” but he said the company also gained market share in several key product areas.

“We have taken significant steps in recent months to further lower our costs across the company,” he said in the company’s fourth-quarter 2019 report.

On April 27, Privet contacted Synalloy shareholders and accused the company of “lavish spending,” including “extravagant compensation” for its CEO. Bram has received a base salary of $495,000 per year since 2018. His total compensation was just over $1.1 million in 2019, including stock awards and non-equity incentive plan compensation, according to the company’s proxy filing.

Privet also criticized Synalloy’s leadership for taking an “undisclosed ownership interest” in a private jet, along with a real estate firm whose investors include Wright, who has served as board chairman since 2014.

Wright was senior counsel at the Richmond law firm of DurretteCrump PLC from 2013 to 2016 and was a founder and managing director of Avitas Capital LLC, a closely held investment banking firm in Richmond, from 1999 to 2012.

Synalloy responded to that accusation by saying that the investment in a private jet was a money-saving decision because its managers need to travel among various operations in several states.

“Several years ago, we examined more efficient ways to transport our personnel to their sister facilities, many of which are not located near commercial airports or else have access only to limited daily flights,” the company said. “The company determined that fractional ownership of a plane with several other partners offered a reasonable financial solution.”

Privet said that if it takes control of the board, it intends to install one of its board nominees, Chris Hutter, a co-founder of UPG Enterprises, as the company’s interim CEO. Privet said Hutter has agreed to take only $1 in salary during his time as interim CEO.

Synalloy responded that Hutter “does not appear to have relevant prior experience to serve in such capacity,” while Bram has “extensive experience with publicly traded manufacturing and distribution companies,” including working for the former Henrico-based Reynolds Metals Co. and the food wholesale distributor Richfood Inc.

Bram became president and CEO in January 2011 and served as a board member since 2004. He was the founder and has been president of Horizon Capital Management Inc., an investment advisory firm in Richmond, since 1995.

Synalloy’s history dates to 1945, when the company organized as Blackman Uhler Industries, a distributor of textile dyes based in Spartanburg, S.C. The company diversified into specialty chemicals and metals in the 1960s, including buying Bristol Metals, and went public as Synalloy Corp. in 1967.

For most of its history, the company was based in South Carolina, but it started shifting its administrative operations to Henrico when Bram, a Richmond-area businessman and investor, was named its CEO in 2011 after serving six years on the board of directors.