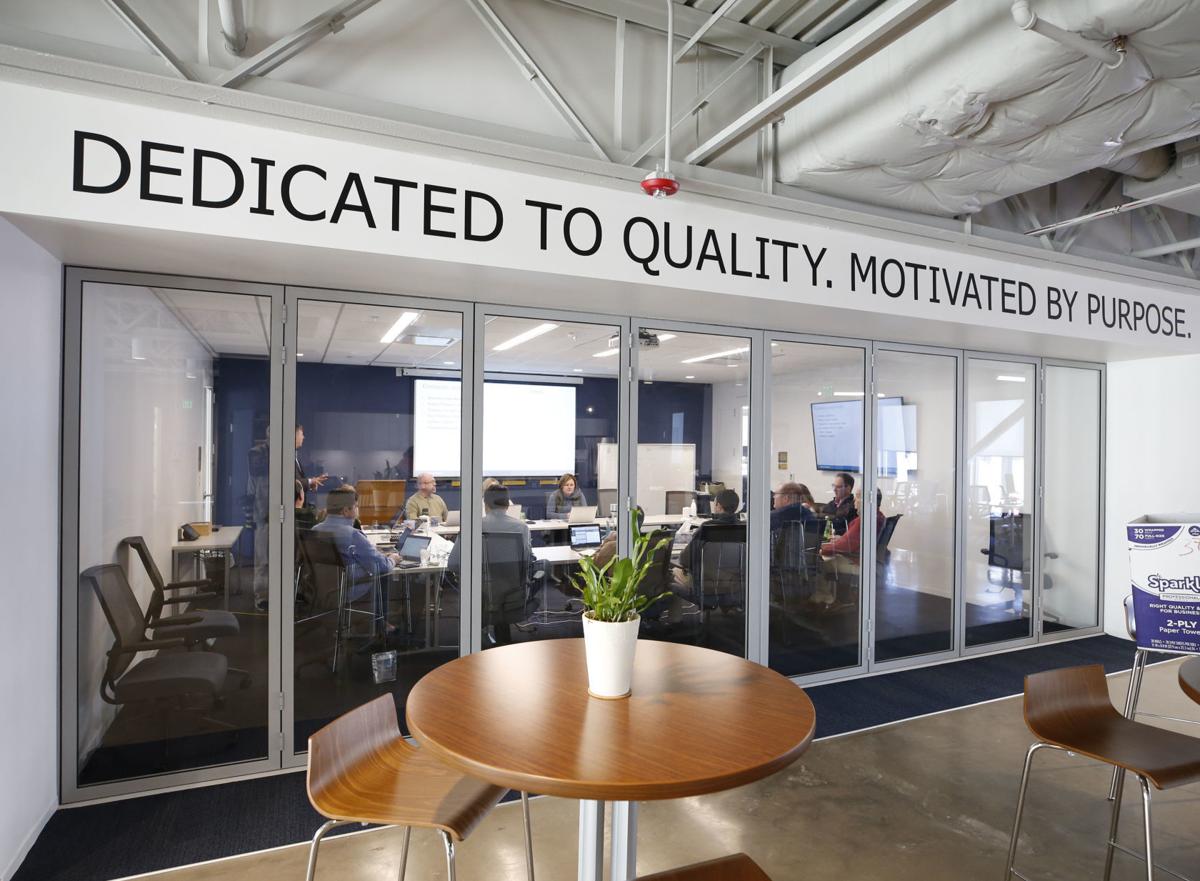 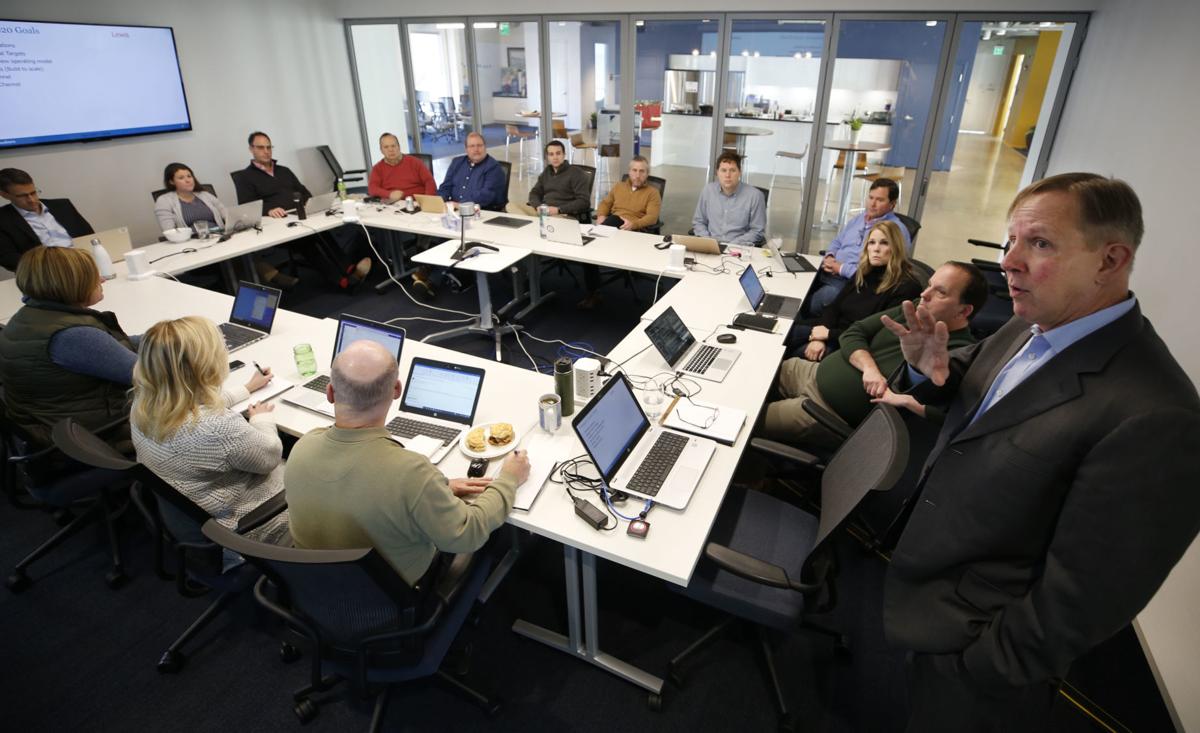 Lewis Broome (right) became Impact Makers’ CEO when ex-CEO Andy Wolff resigned in July after less than a year with the firm. “The model has attracted people who are fairly seasoned in their careers and have been successful and are looking for a way to give back, but want to keep working,” Broome said. 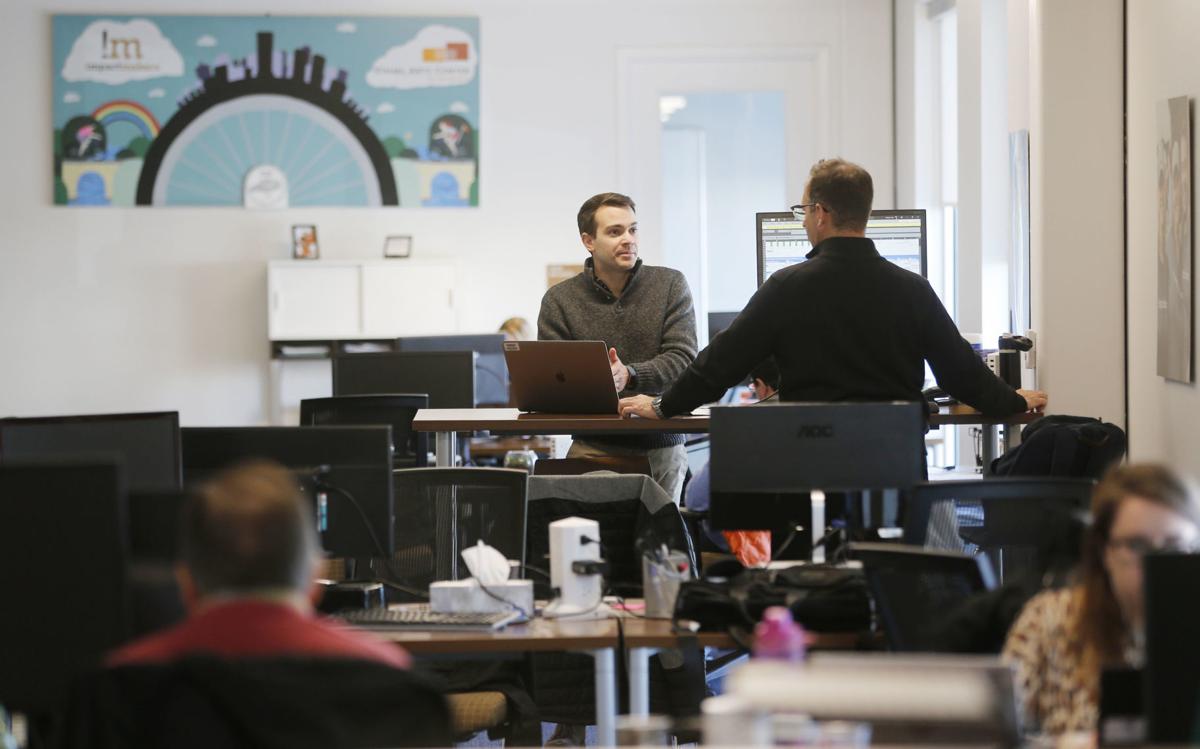 Impact Makers has about 85 full-time equivalent employees in Richmond’s Scott’s Addition. “As we became more focused, we downsized a little bit, but in the last several months, we have been growing,” Broome said. 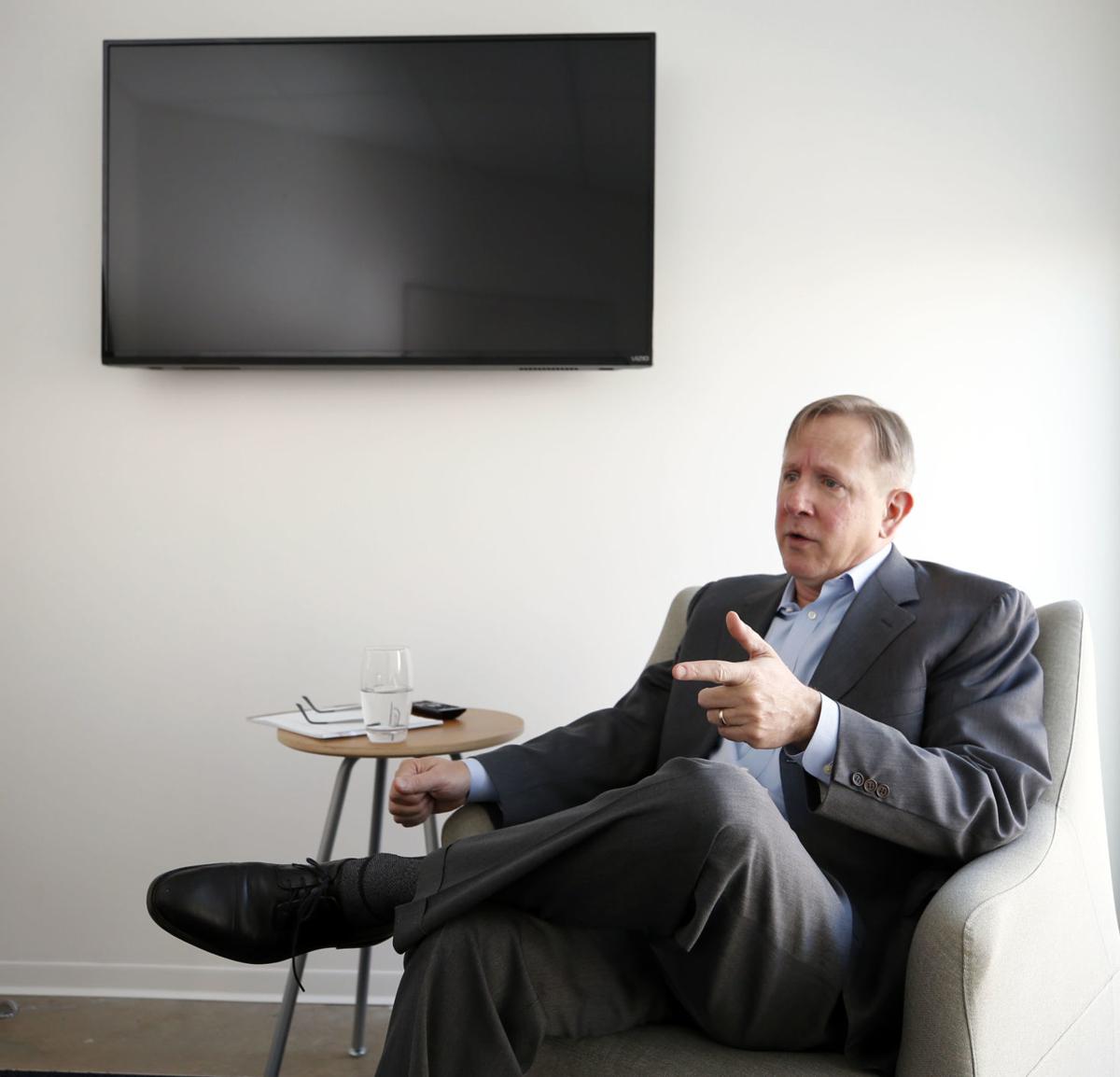 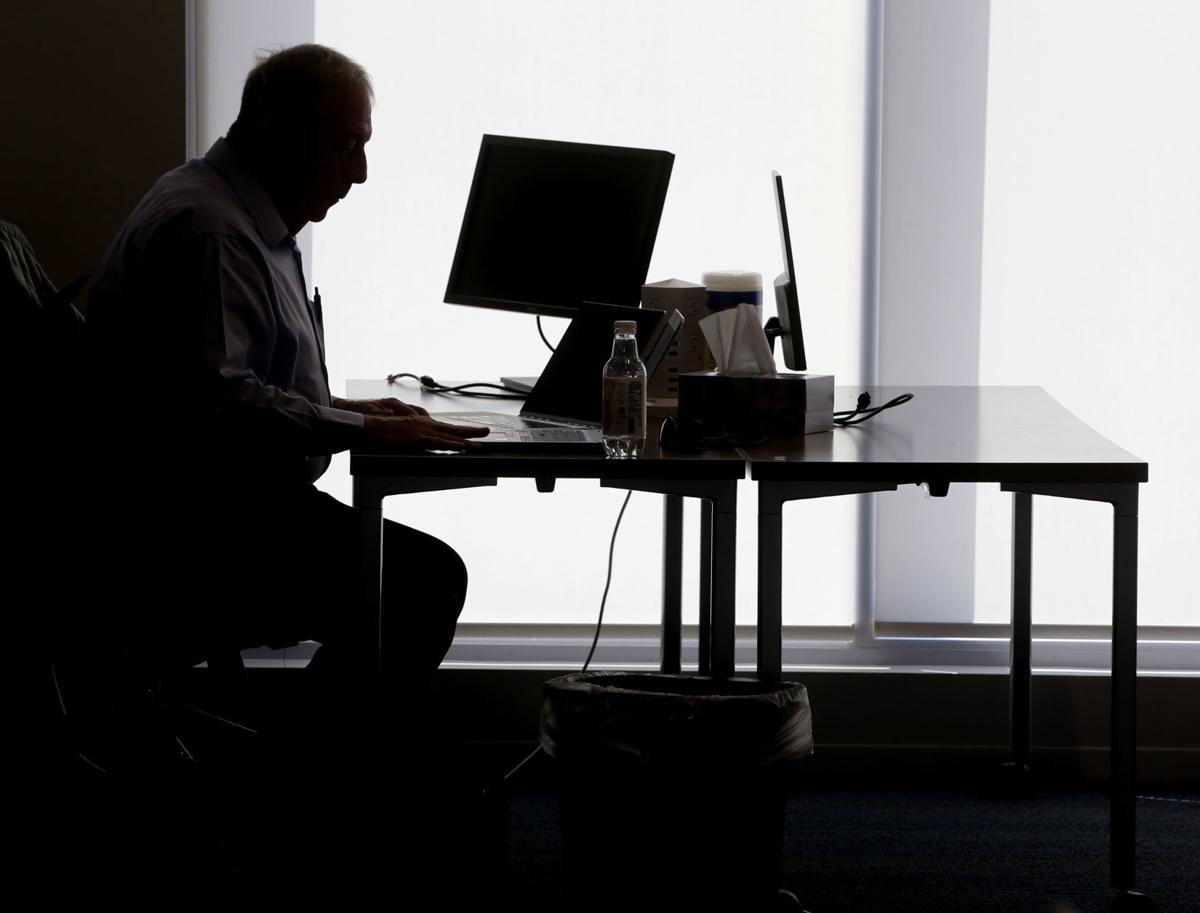 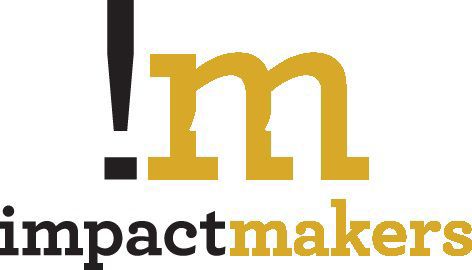 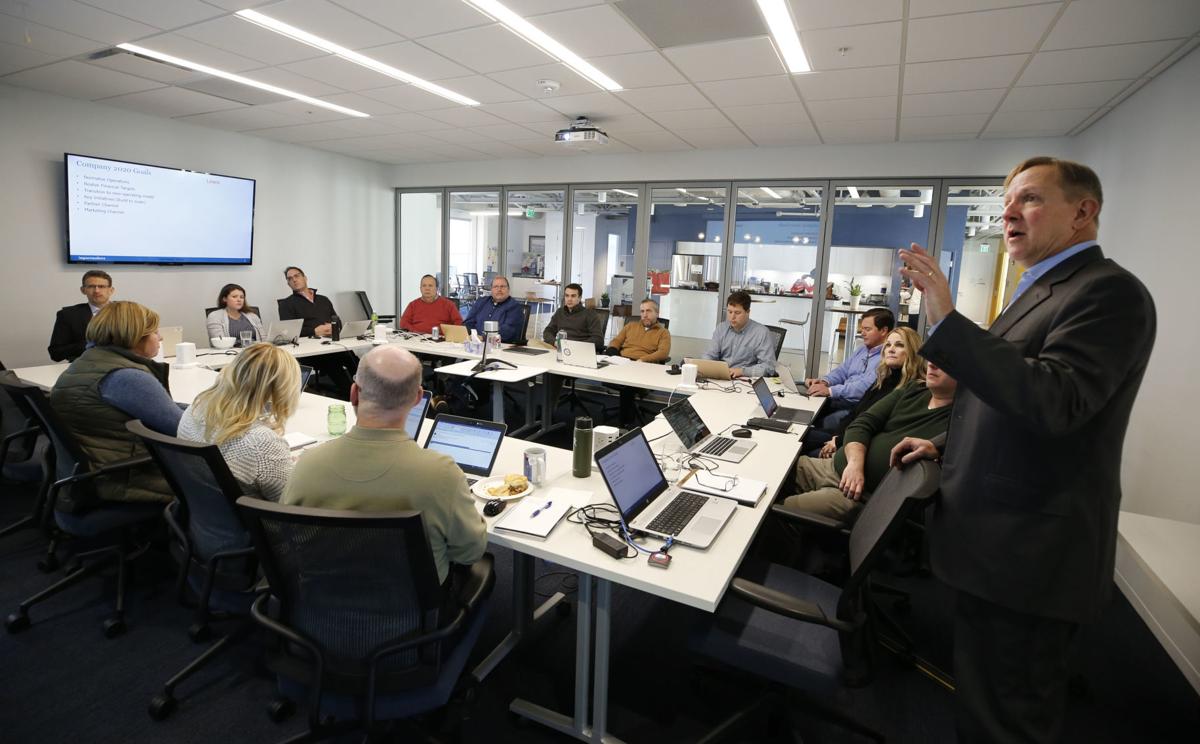 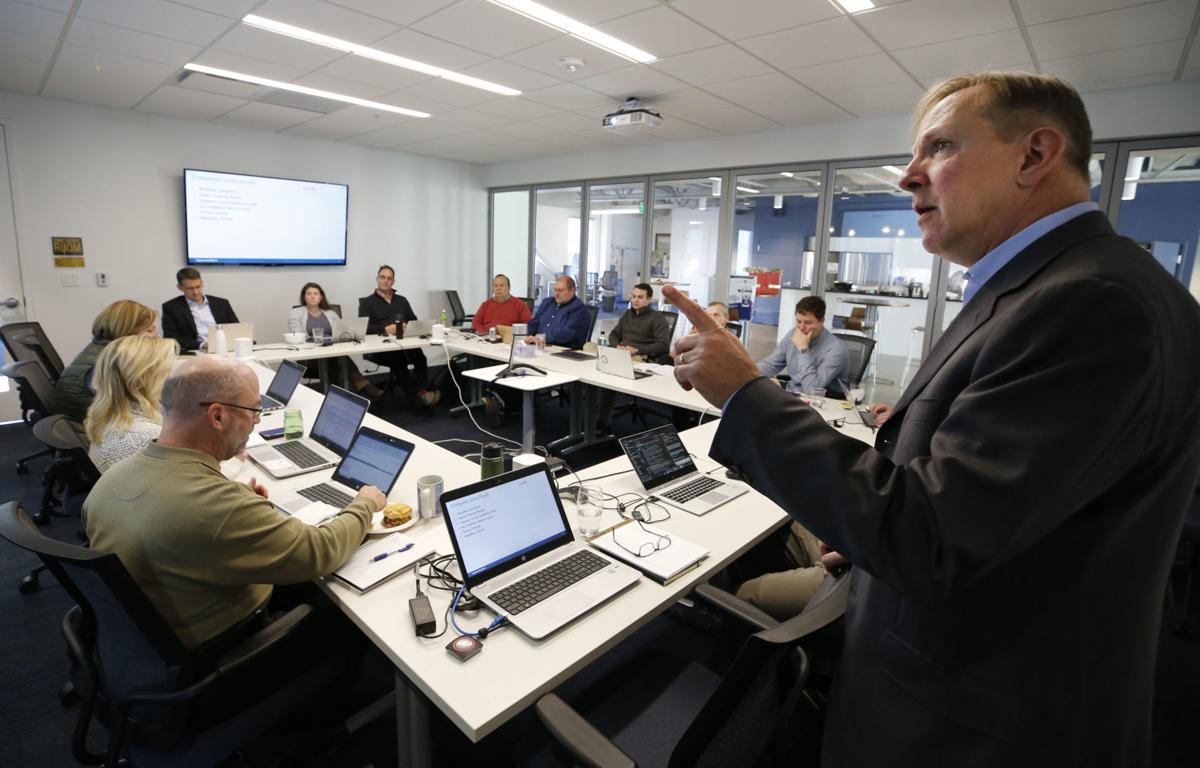 Lewis Broome (right) became Impact Makers’ CEO when ex-CEO Andy Wolff resigned in July after less than a year with the firm. “The model has attracted people who are fairly seasoned in their careers and have been successful and are looking for a way to give back, but want to keep working,” Broome said.

Impact Makers has about 85 full-time equivalent employees in Richmond’s Scott’s Addition. “As we became more focused, we downsized a little bit, but in the last several months, we have been growing,” Broome said.

Impact Makers, the Richmond-based consulting company known for donating its profits to charity, is entering the new year with a relatively new CEO, a leaner organization and a focus on growth.

After settling a lawsuit in June with its founder and former CEO over the company’s leadership structure, Impact Makers is keeping its eye on the long-term goal that has always been part of its model: returning the value and wealth it creates through its for-profit work back to the community, its new CEO said.

“The model has never been stronger,” said Lewis Broome, who stepped into the leadership role at Impact Makers when former CEO Andy Wolff resigned in July after less than a year with the company.

Broome, who had previously served as the company’s chief operating officer, said Impact Makers did not lose clients as a result of the brief but public legal tussle.

“If anything, we are doubly committed to the mission,” he said. “The staff is very galvanized around that.”

The company continues to attract talented employees and is well-positioned to take advantage of market demand in the areas where it provides technology consulting for clients, particularly in data analytics, cloud migration, enterprise management and cybersecurity, he said.

“We believe the company is hitting on a couple of key market convergences,” Broome said in an interview at the Impact Makers headquarters in the Scott’s Addition area of Richmond.

“We have the right mix of services that we are offering, and we have become focused in financial services and health care,” he said. “That means health care providers, but we also work with health care payers. We do public sector work, which is really state and local government.”

The company also provides consulting for commercial clients, particularly for businesses with anywhere from $100 million to $2 billion in annual revenue, as well as some advisory services for Fortune 500 clients, he said.

Impact Makers was founded as a small tech consulting firm in 2006 by entrepreneur Michael Pirron.

It quickly gained notice as Virginia’s first certified B corporation, a business that formally adopts a charitable, social or environmental mission beyond making a profit.

The company has nonprofit partners, such as the Richmond organizations Peter Paul Development Center, Family Lifeline and RX Partnership, which it helps support financially and for which it provides pro bono advisory and technology consulting services.

On the for-profit side, Impact Makers grew to have about $20 million in revenue in 2018.

In 2015, the company restructured as a benefit corporation and announced it had gifted equity ownership to two organizations that support philanthropy and community development: Virginia Community Capital and The Community Foundation for a Greater Richmond. As shareholders, the two groups would benefit from any eventual sale of the company.

Pirron led the business until he stepped down as CEO in January 2018. In May 2019, Pirron filed a lawsuit claiming that he had been unfairly pushed out of a leadership role and that a governance change made by the company’s board of directors would jeopardize Impact Makers’ philanthropic mission.

In June, the lawsuit was settled, reversing the board’s previous decision and restoring Pirron to a permanent director role on the board of a holding company that is responsible for protecting the philanthropic mission. While he is on that oversight board, Pirron said in a recent interview that he is no longer involved in day-to-day operations or business strategy.

“I am hopeful that the company will grow and have a successful outcome for the community as articulated in the original vision and founding principles of the organization,” Pirron said.

“I think Impact Makers has some really talented people — people who care about the community, and I want to see it be wildly successful and achieve the greatness that I know is built into its unique model and mission,” he said.

Broome, 54, said he shares the long-term vision for Impact Makers.

“I really think Michael’s vision on this is the wave of the future,” he said. “The model is that we are a for-profit company where we are not asking employees to make any financial or career sacrifices, but at the same time we are able to have a big impact on our community.”

“The model has attracted people who are fairly seasoned in their careers and have been successful and are looking for a way to give back, but want to keep working,” he said.

“At the beginning, it was exciting,” Broome said about his work on Wall Street. “I was doing really interesting work.”

When the financial crisis and recession hit in 2008, “I had a front seat watching everything implode,” Broome said. “Wall Street was not a fun place to be then.”

“Essentially, I was laying off people every three months,” he said. “I had a team of about 200 people globally, and after the fourth round of layoffs, I decided Wall Street was not the place I wanted to work anymore.”

So Broome, who grew up in Midlothian, decided to come back to the Richmond area. He worked for seven years as CEO of Data Blueprint, a niche data management consultancy in Henrico County, before joining Impact Makers in August 2016 to build the company’s data analytics practice.

Broome earned a bachelor’s degree in finance from Virginia Tech. After college, he worked for about seven years at a bakery in Richmond’s Fan District owned by his brother, the late Claude Broome. He then earned a graduate degree from Virginia Commonwealth University in business information systems before going to Wall Street.

While Impact Makers’ status as a B corporation is a motivating factor for employees, it is not the primary reason that clients hire the firm, Broome said.

“Our clients like our model,” he said. “But they don’t hire us because of the model. They have real business problems, and they need real solutions.”

In data management and analytics, for instance, “there is so much data being created today, and people don’t always know how to wrap their hands around it,” he said.

For instance, the company has done data modernization work for Virginia Premier Health Plan Inc., a subsidiary of the VCU Health System that is a managed care organization with about 280,000 members statewide in its Medicare, Medicaid and health insurance exchange programs.

“We’ve helped them learn how to use data as a true asset across the organization,” Broome said.

The Impact Makers philanthropic model was “a bonus,” Summers said.

“That is a win-win for us,” he said. “In our opinion, it is somewhat aligned with us and our mission. We are here to serve.”

“What we found with Impact Makers is they have a lot of talent,” Summers said. “They are right here in Scott’s Addition. They are local, and that is important to me and our company. It is rare to have an organization of that caliber right in your backyard. They are a hidden gem.”

One goal for Impact Makers is to replicate its model in other markets, Broome said.

In April, the company opened an office in the Tysons Corner area of Northern Virginia with about 12 employees to serve clients in the Washington, D.C., area. Other potential markets could include Atlanta or Nashville, though no decisions have been made, Broome said.

“We will be very intentional about the locations we go after,” he said.

Impact Makers does not disclose its revenue or profit. Documents filed during the court case said the company lost money in 2017 and 2018.

Broome said in an interview earlier in December that “the health of the numbers is better than it has been.”

“The top line number has dropped some, but the health of the margins and profits are stronger than they have been in years,” he said.

The company has about 85 full-time equivalent employees, down from about 120 that it reported two years ago.

“As we became more focused, we downsized a little bit, but in the last several months, we have been growing,” Broome said.

The ultimate goal for Impact Makers is to return the value of the company to its philanthropic shareholders. That could happen in several ways, such as buying back shares or a sale of the company, Broome said, but no firm decisions have been made or when or how that will happen.

Broome said the company has been valued at about $18 million for several years.

“I think we would at least want to double that to $35 million,” he said.

“There is not a clear plan that in three years we are going to sell the company,” he said. “Now, we are more focused on the growth of the company and making sure we have a scalable model.”