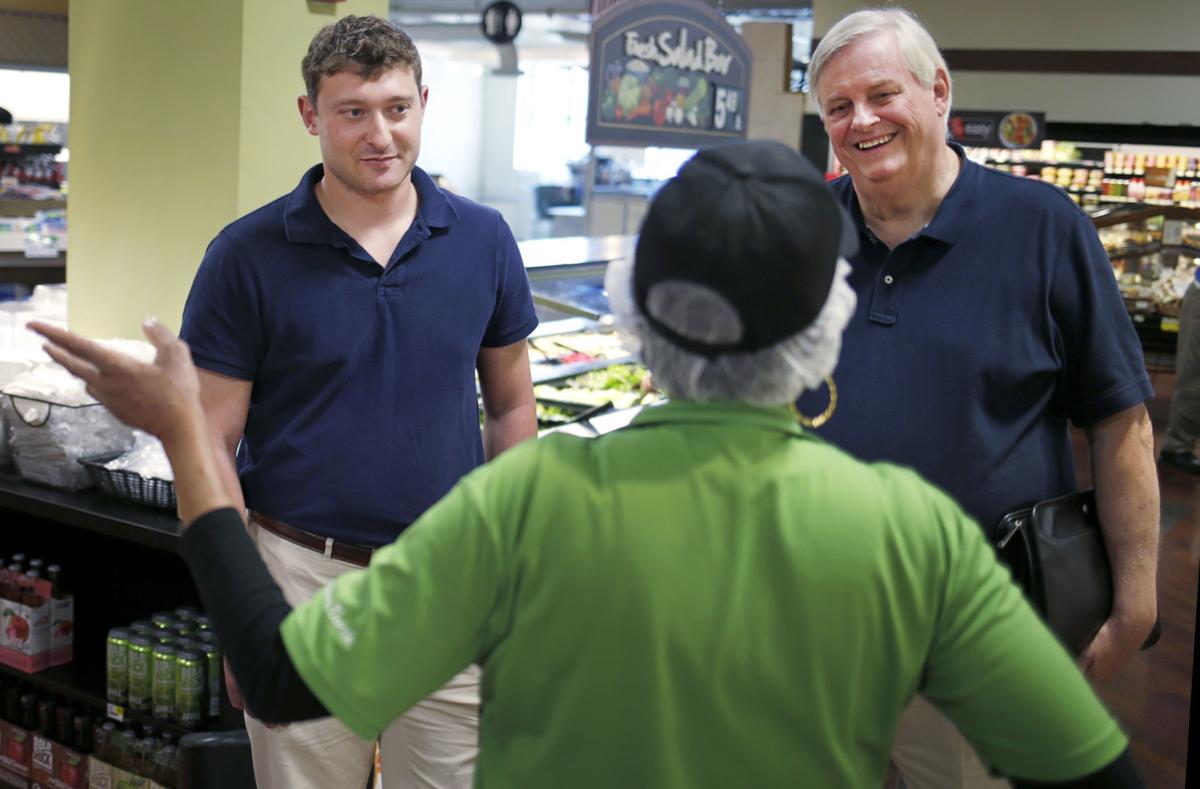 ABOVE: The deli manager at Farm Fresh in Shockoe Bottom talks with Raphael Strumlauf (left) and Kurt Wassenaar, owners of Neighborhood Grocery Holdings Inc., which is buying the store. BELOW: Farm Fresh on East Main Street will remain open and keep its name. 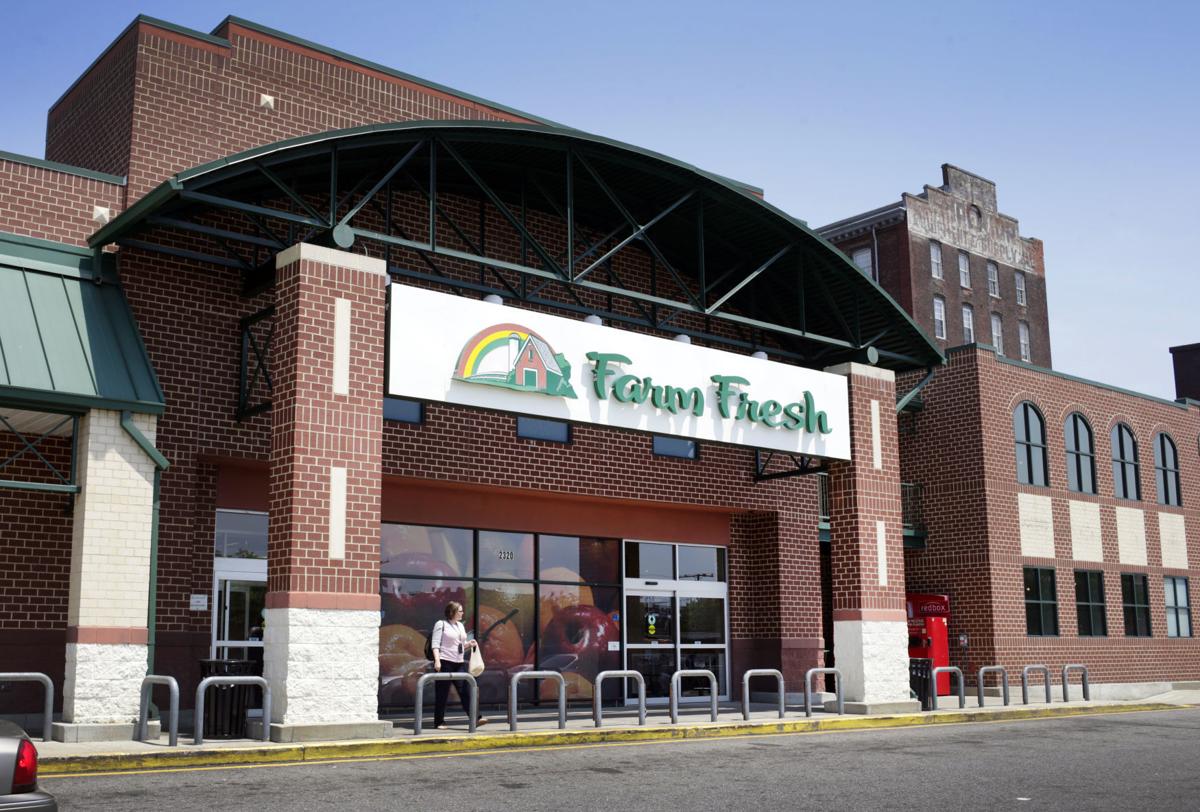 Charlottesville-based Neighborhood Grocery Holdings LLC will acquire the Farm Fresh grocery store on East Main Street, between 23rd and 24th streets, near the Tobacco Row development. Grocery wholesale distributor Supervalu Inc., which has owned the Farm Fresh chain since 1999, is selling the 37,000 square-foot store. The deal should be completed by the end of June. 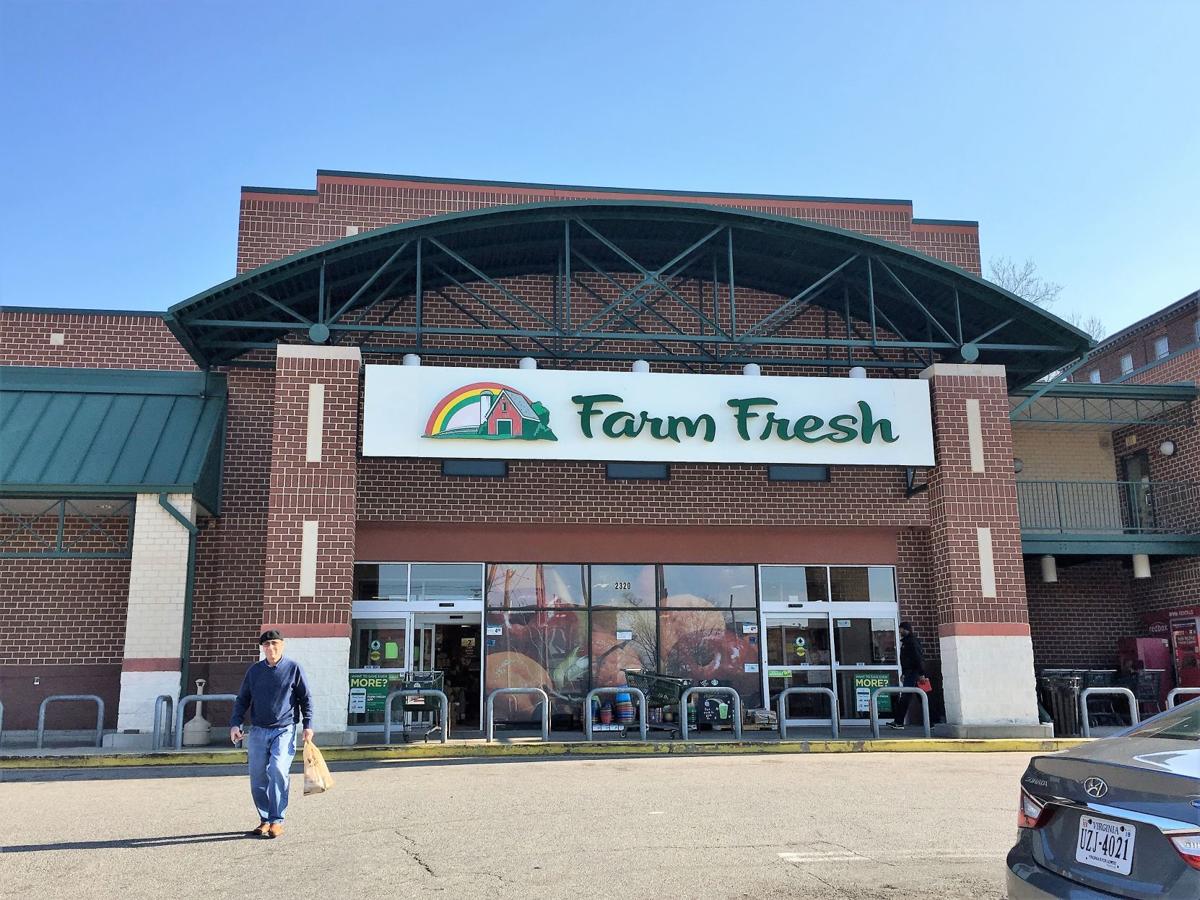 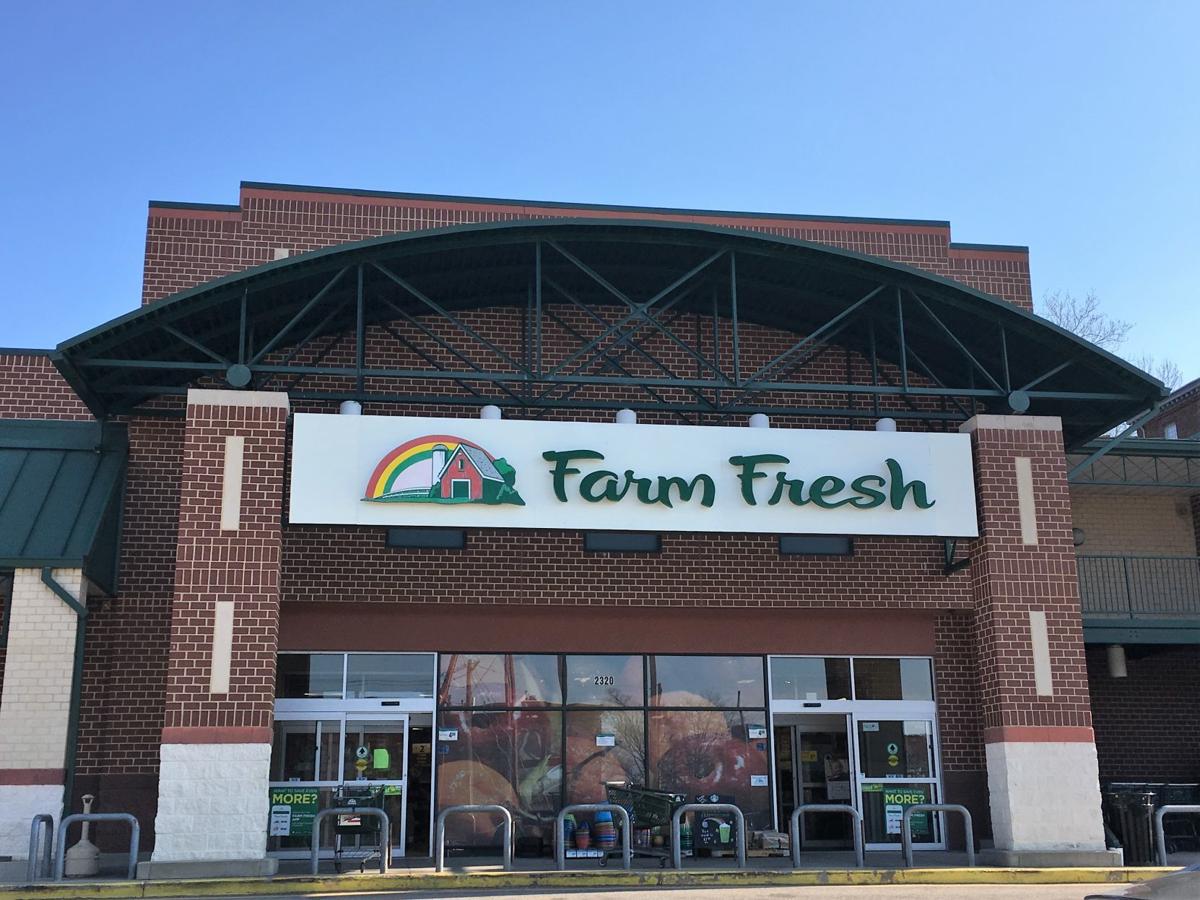 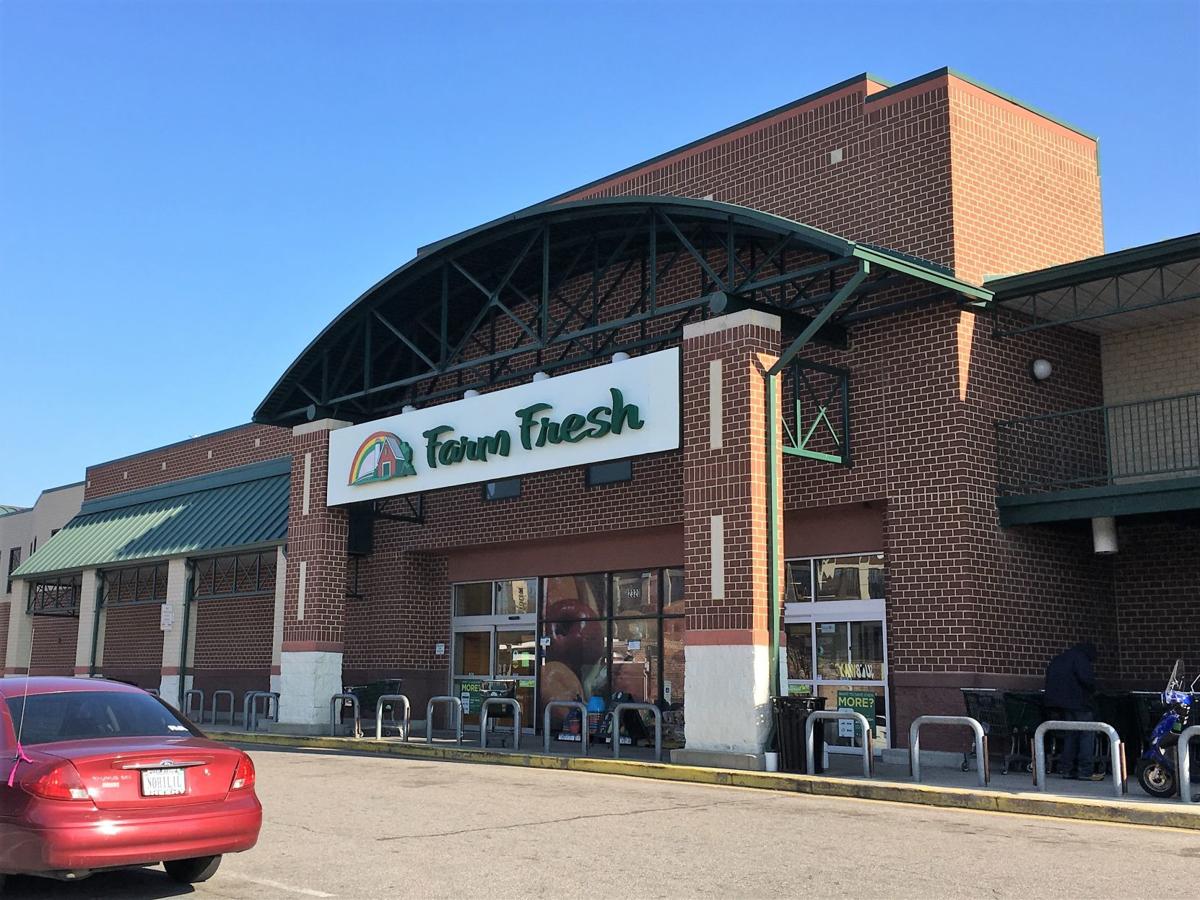 ABOVE: The deli manager at Farm Fresh in Shockoe Bottom talks with Raphael Strumlauf (left) and Kurt Wassenaar, owners of Neighborhood Grocery Holdings Inc., which is buying the store. BELOW: Farm Fresh on East Main Street will remain open and keep its name.

Charlottesville-based Neighborhood Grocery Holdings LLC will acquire the Farm Fresh grocery store on East Main Street, between 23rd and 24th streets, near the Tobacco Row development. Grocery wholesale distributor Supervalu Inc., which has owned the Farm Fresh chain since 1999, is selling the 37,000 square-foot store. The deal should be completed by the end of June.

A supermarket in Richmond’s Shockoe Bottom neighborhood will remain open.

The store, which initially was slated to close Monday, will continue to operate under the Farm Fresh name and the new owners will retain the 90 employees. The deal is expected to close sometime in mid- to late June.

“The opportunity came up and we looked at it and we fell in love with the store and the neighborhood,” said Raphael Strumlauf, Neighborhood Grocery’s managing director of operations. “We thought it was a great opportunity. It is a very interesting neighborhood. It [the store] fits in with what we like to do — to focus on communities.”

Few changes will be made to the 37,000-square-foot store, except the new owners plan to increase the number of specialty items and Virginia products, including meats, beer and wine, and local produce. They also plan to add more natural and organic products.

Plans are in the works to have a Blanchard’s Coffee Roasting Co. coffee shop take over the Starbucks location inside the store, which recently closed.

And the grocery store will continue to offer the ever-popular Farm Fresh fried chicken.

Neighborhood Grocery, which operates the Crozet Market and Market Street Market in the Charlottesville area, is buying the Farm Fresh store from the grocery wholesale distributor Supervalu Inc. The sales price was not disclosed.

Supervalu, which has owned the Farm Fresh chain since 1999, has been trying to find a buyer for 17 Farm Fresh locations after it said in mid-March that it was selling 21 of its 38 Farm Fresh stores for about $43 million in cash to three different retailers: Kroger’s Harris Teeter brand, Kroger brand and Food Lion.

Two of those 17 Farm Fresh stores — one each in Virginia Beach and Newport News — will be sold to an independent operator. Eleven stores have closed, and Supervalu is keeping three other Farm Fresh stores open as it tries to find buyers for those locations.

The Farm Fresh store in Shockoe Bottom is the only Farm Fresh location in the Richmond area. All of the others are in the Hampton Roads, Newport News and Williamsburg areas.

Jeffrey W. Metzger, publisher of Food World, a Maryland-based publication that follows the grocery industry, said operating the Shockoe Bottom location will be a challenge.

“They are in a good location and at least they are in an area that is not over stored,” Metzger said. “On paper, they will have a shot at it, but it won’t be easy. It is a competitive industry with low margins, but also these guys will be competing in a new market.”

Strumlauf realizes he is making a big leap in buying the Farm Fresh store, but his two other markets have some similarities with the one in Shockoe Bottom — all are in areas that require heavy customization based on customer requests.

“We will be tailoring it and making it hyper-focus on the community,” Strumlauf said about the new store.

The Richmond Farm Fresh store also is the biggest supermarket that Strumlauf has operated.

The 3,500-square-foot market does a big deli business, he said.

The Crozet Market is 20,000 square feet and is a full-service grocery store. It specializes in meat and produce departments, Strumlauf said.

Strumlauf partnered with Mark Green and Kurt Wassenaar, both real estate owners and developers, in acquiring the Crozet Market in November 2016.

Strumlauf, Green and Wassenaar are the owners behind Neighborhood Grocery.

The Farm Fresh store in Richmond generated $6.1 million in the 12 months that ended March 31, 2017, according to Food World’s annual grocery market analysis of food sales. But Strumlauf disputes those figures.

Strumlauf and his partners decided to keep the Farm Fresh name to make a quick and smooth transition.

“We don’t want to slap on a new name on the store and everything else is the same,” Strumlauf said. “We may move to a different name in time, but if you change the name you want to do it right. We want to have a quick, smooth transition and then have the time to think about it and rebrand long term. It is something we will revisit again.”

Farm Fresh had operated stores here since the 1970s, first as Farm Fresh and then in the 1990s as The Grocery Store. Those stores were sold in 1995. It continued to run three area Rack & Sack stores until 1999.

Supervalu picked up the Farm Fresh chain as part of its $1.5 billion acquisition of Hanover County-based Richfood Holdings Inc., then the nation’s fourth-largest grocery distributor and the largest in the Mid-Atlantic.

Farm Fresh returned to the Richmond market in 2004 by taking control of the Shockoe Bottom location at the request of Supervalu.

The store had opened in January 2003 as The Market at Tobacco Row, the much-anticipated supermarket created by minority business owner Johnny Johnson’s Marketplace Holdings Inc. By April 2004, Marketplace Holdings closed that store and its other Community Pride locations because of financial problems.

Supervalu signed a 20-year lease for the space in 2003. It had subleased it to Johnson’s company.

Go figure that only a couple years after I move out of Church Hill they decide to put my favorite local coffee in what was my old grocery store.