An artist’s rendering shows how the entrance of the Haynes Furniture store on Hull Street Road in South Richmond will look after renovations. 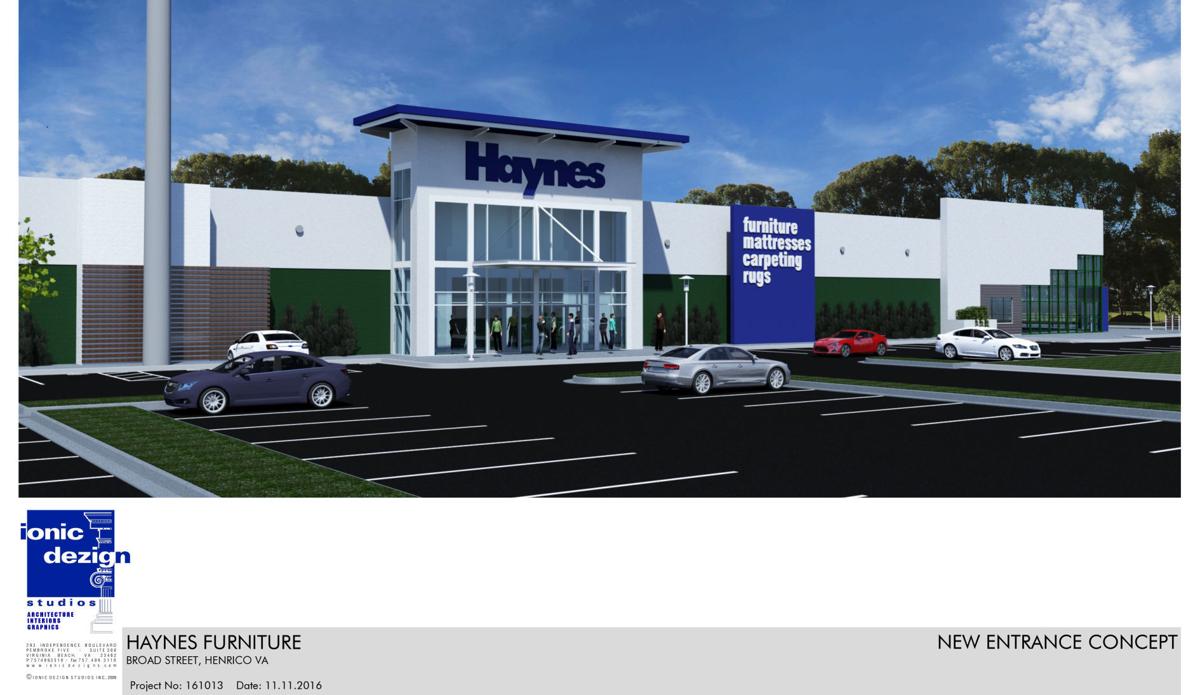 Rendering of the entrance to the Haynes store on West Broad Street in Henrico County.

An artist’s rendering shows how the entrance of the Haynes Furniture store on Hull Street Road in South Richmond will look after renovations.

Rendering of the entrance to the Haynes store on West Broad Street in Henrico County.

Work has already begun on the stores at 6550 Hull Street Road near Chippenham Parkway in Richmond and at 9515 W. Broad St. in western Henrico County.

The projects are the largest renovations in the company’s 120-year history, said E.J. Strelitz, president of the Virginia Beach-based retailer.

The cost of the renovations is in the millions, said Randi Strelitz, the retailer’s executive vice president and E.J. Strelitz’s wife.

One of the warehouses at the 16-acre Hull Street Road site will be demolished, she said.

“We have two warehouses attached to our store, but they haven’t been used because we moved our distribution center to Williamsburg years ago,” she said.

The work is expected to be completed in 2019 when Haynes will introduce a format that offers curated quality and style with volume discount prices, hoping to appeal to millennials and a re-emerging strong middle class in Richmond, the company said.

“We believe in Richmond, and we believe in the furniture business. We think that there is a lot of growth even with ... online. Actually, we have just started our own e-commerce for The Dump and are about to go live with Haynes in the next couple of weeks. We believe in brick-and-mortar and we believe in online,” she said.

Haynes has hired Ionic DeZign Studios of Virginia Beach for its store designs. Construction will be managed by M.L. Bell of Ashland.

Family owned and operated, Haynes’ flagship store is in Virginia Beach and it also has a store in Newport News.

I keep t;thinking they are going out of business because they always say the Biggest Sale in Its History....and we will never do this again...and so on and so on...

I think the same thing every time I see a Jos A Banks sale announcement.

I think the same thing every time I see a Jos A Banks sale announcement.