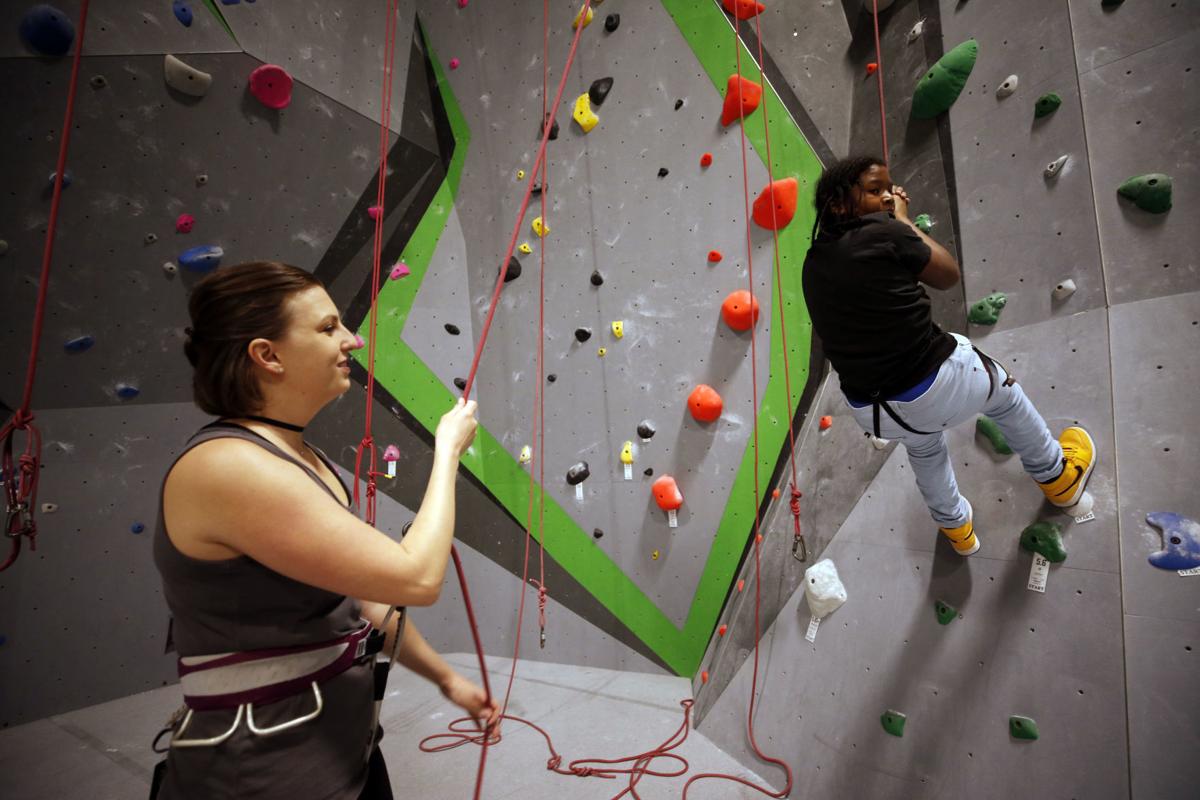 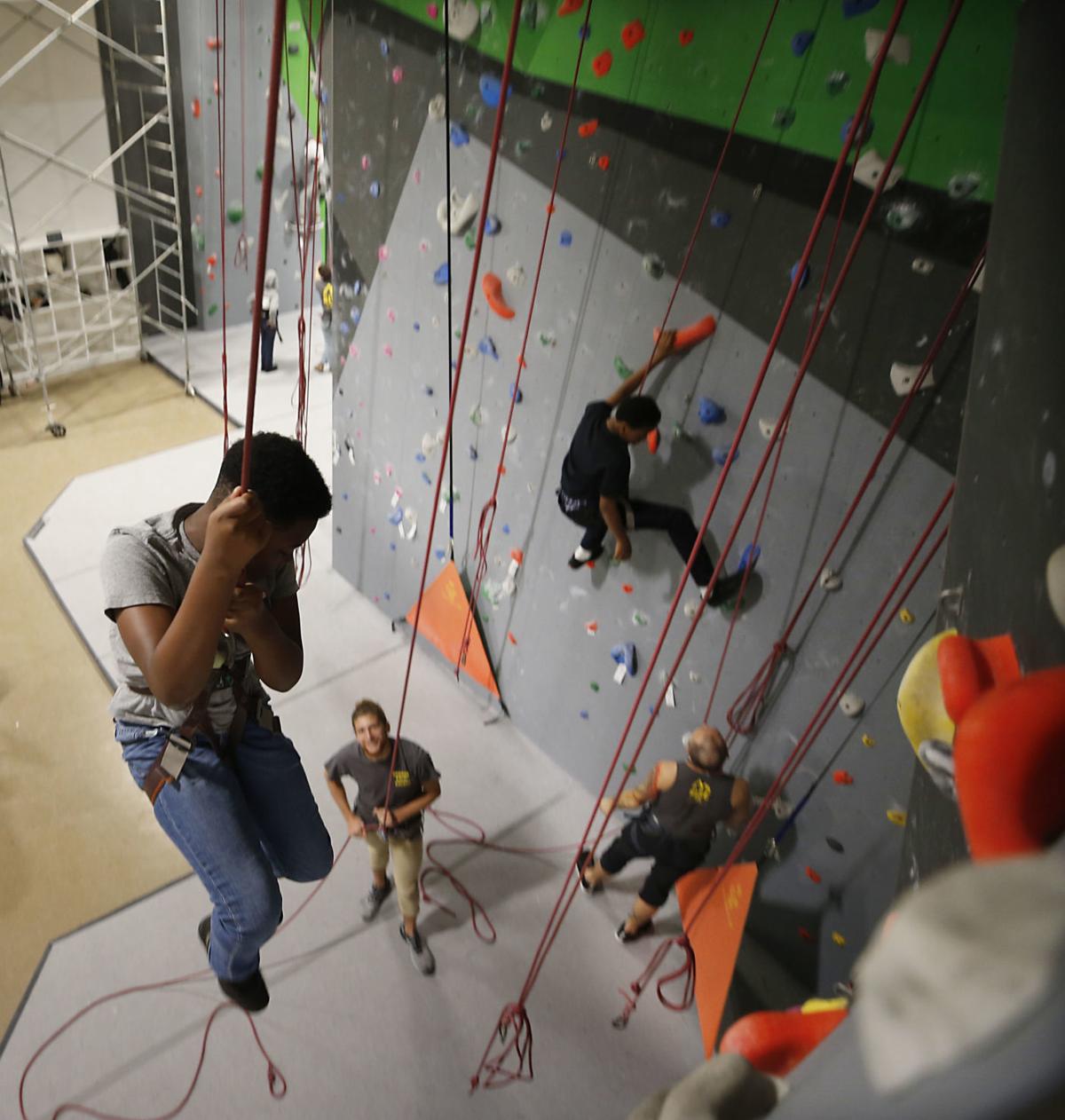 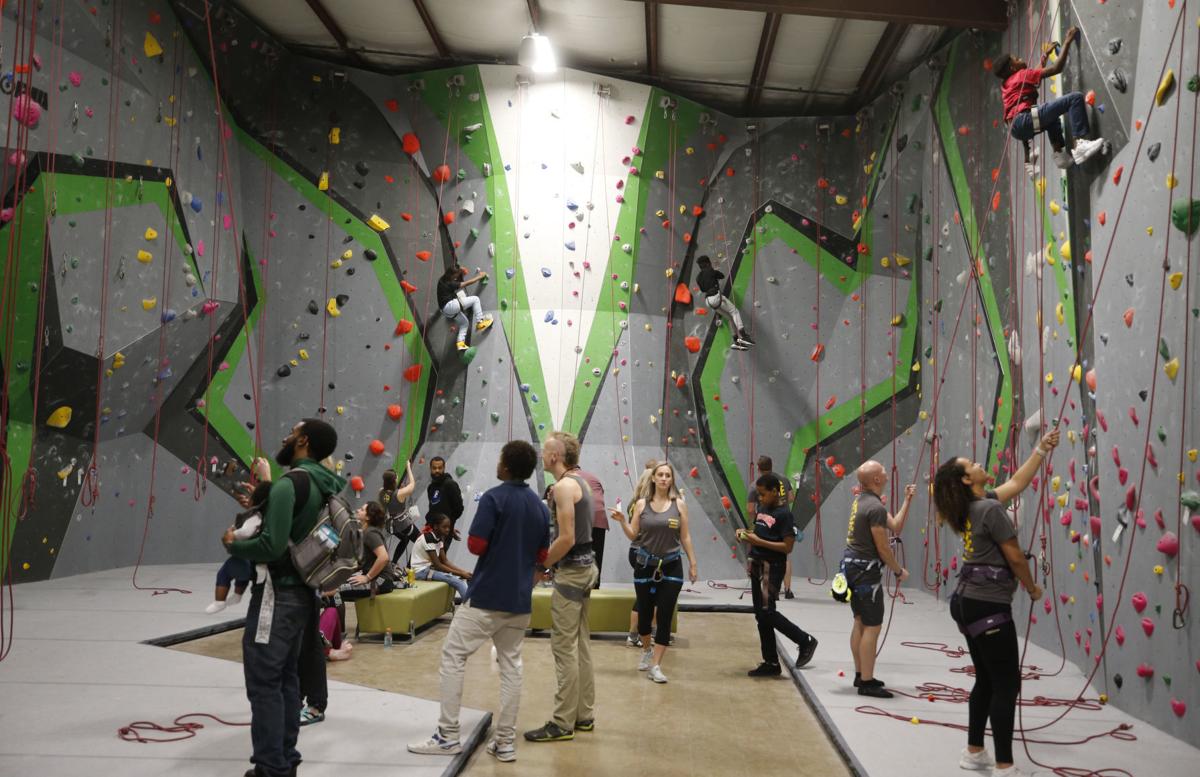 Martin Luther King Jr. Middle School students take part in a session at Triangle Rock Club. The weekly outings to the venue for students from MLK and Albert Hill middle schools are organized by WeRiseRVA, a nonprofit that wants to expand the program next year to include other Richmond-area middle schools. 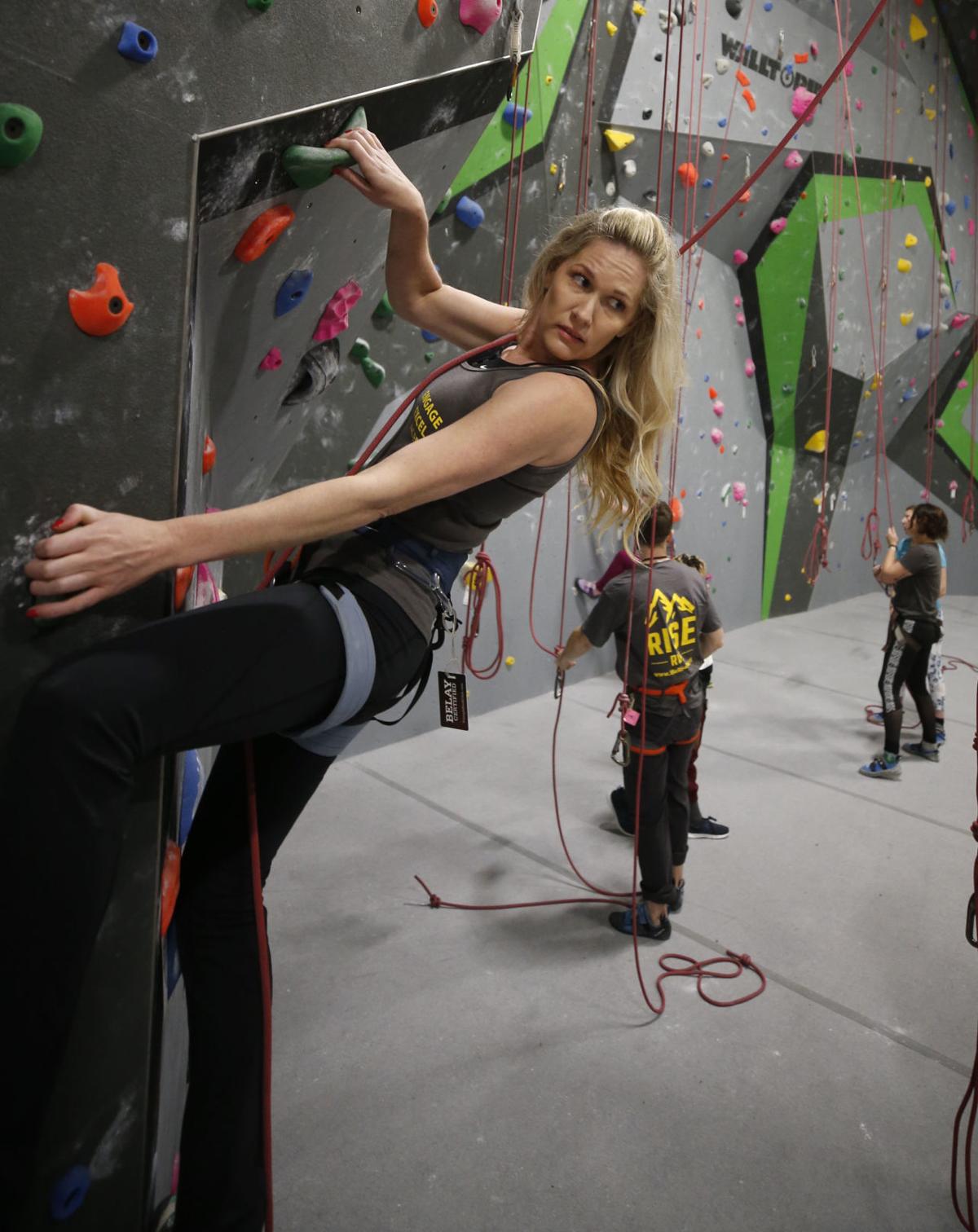 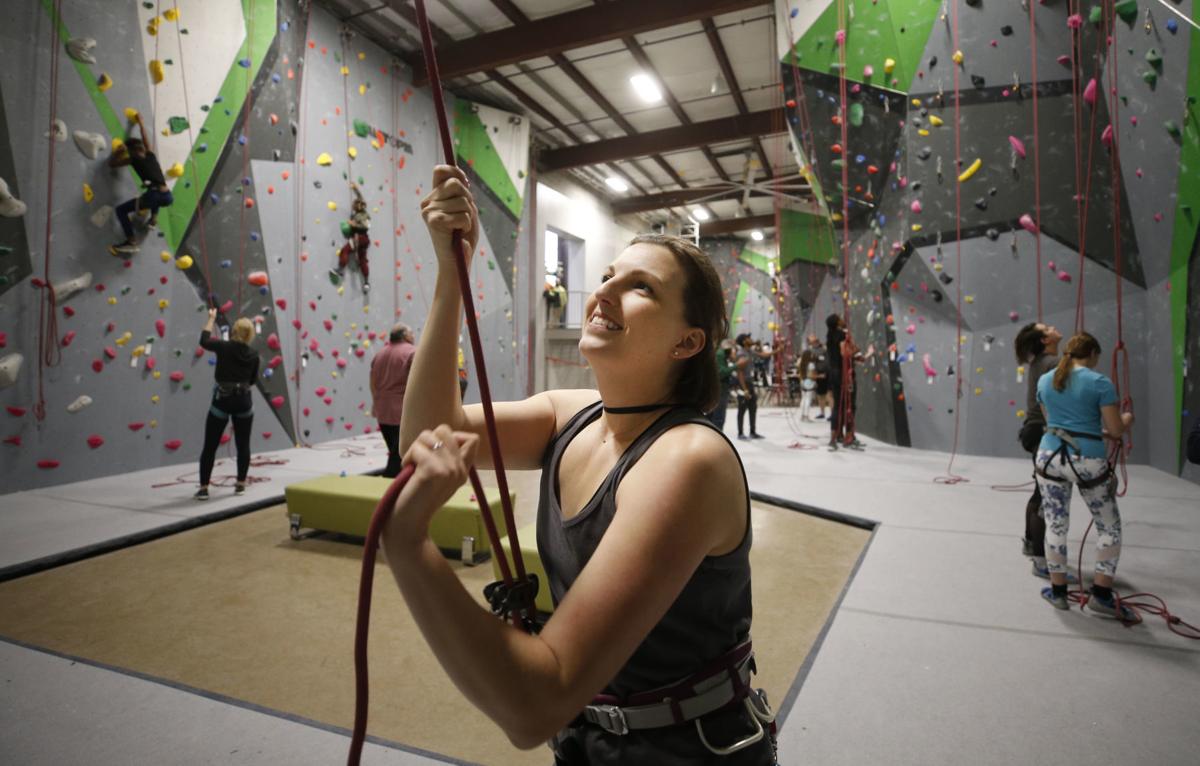 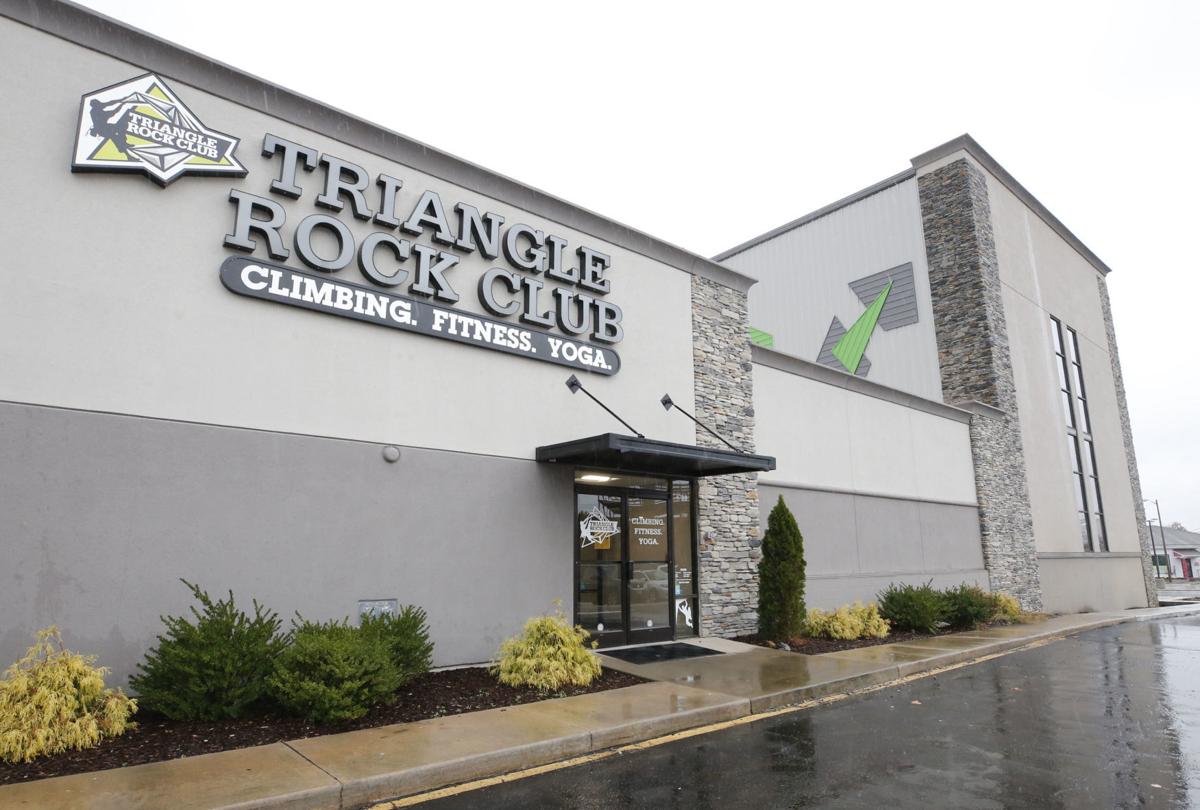 Martin Luther King Jr. Middle School students take part in a session at Triangle Rock Club. The weekly outings to the venue for students from MLK and Albert Hill middle schools are organized by WeRiseRVA, a nonprofit that wants to expand the program next year to include other Richmond-area middle schools.

Before they arrived at Triangle Rock Club in Henrico County on a rainy Tuesday morning earlier this month, some of the students in teacher Christopher Glasper’s sixth-grade math class were apprehensive.

“Some of them came to me and said, ‘I don’t want to try it. I am scared of heights,’” Glasper said.

The class outing would be the first time many of the 20 students from Martin Luther King Jr. Middle School in Richmond’s East End had tried indoor rock climbing, a jitters-inducing challenge on the first try even for most adults.

Once they got to the indoor rock climbing facility off Thalbro Street, though, the students were soon tackling some of the toughest, scariest walls.

Outfitted in climbing gear, with adult volunteers belaying them — securing the ropes so they wouldn’t fall — some students were reaching the top of the 27-foot climbing walls rather quickly.

“I tried other walls, but that was the first one I ever climbed all the way to the top,” said Khloe Hill, her hands covered with chalk after successfully summiting one of the courses up the walls.

“My hands were hurting, but I had fun,” student Courtney Carter said.

“If you’re not sore, then you are not climbing,” volunteer Josh Alderson added.

The weekly outings to Triangle Rock Club for students from MLK and Albert Hill middle schools in Richmond are organized by WeRiseRVA, a nonprofit organization established this year to provide indoor rock-climbing experiences for Richmond students.

Even Glasper, known to his students as “Mr. G,” tried some climbing.

“Most of the athletics they [the students] get to do is basketball or football, so for them to see this broadens their horizons,” Glasper said. He encouraged the students to tackle the wall like they would a math problem: methodically, one step at a time, with concentration.

On this particular Tuesday, the students also got some extra motivation from a special guest, Richmond native and former NFL wide receiver Billy McMullen, now an inspirational speaker who was also trying rock climbing for the first time.

“It is one of the best mental and physical things I have ever done,” said McMullen, who gave the students an inspirational speech as they were enjoying a lunch from Chick-fil-A after the rock-climbing session. “You think you can just power up the wall, but it is all about strategy and mental toughness, all the things I teach.”

WeRiseRVA was organized by a group of Richmond-area professionals who share a love for rock climbing and wanted to provide that experience to children who otherwise might not get the opportunity. The entry-level climbing program introduces students to the fundamentals along with team-building skills.

The nonprofit’s president is Annette Bennett, CEO of Clinical Research Partners, a Richmond-based clinical trials company she co-founded in 2011.

Bennett said she fell in love with rock climbing after the company had a team-building outing to a rock-climbing facility in 2018. This year, she and Allen hatched the idea of WeRiseRVA as a way to give back to the community.

“We did everything to launch this nonprofit in less than a year,” Bennett said.

“I wanted to have something that I could do with the kids — something I love,” Bennett said. “With every climb, it is a mental, physical and emotional balance. You are telling yourself as you are going up with wall, ‘I can do this. I can achieve my goal,’ and you have someone belaying you that you trust — someone who has your back.”

The vice president of the nonprofit is Seth Henshaw, a nuclear physicist who brings to the organization 20 years of climbing experience, including some outdoor climbing challenges such as the 3,000-foot nose of El Capitan in California.

“I think rock climbing is a great normalizer,” Henshaw said. “Everybody can rock climb, so even the youngest, smallest kid and the biggest, oldest kid climb about the same at this age, so you can have a 10-year-old beating a 14-year-old.”

WeRiseRVA currently has 30 volunteers who are certified in belaying. The nonprofit is offering rock-climbing outings to students from two Richmond middle schools, but Bennett said the organization wants to expand the program next year to include other Richmond-area middle schools.

The venue, Triangle Rock Club at 4700 Thalbro St., opened in March. It is the first Virginia location and fourth overall for North Carolina-based Triangle Rock Club, whose mission statement is “to transform and enhance the lives of others by enthusiastically sharing our passion for climbing and fitness.”

“The facility is not used heavily during the weekdays, so if we can figure ways to partner with local organizations to use the facilities and to help move people’s lives forward, we clearly want to do that,” said Joel Graybeal, Triangle Rock Club’s managing partner.