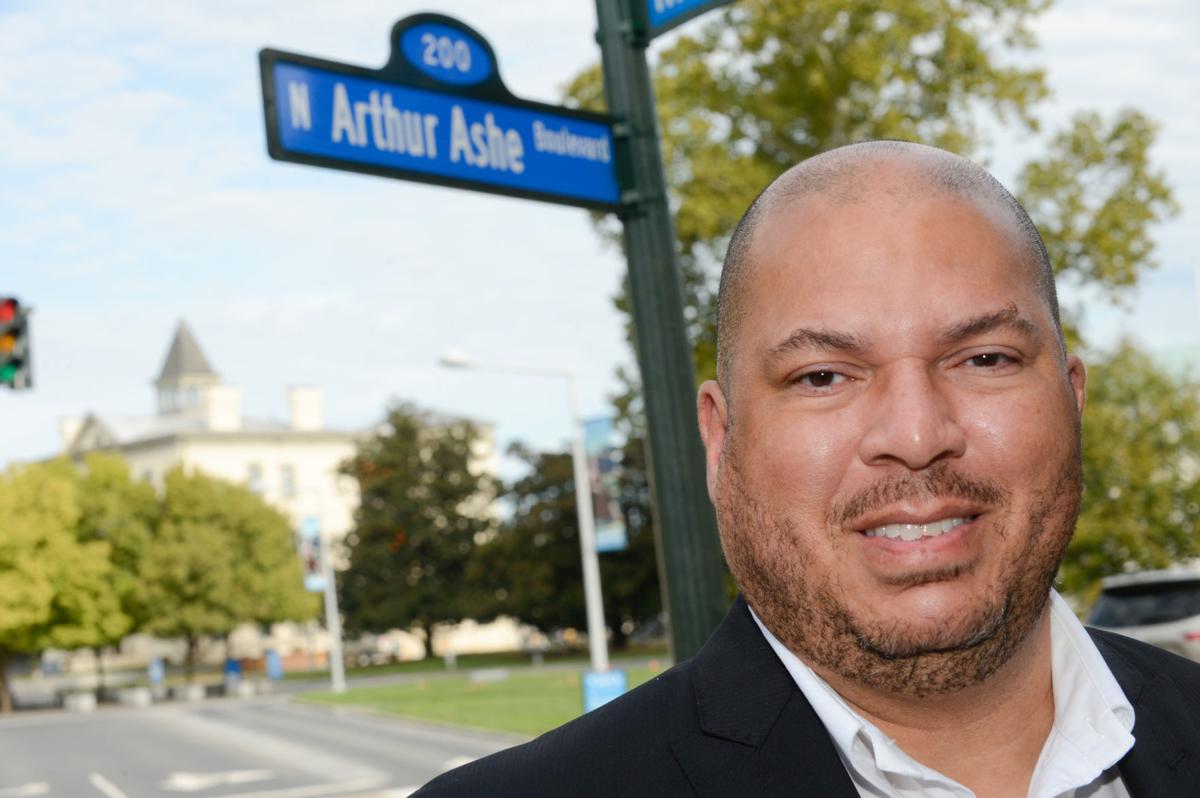 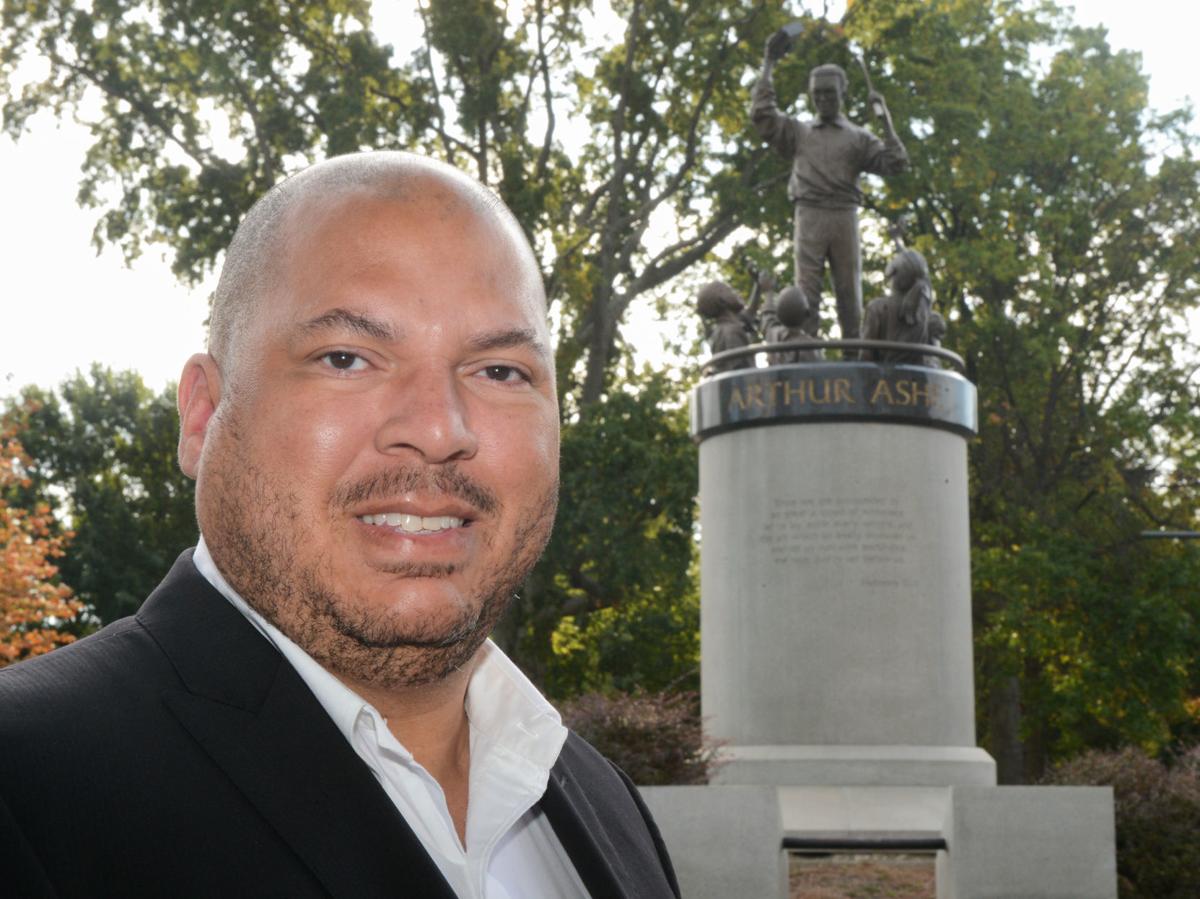 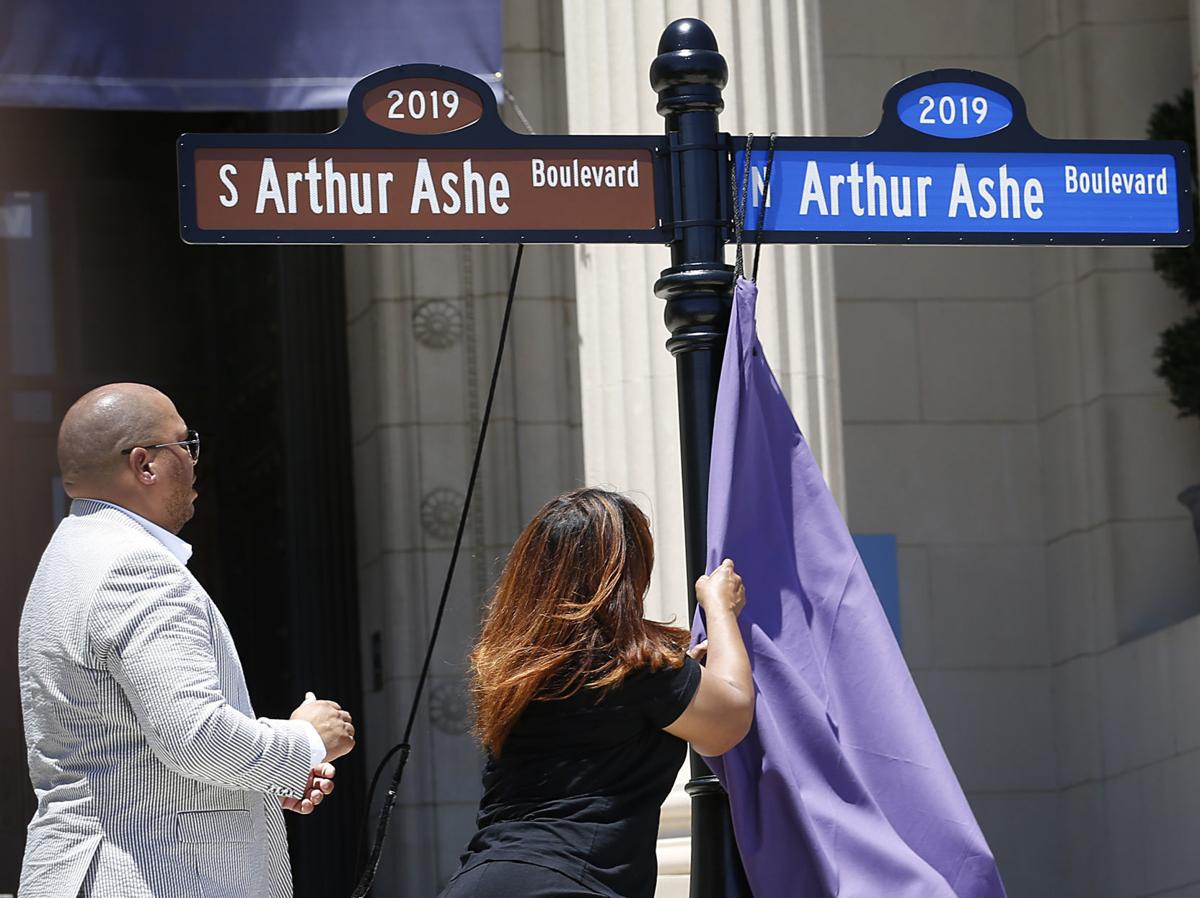 David Harris, Jr., who is Arthur Ashe’s nephew, watched Richmond City Councilwoman Kimberly B. Gray unveil an Arthur Ashe Boulevard sign during a street renaming ceremony at the Virginia Museum of History and Culture on June 22. The roadway had long been known previously as simply the Boulevard.

David Harris, Jr., who is Arthur Ashe’s nephew, watched Richmond City Councilwoman Kimberly B. Gray unveil an Arthur Ashe Boulevard sign during a street renaming ceremony at the Virginia Museum of History and Culture on June 22. The roadway had long been known previously as simply the Boulevard.

David Harris Jr. said he never felt pressure to live up to his uncle's legacy. But he has honored it in a way that, like his uncle, will transcend time.

Harris was a freshman at Virginia Union University in 1993 when tennis champion, humanitarian — and favorite uncle and mentor — Arthur Ashe died at age 49 from AIDS-related pneumonia. While eulogizing Ashe at his funeral, Harris was overwhelmed with grief. Each time he stopped, the congregation burst into an applause of encouragement and consolation.

In 2019, the applause for Harris — and Ashe — was of a different nature. And so is the tribute to his uncle that Harris helped fashion, one that would speak louder than any words he might have spoken. You see it on the newly minted signs proclaiming Arthur Ashe Boulevard, the Richmond thoroughfare that leads to the tennis courts from which a young Ashe was barred by the color of his skin.

"Our purpose was to educate and to elevate Richmond to a higher level, to a higher presence in the world," Harris said. "And that's where our hearts were."

The idea of renaming the Boulevard for Ashe, first floated shortly after his death, had gone nowhere on two previous occasions. But Harris — principal member of the Arthur Ashe Boulevard Initiative — was convinced that the world needed to know further that Richmond had more to offer than Civil War history.

"We did our best not to carry any doubt, because we had the right purpose behind it," Harris said, crediting friends J. Dontrese Brown, Baxton Baylor and Andre Johnson with helping to shepherd through the renaming.

Harris attributed the City Council's approval to a changing landscape, leadership and attitudes.

When he approached City Councilwoman Kimberly Gray about the proposal, "we both realized that the odds of success would be daunting," said Gray, whose 2nd District includes part of the Boulevard. "David’s role throughout the public engagement process was crucial in assembling a broad coalition of supporters and advocates who spoke eloquently about how meaningful Arthur Ashe Boulevard would be to them."

Harris grew up in Glen Allen and graduated from Henrico County's Hermitage High School, where he was on the tennis team. Ashe had introduced him to the sport, but "he actually tried to ask me about playing baseball or golf," Harris recalled.

Harris attended the high-profile Florida academy run by tennis coach Nick Bollettieri, and he played on a partial scholarship at VUU under John Watson, a language professor and tennis coach for 47 years.

He earned a degree in banking and finance, and today he helps run Liquid Inc., the family concrete and excavation business in Richmond's Fulton area. Harris teaches occasional tennis lessons and does what he can to support the Metro Richmond Tennis Club.

Arthur Ashe Boulevard is not an exit ramp for Harris, who with others has established a foundation to facilitate social justice, education, youth sports and economic development through partnerships with other philanthropic organizations.

"This allows us to have conversations that we were not [having] in the past," Harris said. "I'm going to be strategic in what I do decide to embark upon, not just be all over the place. I want to be focused ... to be effective."

Still, there are moments when he basks in the realization of a long-held dream — and what Arthur Ashe Boulevard could mean for his hometown.

"There is a different energy, I think, now on the Boulevard when I go down there," Harris said.

In the next five years, he foresees less division and greater growth and success in Richmond, a culmination of the civil rights movement of Ashe's generation.

That movement was "looking to snatch down signs over water fountains," Harris said. "And this one right here was literally changing signs on the highway."

IN HIS WORDS: DAVID HARRIS JR.

We asked Harris to write a letter to his late uncle Arthur Ashe.

Peace! It’s been quite some time since we’ve written. Something tells me you knew that already, according to my faith.

Since your passing, many things have occurred in this world — some impressive, some not so much. Everyone in the family has experienced some level of success and prosperity.

As for me, I’ve had many starts and stops over the years since you passed. I didn’t quite accomplish finishing that college degree in four to five years. I did, however, finish it about 10 years ago, while studying simultaneously to become a deacon in my church. I guarantee that’s not something you expected.

I finished school where I started — at an HBCU — because it was imperative. I had a son watching me, in the same manner I watched you, your father and mine. Being a role model is something that I’ve been cognizant of, given that young males do pay attention to stellar examples of black men. I had three pairs of footprints to follow, and for that I’m grateful.

It’s interesting I’m writing this letter to you now, seeing as I embarked upon a monumental opportunity to make change in our hometown. We literally gave a street with no name ... yours. We got support from your old friends, brothers in arms, fans and new allies.

Introducing you and the things you stood for — to a new generation and some old — is an accomplishment not easily realized. We're not fully aware of the long-term impact of this undertaking, but improvement of lives remained our focus, regardless of background.

Since June 22 this year, we’ve experienced conversations once not had — like a silence broken. The dedication ceremony was spectacular and was becoming of a city ready to embrace, and be leaders of, change.

Our focus for championing this change has been the youth of the city of Richmond. There are simply some things we must not leave for them to build, do or correct. We used your blueprint of fostering hope, humanity, service and love to impact the community.

Several months after the official renaming ceremony, Richmond’s citizens are still getting used to seeing signs and addresses featuring Arthur Ashe Boulevard. I often receive emails or am tagged on social media posts by people who have taken pictures of the signage, or who want me to know that seeing the new street name has inspired them about Richmond’s ability to become a progressive city that embraces — and cares about — all of its citizens.

From my vantage point, and I hope yours, this is a bigger opportunity than just to honor you for the legacy you left. It’s an opportunity to remind everyone what you stood for and how we can carry forth that message and mission.

That, sir, is my intent. Stay tuned, and thank you again for the excellent footprints you left me to follow.