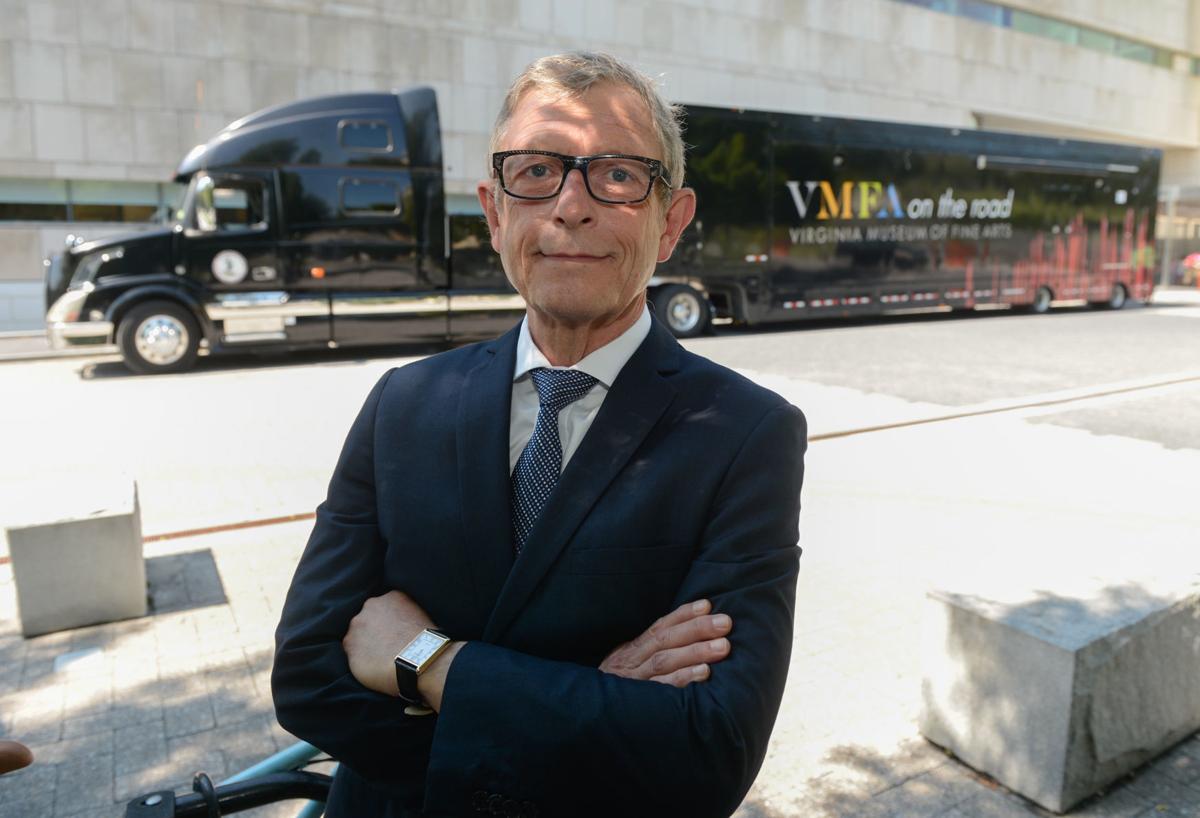 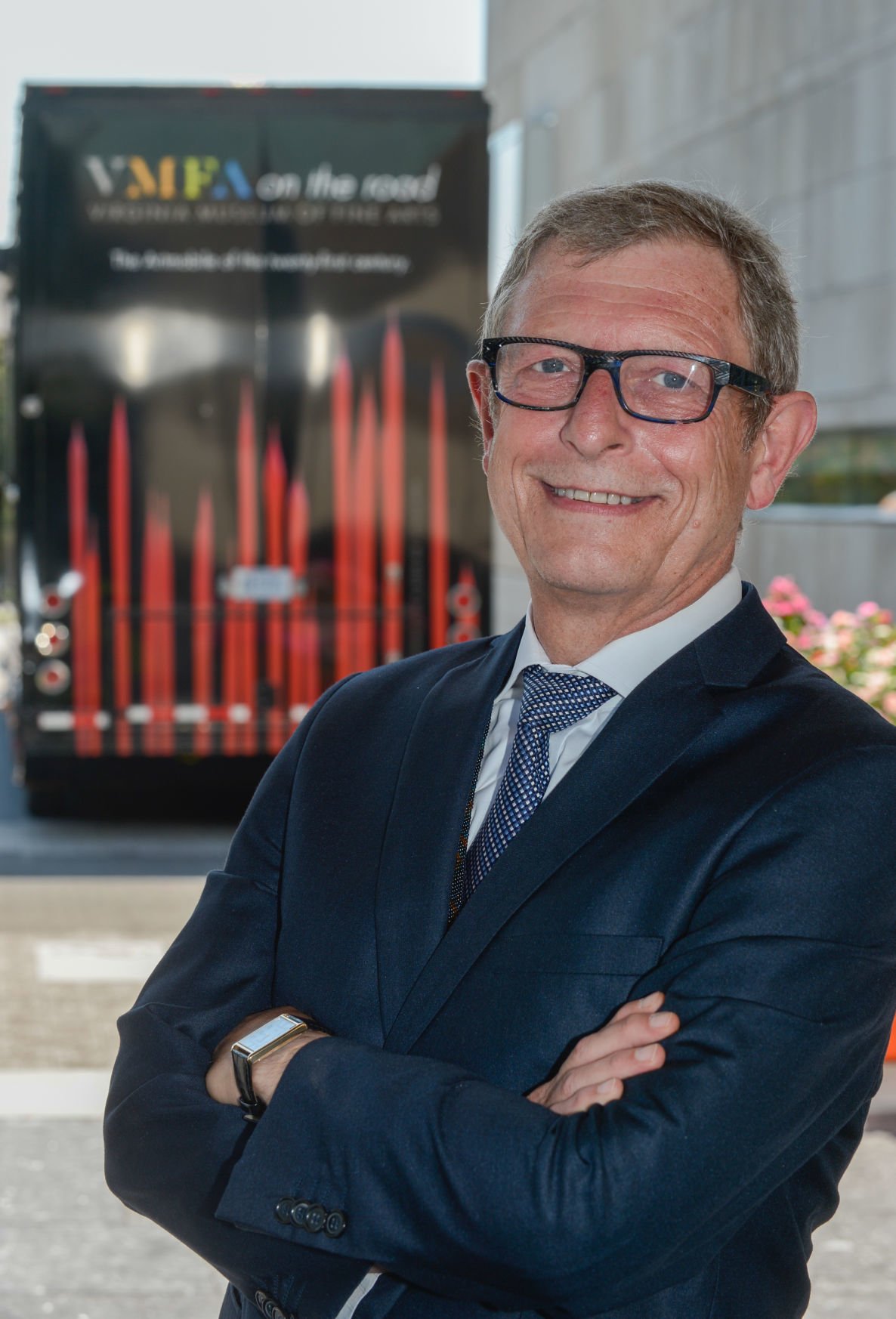 The Virginia Museum of Fine Arts is full of masterpieces and striking works – from bejeweled Fabergé eggs to the dramatic "Chloe" sculpture that graces the grounds. But from its priceless collection, the element with the greatest reach isn't a painting or a bronze.

It's a guy from Saltville – and, now, the truck he brought back to life.

To the farthest reaches of Virginia, the man who embodies the VMFA is Jeffrey Allison. For more than 20 years, the manager of statewide programs and exhibitions has been spreading the museum gospel. And in 2019, he marked the first anniversary of one of his greatest works: the new incarnation of the Artmobile.

Allison grew up in Southwest Virginia, so he knows the feeling of isolation – and how powerful access to art can be.

"The Virginia Museum of Fine Arts has been in my life since I was 6 years old and went to the Artmobile in Saltville," he recalled. "My aunt said, 'Jeffrey, we’re going to take you to a museum.' I went to get my suitcase. Instead, there was this giant truck – with paintings."

The Artmobile is just one aspect of Allison's outreach. When he began to work for VMFA's statewide program in 1997, his focus was on establishing partnerships with local educational and cultural institutions. He started with 32 – and now has more than 1,100.

“Everywhere we went, we learned very quickly that Jeffrey had a fan club," Nyerges said. "He was the face of VMFA in places from the Valley to Southside to the Eastern Shore to Southwest Virginia and, frankly, every point in between. ... Jeffrey is literally personally responsible for why we are so successful in our statewide efforts.”

Statewide success even inspired a bump in state contributions to the museum budget to support such initiatives. Those include live-streaming interactive programs for distance learning, as well as “VMFA on the Road: An Artmobile for the 21st Century.”

The first Artmobile launched in 1953, and it reached more than 2½ million people before being discontinued in the 1990s amid concern about safely displaying the works. To create a new Artmobile, Allison repurposed the traveling HistoryMobile from the state’s 150th anniversary commemoration of the Civil War.

He said “we had to start from the bottom up” to install climate control, lighting and security on a $500,000 budget. Once done, he had only two weeks to get the 53-foot-long show on the road.

“It was like putting on a Broadway play in a barn, to get everything installed,” Allison said.

The inaugural exhibition showcased artists who had won VMFA fellowships (as Allison did in pursuing undergraduate and master's degrees in photography). They included painters Benjamin Wigfall and Cy Twombly, and photographers Sally Mann and Emmet Gowin.

In the year since its October 2018 launch, the new Artmobile attracted about 100,000 visitors. The next exhibition, featuring landscapes of Virginia, will get rolling in spring 2020.

"People love it," Allison said. "It’s achieving its mission. It’s been all over the place. ... Everyone around the state is excited.”

"Contact with a museum in the form of the Artmobile is fantastic,” she said. “It’s a gift to the community, to the state, to the country.”

So is Allison. Norfolk photographer Glen McClure met him almost 20 years ago while preparing to exhibit at the VMFA. He put it simply: "To most people, Jeffrey is the Virginia Museum of Fine Arts."

IN HIS WORDS: JEFFREY ALLISON

After graduate school, my dream came true: I was a full-time professor of photography at a college. Several years later, though, a dramatic drop in overall enrollment caused a number of us to lose our jobs.

I spent a year helping one of my students open a restaurant, where I was most often the dishwasher or line cook. I learned that I got as much joy out of doing my daily work in that kitchen as anything. (The food was great as well!)

One Saturday, a former student came in with her parents. She was so excited to introduce me – while I stood in my apron – as a teacher who had made an impact on her. I think this gave me the ability to start my art career over and end up where I am today.

I own my grandfather’s camera, a Kodak from the 1920s. I also have many of the photographs he made of his family and the area around his farm. As a photography historian and photographer, I love having that connection to him through a shared passion.

I would become a lawyer. I’ve served on the board of the Virginia Poverty Law Center and worked with them for many years. I would love to give back by advocating for low-income Virginians, as well as working with legal aid societies and others on issues such as elder and consumer rights and fighting domestic and sexual assault.

My dad was a wounded veteran of the Korean War. When he returned home, he started working in the local plant, still wearing his Army boots as work boots. Only three weeks or so into work, he suffered an accident. He was rushed to the emergency room, where doctors had to amputate his right arm.

As he recovered, he did not leave his hospital room until he could tie those Army boots on his own. Three weeks later, he returned to the hospital with a bouquet of flowers to thank the nurse who helped him through it all. That was my mother, who was working in surgery the evening of his accident.

My dad returned to work, he and my mom married, and I came along. As a child, it never occurred to me that my dad looked different to other people. Every day, in every small way, my father showed me that no matter what the challenges are in life, you can overcome them.

He taught me so many things – from throwing a baseball and playing pool to walking with my head held up and a smile on my face to greet the world. All of those small moments contributed to who I am today.

Although I have had a number of amazing role models, I would say my high school art teacher, Raymond Farris. For a small town, we had an amazing high school, and Mr. Farris taught an amazing array of art classes, from painting and sculpture to photography. He saw something in me, and I ended up taking every class he offered.

I watched how he worked with an incredibly diverse group of students to get the best out of all of us. He was patient, kind and passionate about the arts. I often visited him after I graduated and watched as he continued to raise a new generation of artists, people interested in art and people who aspired to always do their best.

What is your favorite TV program?

The 1967 British program "The Prisoner," starring Patrick McGoohan, was a sort of sci-fi spy series set in a mysterious village. Each episode, "Number Six," played by McGoohan, struggled to figure out why he had been sent there, what government might be in charge and how to escape.

It’s amazing how many of the technological devices in the show are now in use. Each episode began with Number Six proclaiming, "I am not a number – I am a free man!"

The Sherlock Holmes books were the first I learned to read, and that character – whether in the books, movies or television – has always been with me. I am sure I would seem as befuddled as Dr. Watson, but it would be great to solve a mystery with Mr. Holmes.

While my family is well aware of this, I love to cook most nights and every weekend. I like to cook from scratch. According to my family, I make the best crab cakes they have ever had.

The love of cooking also means I spend too much time watching cooking shows on PBS and all the rest.

Visit the VMFA, of course! When people from out of town visit, I usually take them on a driving tour of the amazing array of neighborhoods and historic sites here. We would end up at one of the many great restaurants for drinks and dinner, preferably with outdoor or rooftop seating.

Under the skin, we are all one family. Although, like most families, we often disagree, at the end of the day, we should love and respect each other.