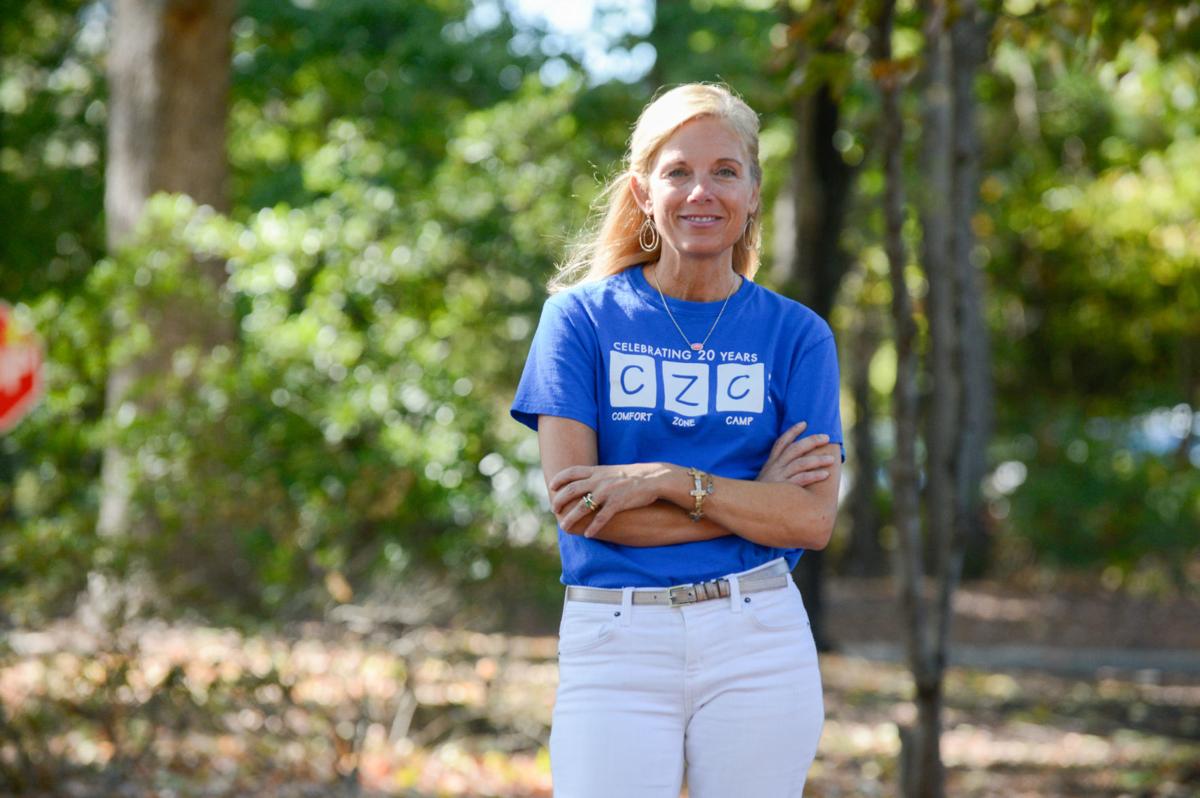 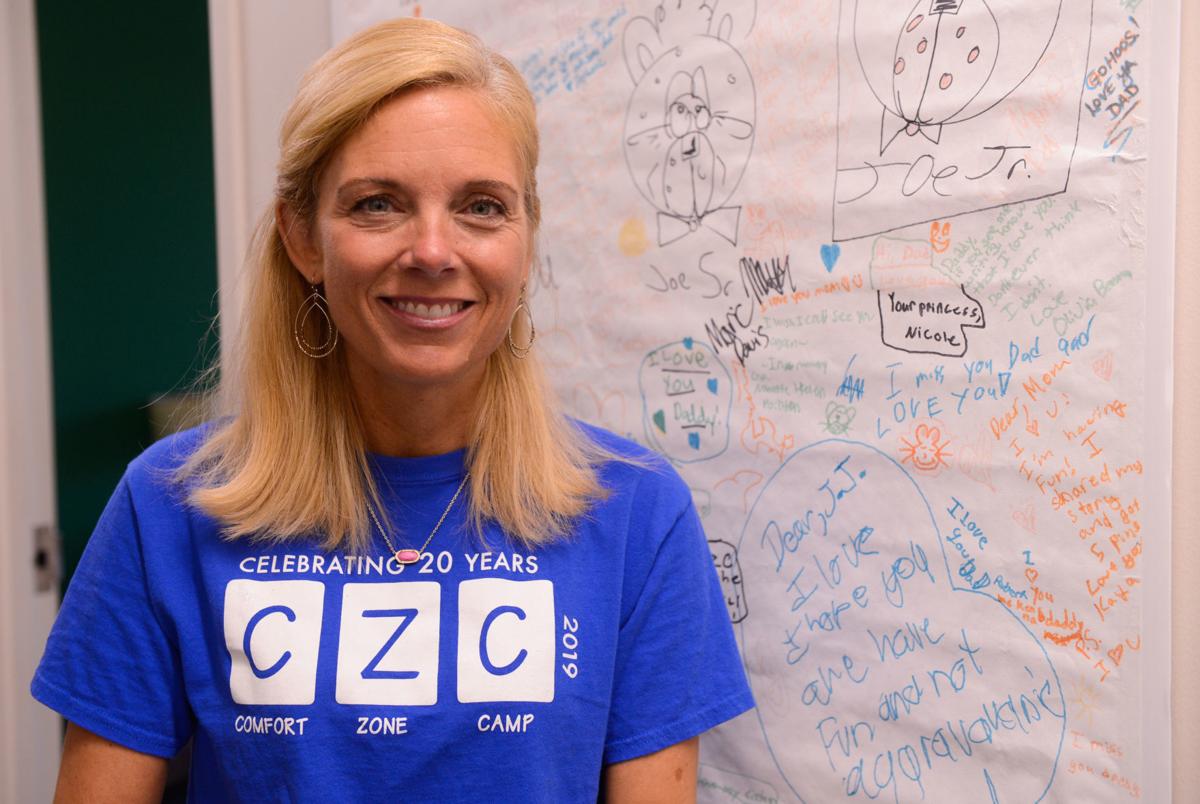 Abby Donelson showed up at Comfort Zone Camp the spring after her father died, not knowing exactly what she was getting into.

She had never attended an overnight camp, much less one with a mission of trying to help grieving children. Soon enough, though, her apprehension melted away: She was among peers dealing with loss and counselors who were sensitive to their needs.

“I really didn’t want to leave,” said Donelson, now 22, who was 8 when her father died. “It was just an amazing feeling … meeting people that are the same as you.”

Lynne Hughes knew well that journey – her mother died when she was 9, her father when she was 12. "You live every day wondering who's going to take care of you," she once said.

In 2019, Hughes marks the 20th anniversary of Comfort Zone Camp, which she founded to help families who are, in her words, “at their most vulnerable and feeling very alone.”

What was the nation's first full-time bereavement camp has now served about 20,000 children across the country – in its hometown Richmond area, of course, but also in California, Massachusetts, New Jersey and North Carolina. It also partners with organizations around the country to hold camps in other communities.

The camps, which are free, try to create a warm atmosphere where children – combining fun and serious work – can open up about how they feel about the loss in their lives.

"We don’t cure or fix them, but we try to validate what they’re feeling or thinking and give them some tools so when the tough days come up outside of camp, they can better navigate it,” Hughes said.

Beyond the camps, Hughes and Comfort Zone associates have coached school counselors on how to deal with the death of a student and helped families prepare for the death of a terminally ill parent.

“We’ve just tried to fill a need in our community that wasn’t being met,” she said.

Comfort Zone has come a long way from the early days when Hughes left her career in the hospice field to run what was originally called Camp Comfort from her dining room – she is the founder and CEO, and husband Kelly is director of operations.

They returned to Comfort Zone in 2018 after an eight-year hiatus that followed a falling-out with the organization’s board, and they found the need had not diminished – in fact, it had grown more complex as society grapples with more suicides and opioid-related deaths.

In 20 years of doing this kind of work, Hughes noted the “sort of a sad reality” that the need never goes away. The approach to dealing with grieving children has improved somewhat, but we remain “a death-avoidant society,” which made her early attempts to gather support for a bereavement camp for kids difficult because the mere subject made people uncomfortable.

Hughes often speaks about the culture of family among campers, volunteers and Comfort Zone staff. The stable of volunteers includes many teachers, counselors and mental health practitioners, but also salespeople, information technology professionals and students – and former campers who feel compelled to come back. At a recent camp, Hughes said one-third of the volunteers were former campers.

Donelson is now a senior majoring in nursing at James Madison University. As a Comfort Zone volunteer, she helps children through the same emotional wilderness she traveled years ago.

“I would say Comfort Zone kind of saved my family,” said Donelson, whose two brothers and mother also have served as camp volunteers. “My family pretty much always was willing to talk about [their grief] even before Comfort Zone, but we all found a home at Comfort Zone. We all were dealing with grief in different ways.

“I always say Comfort Zone is the best thing that can come out of the worst possible occurrence in somebody’s life.”

IN HER WORDS: LYNNE HUGHES

I have a pastel portrait of my mom that was done when she was 27. Mom died when I was 9, and I don’t have many of her things.

I’ve taken this portrait everywhere I’ve lived since I got out of college. It always hangs in my bedroom and makes me feel like she’s watching over me. I now have a 17-year-old daughter who thinks it looks like her, which makes it even more special!

One early mentor was my junior high school principal, Mr. Treais. One day in the cafeteria, he asked me what I wanted to do with my life. I told him I wanted to be famous and leave my mark on the world in a big way.

That was an "aha" moment for me. It took the pressure off me to do something grandiose, and it focused me instead on touching those who are in my life every day. It was a powerful life lesson that I never forgot.

Jackie Kennedy. I think she was incredibly strong, handled grief and adversity with grace, and was the epitome of resilience.

I am very competitive. All my siblings are brothers. I was the only girl in my neighborhood playing sports with them, and competing head-on was a daily occurrence.

My husband and I also have “competition days” where we compete against each other in backgammon, pingpong, tennis, bowling and putt-putt.

Talk show host! I love talking to people and connecting with them on a soulful level. I love getting a glimpse into how they see the world and what makes them tick.

In 2010, I had a very challenging and messy professional transition. I learned what it was like to experience grief from a life event, not a death.

I knew I had to make a choice: to either let this situation define me, or to figure out how to be happy anyway. I wanted to model healing and resilience for my kids, so I decided to do the “work” of healing. My healing was intentional – and so was my happiness.

I redefined myself and grew professionally. I met new people and made new friends. I had new professional experiences that focused on helping others who were grieving a life event. This included developing workshops to help health care professionals manage burnout, creating a camp that helped kids navigate social media and self-esteem, and leading support groups for those navigating job loss.

I also got involved in my kids' schools and my local community. New and wonderful opportunities presented themselves for my family – softball for my daughter, coaching for my husband, broadcasting for my son. We all learned to grow where we were planted.

Eight years later, in 2018, I had the opportunity to return to the organization that I parted from. It remains the perfect fit for me. I came back with a different lens – wiser, stronger and with a broader perspective on grief, resilience, leadership and culture.

I’d like to write another book. I wrote one in 2005 for Scholastic titled "You Are Not Alone," which focuses on teens grieving the loss of a parent. Now I'd like to do either an autobiography or something on "life grief" and resilience.

Also on the list: Spend an entire summer at the beach.

What is your favorite movie?

This sounds cliche, but I'd pick "It’s a Wonderful Life." The movie always makes me reflect on how interconnected we are – and how we don’t always recognize who has impacted us and how we’ve impacted others.

Clarence, the angel trainee, sums it up when he says: “Each man’s life touches so many other lives. When he isn’t around, he leaves an awful hole, doesn’t he?”

Our day would start out west with breakfast at Satterwhite’s in Manakin-Sabot. Then we'd head downtown for a Segway tour around Brown's Island and the Capitol.

We'd pop into the Jefferson Hotel to see the staircase – it’s a must see – and visit Scott’s Addition for stops at Buskey Cider and Circuit Arcade Bar (if it's a Sunday afternoon). Then we'd drive over to Portico on River Road for a late lunch outdoors.

The day would end in Ashland – with dinner outside by the train tracks at Iron Horse, followed by a nightcap at Sportspage Bar & Grille. That’s where my family and friends hang out after Patrick Henry High School events, and my daughter works there!

My Aunt Patty. She has incredible strength and faith. She also has an incredible gift of getting people to do the right thing – and they think it’s their own idea.

Be resilient. Life can be unfair, and things happen that you don’t have control over. But happiness can be intentional, and that's how you can recover. There is always something good from something bad.