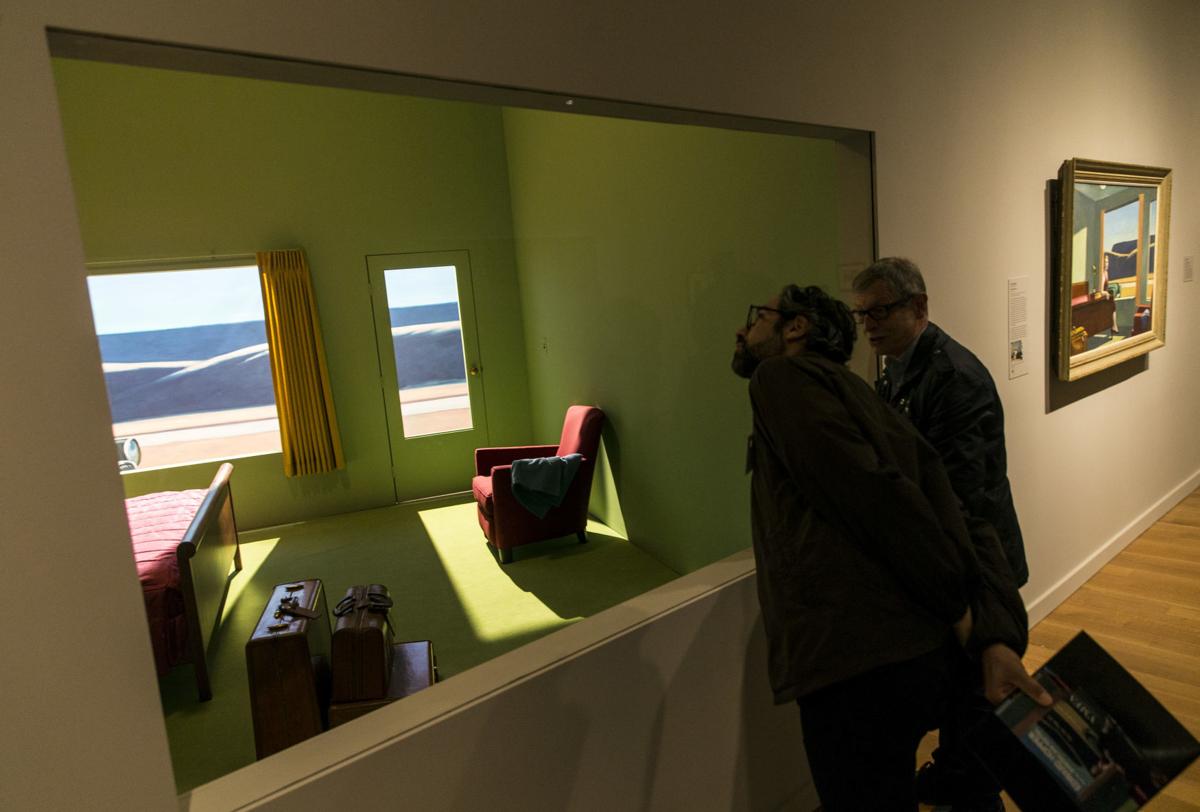 Michael Lease, left, ICA director of Facilities, Installation and Exhibition Design, and Jeffrey Allison, VMFA Paul Mellon Collection educator and Manager of Statewide Programs and Exhibitions, check out the replica of Edward Hopper's painting during the media and community preview at the Virginia Museum of Fine Arts in Richmond on Tuesday, Oct. 22, 2019. 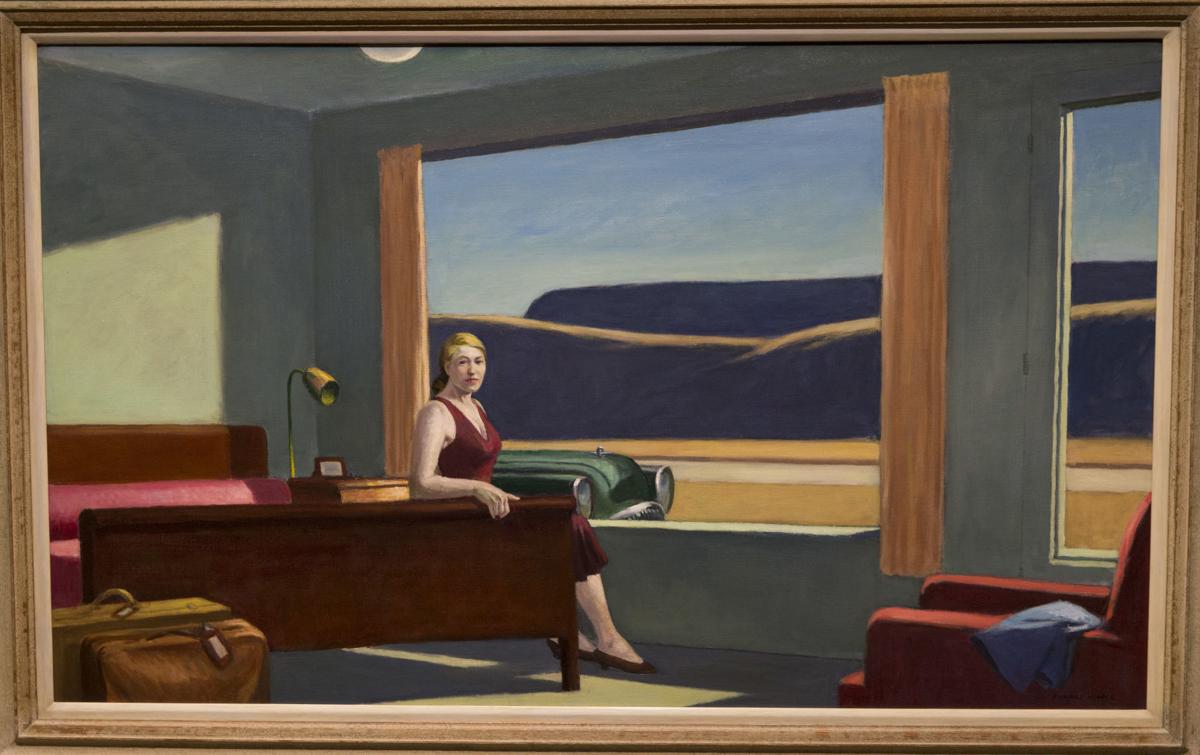 Edward Hopper’s 1957 oil painting “Western Motel” is the one on which the hotel room at the VMFA is based. 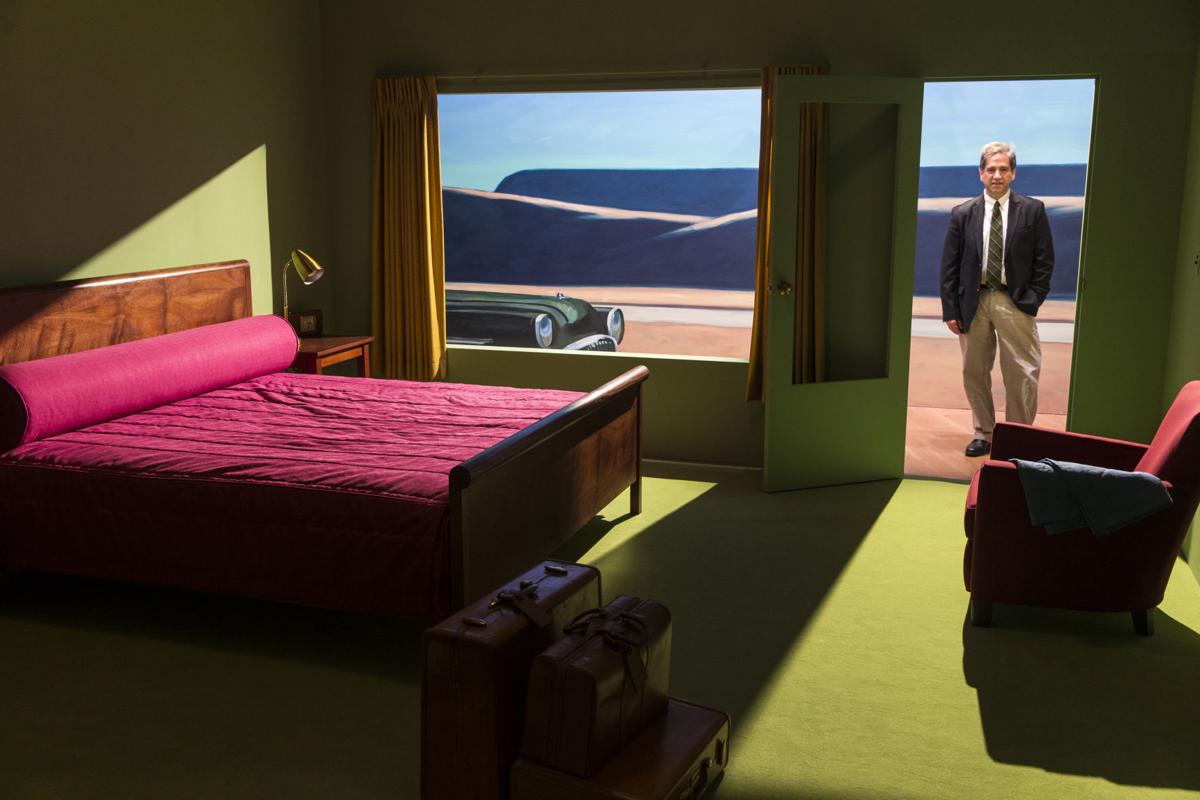 Leo Mazow, the VMFA’s Louise B. and J. Harwood Cochrane curator of American art, is shown outside the room inspired by Edward Hopper’s 1957 oil painting “Western Motel.” Forty-six nights were available for rent, all of which have sold out. 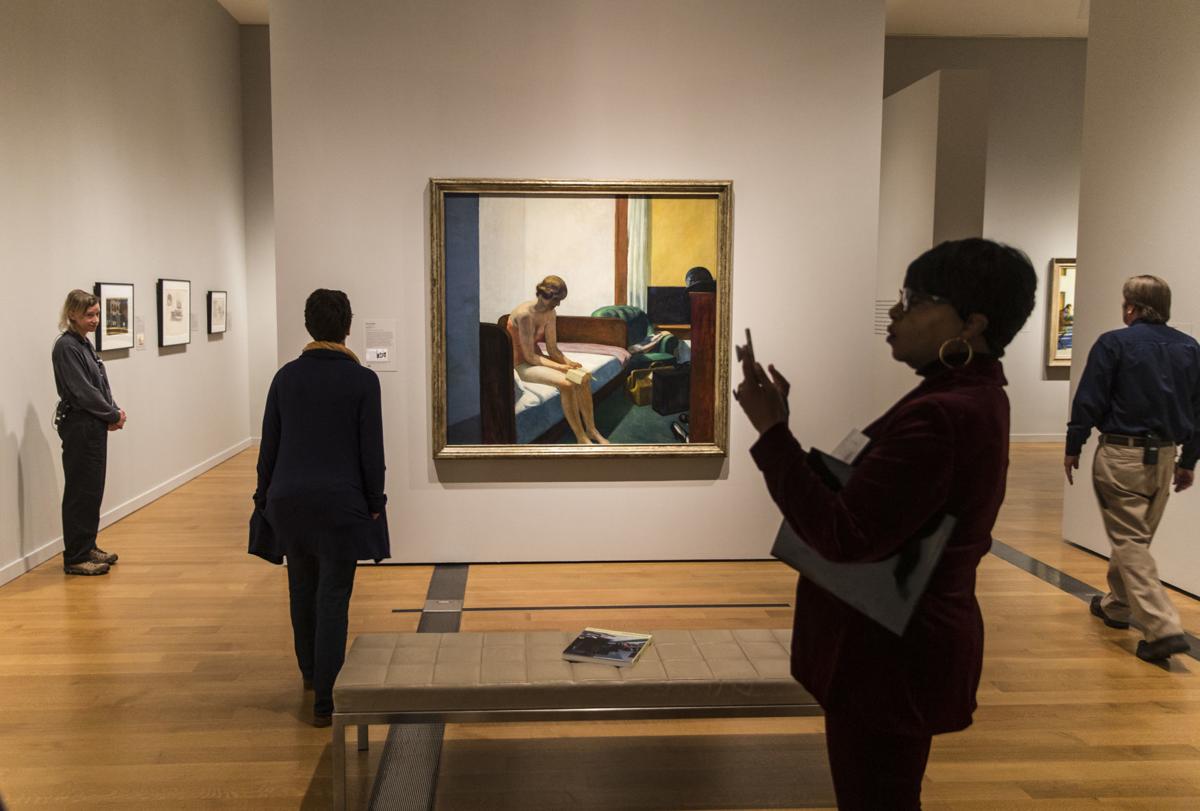 Visitors viewed Edward Hopper’s 1931 oil painting “Hotel Room” and other artworks during a media preview at the Virginia Museum of Fine Arts in Richmond on Tuesday. “Edward Hopper and the American Hotel” will open at the museum on Saturday. 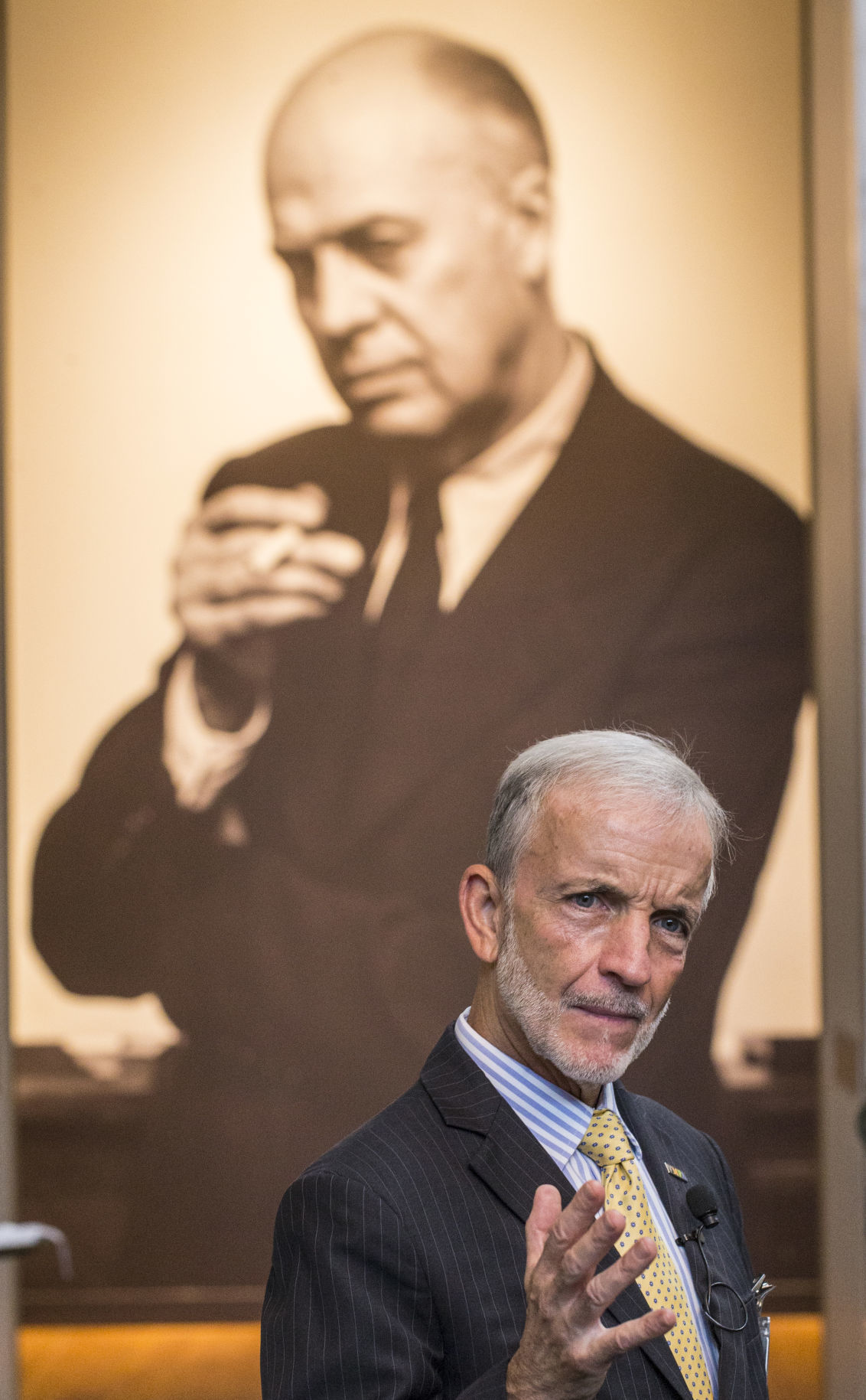 Alex Nyerges, a director of the Virginia Museum of Fine Arts, speaks in front of the photograph of Edward Hopper during the media and community preview at the museum in Richmond on Tuesday, Oct. 22, 2019. 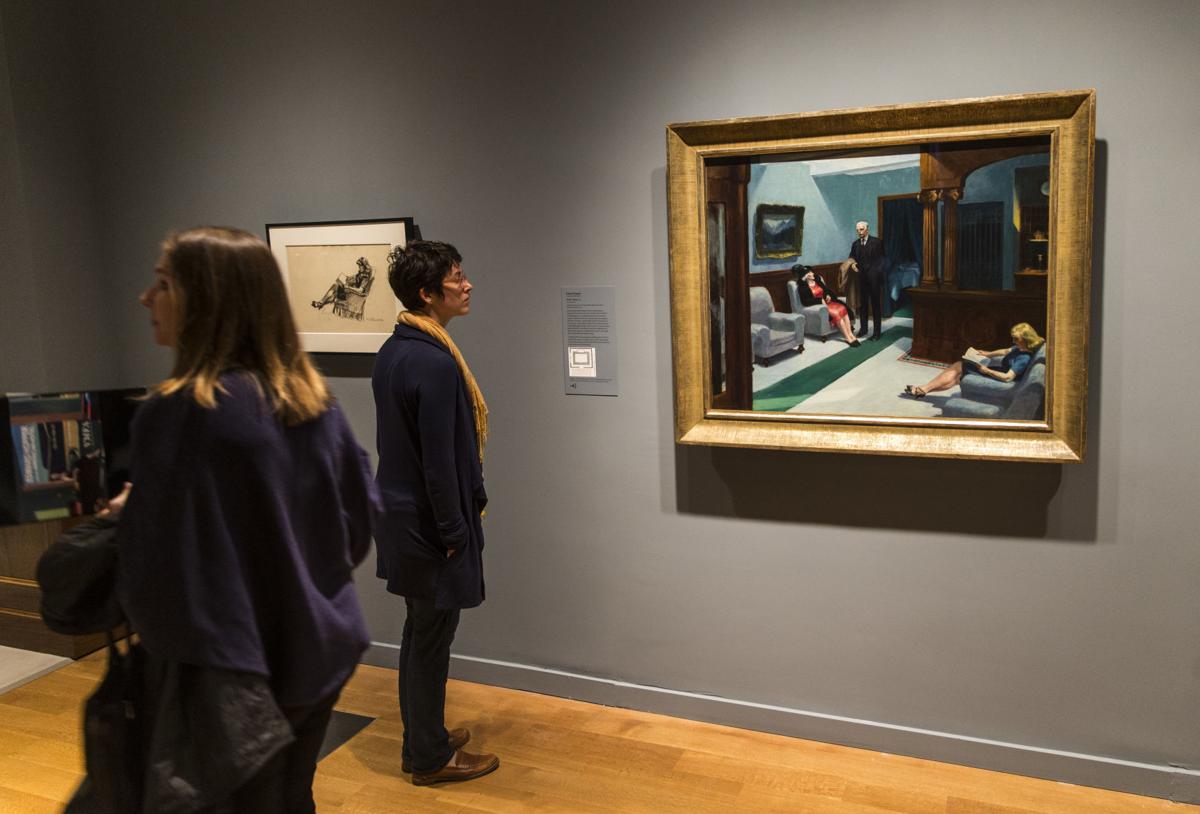 A visitor checks out a painting of Edward Hopper during the media and community preview at the Virginia Museum of Fine Arts in Richmond on Tuesday, Oct. 22, 2019. Edward Hopper and the American Hotel exhibit will premiere at the museum on Oct. 26, 2019. 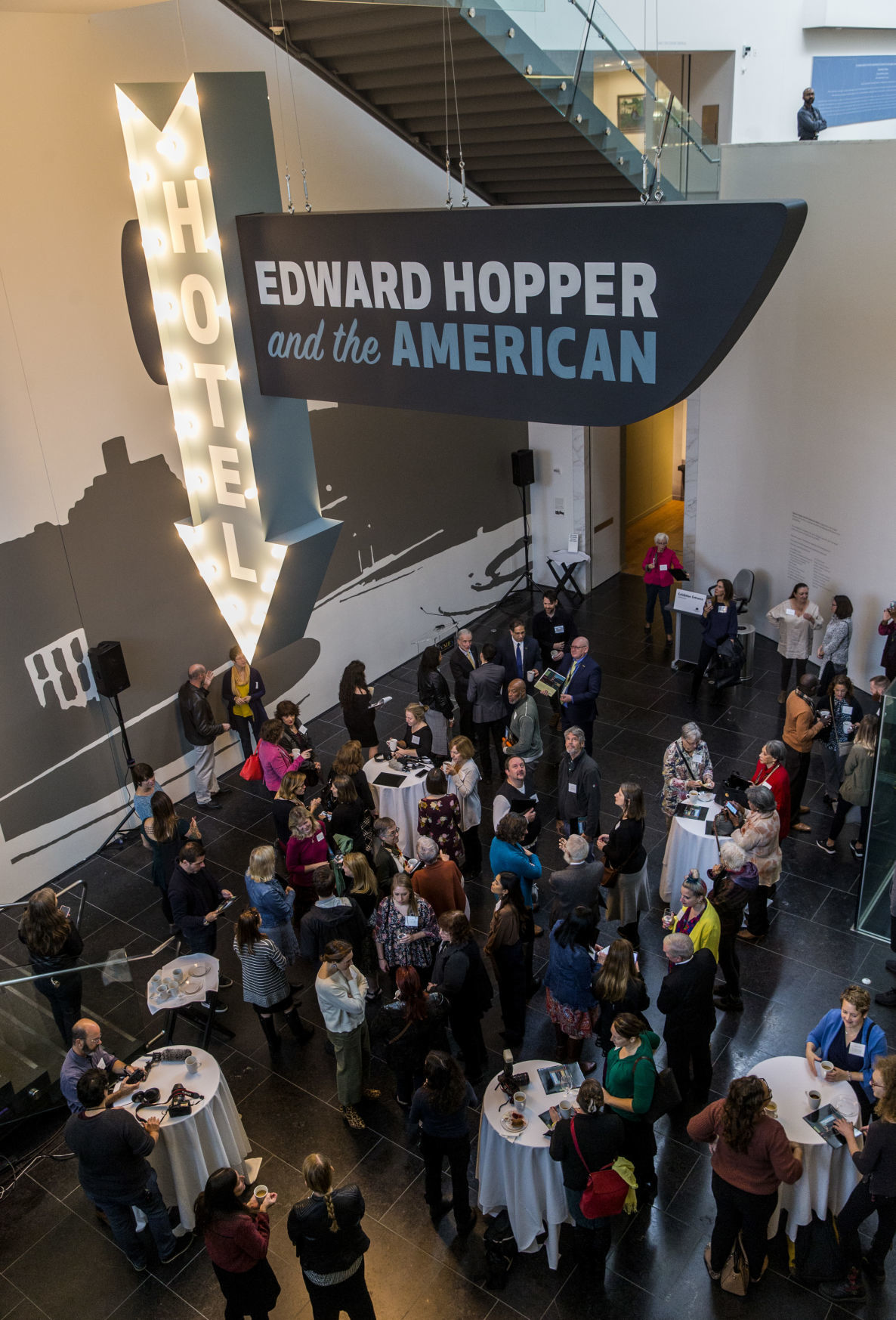 Edward Hopper and the American Hotel exhibit will premiere at the Virginia Museum of Fine Arts on Oct. 26, 2019. This photo was taken during the media and community preview. 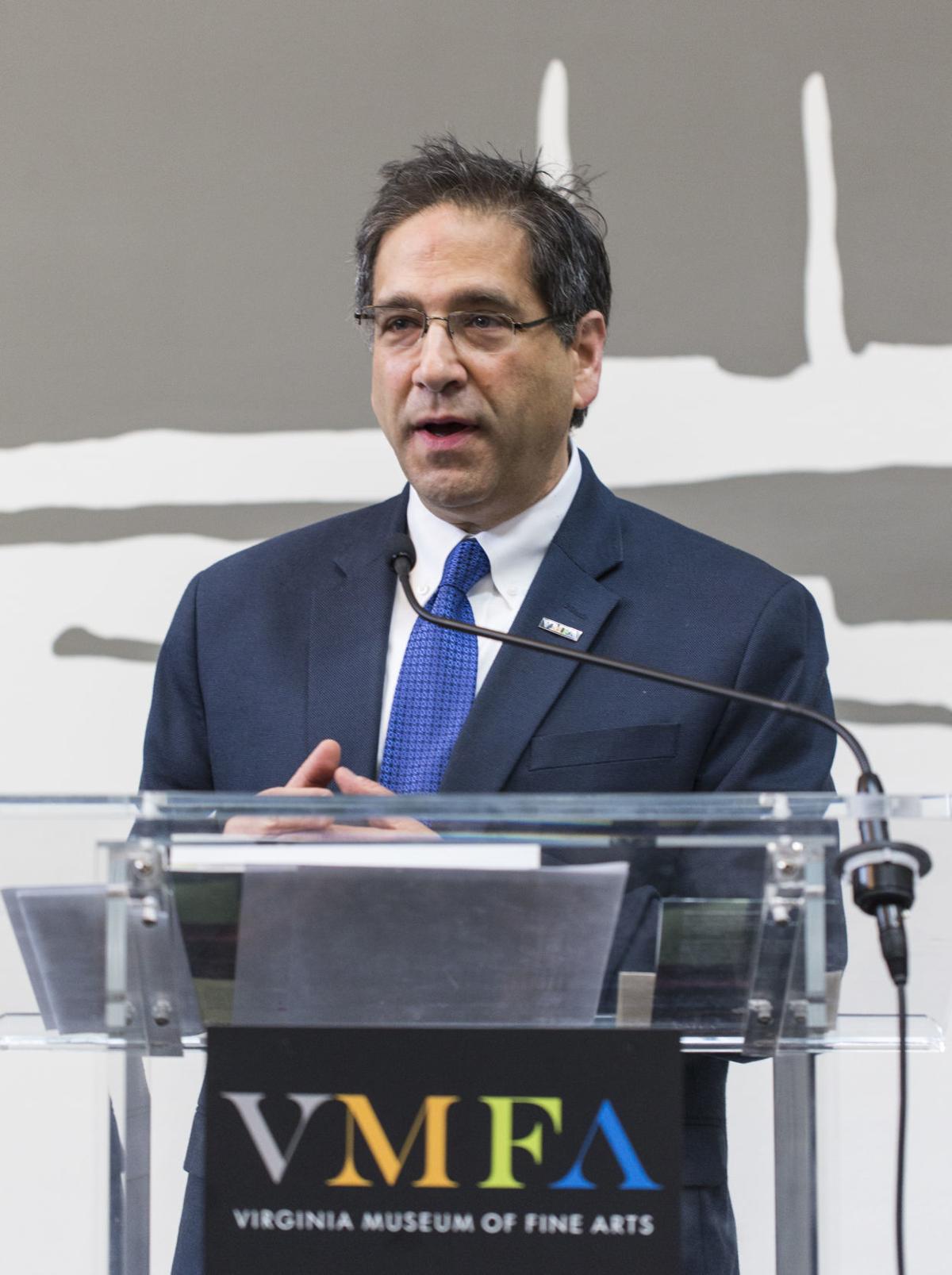 VMFA Louise B. and J. Harwood Cochrane Curator of American Art Dr. Leo G. Mazow speaks during the media and community preview at the Virginia Museum of Fine Arts in Richmond on Tuesday, Oct. 22, 2019.

Michael Lease, left, ICA director of Facilities, Installation and Exhibition Design, and Jeffrey Allison, VMFA Paul Mellon Collection educator and Manager of Statewide Programs and Exhibitions, check out the replica of Edward Hopper's painting during the media and community preview at the Virginia Museum of Fine Arts in Richmond on Tuesday, Oct. 22, 2019.

Alex Nyerges, a director of the Virginia Museum of Fine Arts, speaks in front of the photograph of Edward Hopper during the media and community preview at the museum in Richmond on Tuesday, Oct. 22, 2019.

Edward Hopper and the American Hotel exhibit will premiere at the Virginia Museum of Fine Arts on Oct. 26, 2019. This photo was taken during the media and community preview.

For an artist who explored such unsettling topics as alienation, despair and loneliness, Edward Hopper is surprisingly popular. He’s one of the most popular American painters of the 20th century.

“You say Edward Hopper and people light up,” said Alex Nyerges, director of the Virginia Museum of Fine Arts.

“Edward Hopper and the American Hotel” opens Saturday at the VMFA, bringing 60 of Hopper’s works to the museum.

Many of his most famous paintings will be on view, including “Western Motel,” painted in 1957, which shows a woman in a motel room with a red bed, a red chair and a view of the mountains.

For the first time, the museum will be offering overnight accommodations, letting guests stay in a room inspired by “Western Motel.”

Within a day of going on sale, most of the overnight packages sold out.

The fidelity of the room itself is astounding. It looks exactly like the painting, so much so that when the viewer enters the gallery, the hotel room appears to be a painting itself at first.

With its red bedspread, gooseneck lamps and brown suitcases, the room is “Western Motel” come to life. The VMFA hired an artist to paint the mountain landscape outside the window and the nose of the old-fashioned green Buick.

“This is the fullest realization of the Western motel where Edward and his wife, Josephine, stayed in 1952 on one of their many travels,” Mazow said. “The Buick sedan is similar to what they owned.”

Forty-six nights were available for rent, with packages ranging from $150 to $500, all of which have sold out to a mix of locals and out-of-towners. Guests are coming from Virginia, Washington, D.C., and as far afield as Italy.

The room is outfitted with board games from the 1950s: Life, Yahtzee, Candy Land. Cabinets are stocked with ’50s-era snacks such as MoonPies, Tootsie Rolls and licorice. There are a few modern amenities, like chargers for cellphones tucked behind the bed and a mini-fridge. There is a bathroom down the hall, but sorry, no showers.

Mazow, formerly a professor of art at the University of Arkansas, came up with the idea for the hotel room when he was conceiving of the exhibit.

“Hopper’s work is about the dynamics of looking, except it’s usually us, as viewers of the work,” Mazow said. “It’s hard to think of an artist who doesn’t take into consideration viewers of the work. But I can’t think of anyone who anticipates the trajectory of our gaze the way Hopper does.”

With its focus on hotels, motels and guest houses, the exhibit deals with issues of travel, mobility and transience. Even the museum guide for the exhibit looks like a TripTik, the old-fashioned AAA travel guides that the Hoppers used on many of their travels.

It’s taking Hopper’s realism one step further and adding another layer, almost into the surreal.

“Hopper takes the most ordinary and banal events ... and reminds us that nothing can be more faithful to the human condition,” Mazow said. “He captures the journeys that we take and the places through which we pass.”

The American hotel began to flourish in the 1920s and ’30s, responding to an expanding middle class able to enjoy leisure. The Hoppers took many road trips to gain inspiration for his work.

“Hopper reminds us that there is value in the vernacular and culture in the most commonplace things,” Mazow said. “Is there alienation here? Is there voyeurism? Do you expect that with Edward Hopper? Absolutely. But Hopper also takes the less heroic and he monumentalizes it.”

That’s what people respond to, Mazow said, Hopper’s expressions of the struggles of the everyman: the isolation in the quiet, lonely moments; the despair without the scream.

In his private life, Hopper was quiet and taciturn with a limited social circle. He relied heavily on his wife, who was also a painter. But his legend “looms large” on the American psyche.

The hotel room is often the space for that alienating experience, showing just one or two people who don’t interact with each other.

Many of the paintings follow a formula with familiar markers: a brown suitcase, a seated figure, the side view of a bed with stark, white sheets.

In “Hotel Room,” painted in 1931, a woman in a pink slip sits on the side of a bed, her clothing on a chair, her cloche hat on top of the bureau.

The woman was modeled on Jo Hopper, who acted as a study for many of her husband’s paintings. Nearby, there’s a cover of a Hotel Management trade magazine illustrated by Hopper, with the same woman, fully clothed.

Postcards, photos and diary entries can be found throughout the exhibit, pushing the interpretive edge with a new look at how Hopper created his paintings.

The hotel room isn’t the only space brought to life. The second gallery re-creates “Hotel Lobby,” painted in 1943, complete with plush, gray chairs where visitors can sit and a thick, green stripe of carpet.

The VMFA purchased the Hopper painting “House at Dusk” for $4,000 in 1953, which translates to roughly $37,000 today. Now, the painting is a museum favorite, normally on view in the American Art gallery.

Hopper served as a juror for the museum’s first biennial exhibition and was invited to stay at The Jefferson Hotel.

“House at Dusk” is on view in the exhibit, accompanied by a photo of The Jefferson that shows how Hopper was inspired by architecture in his work.

Windows are a repeating pattern in the exhibit: a frame within a frame with the subject placed in front of a window and the viewer peering in as if from a window.

“As viewers, Hopper invites us to step inside a hotel room, into these private, sacrosanct spaces,” Mazow said. Some of the women are dressed in slips or completely naked, rendering them even more vulnerable and exposed. “Windows are a powerful way to navigate the private/public continuum.”

“Nighthawks,” Hopper’s best-known painting, won’t be found at the VMFA exhibit. It shows people sitting in a diner and doesn’t fit the theme of hotels. Its owner, the Art Institute of Chicago, probably wouldn’t loan it out anyway, Nyerges joked during the media preview.

The VMFA is the only East Coast venue for “Edward Hopper and the American Hotel.” Afterward, it will travel to one location only, the Indianapolis Museum of Art.

“An exhibition like this has never been done before,” Nyerges said. “It transcends the surreal and makes it the most important and unique exhibit of Hopper anywhere.”

PHOTOS: Edward Hopper and the American Hotel exhibit at VMFA

Edward Hopper and the American Hotel

Tickets: $16 for adults, $12 for seniors, $10 for college students and ages 17 and under, free for ages 6 and under and for museum members

Q: Where did you find the bed, the bedside tables, the lamps, and the suitcases?

A: The bedside tables were designed and fabricated by our VMFA staff based on Hopper's painting Western Motel.

Lamps and suitcases are from Etsy and eBay, from the 1950s.

The bed was designed and fabricated by our VMFA staff based on Hopper's painting Western Motel.

Q: What is the name of the artist who painted the landscape?

Q: What was the most challenging part of the installation?

Q: Your favorite part of the room?

That the room looks like an Alfred Hitchcock film set from the 1950s.