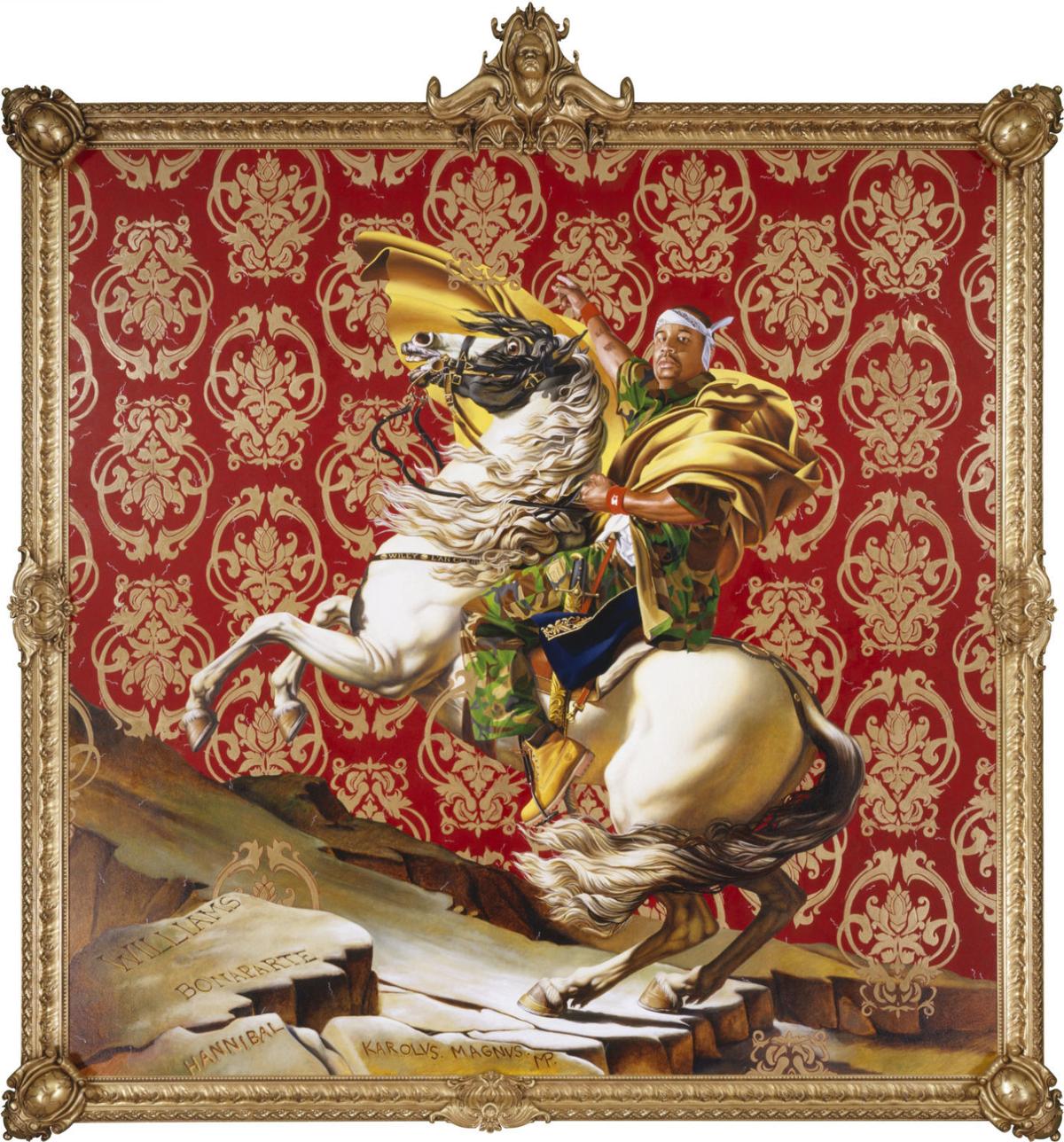 Kehinde Wiley’s “Napoleon Leading the Army over the Alps,” a rendering of “Napoleon Crossing the Alps” by Jacques-Louis David, shows how Wiley places contemporary subjects in classical settings. 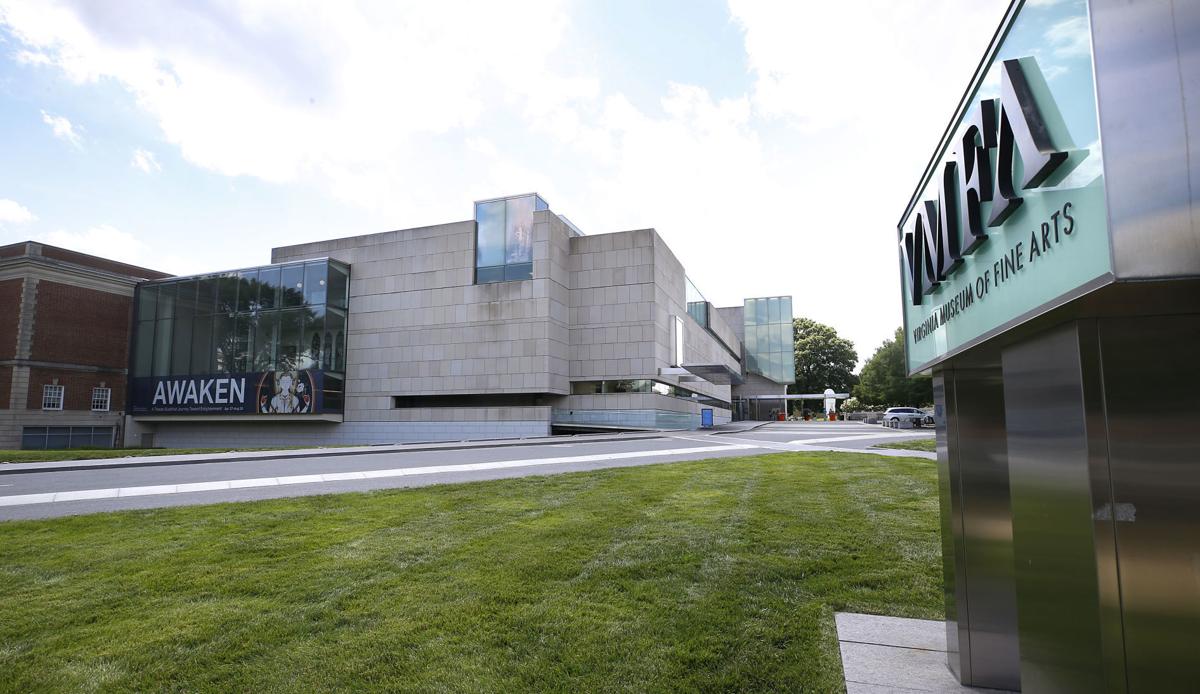 Kehinde Wiley’s “Rumors of War” will be installed at the museum’s entrance on Arthur Ashe Boulevard, just a mile from the J.E.B. Stuart statue on Monument Avenue. 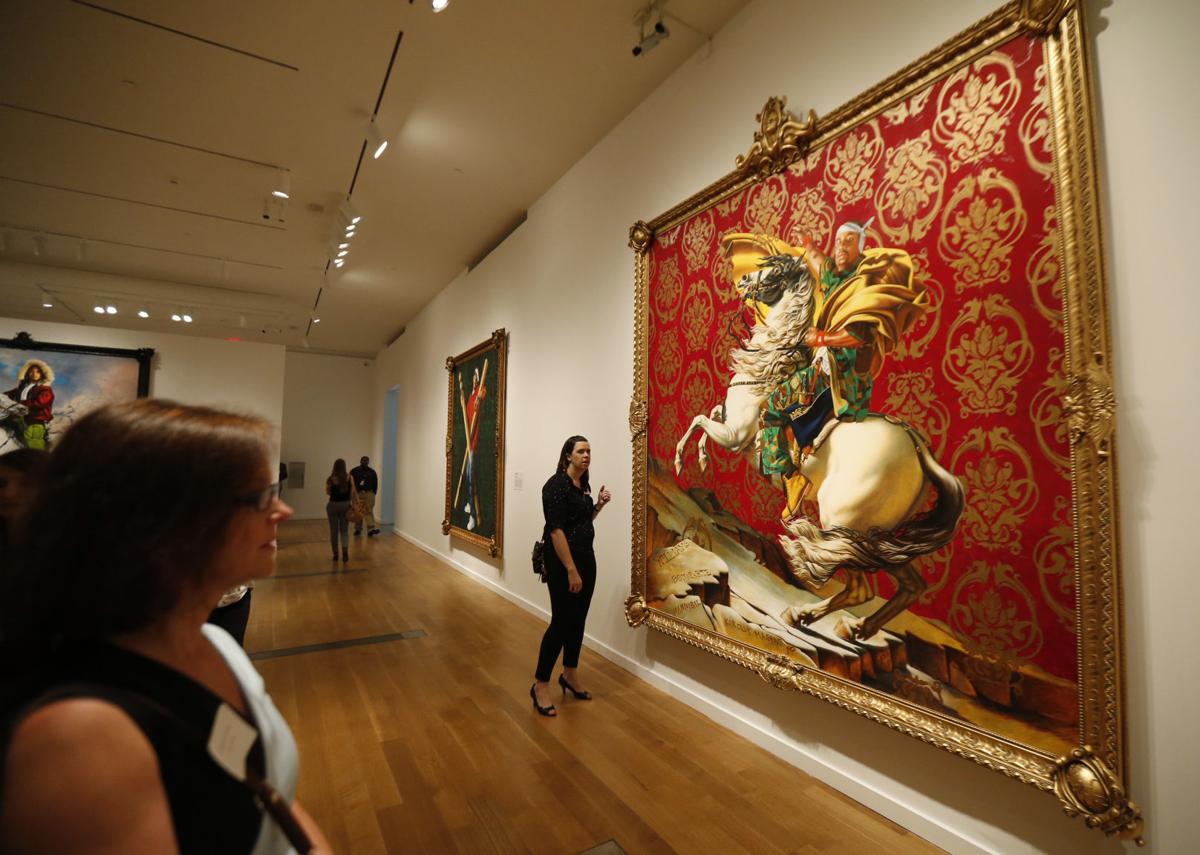 “Kehinde Wiley: A New Republic,” a mid-career retrospective of the New York-based artist. 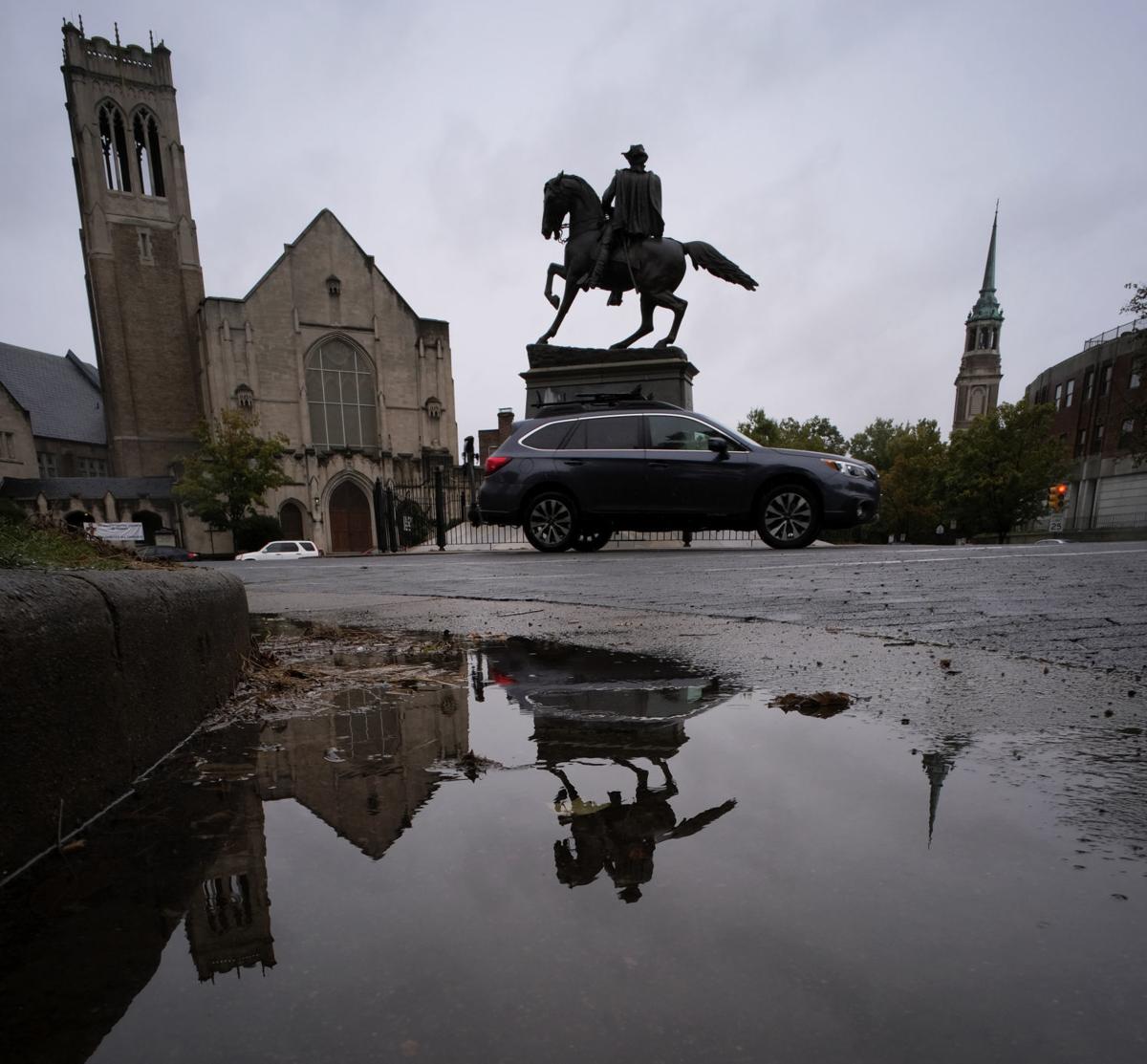 The statue of Confederate Gen. J. E. B. Stuart on Monument Ave. is reflected in a puddle as rain covered the metro Richmond, VA areaTuesday, August 29, 2017. 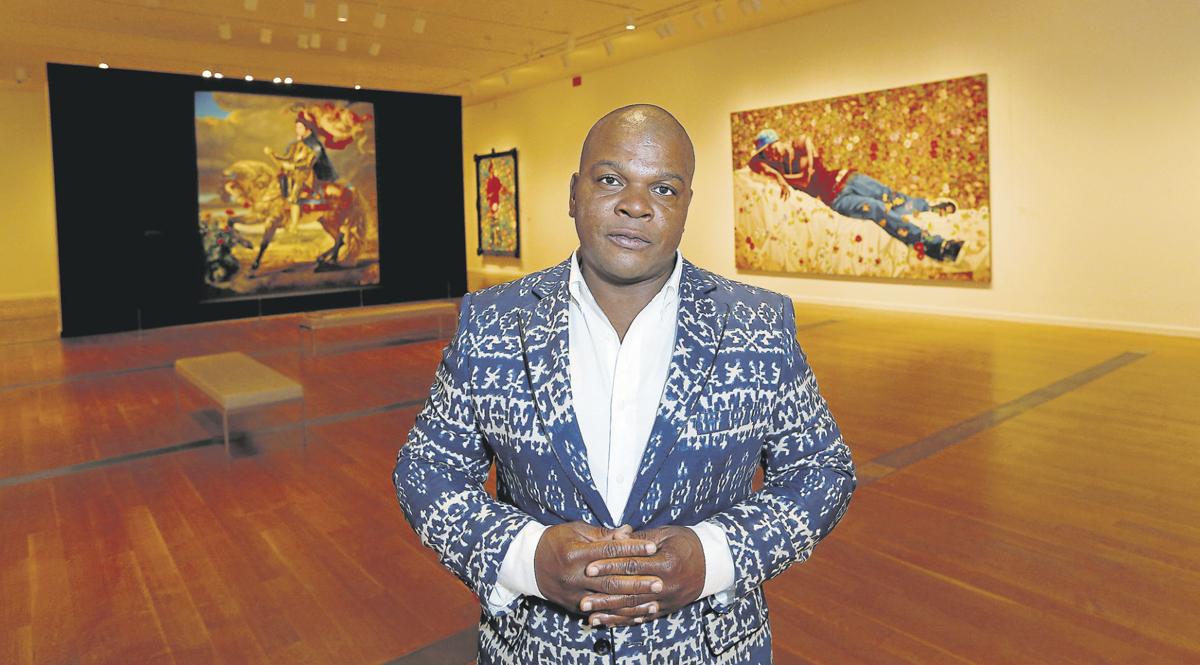 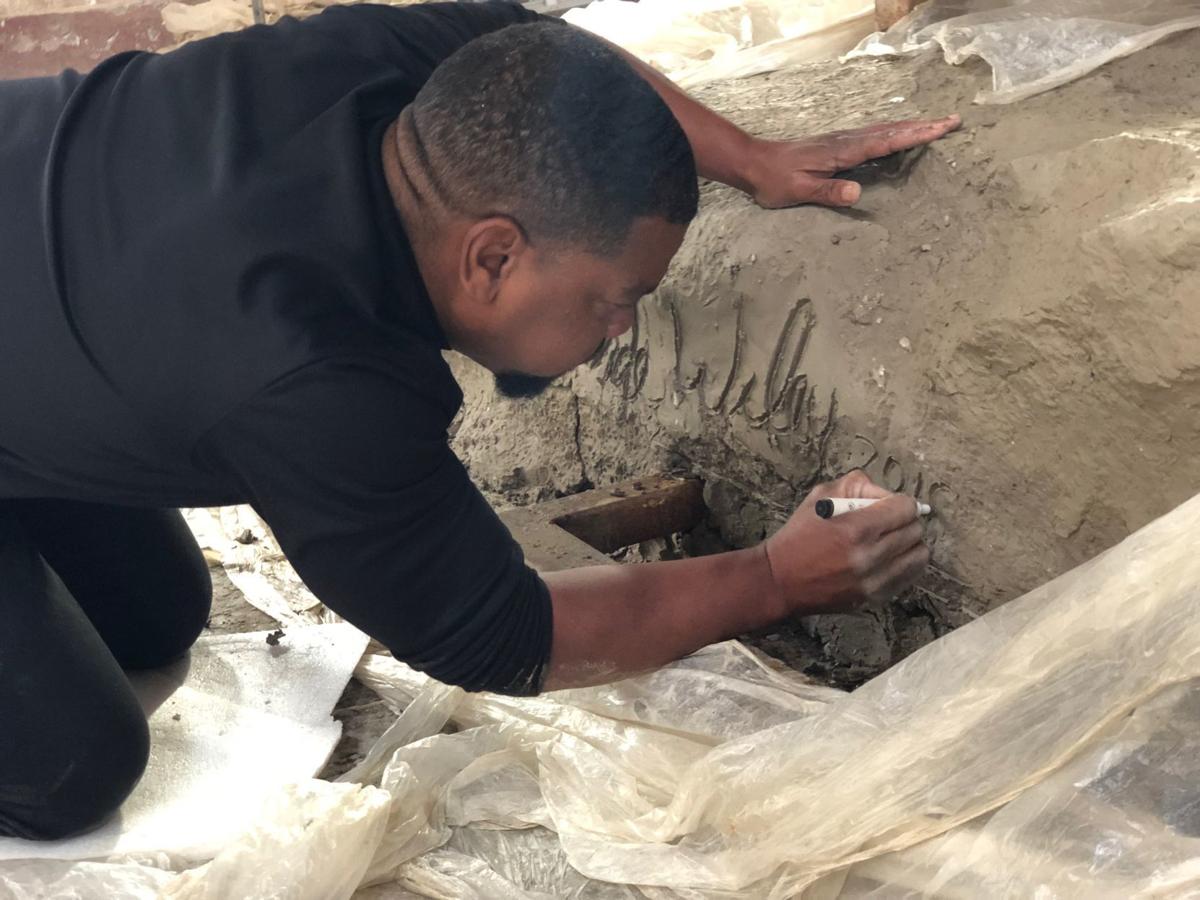 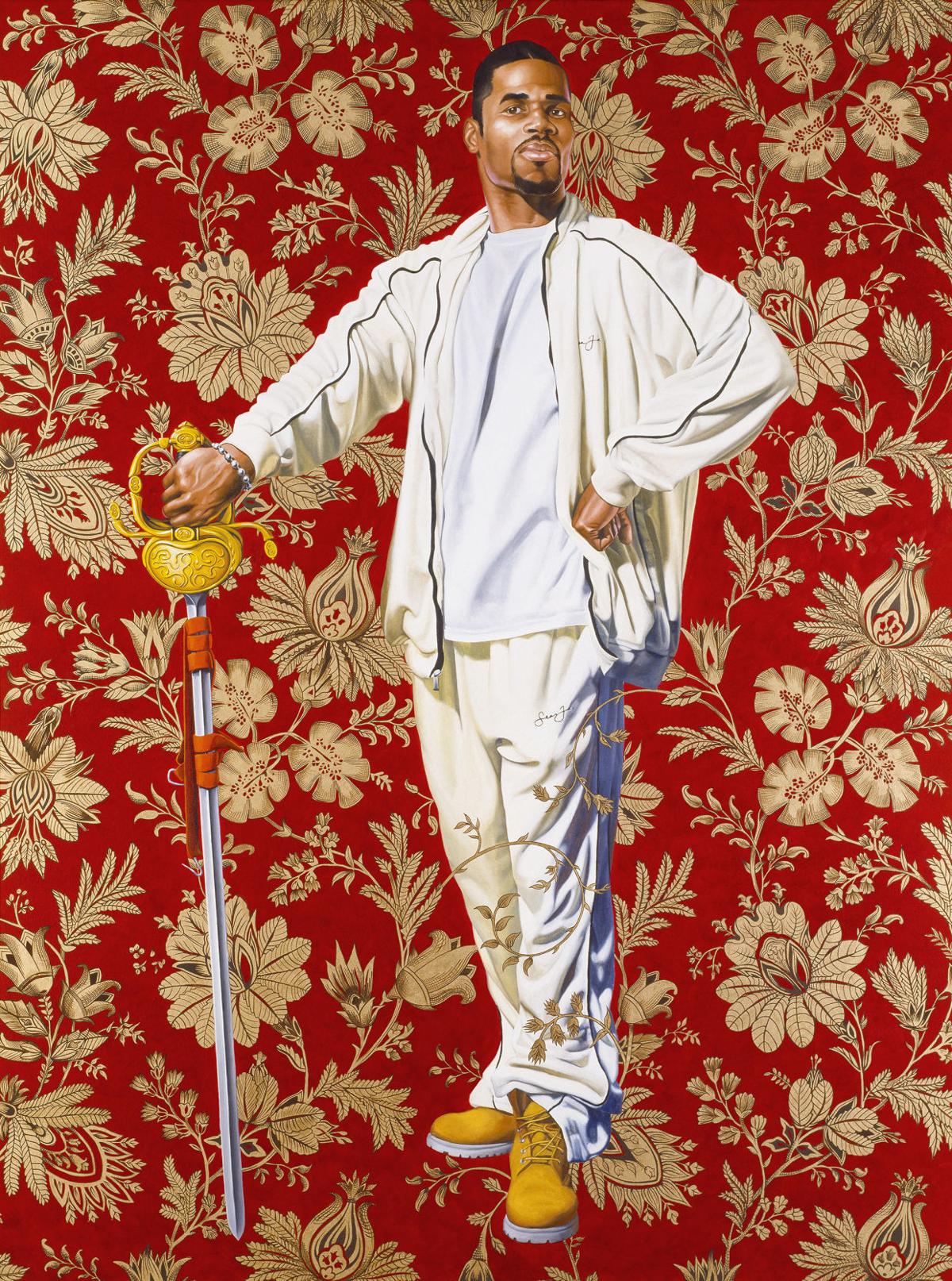 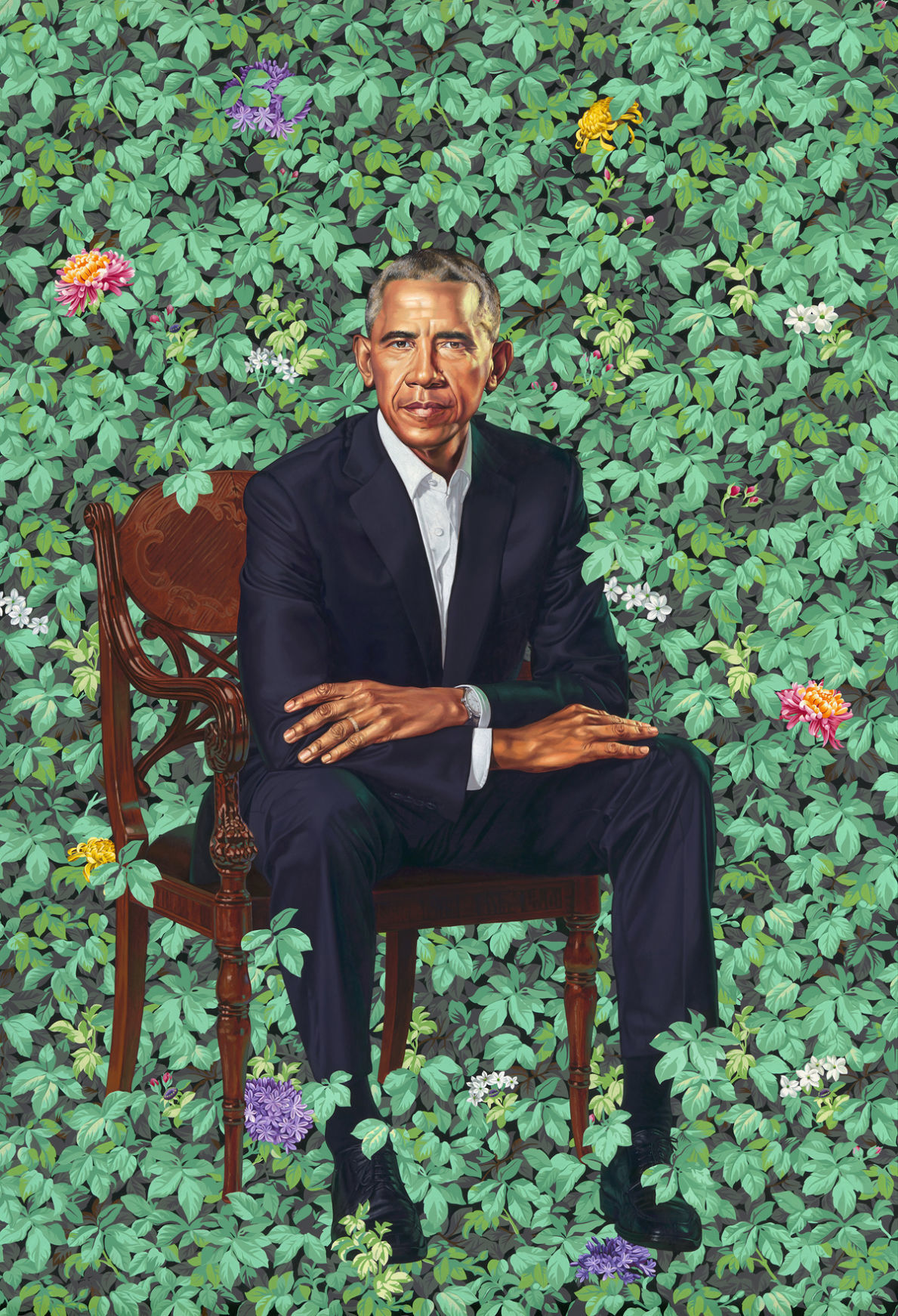 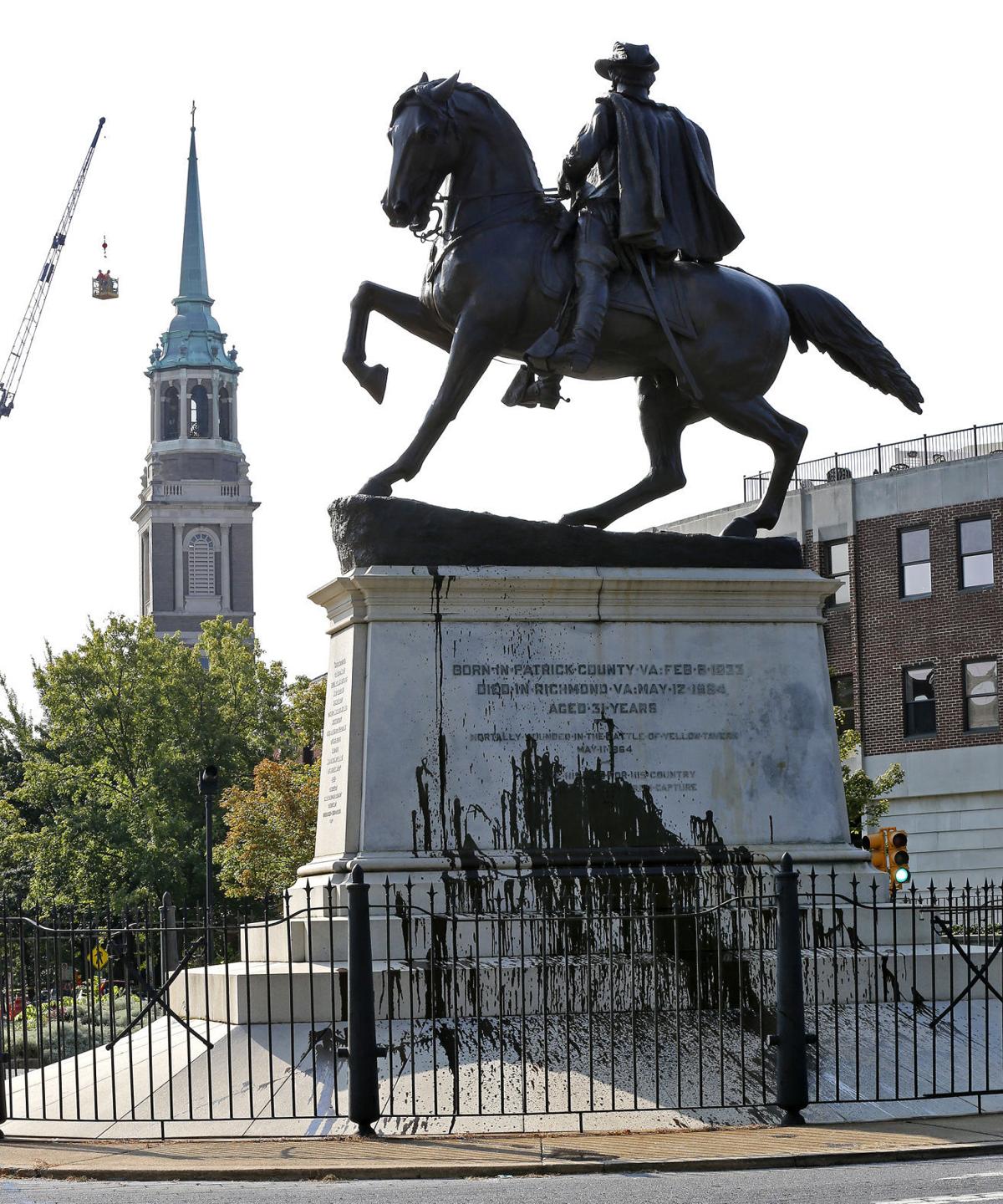 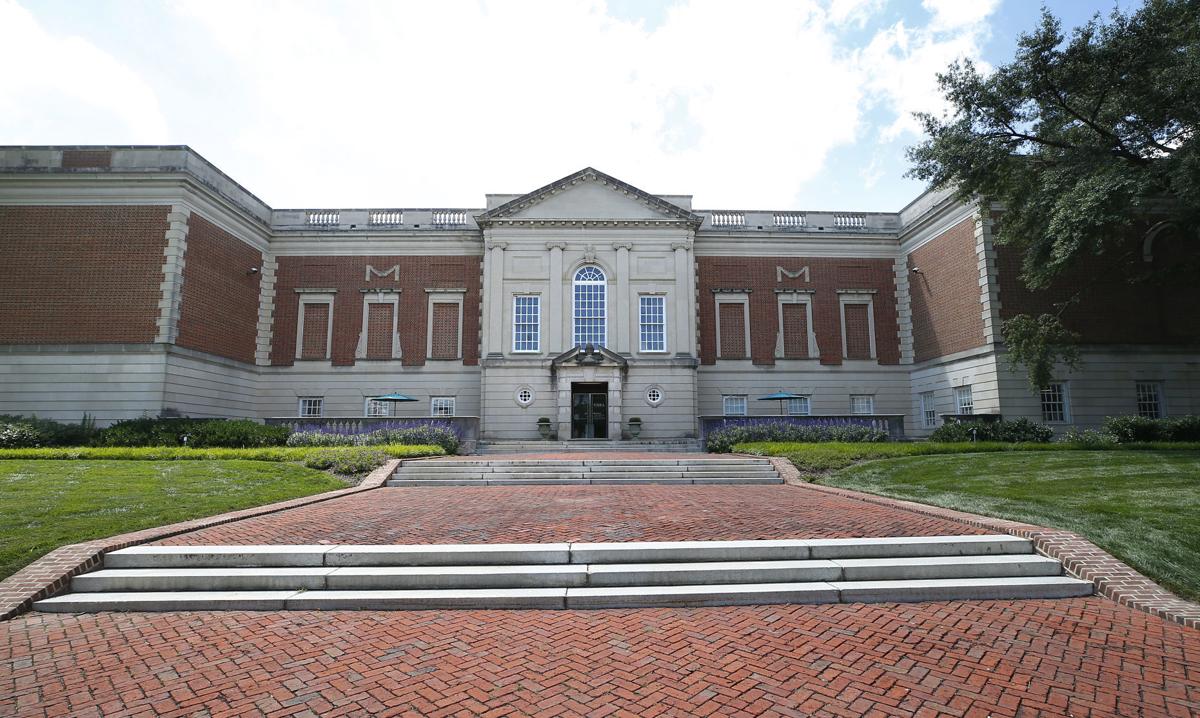 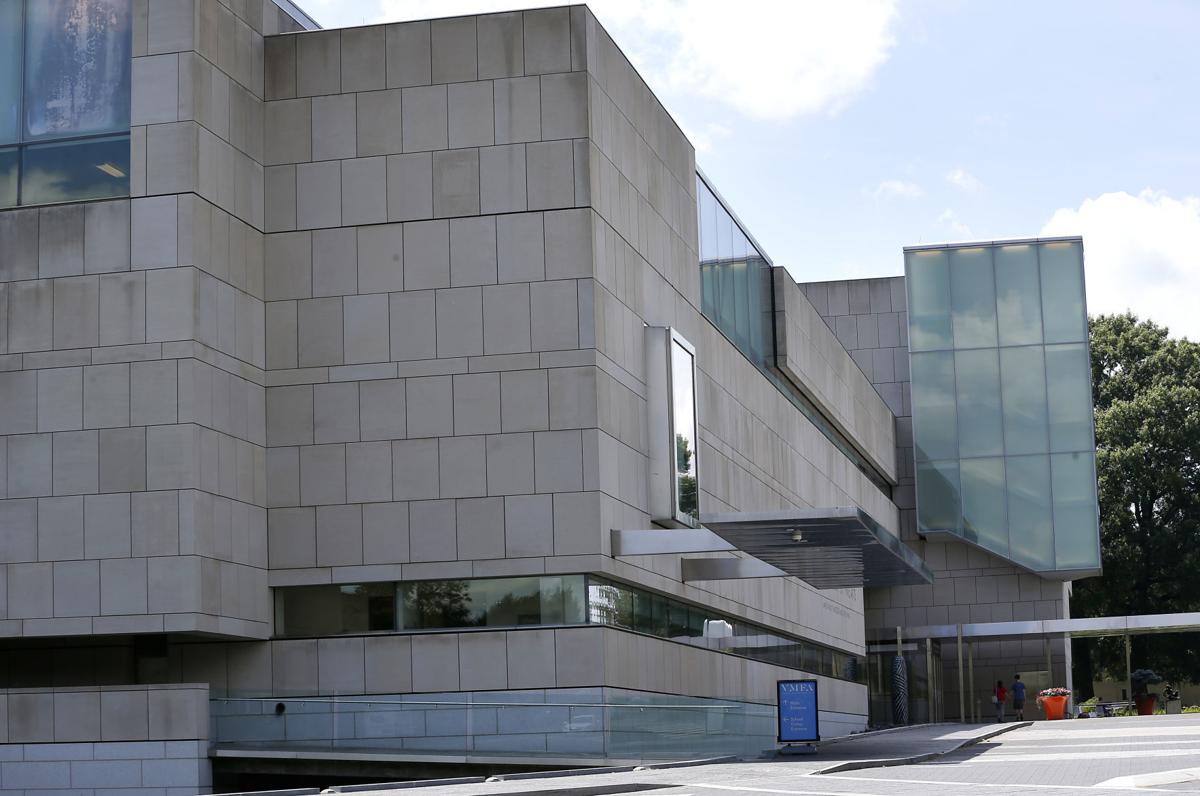 Kehinde Wiley’s “Napoleon Leading the Army over the Alps,” a rendering of “Napoleon Crossing the Alps” by Jacques-Louis David, shows how Wiley places contemporary subjects in classical settings.

Kehinde Wiley’s “Rumors of War” will be installed at the museum’s entrance on Arthur Ashe Boulevard, just a mile from the J.E.B. Stuart statue on Monument Avenue.

“Kehinde Wiley: A New Republic,” a mid-career retrospective of the New York-based artist.

The statue of Confederate Gen. J. E. B. Stuart on Monument Ave. is reflected in a puddle as rain covered the metro Richmond, VA areaTuesday, August 29, 2017.

Prominent artist Kehinde Wiley is creating a massive sculpture of a young African American on a horse — modeled after one of Monument Avenue’s Confederate statues — that will be installed in front of the Virginia Museum of Fine Arts.

The piece is specifically modeled after the monument to Confederate Gen. J.E.B. Stuart, which Wiley saw when he was visiting Richmond for his career retrospective “Kehinde Wiley: A New Republic” at the VMFA in June 2016.

“Kehinde Wiley became enamored with Richmond, the VMFA and particularly with Monument Avenue and the sculptures that populate it,” said Alex Nyerges, the director of the VMFA. “He was particularly struck by the monuments to the Confederate generals and the notion of the Lost Cause in the midst of a booming, 21st-century, hipster town. He was inspired by it and talked about it a lot. We didn’t realize at the time that it would result in this fantastic 21st-century take on monuments.”

Created on the same scale as the Stuart monument, which is roughly 30 feet tall and cast in bronze, “Rumors of War” is Wiley’s largest three-dimensional work to date.

Described by Nyerges as one of the “most recognized artists in the world,” Wiley painted the official presidential portrait of Barack Obama.

The 42-year-old artist has built his career creating larger-than-life, regal portraits of minorities in classical poses, such as young African American men in modern clothing on horseback or holding swords, positioned in ways typically associated with wealthy and powerful white men.

His paintings reference the Old Masters, with Wiley placing his contemporary subjects in classical settings.

“His work builds on the iconography of power — how individuals are memorialized and edified,” said Valerie Cassel Oliver, the museum’s curator of modern and contemporary art. “He wanted to take what he does in the two-dimensional form and take it to the next level.”

Mounted on a stone pedestal, “Rumors of War” depicts a young African American in urban streetwear, sitting astride a horse in a striking pose. It will be unveiled in New York’s Times Square on Sept. 27.

In December, the sculpture will be installed at the VMFA’s entrance on Arthur Ashe Boulevard, just a mile from the J.E.B. Stuart statue on Monument Avenue.

“It just seemed to be the right place to expand the conversation about monuments and who gets memorialized,” Oliver said. “What Kehinde Wiley does is celebrate the everyday person.”

A ribbon-cutting ceremony will be held after the installation.

“The inspiration for ‘Rumors of War’ is war — is an engagement with violence,” Wiley said in a statement. “Art and violence have for an eternity held a strong narrative grip with each other. ‘Rumors of War’ attempts to use the language of equestrian portraiture to both embrace and subsume the fetishization of state violence. ... To have the ‘Rumors of War’ sculpture presented in such a context lays bare the scope and scale of the project in its conceit to expose the beautiful and terrible potentiality of art to sculpt the language of domination.”

Although the museum declined to comment on the specific price, Nyerges said, “It is the most expensive acquisition of a sculpture we’ve ever made in our history.”

The acquisition is funded by an endowment of private donations, not state money.

Kehinde Wiley sculpture to be unveiled in Times Square on Friday; will be installed along Ashe Boulevard in December

Editor's note: Story will be updated with new photos after 2 p.m. on Friday. Check back for updates.

It would be nice to see an artist's rendering of the statue. Then again, it's not like we all get to vote on it. I only hope it doesn't look stupid out in front of the Museum. Now then, the statue dedicated to the horses and mules that served in the Civil War, which used to be out front of the building was like a Frederick Remington work, in a classical style. This sculpture might well turn out to be an outstanding work of art. We'll know when it is unveiled. If it purposely, transparently mocks the Stonewall statue, and that is the intent, with a black man in some current "urban" street clothes (whatever that might mean)...well then it still might be interesting art, or it could make the VMFA and our City look very foolish.

Can we find common ground? This is only adding more discourse

What is wrong with discourse?

Putting this photo with this article is very misleading. This photo is not what the article describes.

The “Tims” give it a nice touch. I wonder if a horses is missing from the mounted police stable

Fit-schmidt. It's brilliant. He's brilliant. The 'Mini-Met' VMFA is brilliant. We are so lucky to be living here, at this time. Next up? Dump Lee, install a fountain that WIley designs.

I think this is brilliant. So very happy for this.

This is great! Thank you VMFA!

This is awesome! Put in right in the middle of Monument Avenue! That's the logical place for it.

As artistically valid as any of that other bronze dedicated to American traitors like Stuart.

Rumors of War? That is a very aggressive name. Not particularly subtle. So we're installing a race war statue? Really VMFA?

Artists challenge the status quo. Having a perspective is kinda’ what they do. How naive to think art should be all government affirming... like Soviet art under Stalin. If you read race war into this satire I guess you should examine your own preconceptions.

It's possible the title comes from the Bible. Not totally certain, but 'rumors of war' is mentioned in Matthew.

Wow - that will be horrible looking in front of the museum. Just Wow. What an eyesore on the Boulevard. Completely out of character for a historic district. Can CAR step in? Just wow.

No more an eyesore than the statues to the traitors who took up arms against the USA. Irony is part of the point.

It does make you stop and reflect on how you see things. You may then understand that others can have a different perspective. Art can do that.

“Completely out of character for a historic district“ especially if you insist table-poundingly that your own understanding of historical facts came written on stones by the Lord His Own Self. If you think historical understanding is completely settled, satire against your understanding offends you, rather than making you think.

Steve - "historic district" is more a design aesthetic we have going in the Fan. It's very beautiful. This . . . does not fit. The Fan/Museum district is very special - one of the largest extant later Victorian/Edwardian neighborhoods in our country. The old part of the VMFA and the Historical Society look really great on the Boulevard. I just really don't think this piece of art fits in with it. It's so hit-ya-over-the-head with it's message too. I guess that's art "making you think" but it's really so obvious. Blech. It just has so many historical echos if you think about it much - pretty aggressive there.

How can you say the statue doesn't fit in, when there isn't even a picture of it in this article?

I’m grateful for the serious answer and I’m listening. How do you see the Stuart statue in all of that?

First off, we haven't seen the statue yet. So it's hard to say it won't fit. Secondly, it's done in a similar style as the Stuart statue from what I read, but instead of a civil war soldier riding on the horse, it will be a contemporary person. How will that be so ugly? I think it will be an amazing addition to the statues already around town. If you feel the only statues around should be Victorian/Edwardian, then don't go into the sculpture garden in the back of the VMFA, or heck, don't look at look at the new VMFA addition. It's all contemporary and I think an amazing expansion to an amazing art space. I look forward to the unveiling and installation. Also, what is your take on the artist's two dimensional pieces? Did you see the show at the VMFA when it was here or have you seen the piece they own?