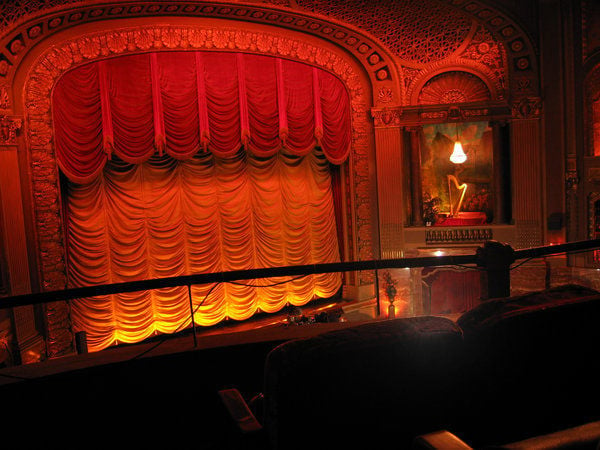 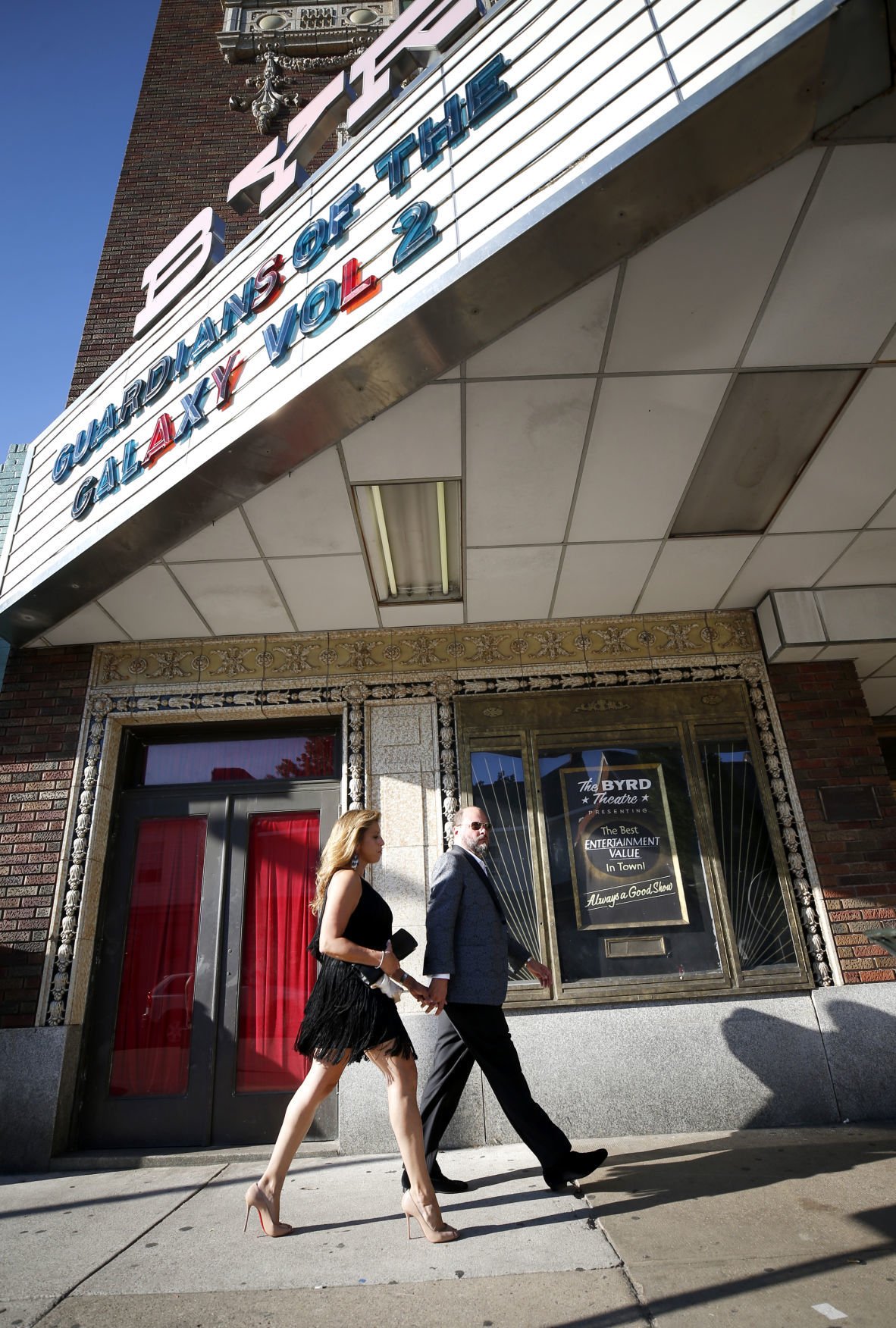 Aimee and Alex Martin walk into the Byrd Theatre for the Roaring Twenties Gala on Tuesday July 25, 2017. 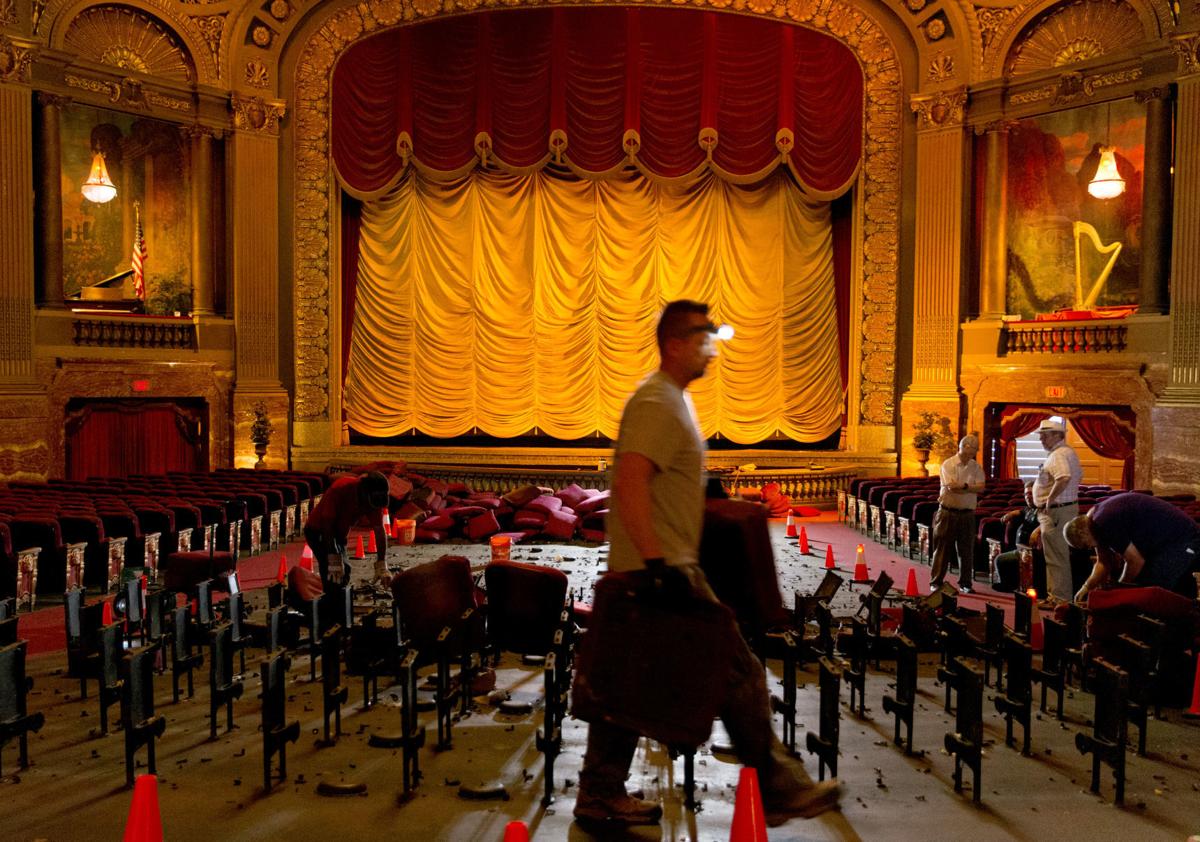 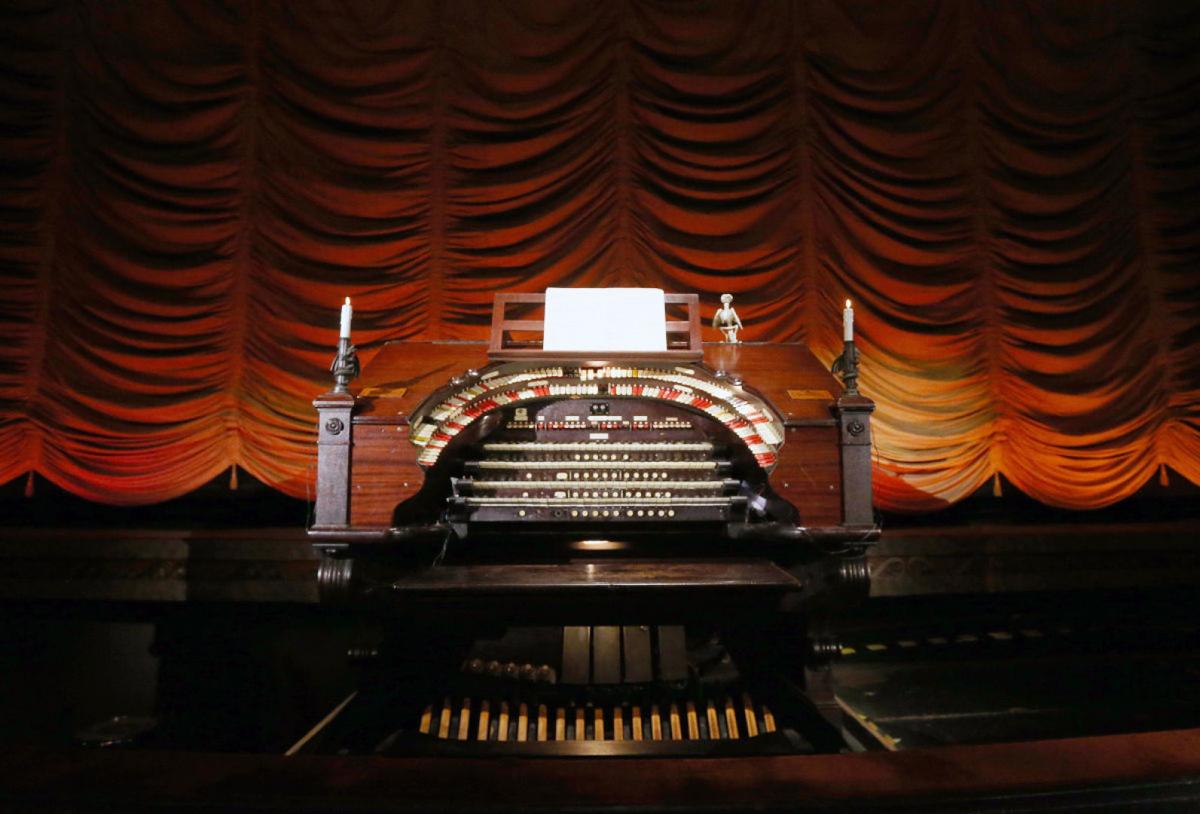 The historic Wurlitzer organ , which is being restored, at the Byrd Theatre in Richmond, VA Monday, Oct. 20, 2014. The original 1925 film, Phantom of the Opera, will be shown Friday, Oct. 24, to raise funds for the restoration. 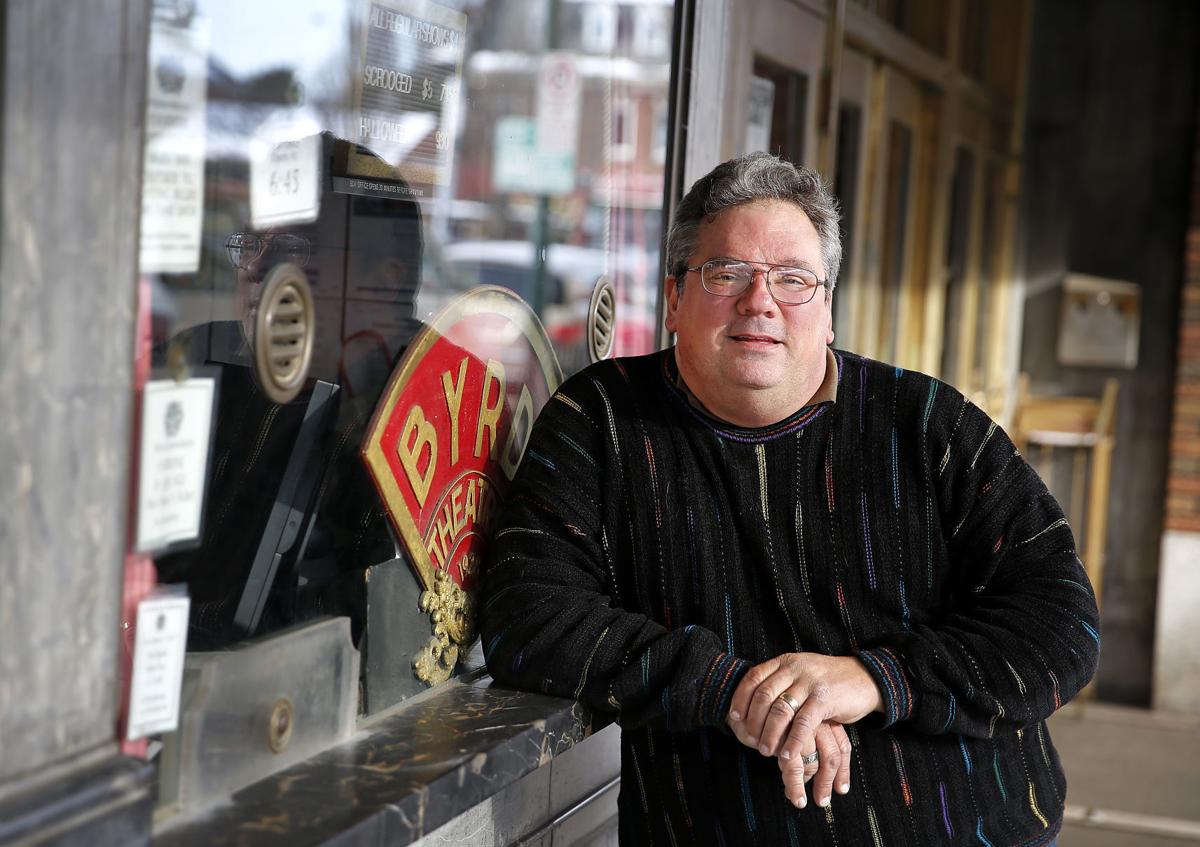 Todd Schall-Vess worked at the Byrd Theatre for 21 years. He was fired from his role as manager without severance.

Aimee and Alex Martin walk into the Byrd Theatre for the Roaring Twenties Gala on Tuesday July 25, 2017.

The historic Wurlitzer organ , which is being restored, at the Byrd Theatre in Richmond, VA Monday, Oct. 20, 2014. The original 1925 film, Phantom of the Opera, will be shown Friday, Oct. 24, to raise funds for the restoration.

Todd Schall-Vess, the institution’s longtime manager, was fired in November. Two board members stepped down over the way it was handled.

Now people are wondering: What’s going to happen to the Byrd?

Schall-Vess became known as the face of the theater over his 21 years there — he introduced movies, hosted special events and did everything it took to keep the roof from caving in.

Although the Byrd Theatre Foundation board said it cannot comment on a personnel matter, others said there was a personality issue with Schall-Vess. He can be gruff and opinionated.

Sharon Kelley, who had been on the board for four years, stepped down in the fall because she didn’t agree with the direction the board was taking, which led to the firing of Schall-Vess, she said.

“Todd will tell you what’s wrong with an idea, why it’s not in the best interest of the theater, and he won’t wait for you to leave the room to do it. That can be embarrassing for some people,” Kelley said.

Schall-Vess was not offered severance by the foundation, which now manages and operates the Byrd.

“After 21 years of 365-day-a-year dedication, this was not the way to do it,” Schall-Vess said. “One of the things that I’ve struggled with is that people ask, ‘Should we no longer support the Byrd?’ I feel that conceptually the Byrd is still something worthy of support. However, if the people who are currently in charge are capable of treating someone the way they’ve treated me, that is cause for concern.”

Dave H. Martin, a volunteer at the Byrd who has served on the board, said the decision to terminate Schall-Vess was something the board had been considering for many years.

“It’s always been an adversarial relationship with Todd,” Martin said. “He’s done very good things for the Byrd, but there were challenges. He was not always on board with the foundation’s authority. He was not enthusiastic about the changes we made, when we tried to modernize, like upgrading to credit cards for tickets, which was enthusiastically received [by the public].

“He’s a great personality and a great speaker, but I don’t think he got along with a lot of people, including the board, volunteers and donors. There are many theatergoers who had crossed with him before.”

Schall-Vess has been described by some as a prickly personality who created a hostile work environment. But others say he was 100% devoted to the Byrd, working day and night to keep the movie palace operating during challenging times.

Bob Ulrich, a board member for the past three years, decided to step down because of how the firing was handled.

“Regardless of what you think about Todd, you can fire anybody you want to,” Ulrich said. “But it’s the wrong thing to do after 21 years. He should have been offered severance.”

With Schall-Vess’ firing, many Richmonders are wondering about the Byrd’s future.

For years, the Byrd has been a second-run movie theater, offering movies at affordable prices.

The allure of the Byrd, for many, is the experience of going to a grand movie palace, with the Mighty Wurlitzer organ, the singalong and the majestic curtain going up before the feature film.

Schall-Vess and the board members who have stepped down believe the board is making a play to become more of an “art house” movie theater.

Recently, the Byrd has been running a first-run film: Adam Sandler’s “Uncut Gems.” But that’s a rarity.

“We do not plan to become a first-run movie theater,” said Lisa Rogerson, marketing director for the Byrd. “‘Uncut Gems’ was a good fit. It came from a smaller production house. We took advantage of it. It brought new people to the theater. But it’s not sustainable for us to be a first-run theater.”

As a first-run movie theater, “we would be expected to run the film in all available time slots and that doesn’t provide us the diversity of programming we know our community wants,” Rogerson said. “It is one part of our content mix, not all.”

“We have the unique ability to bring in an ‘artsy’ film without having to commit to this exclusively,” Ted Haynes, president of the board, said via an emailed statement. “That’s part of what we think makes us successful, our varied programming. Classics, sub-run, art-house, quirky and the occasional first-run.”

Starting in 2016, the programming committee began introducing more variety to the Byrd’s offerings, besides only sub-run, or second-run, movies. The Byrd now shows big screen classics, family films and marathons.

That’s the vision the Byrd aims to continue, said Rogerson, adding, “We are not changing our programming strategy.”

The programming committee is made up of board members and volunteers. Schall-Vess was part of the committee, but not the sole member.

“The programming is not going to suffer from his loss,” Martin said.

But Schall-Vess was the booker for the Byrd, meaning he selected the second-run movies he thought would be a good fit for the Byrd’s audience. The Byrd is now working with a booking agency.

“Todd was doing the job of the film buyer, the general manager and every other odd and end. He knows the theater inside and out. They’ve lost the intricacies and the know-how that he had, like raising and lowering the chandelier for cleaning,” Kelley said.

Since purchasing the Byrd in 2007, the nonprofit Byrd Theatre Foundation has aimed to restore and upgrade the theater.

The foundation has raised $1.5 million to replace the roof and heating and cooling systems, invest in digital projection and conduct more necessary behind-the-scenes upgrades.

In 2016, the theater raised ticket prices from $1.99 to between $4 and $6 for second-run new releases and repertory films such as classic films or animation classics.

In 2017, the foundation spent $140,000 to add 234 much-needed new seats to the main section of the theater. But the theater has 1,200 seats and will need to replace most of the rest of them, as well as pay for other upgrades and general upkeep of the opulent 1928 movie house.

Some wonder about the direction the foundation is taking and whether the volunteer board has the expertise to steer the Byrd into the future and keep it operational.

Starting in 2007, the Byrd operated as two separate entities: as 1928 Ltd., which ran the daily operations of the theater, and the Byrd Theatre Foundation board, which was focused on fundraising.

In October, the board voted to dissolve 1928 Ltd., which employed Schall-Vess.

“There are only a few movie palaces [like the Byrd] in their original condition. That is a really special thing. In my view, you don’t go making radical changes to something as special as that; you make incremental changes,” Ulrich said.

“The theater is modernizing. It’s a difficult industry. We have to evolve and grow. We want to be a theater that’s open, welcoming, kinder and gentler. Sometimes, you have to look at your personnel and make adjustments,” Martin said.

As for his next job, Schall-Vess said, “I truthfully have no idea. It’s about reimagining what the rest of my life will look like.”

I am horrified at the treatment Todd Schall-Vess received at the hands of the board of the Byrd Theatre. After 21 years of service, a great deal more consideration should have been afforded him. This decision is utterly inhumane considering his decades of devotion to this beloved Richmond landmark, and those board members should be ashamed of their actions. My personal experience with Todd was one of open-hearted welcome and a genuine offer of reciprocal collegiality between our organizations--we did many projects together and he worked to support them all, with energy and without reservation. He is unfailingly generous, funny, kind, and deeply knowledgeable with a breadth of experience and expertise this theatre is not likely ever to find again on a nonprofit salary. This is a horrible, horrible mistake.

Good luck, Todd. I have no doubt the Byrd will soon regret firing you, if they don’t already.

Please don't change the way the Byrd operates! It's one of Richmond's shining stars. Firing a successful 21-year employee without severance?? Shame on you. That's unthinkable.

Opposing all forms of electronic payment seems downright ludicrous in the modern marketplace. DO Generation Y and Z consumers even use cash anymore? Also, will the balcony at the Byrd ever open up again? Just asking. It's been off limits for well over a decade.

It cannot be a non-profit and charge full price for the movie. Then it only has one screen what if they pick a dud? like Han Solo. Look I know of this amazing man and I do admire him and he got screwed period Shame on this non-profit. Shame shame and more shame. Maybe somebody in Richmond Government want's to change the name...since "Byrd" reminds them of the Byrd Machine...but hey everybody.....he was a democratic political leader that screwed so many voters...with his control of local government's..... ...do a fact check...on his political history.

People like us where we tell the powerful exactly what’s wrong are either silenced...... destroyed..... or fired. Excellent reporting. The Foundation made a big mistake —— once again overpaid or people who hold the purse strings destroy an icon. How can I say this? I am of the same because I perfected back in November children and adults would be killed on unsafe parades in the United States in December and once again people like in the board of the Foundation did nothing ..... and in our example children became squashed .....and died. www.paradesafety.prg. Google Parade Accident. Children were killed in December and just like this Amazing manager he was fired and in our case so many want the same fir me