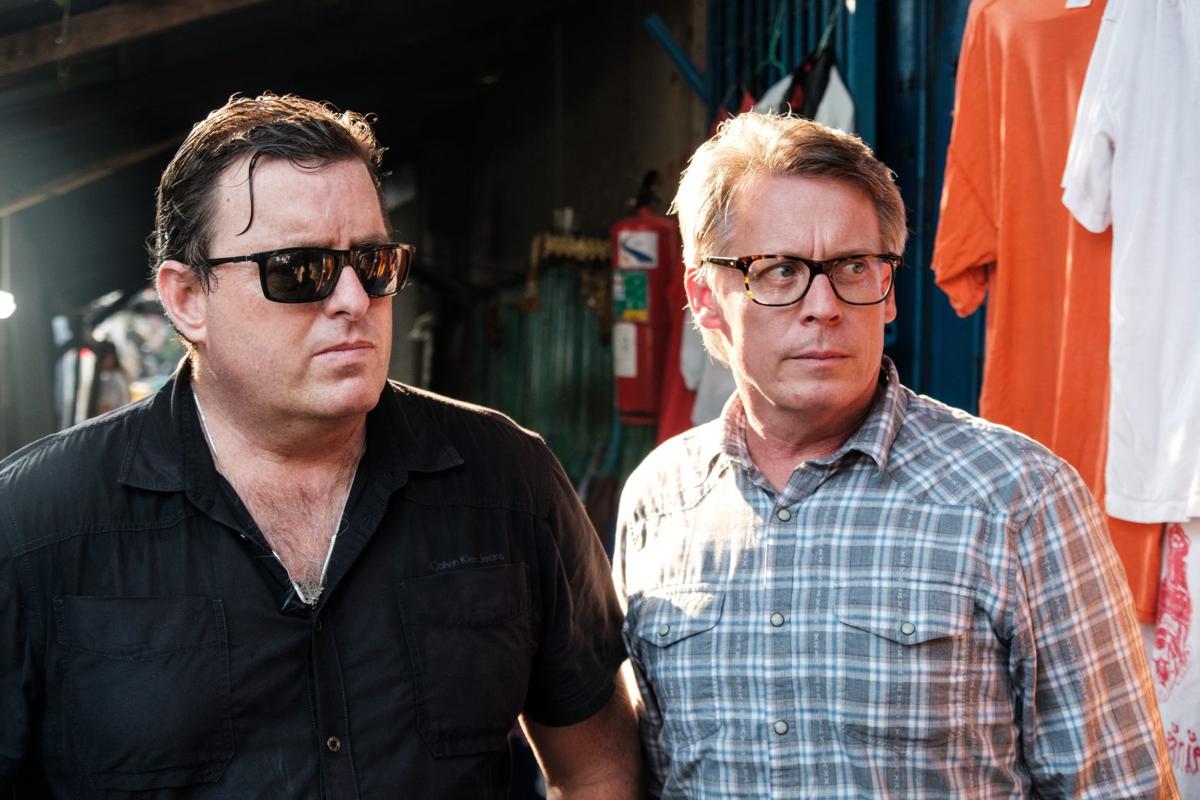 Craig Martin, (left) of Richmond, and Earl Bridges, hosts of the new PBS series “The Good Road,” have reported stories from all around the world, including a slum in Bangkok in this photo. 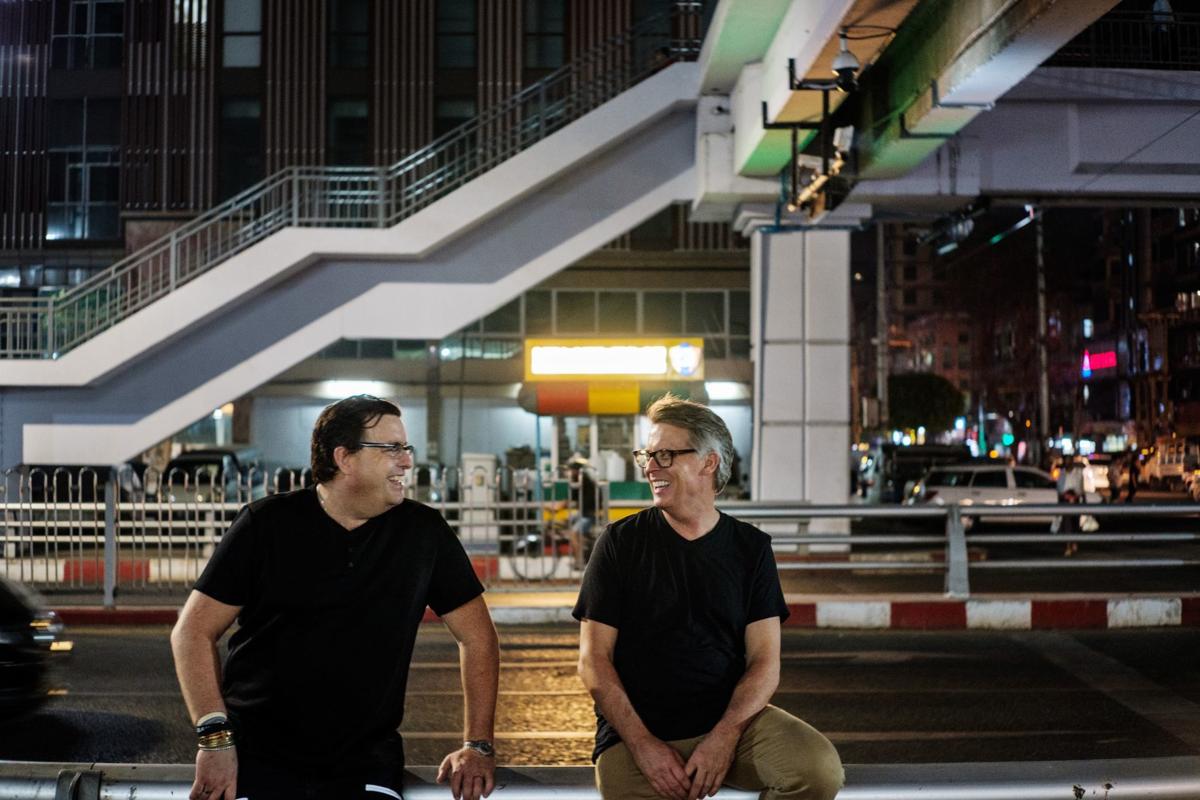 Craig Martin (left) of Richmond and Earl Bridges of Charleston, S.C., are hosts of the new PBS series “The Good Road.” Martin, 53, and Bridges, 54, have reported stories from all around the world, including Yangon, Myanmar, in this photo. 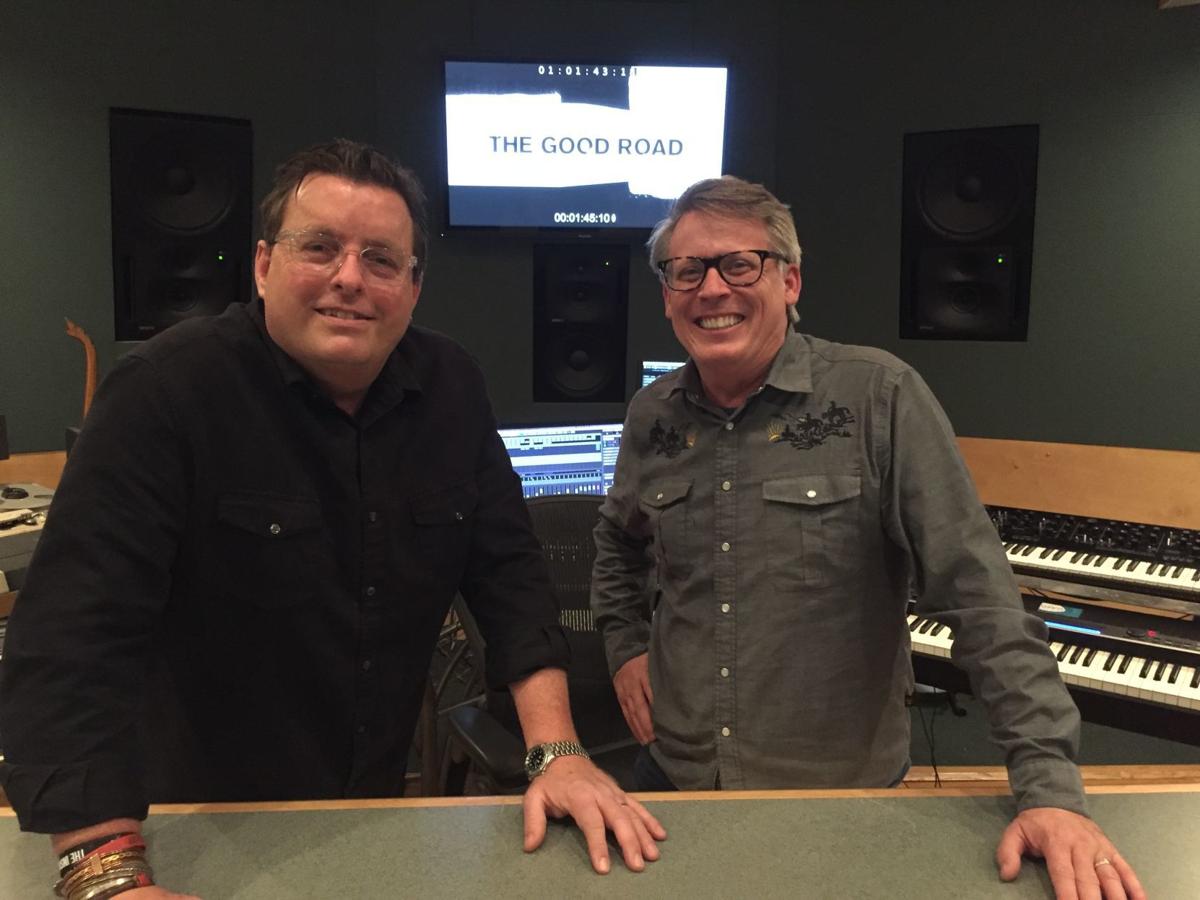 Craig Martin, (left) of Richmond, and Earl Bridges, hosts of the new PBS series “The Good Road,” have reported stories from all around the world. They are show here during a visit on Feb. 20, 2020, to Richmond's In Your Ear Studio, where audio post-production is handled as well as the podcast for the series.

Craig Martin, (left) of Richmond, and Earl Bridges, hosts of the new PBS series “The Good Road,” have reported stories from all around the world, including a slum in Bangkok in this photo.

Craig Martin (left) of Richmond and Earl Bridges of Charleston, S.C., are hosts of the new PBS series “The Good Road.” Martin, 53, and Bridges, 54, have reported stories from all around the world, including Yangon, Myanmar, in this photo.

Craig Martin, (left) of Richmond, and Earl Bridges, hosts of the new PBS series “The Good Road,” have reported stories from all around the world. They are show here during a visit on Feb. 20, 2020, to Richmond's In Your Ear Studio, where audio post-production is handled as well as the podcast for the series.

They grew up in Thailand, the children of missionaries, and became best friends in high school.

They went their own ways, spent their careers in technology and philanthropy, storytelling and travel and have now reunited for the project of their lives: hosting a global travel television show on people doing good work in remarkable (and sometimes dangerous) ways and places.

And there’s a Richmond connection.

“The Good Road” premieres on PBS in April, and I found Earl Bridges and Craig Martin the other afternoon at In Your Ear Studios in Shockoe Bottom, working on the series — and sharing the fun they clearly have putting this thing together.

Martin, 53, who worked for many years at the International Mission Board and lives in Carytown, laughed.

But at the same time, said Bridges, 54, who has started tech companies from nothing, “This is by far the most emotionally challenging, difficult, financially challenging thing that we’ve ever done. There is so much fun. Absolutely. But I’ll tell you there are days I can’t sleep at all, and I don’t know how ... we’re going to do it. Now that we’re right there at the end ... I can’t believe this is really going to happen.”

It is, indeed. After three years of pitching and digging, travel and filming, the show launches nationally on April 6 (though check local listings) and will continue for eight episodes. A second season is being planned.

Besides the slickly produced conventional show — I’ve seen the trailer and they showed me part of the first episode — that features stunning visuals and cool music, there will be a companion podcast, delving into each episode more deeply, as well as a virtual reality component that is also in the works with Mark Lambert of Richmond-based VArtisans.

“We may not be the best travel show in the world ... but we’ll be the most expensive,” Bridges said with a laugh.

Bridges and Martin seem like great guys to hang out with, which comes shining through in the snippets of shows I’ve watched: self-deprecatingly funny, genuinely curious and apparently fearless.

The program is essentially a travel show with the underlying thread of finding people doing good work — sometimes a messy business, as they say — to help others in places a lot of others don’t go. Martin recalled the original pitch Bridges made to him for an “[Anthony] Bourdain-style show, but in the context of the heroes not being chefs. The heroes are the people being philanthropists. I’m like, ‘Oh, my gosh, I love this idea.’”

The first season includes visits to such places as Tanzania, Myanmar and Alabama Village, a violent community outside Mobile, Ala.

“No one’s getting Marriott points for any of this stuff that we’re doing,” Bridges said.

Behind the humor and laughter, Bridges and Martin have a heart for this kind of work. Beyond their childhoods, in which they grew up intimately familiar with the selfless work of their parents in exotic places, each carved out careers that reflected those themes.

Bridges, who now calls Charleston, S.C., home, was a technology entrepreneur, specializing in, as he describes it, “global nonprofit and corporate social responsibility initiatives.” He’s spent the last decade helping corporations and foundations identify and become involved with worthy causes. His father was a Vietnam-era Air Force pilot who returned to Southeast Asia as a missionary, which is how he met Martin.

Martin was born in Bangkok. He spent 25 years with the International Mission Board jobs — as a video and film producer, director, writer and editor and finally as managing director of communications — that carried him to more than 80 countries and put him in touch with people doing good work under often difficult circumstances.

He also has produced the feature-length docudrama “The Insanity of God” (and he and Bridges are executive producers of “Free Burma Rangers,” a documentary being screened in theaters nationally this month).

When his IMB job ended in 2016, Martin found himself looking for work and in touch again with Bridges. “We had not really hung out or seen each other since we were playing basketball at the International School of Bangkok,” he said.

Bridges invited him to join him on a new project — the concept that would become “The Good Road” — and Martin wanted in. They started calling themselves “philanthropologists” and got to work. All along the way, they were buoyed by the reaction of people they shared the idea with who said, “This is exactly what the world needs now ... positive storytelling in a way that people really engage with.”

“All we’re saying is, there’s good all over,” Bridges said. “There’s good everywhere. The reason you only see stars at night is because you need that contrast. So you pitch [the show] into an area that feels really hard to understand, and as your eyes adjust, then you start finding these great people doing everything. Anyplace [stuff] has happened, there are people trying to help.”

However, Bridges and Martin are sensitive to the optics of two white guys dropping into different countries to report about people of color.

“We never want to pretend that we speak for the people we interview,” Martin said. “We are just the conduit to let them tell their own story.”

For the first episode, they return to their old stomping ground, Thailand, where they tell three stories of good works, including one about a proposed government project that would displace residents along Bangkok’s Chao Phraya River where people have lived for more than a century.

In the opening scene, Bridges and Martin are sitting at a Bangkok noodle shop — one of their hangouts during high school — eating late-night noodles, drinking beer and setting the stage for the series itself.

“The biggest danger is you create a travel show that looks like every other travel show,” Bridges says.

Replies Martin, “I think it’s an idea that is going to resonate with people.”

They raise their glasses to each other.

And the adventure begins.