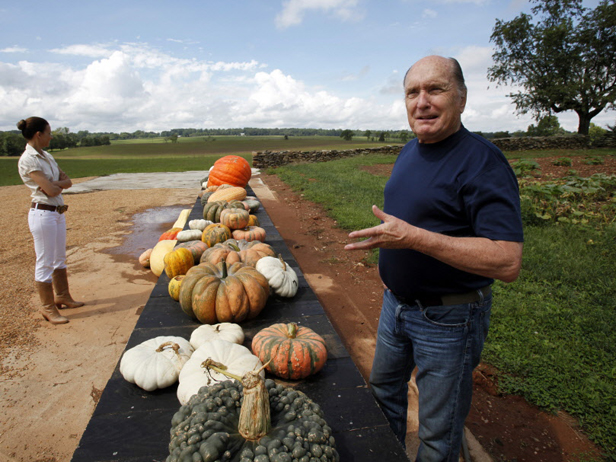 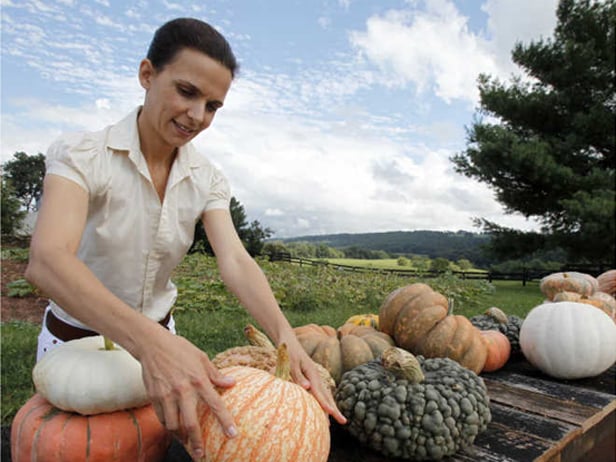 Luciana Duvall displays some of the harvest from Bubbles' Garden on the couple's rural Virginia farm. Robert Duvall says his wife loves their place.

Luciana Duvall displays some of the harvest from Bubbles' Garden on the couple's rural Virginia farm. Robert Duvall says his wife loves their place.

The familiar figure walked into the living room of his home and greeted a pair of strangers with the sort of geniality most of us reserve for people we actually know.

"What's up! Good to see you!" he said, grasping my right hand. "Bobby Duvall. How are you?"

In a world of self-important celebrities, Robert "Bobby" Duvall, one of the great American actors of our time, exudes an authentic, down-to-earth manner, whether he's telling a funny story about Marlon Brando, one of his acting heroes, or expressing gratitude for the more recent fertilizing work of Bubbles the Elephant on behalf of his farm's pumpkin patch.

"That whole pumpkin patch was her domain while she was here," Duvall said of Bubbles, who resides in a wildlife preserve in South Carolina and came to Duvall's place last spring for an event involving his charity, the Robert Duvall Children's Fund. "I don't know much about elephants, but she was terrific."

The legacy of Bubbles' visit is a bumper crop of pumpkins of all shapes and sizes on display a few hundred yards from the main house on a 360-acre farm in Fauquier County. Duvall shares the home with his wife, Luciana, an Argentine actress and director who also shares his birthday, Jan. 5, though 41 years apart.

As delighted as he was with the pumpkins, the 80-year-old actor stays busy with more than what grows in what he and Luciana call Bubbles' Garden.

Not slowing at all, Duvall stars in the recently released "Seven Days in Utopia," the story of a talented young golfer who loses his way on the course and in life, and finds himself in Utopia, Texas, where he meets an eccentric rancher who provides guidance and wisdom. Duvall plays the rancher.

Earlier in the summer, Duvall finished shooting a movie in Georgia with Billy Bob Thornton ("the hillbilly Orson Welles," as Duvall admiringly describes him) that is titled "Jayne Mansfield's Car" and focuses on the culture clash of two families from different countries.

"The most unique script I've ever worked on," said Duvall, wearing a navy-blue shirt, blue jeans and cowboy boots. "It's wacko time … but totally legitimate because families can be crazy."

As for Thornton, who wrote, directed and acted in it, Duvall said, "He's a character. A very, very gifted guy. That guy is great."

Versatile and prolific, Duvall has played scores of roles for big screen and small.

He has performed in movies of great acclaim — including "The Godfather," "True Grit" and "M*A*S*H" — and uttered some of Hollywood's most iconic lines, such as "I love the smell of napalm in the morning," as the intense and surfing-obsessed Lt. Col. Bill Kilgore in "Apocalypse Now." Next year is the 50th anniversary of his first movie role: the reclusive Boo Radley in "To Kill a Mockingbird."

His characters have been tough and funny, gentle and odd, likeable and not. He doesn't care; he just wants them to be interesting, which is why he insisted writers give his character in "Utopia" a bit of an edge after he read the original script and declared the rancher "too white-bread." He is unafraid to take chances, even singing in "Tender Mercies" (1983) in which he played a recovering alcoholic country music singer, a role for which he won his only Academy Award for Best Actor.

His favorite role? Gus McRae in the remarkably good 1989 television miniseries "Lonesome Dove." He had a woman from Texas tell him she refused to let her future son-in-law marry into the family until he watched "Lonesome Dove."

His best work? He rarely watches his movies, but about six months ago he went to the shelf and pulled down "Stalin," a made-for-TV movie from 1992 in which he starred.

"That final scene where I played Stalin," Duvall said, "that's as good as I can do."

Ruthless Soviet dictators are one thing, but Duvall's heart lies with Westerns. He would like to do more, he said, and not only because the barbecue on Western locations is mostly superb.

"That's our genre," he said. "The English have Shakespeare, the French Molière and the Russians Chekhov. The Western is ours.

Born in San Diego, Duvall fell in love with the cowboy West on childhood visits to an uncle's ranch in Montana. He and his brothers would ride horses and camp out, listening to the stories of the pioneers who settled the region and the Native Americans who were displaced.

Duvall also spent considerable time on the East Coast. His father was a graduate of the U.S. Naval Academy and an officer during World War II, so the family alternated living in San Diego and Annapolis, Md., which offered a different lifestyle from Southern California.

"I remember my brother would go down and catch six soft-shell crabs, right from the creeks there, and my mother would cook them," he said. "You cannot beat that."

Duvall's parents nudged him into acting when nothing else in school seemed to click. After a stint in the Army, he attended drama school in New York on the G.I. Bill. He scuffled for a while looking for work with his roommate Dustin Hoffman and one of his best buddies, Gene Hackman.

Things, you might say, worked out for all of them.

Duvall has lived among the rolling hills of Northern Virginia hunt country for most of the past two decades, which is appropriate since he has Virginia roots. His father grew up in the Lorton area, and his mother was related to Gen. Robert E. Lee ("Yeah, but so is everybody else in Virginia," Duvall says with a laugh). He also noted that despite his Southern heritage, his father's family during the Civil War were pro-Union farmers behind Confederate lines. His grandfather was named Abraham Lincoln Duvall.

Duvall liked "the vibes" in Virginia, in part because he had a brother living in Alexandria. Duvall lived for a short while in Loudoun County before acquiring the farm where he now lives.

"My wife says for her, Virginia is the last station before heaven," Duvall said, laughing. "She loves it here. We like Texas, but we like living here."

He has not been afraid to become involved in community spats regarding development. He stepped into the spotlight soon after moving to the area to oppose a proposed Walt Disney park in Prince William County in 1994. A dozen years later, he lent his face and voice to a landowner battle against a multistate power line. More recently, he stood up publicly against Wal-Mart Stores Inc. and its plan to build a store in Orange County near the Wilderness Battlefield. Ultimately, the retailer withdrew its proposal.

Not all of his community engagement is contentious. He shows up in places such as the Red Truck Rural Bakery in Warrenton and hangs out with the locals and visitors. At Red Truck, which turns out goodies such as double-chocolate moonshine cake in a building that formerly housed an Esso filling station, Duvall is even on the menu: Bobby's Breakfast in a Box is a collection of coffee cake, bread, coffee and homemade granola the Duvalls likes to send to friends and relatives.

Bakery owner Brian Noyes describes the Duvalls as "charming," and he related how a couple from out of town showed up at the Red Truck the other week because their son in Warrenton had told them about Duvall and his occasional visits. A few minutes later, Duvall walked in and sat next to them.

"Sure made their day," Noyes said of the couple. "The guys talked movies for half an hour."

A portion of every purchase of Bobby's Breakfast in a Box goes to the Robert Duvall Children's Fund, which aims to improve the lives of impoverished children and their families throughout Latin America, India and the United States. Duvall occasionally hosts lectures, dinners and dances in his barn — the structure is appointed more for parties than critters, and features a saloon-style bar that would have fit right in on the set of "Lonesome Dove" — to raise money for the organization.

Duvall still rides horses, but not nearly as often as he used to, and he requires "a pretty bomb-proof horse."

"You've got to be careful because they're not machines," he said. "They don't love you like a dog."

But he's not looking for hobbies, just work. Good work. He still receives a steady supply of scripts. Some good, some not so much. He would love to do something different, though he doesn't know quite what that might be considering the variety of his experiences. But he's open to suggestions.

"Sometimes you plan something, then something else will come around the corner to surprise you," he said. "I still get a kick out of doing this, so I don't feel like I'm jaded so that I can't find something that's new and fun to do."

Duvall has been acting so long and so well, did he ever think about what he might have done for his life's work if not for acting?

"I don't know what I'd done if I hadn't gone into this business," he said. "Maybe a not-so-successful high school football coach? Maybe (own) a ranch out west? That's a good question. I think about that."