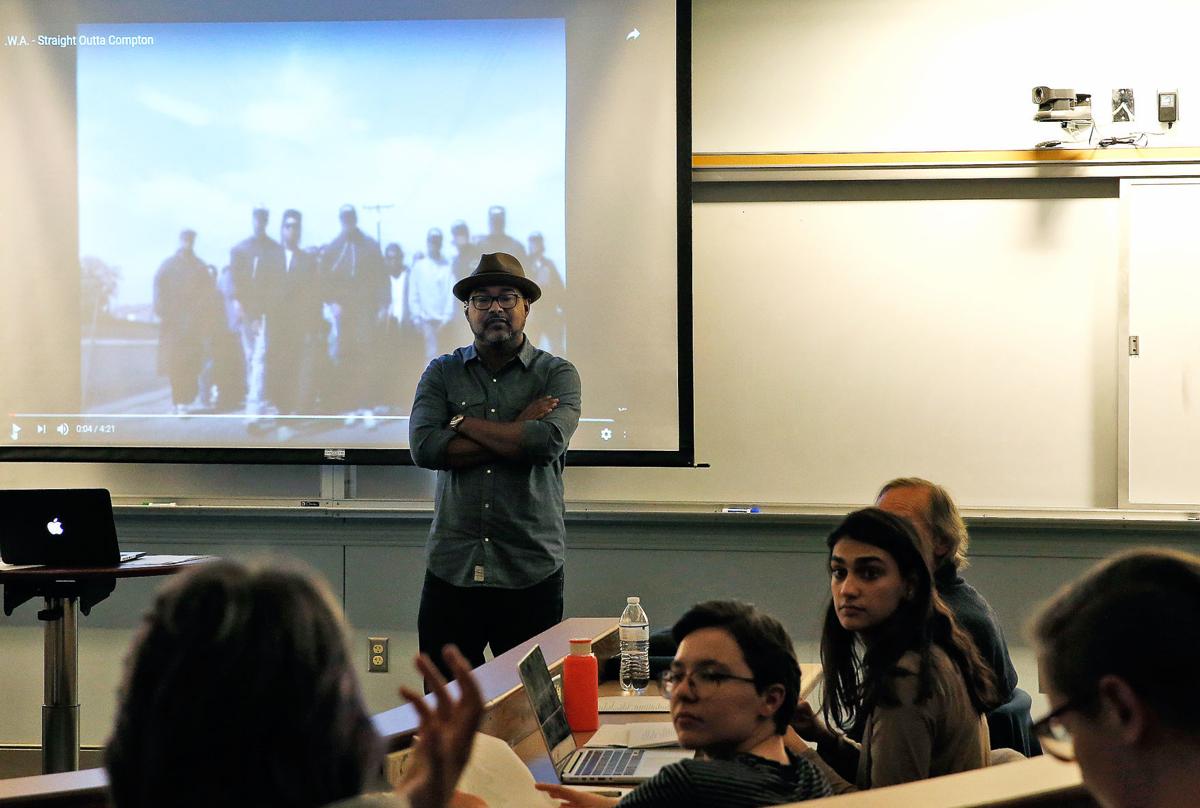 Former rapper Mad Skillz, aka Donnie Lewis, was brought in to co-teach a hip-hop class at the University of Richmond. “I hope that the students get a better understanding of the culture,” Lewis said. 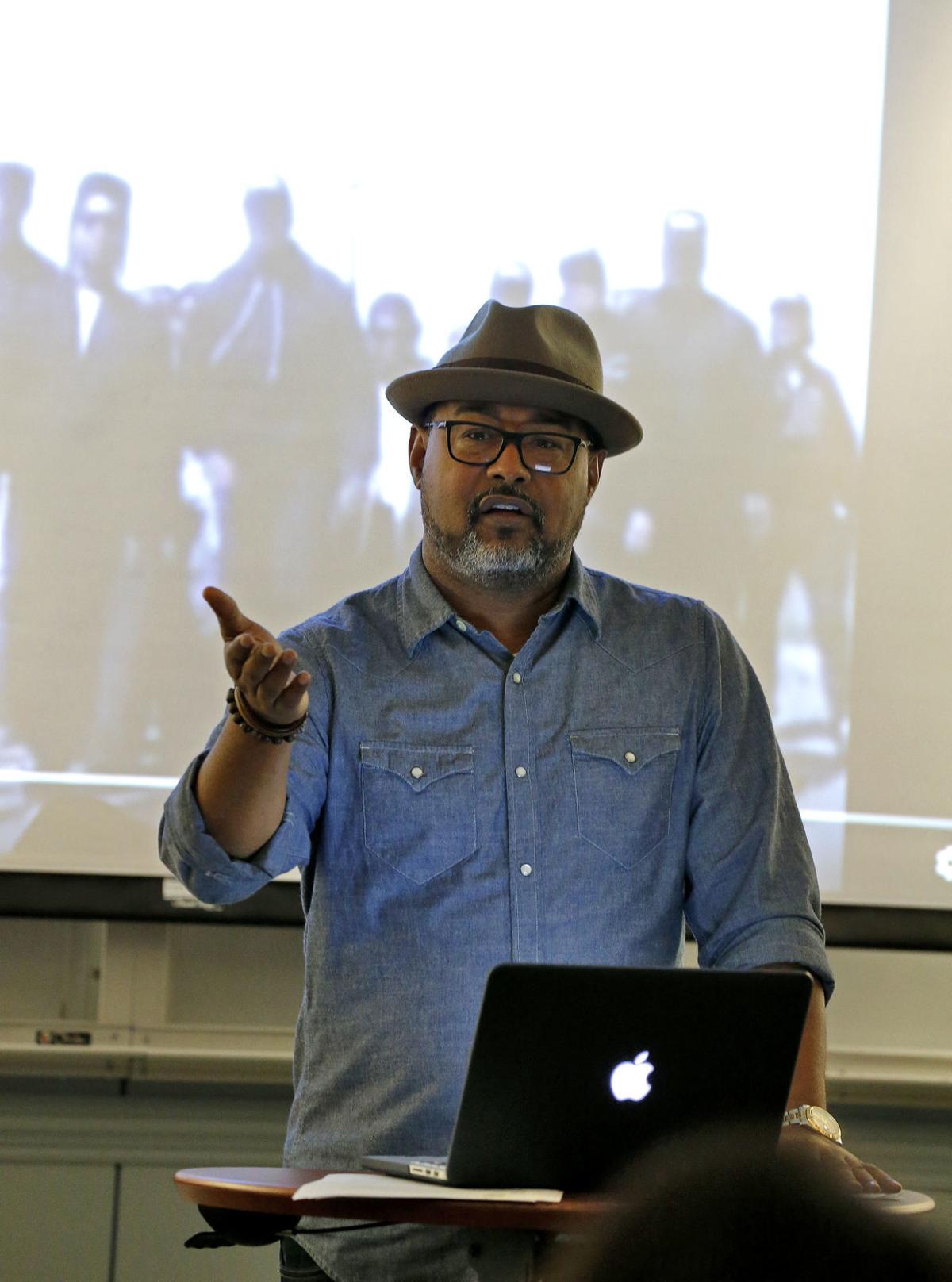 Mad Skillz, aka Donnie Lewis teaches a class on hip-hop at University of Richmond Mon. Jan. 29, 2018. 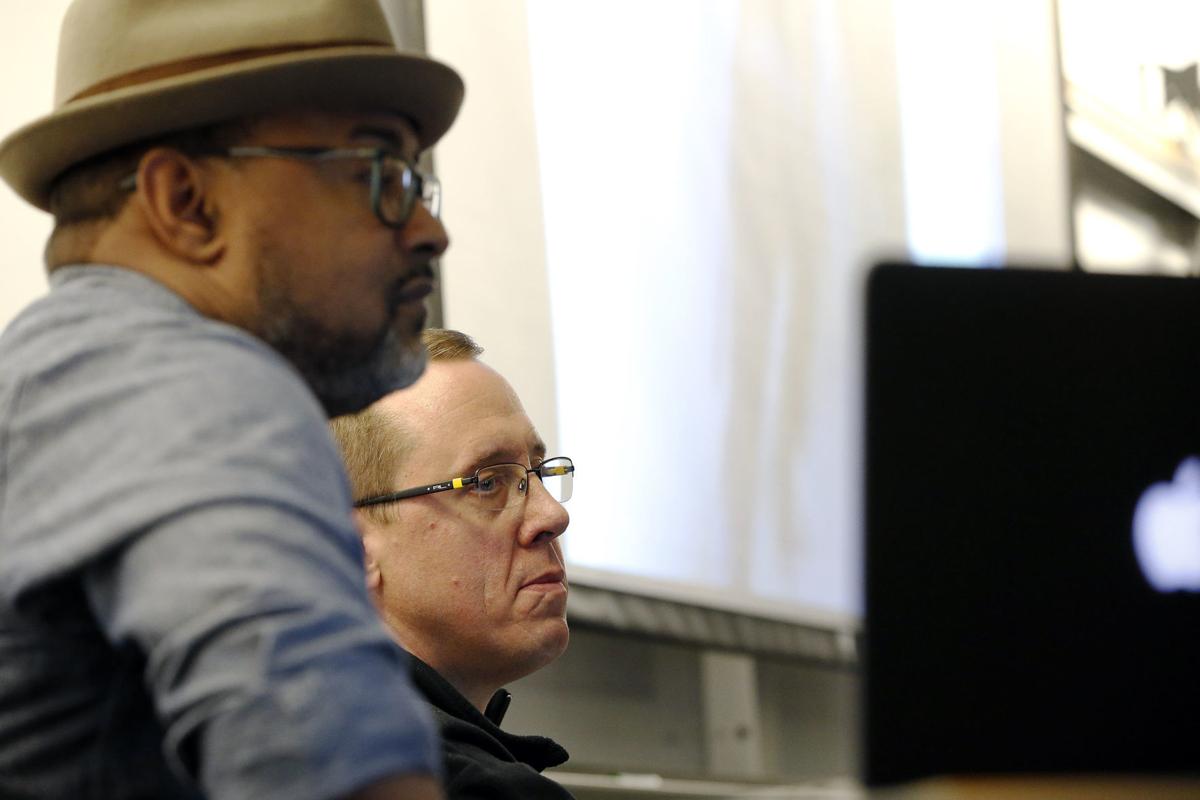 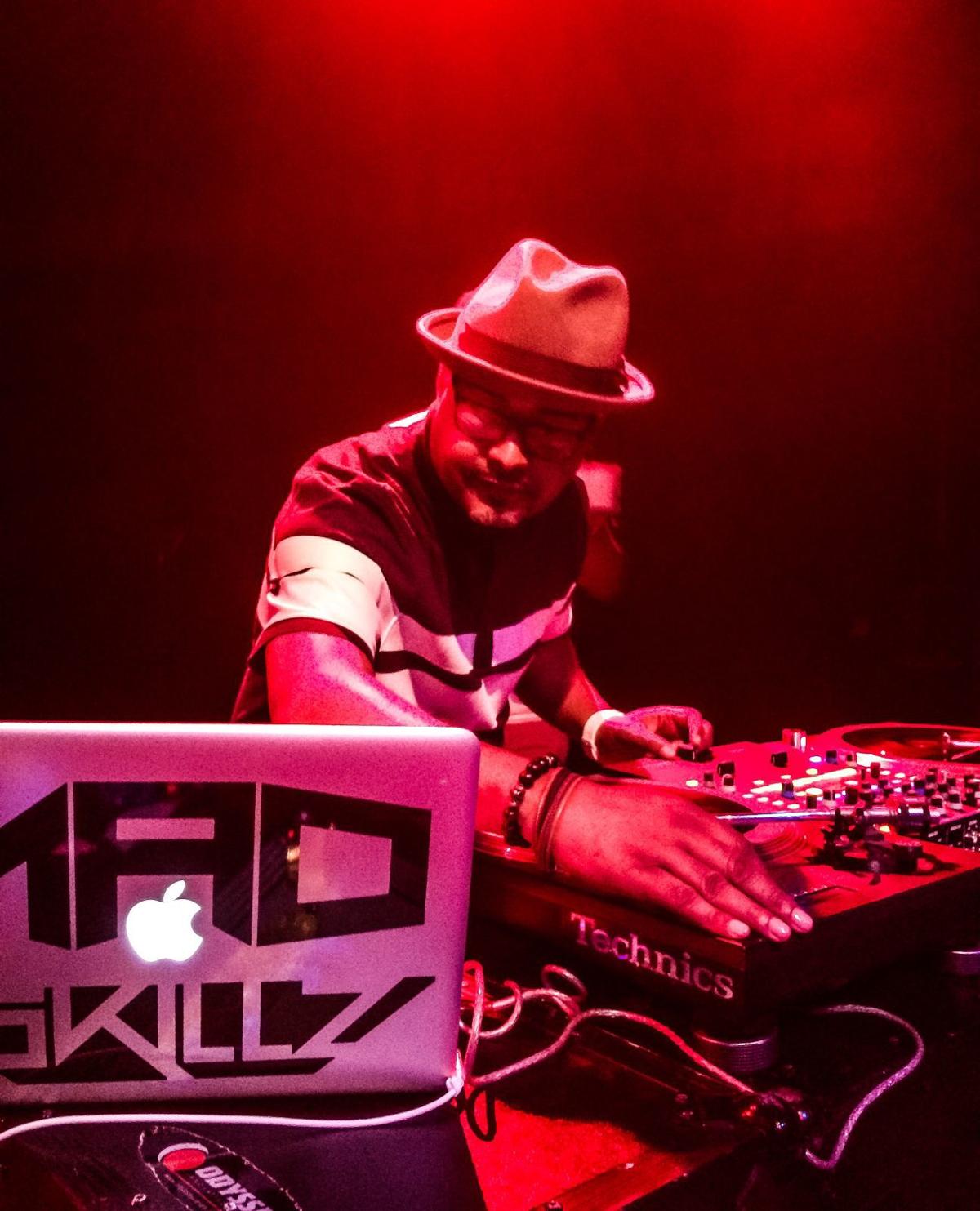 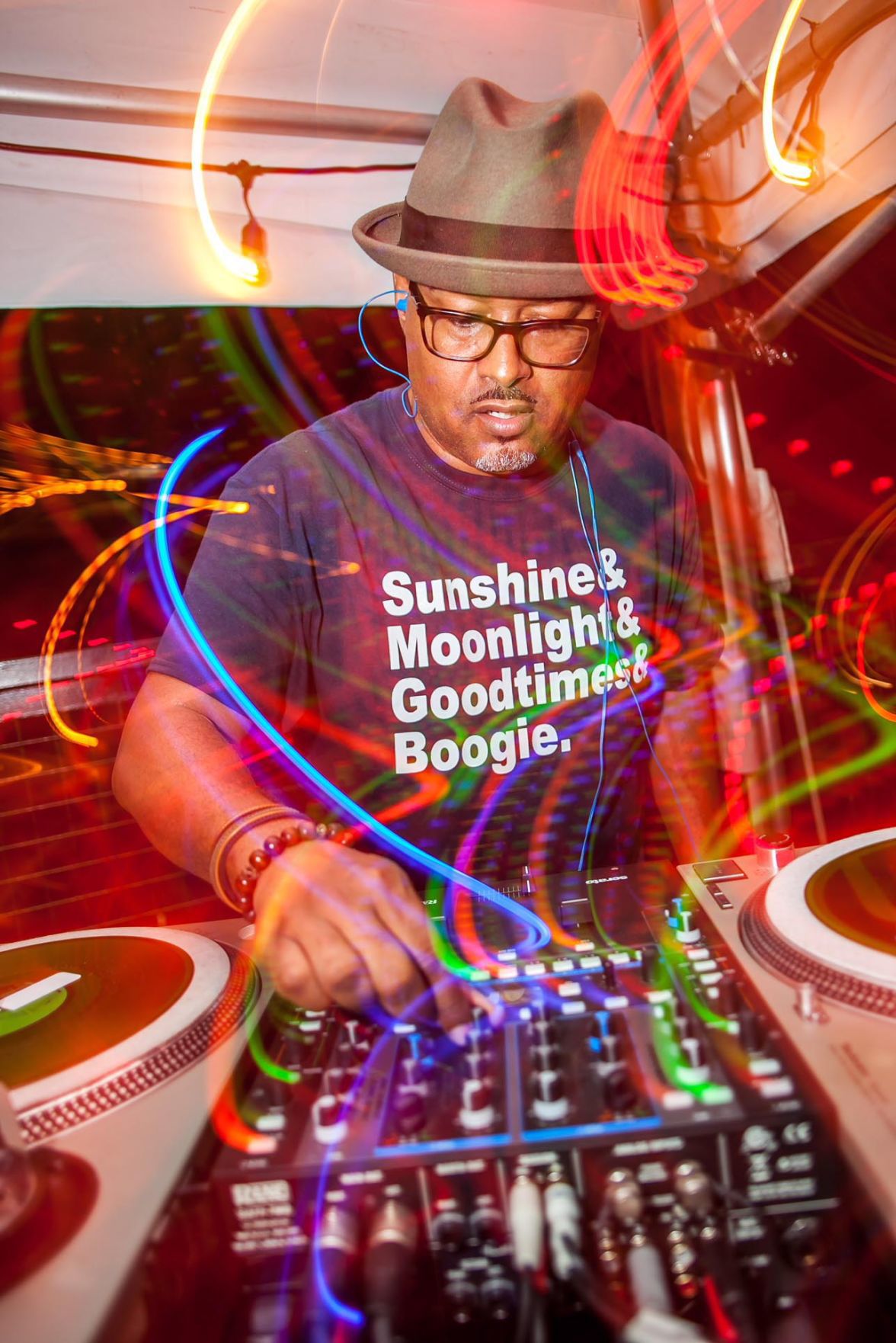 Being in front of a classroom instead of a turntable is a different experience for Mad Skillz, who is co-teaching a hip-hop class at UR.

Former rapper Mad Skillz, aka Donnie Lewis, was brought in to co-teach a hip-hop class at the University of Richmond. “I hope that the students get a better understanding of the culture,” Lewis said.

Mad Skillz, aka Donnie Lewis teaches a class on hip-hop at University of Richmond Mon. Jan. 29, 2018.

Being in front of a classroom instead of a turntable is a different experience for Mad Skillz, who is co-teaching a hip-hop class at UR.

On a rainy Monday night, a diverse group of students file into a classroom at the University of Richmond.

There are white students, black students, a group of basketball players, a middle-aged mom and a 69-year-old man who is auditing the class.

They are here to study hip-hop from co-teachers Erik Nielson, a university professor, and the School of Professional and Continuing Studies’ first artist-in-residence, Mad Skillz.

They talk about graffiti and listen to songs by rap group N.W.A.

Their syllabus for the semester says, Listen to Ice T, Geto Boys and Ice Cube.

Hip-hop started in the streets of the Bronx in the 1970s and grew as a cultural movement to include music, rap, DJ-ing, dance and fashion. Nielson talks about hip-hop like African-American literature or Shakespeare, which he teaches at the university as well.

“You can trace a rap song back to the antebellum South, to the slave songs and the blues,” Nielson says.

He hands out the lyrics to N.W.A.’s “Straight Outta Compton.”

As I leave, believe I’m stompin’

But when I come back boy, I’m coming straight outta Compton

“N.W.A. changed the face of rap forever,” Skillz says, when it’s his turn at the lectern. “Up until then, it was party rap. Like, ‘I just want to have fun.’ But N.W.A. was social commentary. It was vulgar; it was disrespectful to women, but it was honest and it scared you a little.”

Nielson and Skillz make an interesting tag team. Two men in their early 40s with a fascination for hip-hop.

Nielson is the academic mind behind the operation. A seven-year-veteran at UR, he’s written about hip-hop for The New York Times and The Washington Post. And he’s published a book titled “The Hip Hop & Obama Reader.”

Skillz is the real-life hip-hop professional. He’s been a rapper, a producer, a DJ and a songwriter.

This is the first time UR’s School of Professional and Continuing Studies has had a rapper as an artist-in-residence.

Born in Detroit, Skillz grew up in the Richmond area. He graduated from Kennedy High School for Technology, which later merged with Armstrong High School.

He got his start at the radio station at the University of Richmond, even though he wasn’t a student. He started rapping and released “From Where???” from Atlantic Records in 1996.

“My name started floating around in the industry, like work for hire, helping people with songs and lyrics,” he says. He began ghostwriting, but as a ghostwriter, he didn’t get credit for his work.

He did get a writing credit on Will Smith’s “Lost and Found,” released in 2005. And more recently, he worked with Nicki Minaj on her Grammy-nominated album “The Pinkprint.”

Nowadays, he splits his time between Richmond and Los Angeles.

He is currently working on a DJ album (think Calvin Harris or Diplo). He released a new song, “I Just Wanna Dance,” to Spotify and SoundCloud last year.

“I stopped rapping,” he says. “But I’ve been DJ-ing a lot. This way, I can put out new material whenever I want.”

Locally, he’s known for the live show the Art of Noise created by Lonnie B. It was most recently held at The Broadberry in January.

And now he’s teaching, for the first time.

“It’s an experience. It’s different for me,” he says, of being in front of the classroom, instead of a turntable. “I hope that the students get a better understanding of the culture.”

One student, 69-year-old Martin Gary, decided to audit the class because his father ran a string of Gary’s record stores across Richmond.

“I’ve been in the music business all my life,” Gary says. “We sold all kinds of music. I remember when we first started selling rap on 12-inch vinyl. It was a very big deal.”

Having lived through the events covered in class, he says, it’s “mind-expanding” to view history through the lens of hip-hop.

“Hip-hop has only been around for 40 years,” Skillz adds. “But it’s the most popular form of music today.”

Public Enemy member & Mad Skillz to talk hip-hop at UR

A free hip-hop lecture and discussion

“I always felt like rap music was the pulse of the people. If you ever want to know what young black urban American is in tune to, all you have to do is listen to the music,” Skillz said.

“Hip-hop is a part of everyday life. This music has brought people together. It crosses color boundaries. People were just showing up because they were fans. It didn’t matter if you were black, white, Latino, Asian. That in itself is amazing,” Skillz said. "It’s the most popular form of music today. It has changed lives."