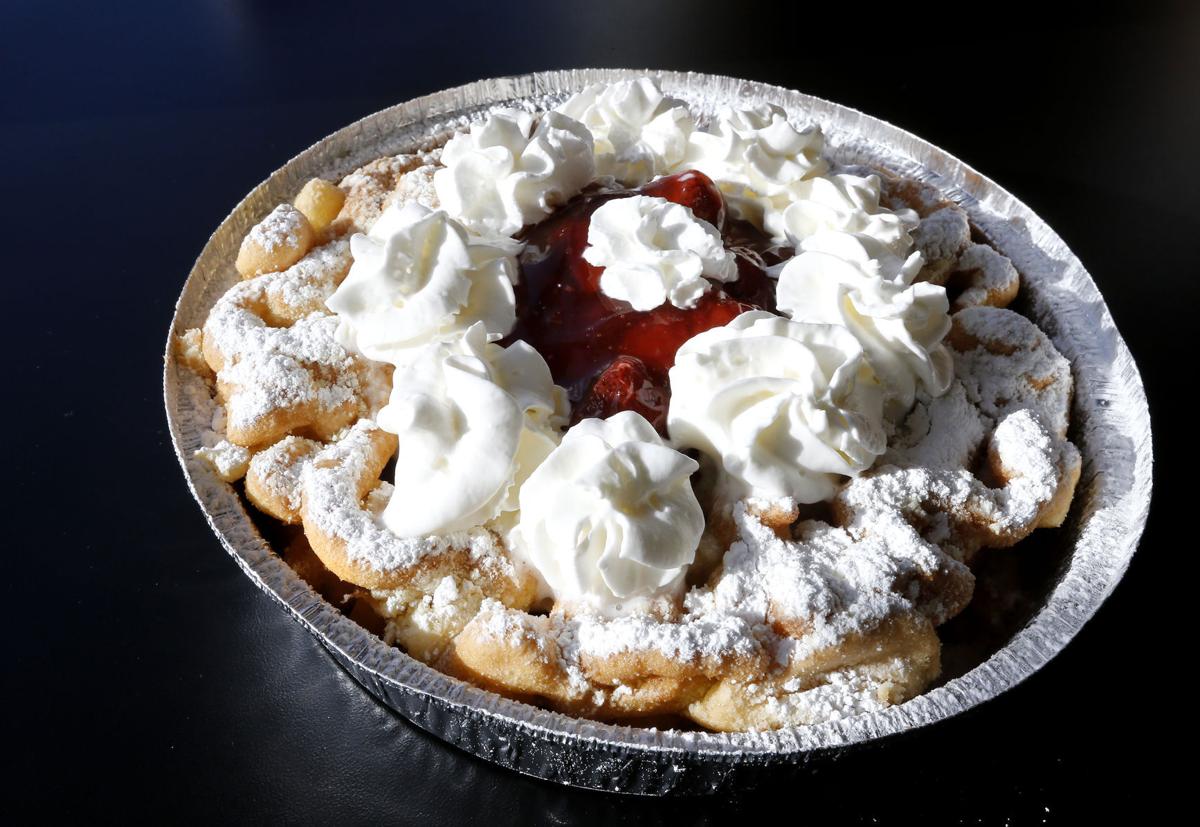 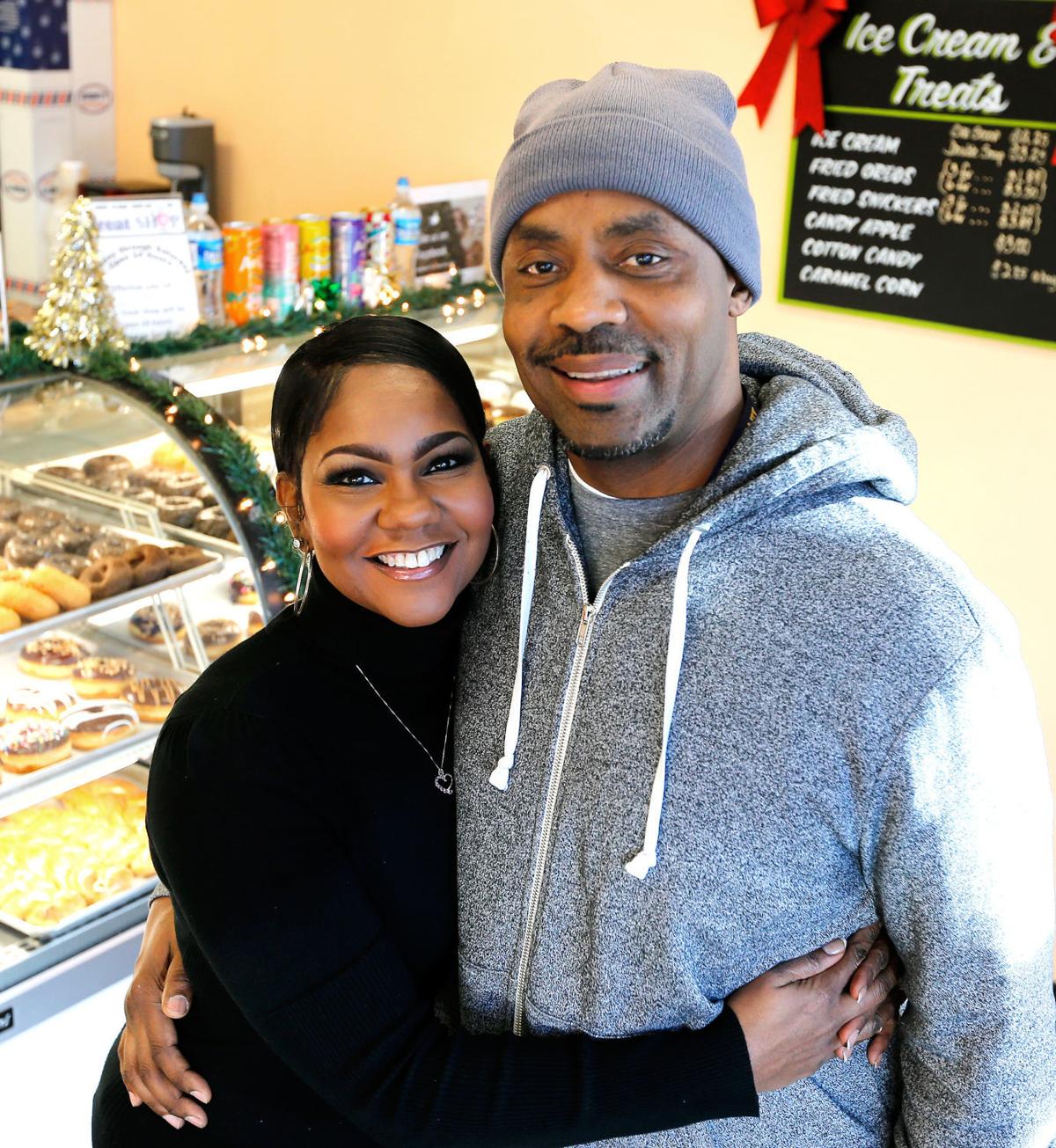 Essie and Shawn Davis have sparked some life into the area along Jahnke Road in South Richmond with The Treat Shop RVA, their bakery and lunch spot. 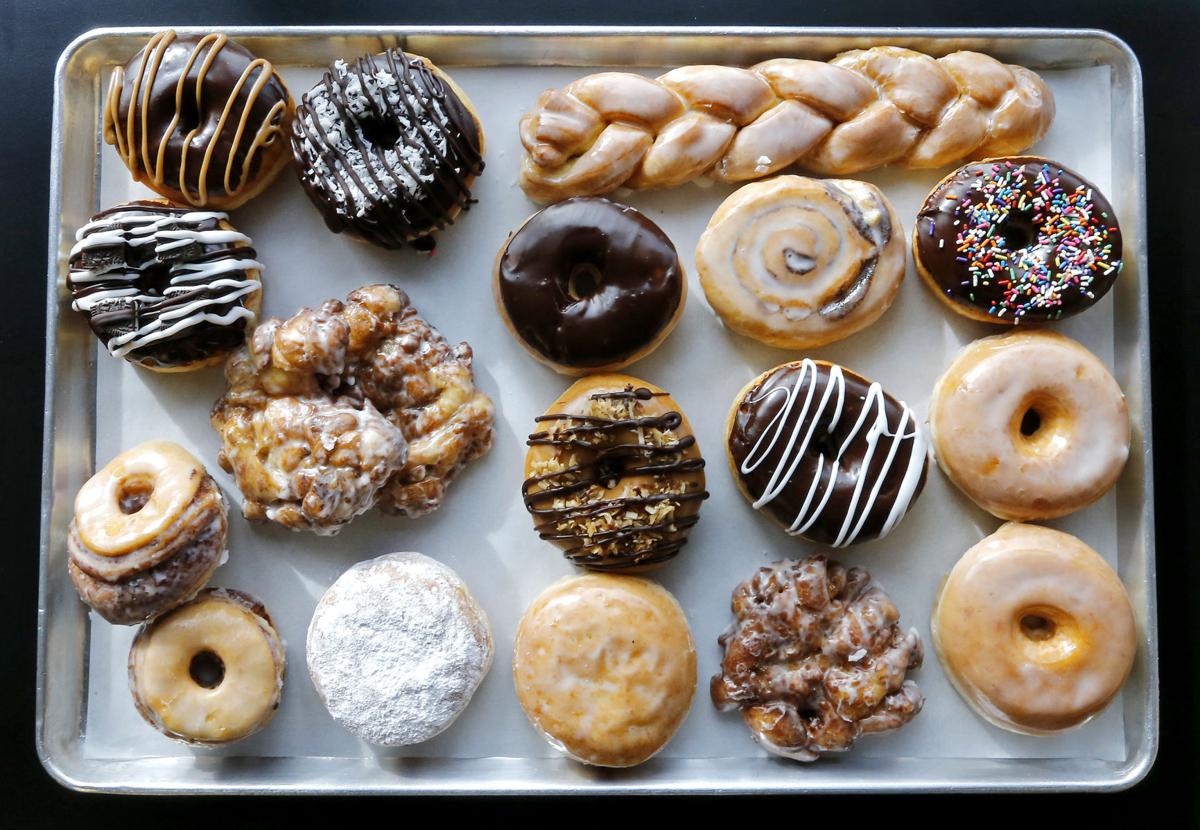 Walk into The Treat Shop RVA, and you’re greeted by over 15 varieties of yeast and cake doughnuts. 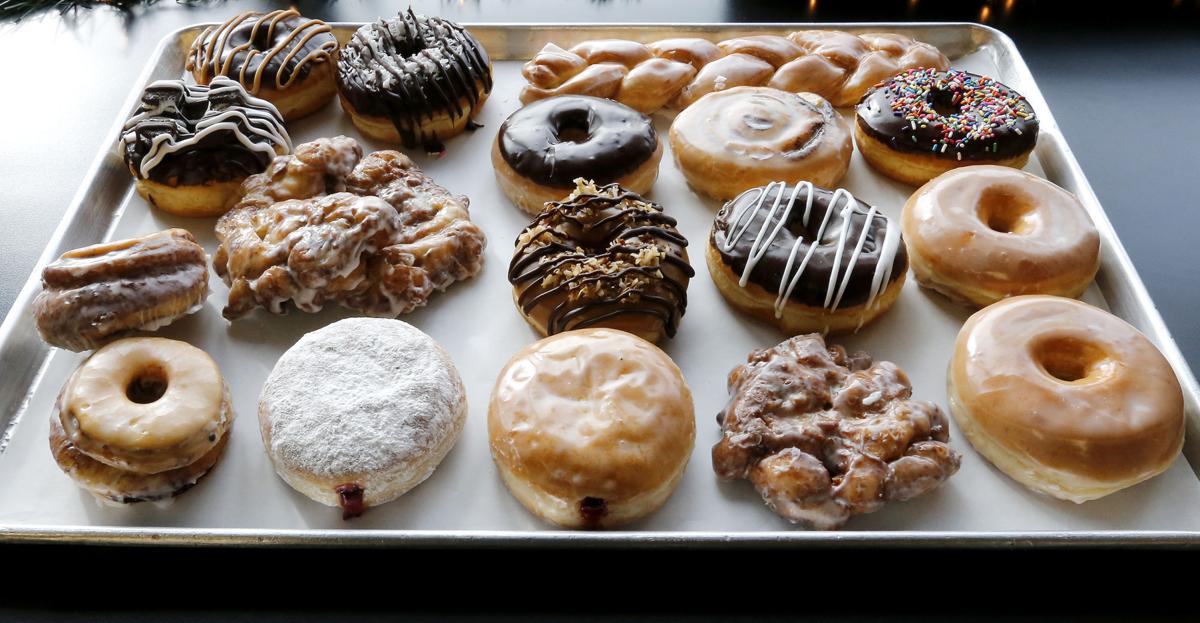 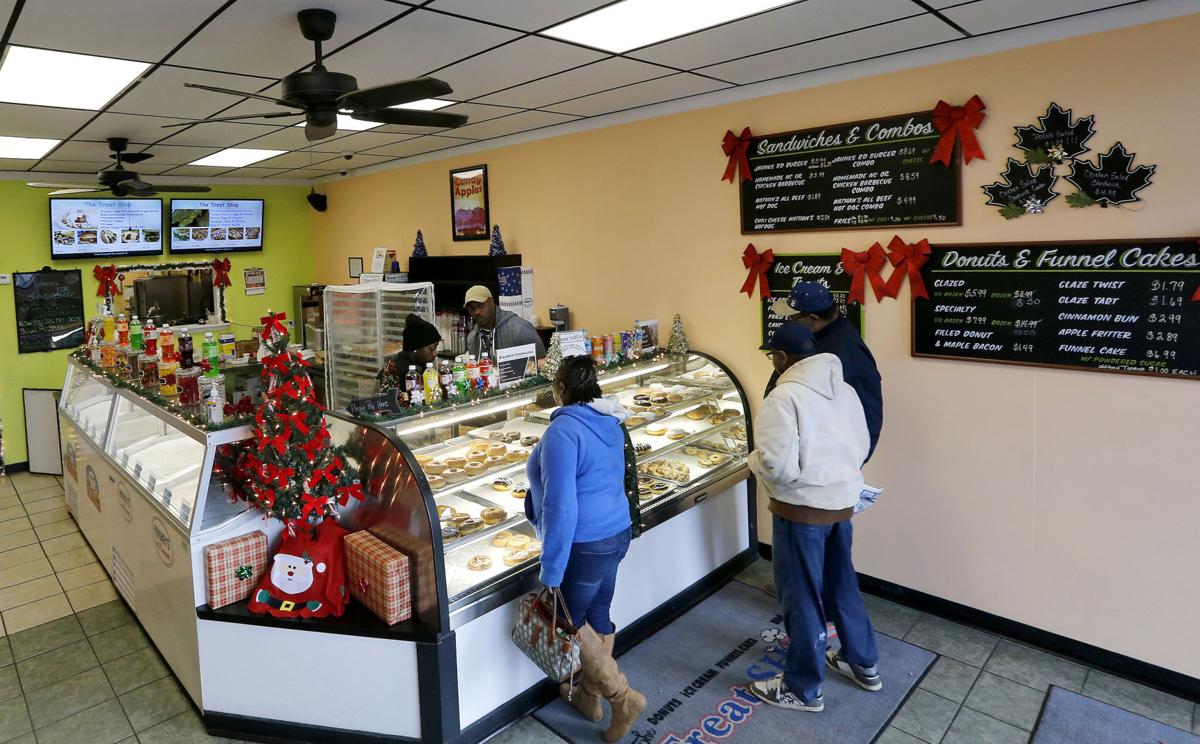 The Treat Shop RVA has the feel of a neighborhood joint, with the owners knowing many customers by name. 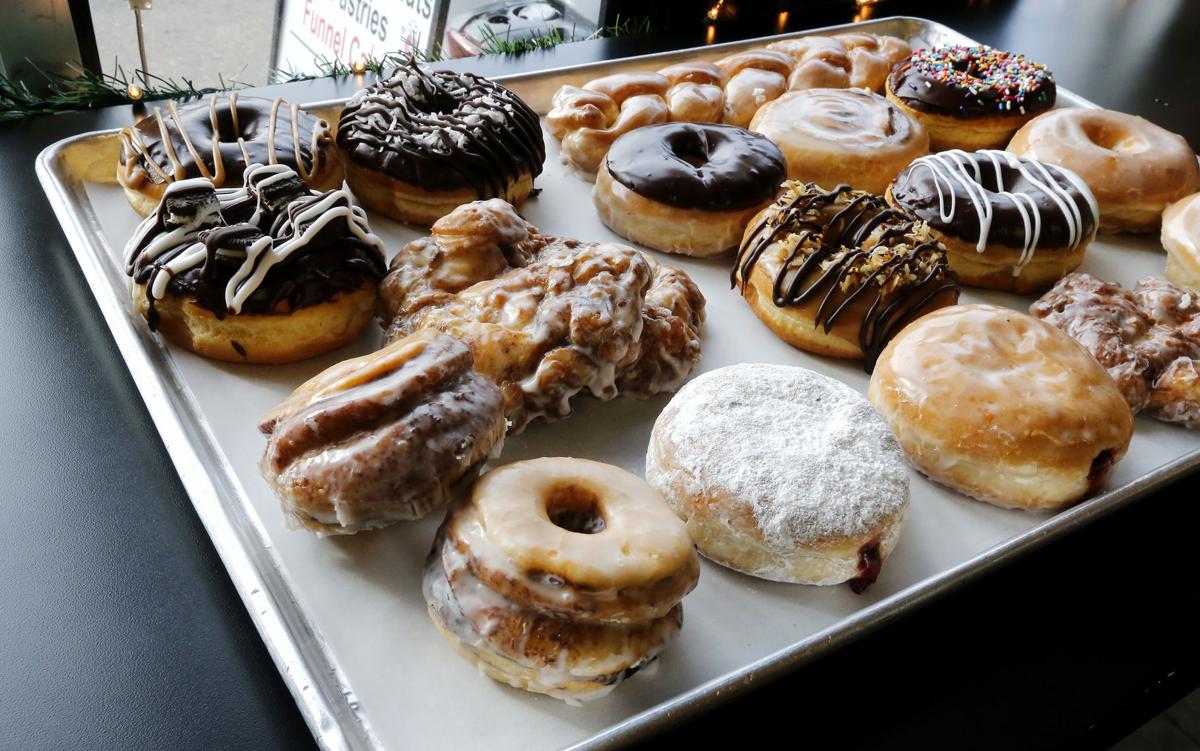 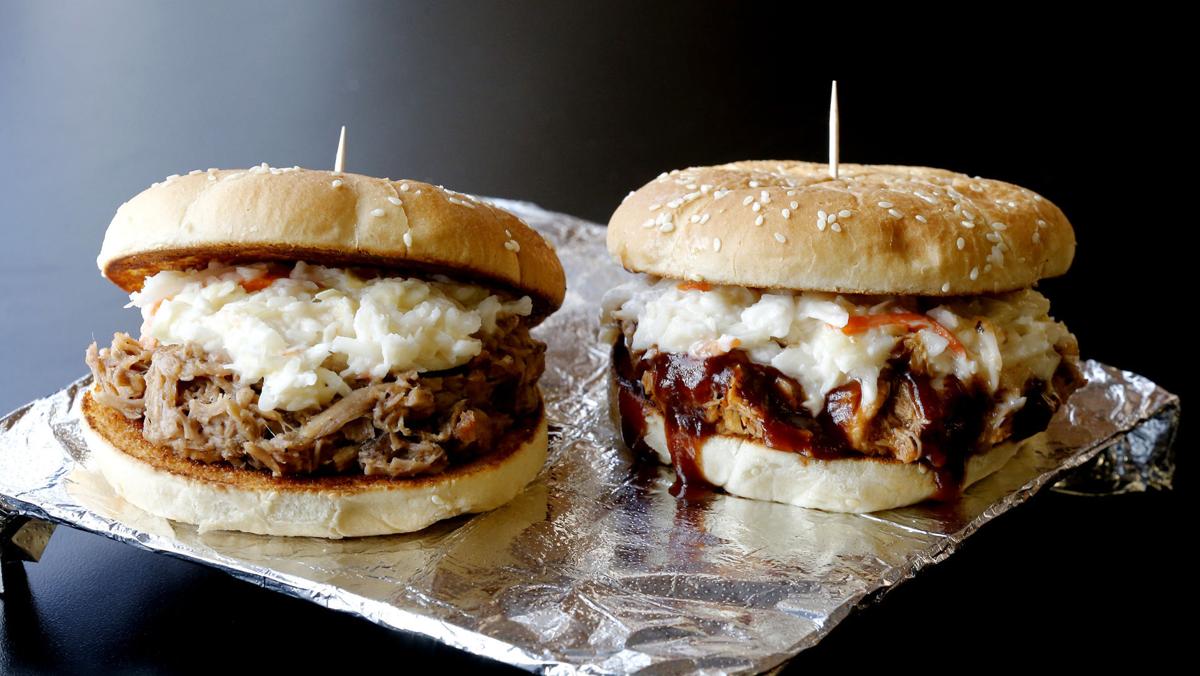 Barbecue sandwiches are part of the shop’s menu for lunch or a late meal. 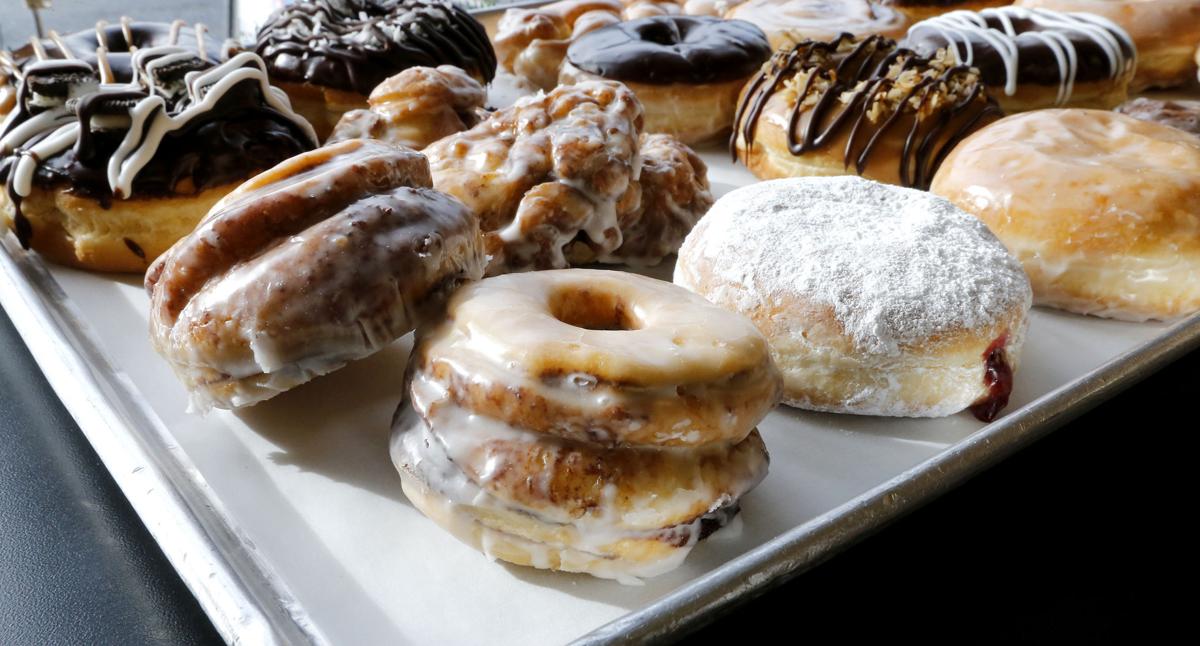 Essie and Shawn Davis have sparked some life into the area along Jahnke Road in South Richmond with The Treat Shop RVA, their bakery and lunch spot.

Walk into The Treat Shop RVA, and you’re greeted by over 15 varieties of yeast and cake doughnuts.

The Treat Shop RVA has the feel of a neighborhood joint, with the owners knowing many customers by name.

Barbecue sandwiches are part of the shop’s menu for lunch or a late meal.

Funnel cakes and carnivals go together like peanut butter and jelly. Hot from the fryer, slung onto paper plates that barely contain their crunchy tendrils and then doused with powdered sugar, they’re the sort of messy, finger-licking bliss that most people only find when carnivals or fairs come to town, or they make a special trip to an amusement park.

Except, it’s now what Shawn and Essie Davis serve up around the clock, six days a week at The Treat Shop RVA, a bakery and lunch spot tucked into a small shopping center along Jahnke Road in Richmond’s South Side.

Just follow the smell of fried dough from the parking lot.

Funnel cakes “any time you want” is the premise behind the shop, Shawn Davis said, though it’s become so much more than that. Upward of 15 varieties of yeast and cake doughnuts — including their signature cinnamon roll doughnut, with characteristics of both treats — fill their display cases and are covered in glazes and toppings of all kinds: maple bacon, Oreo cookies, caramel, chocolate and vanilla, plus jelly- and cream-filled doughnuts, large apple fritters, glazed cinnamon twists and more.

The doughnuts greet you, but walk around to the other side of the counter and you’ll find 24 flavors of Hershey’s ice cream, available by the scoop or in milkshakes. The made-to-order funnel cakes — the reason for the shop — are topped with powdered sugar, fruit glazes, chocolate sauce and whipped cream, or all of that and a scoop of ice cream. Fried Oreos and fried Snickers bars are on the menu, too, and if you’re so inclined, candy apples and cotton candy.

“I wanted to open up a location that primarily had all of the treats that the carnival and fair had,” Davis said, “without the rides.”

But there’s more. If you’re looking for lunch — or maybe a 2 a.m. meal — The Treat Shop RVA offers breakfast sandwiches complete with fried potatoes and onions, plus lunch options of coleslaw-topped North Carolina-style barbecue sandwiches, the shop’s signature chicken barbecue sandwiches, plain hot dogs and chili cheese dogs and more. If the shop is open, the full menu is available.

Blink and you might drive right by this place, though once you’ve been there, you won’t forget it.

A 17-pound “pillow” of doughnut dough rested on a covered cart in the back of the shop. With a little love and attention, it would eventually become more than 100 doughnuts, another round in the continuous doughnut cycle that keeps the display cases stocked, whether it’s 7 a.m. or 7 p.m.

The Treat Shop RVA opened in the fall of 2014. A disabled U.S. Navy veteran, Davis said he’s always had an idea about opening a place that caters to everyone’s favorite part of going to a fair or carnival — the food. His parents own a business nearby and when the shop’s space became available, the Davises jumped on it.

They gutted the place, which had been a cellular service store, built a kitchen in the back and started making funnel cakes and doughnuts and serving ice cream. Breakfast and lunch options came later, and they went to the six-day, 24-hour schedule last summer. Working with a staff of six plus themselves, they close up at 5 a.m. on Sunday mornings, and reopen at 6 a.m. on Mondays.

“We thought, wouldn’t it be great if there were some place you could go all year long and get a treat like that,” Essie Davis said. “People work hard; they deserve to treat themselves every once in a while.”

On a few recent mornings, the place buzzed with customers as holiday jazz music played overhead.

Davis grew up in South Richmond, and after college and five years in the Navy, he worked in sales and other jobs before opening his own shop. There was a lot of trial and error before he and his employees found just the right funnel cake and doughnut recipes.

One of those employees is Marcus Miller, who joined the shop more than a year ago after getting his pastry arts certification from Virginia College in Richmond. He came up with the cinnamon roll doughnut, now one of the shop’s best-sellers.

“I was just fooling around and I thought of doing something like the Cronut,” Miller said, referring to the croissant-doughnut hybrid trademarked by Dominique Ansel in New York in 2013. Miller’s doughnut contains layers of flaky pastry dough, filled with lots of cinnamon and glazed.

“I love baking,” Miller said, adding that he came to the shop for an externship “and I just kind of stayed here.”

“We kept him,” Shawn Davis quipped.

More than just a business, the shop has the feel of neighborhood joint, as the Davises know many of the customers by name.

People like Charles Taylor, whose preference for the shop’s cream-filled and jelly doughnuts means “I come in here about once a week,” he said.

“We have a lot of regulars now, (and) a lot of outsiders come in because the word spreads,” Shawn Davis said. “People love the funnel cakes, (and) our doughnuts are the best in the city.”

Essie Davis recalled a time when she was approached in a grocery store by a woman who said she kept smelling doughnuts, then realized it was Davis, who had come from the shop.

“It just starts conversations,” she said, adding that the shop is a constant source of surprise for people who don’t expect to see the funnel cakes and fried Oreos and other carnival fare.

In addition to the shop, the doughnuts are sold at McGuire VA Medical Center. Ten dozen are delivered there every morning. Davis said his long-term goal is to one day offer franchise opportunities for The Treat Shop RVA.

Essie Davis said the shop has sparked some life into their part of Jahnke Road, as well as brought jobs to the community. She said folks often come in for a doughnut, but stick around for more than that.

“If they’re having a bad day, they come in and they might chitchat,” she said. “It’s very difficult to be in a bad mood when you walk in and see all those treats.”