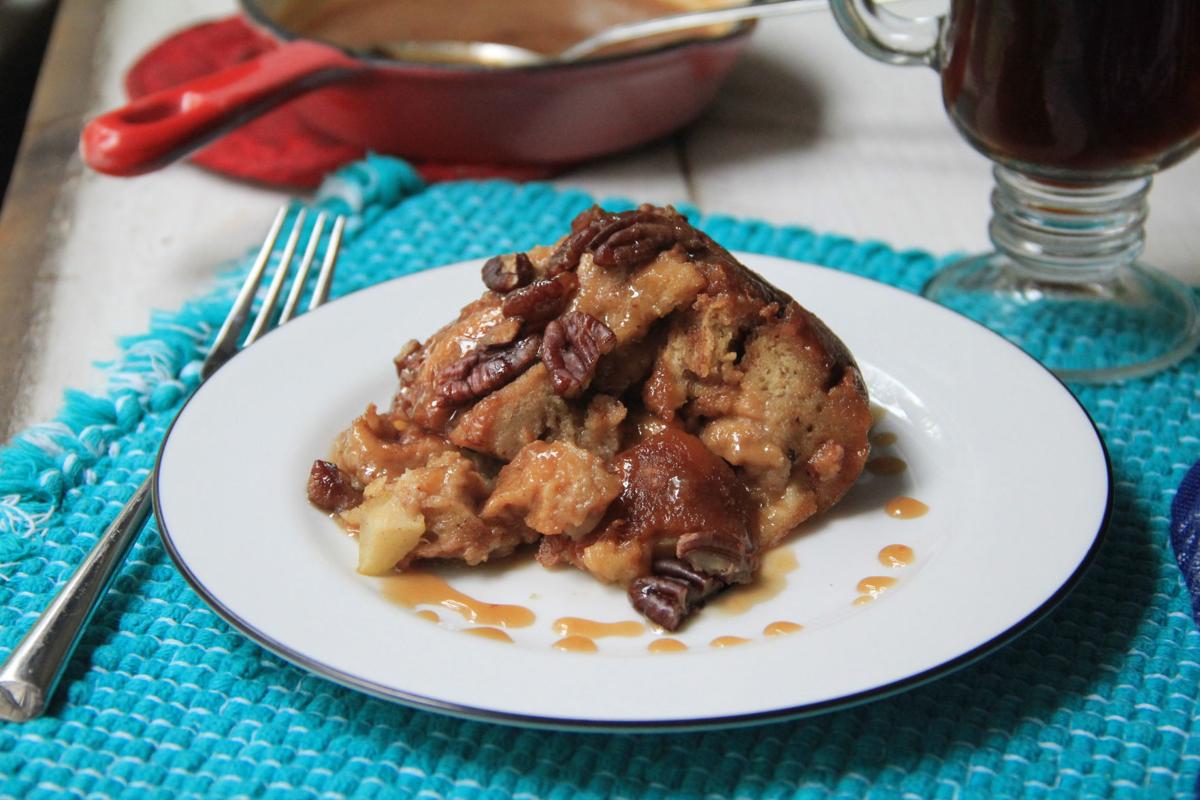 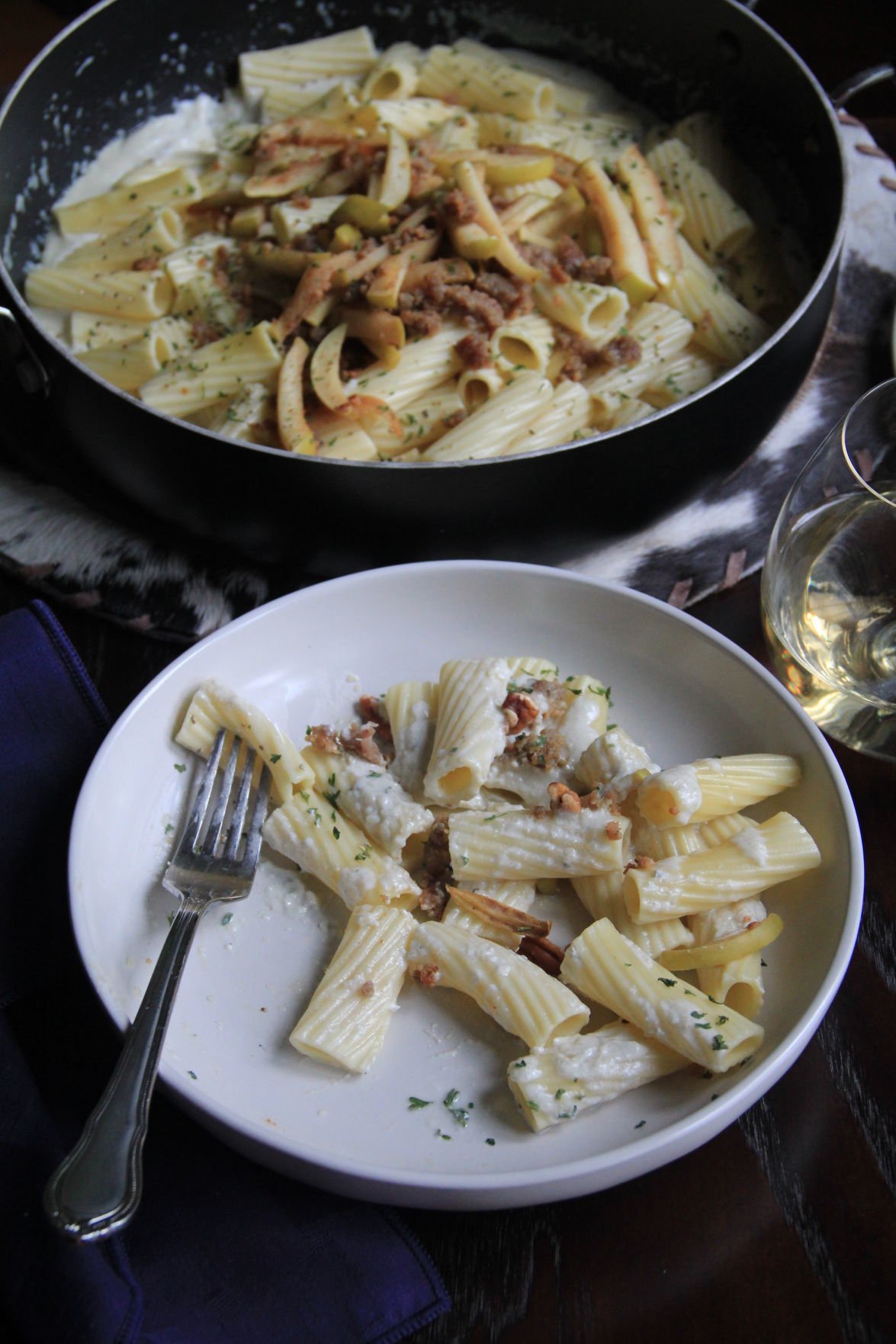 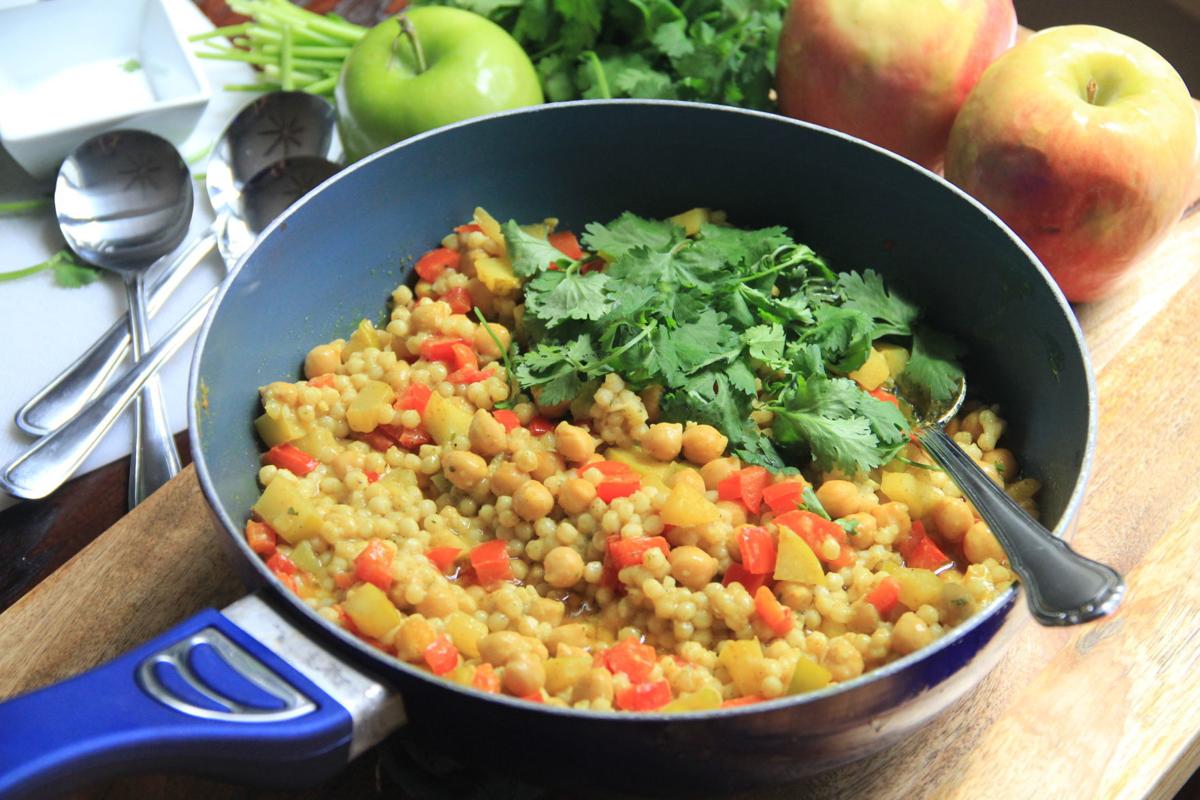 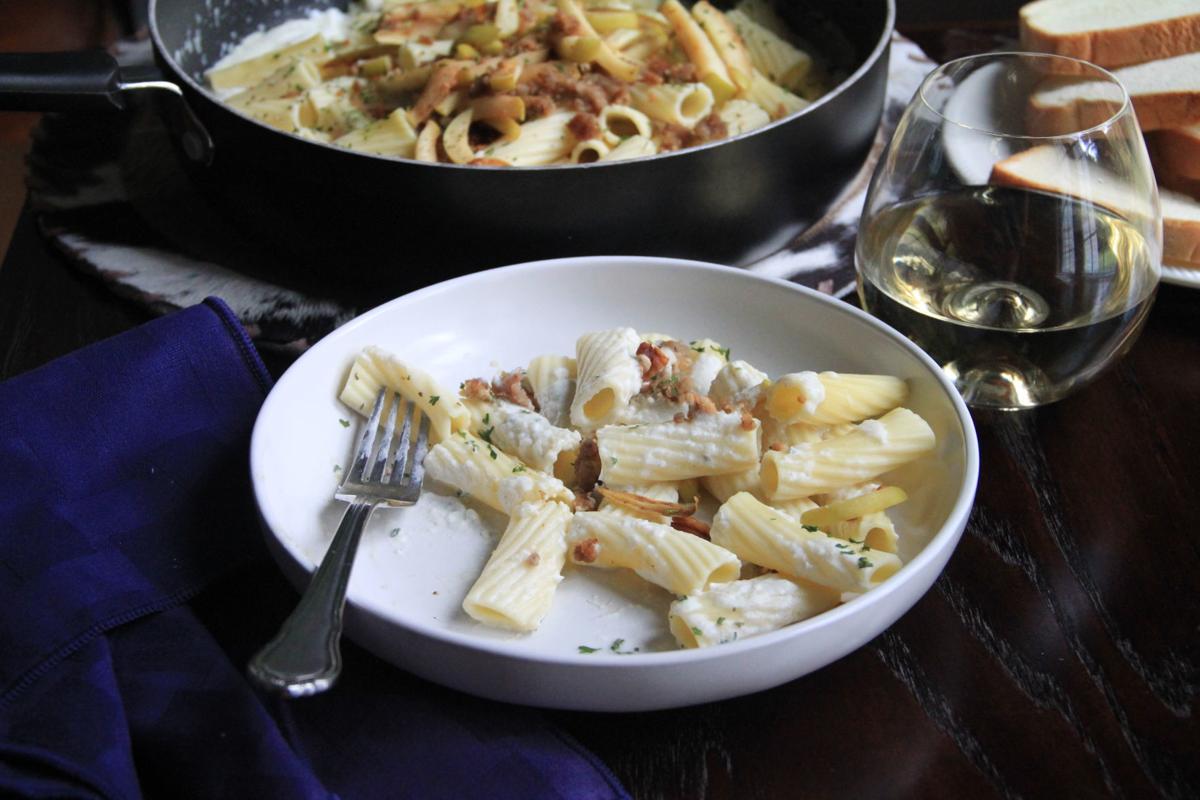 The caramel apple bread pudding gurgling in my slow cooker recently was the first time all summer that I had any interest in the arrival of fall. We had a fulfilling summer, packed with camps, vacations and lazy days. But with the aromas of the apples, cinnamon and vanilla wafting throughout the house, I realized I was suddenly stoked at the thought of lower temperatures, changing seasons and all that comes with it.

The cooler the air, the sweeter the apples — that’s a fact — so here’s to the arrival of autumn.

Apples are around all the time, but fall is true apple season. Pack up the kids and head out somewhere to pick them yourselves — or visit the closest farmers markets for a good selection — and then put apples into both sweet and savory dishes. For every dense, spongy bread pudding dripping with a maple-y glaze and served warm as brunch or dessert, there’s a complementary savory meal where apples shine.

For example, they’ve always paired well with meaty pork, be it chops, sausage or bacon. Or, while you don’t normally think of apples in curry, you should, because they lend a subtle sweetness to rich sauces flavored with curry powder, turmeric and cumin.

That bread pudding, though ...

Bread pudding is one of those dishes that you can’t really mess up. If there’s not a beloved recipe in your family, it’s time to make one. In its basic form, it’s bread pieces soaked in milk or cream, plus eggs, sugar and a little vanilla. Where we can all agree that French toast is a brunch food that is served with a certain structure, bread pudding is the carload of laid-back cousins who seem to wing it through life and usually show up just for the party.

I used cream and half-and-half, but others might use one or the other, or go entirely with milk. (For best results, I wouldn’t recommend using skim or even 2% milk — go with whole, at least.) I added cinnamon and cloves and drizzled jarred caramel sauce throughout and on top along with chopped pecans. It was chock-full of apples: Granny Smith and Gala.

But you could add raisins, butterscotch, toffee or chocolate chips, caramel candies, an assortment of nuts, Nutella, and other fruit or no fruit — so many variations. I made it in my slow cooker, which was a first, and it probably will be my go-to method from now on. There was no soaking the bread overnight — or even 30 minutes. Most recipes call for day-old, slightly stale bread, usually something like French bread or challah, but I went with a loaf of Pepperidge Farm Sweet Hawaiian sliced sandwich bread.

Just mix it up, put it in the slow cooker and then go on with your life for several hours. Spongy and moist on the inside, with a top that is chewy and lightly browned, it’s best served in big, messy chunks and then topped with a sweet maple glaze.

But let’s think about dinner, too, shall we?

Busy weeknights don’t need to be further complicated by fussy meals. Pasta is easy, but it doesn’t have to be boring. Sautéed apples and crumbled sausage make a tasty combination, but they get even better when nestled in a thick sauce made with nothing more than heavy cream, Gorgonzola and pecorino Romano.

There’s a lot going on here, but it works. Sweet apples, savory sausage and crunchy pecans meet the intense pungency of blue cheese — all the elements of a good cheese board, but made for pasta. The combo of the two cheeses means the sauce isn’t too overpowering, but it’s definitely led by the Gorgonzola. You could use walnuts instead of pecans, and any pasta shape will do.

It comes together in about 20 minutes, yet it’s complex and fancy enough to prepare for company.

Speaking of complex flavors, it never occurred to me that apples would make a good addition to curry. But I now have a new meatless meal that’ll be perfect for chilly fall nights.

This curry with red peppers, garlic and chickpeas also uses one of my favorite pantry staples — coconut cream — plus lots of curry powder, turmeric and cumin. (Be sure to get coconut cream, usually found in the international foods aisle, and not cream of coconut. The latter is widely used as a mixer for sugary cocktails.)

While packed with flavor from the spices and hints of coconut, the apples don’t get lost. I went with chewy pearled couscous as a base instead of the usual rice and topped it with lots of freshly cracked black pepper and cilantro. This is a cheap meal that tastes way more flavorful than its kitchen-staple ingredient list, and it’s comfort in a bowl.

That is all we really want when the temperatures drop, right? Well, that, and crisp apples both sweet and tart. Good thing the two go hand in hand.

This is perfect for those chilly fall nights when you want something quick and satisfying and packed with flavor. This is a mild curry - feel free to spice things up per your tastes.

1 large Granny Smith apple (you can peel or not), chopped small

1  15-ounce can coconut cream (not cream of coconut)

Salt and pepper to taste

Couscous or rice, for serving

In a large skillet, heat 2 tablespoons olive oil over medium heat. Add apples, garlic and red pepper, and sauté until the apple and pepper are soft but not mushy, about 2 to 3 minutes.

Push mixture to the side and add remaining 1 tablespoon oil along with the chickpeas. Sauté about 1 minute, then add coconut cream, curry powder, turmeric and cumin. Turn up heat and bring mixture to a boil, then reduce heat and let simmer for about 10 minutes. Taste for salt and pepper, and adjust spices as needed.

While it's simmering, make rice or couscous. Serve curry with lots of cilantro.

This will make your whole house smell like fall. It's not very sweet, but the added glaze sends it over the top. Feel free to add raisins or other nuts, or even cinnamon chips or butterscotch chips. The glaze is good, but whipped cream or vanilla ice cream would be perfect, too.

Cut bread and set aside. In a large mixing bowl, beat eggs with brown sugar, cinnamon and cloves. Add cream, half-and-half and vanilla. Gently fold in the bread pieces, making sure to stir and cover equally with the egg mixture. Gently fold in apples.

Pour half of the mixture into the slow cooker and press down. Drizzle half of the caramel sauce over the middle of the pudding (if it gets along the edges, it might burn). Add remaining pudding mixture and press down slightly to condense. Drizzle remaining caramel over the top, and sprinkle on pecans.

Glaze: Just before the pudding is done, in a small saucepan, whisk brown sugar, cream, butter and maple syrup until smooth over medium-low heat. Pour over bread pudding before serving.

Pasta with Gorgonzola, Apples and Sausage

Apples and sausage have always been a good sweet-and-savory match, but tangy Gorgonzola in a rich cream sauce further complements both flavor profiles.

1 pound mild sausage (or hot if you prefer)

Boil a large pot of water and cook pasta according to directions.

In a large skillet, crumble sausage and cook over high heat until no longer pink. Remove sausage and let drain in a paper towel-lined bowl, and wipe out all but about 1 tablespoon fat from the skillet. Reduce heat to medium and add chopped apples and sauté until softened, about 2 minutes. Pour apples into bowl with sausage.

Back in the skillet, pour in half-and-half and lower heat to medium-low. Add Gorgonzola in chunks, and stir gently until the chunks are melted and the sauce is smooth. Add pecorino Romano and stir until smooth.

Drain the pasta and add to the skillet with the sauce. Add sausage and apples and taste for salt and pepper. Sprinkle on pecans and serve with parsley for garnish.