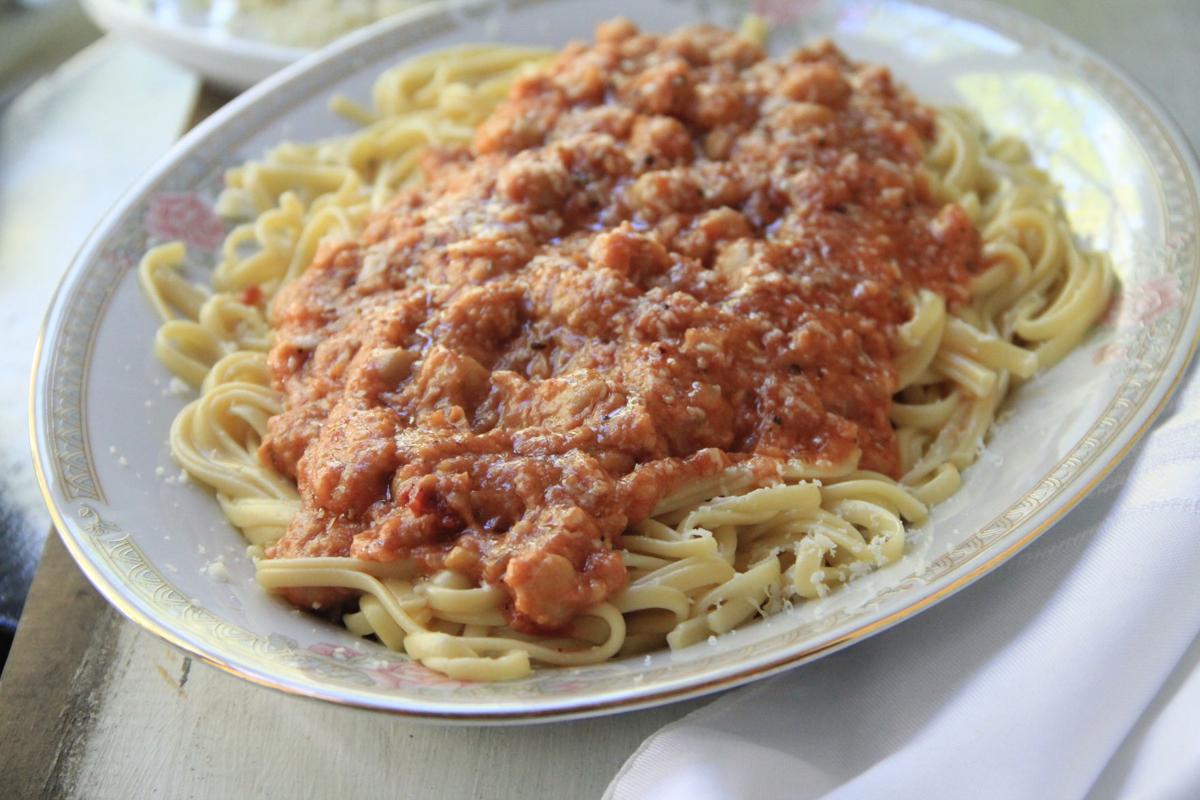 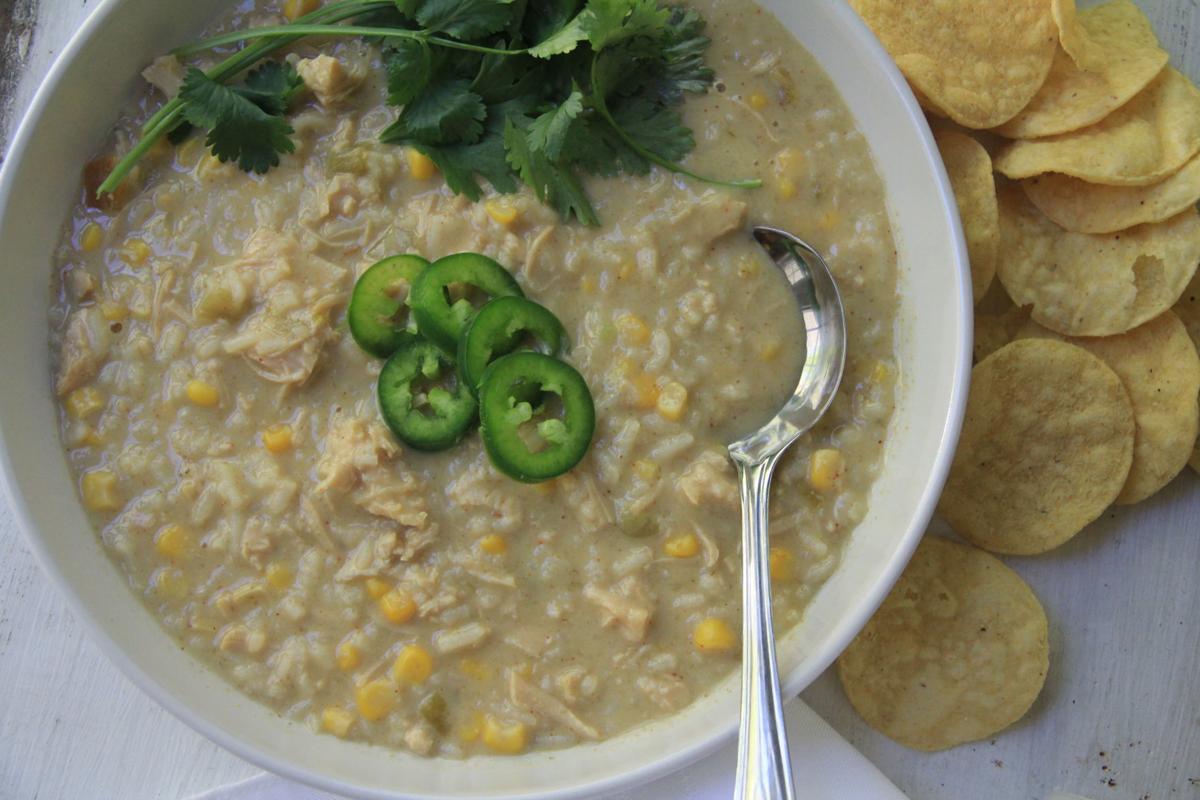 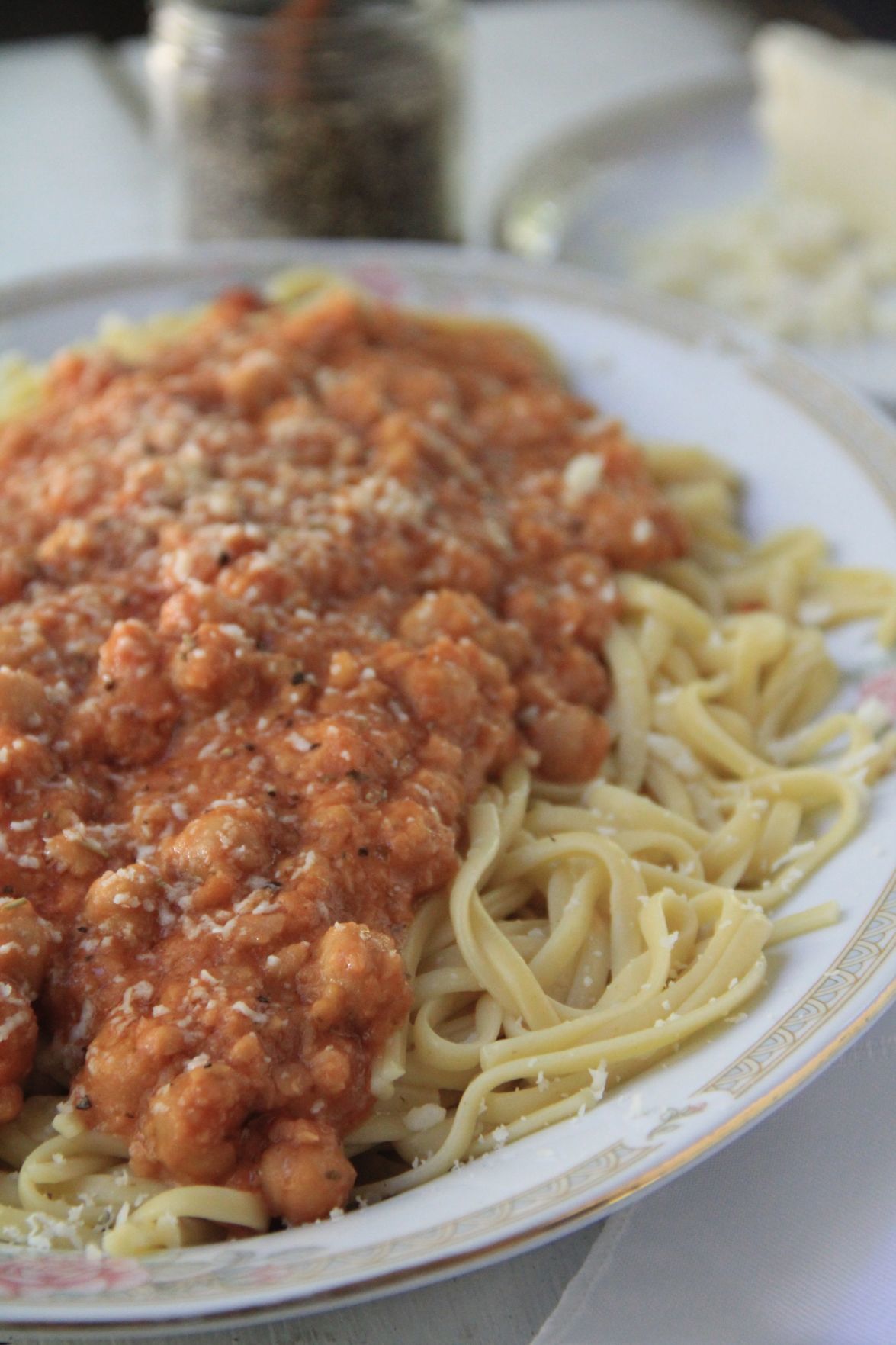 The ingredients in Chickpea Pasta Sauce individually might not wow you, but mix them together, and they’ll make your taste buds sing. 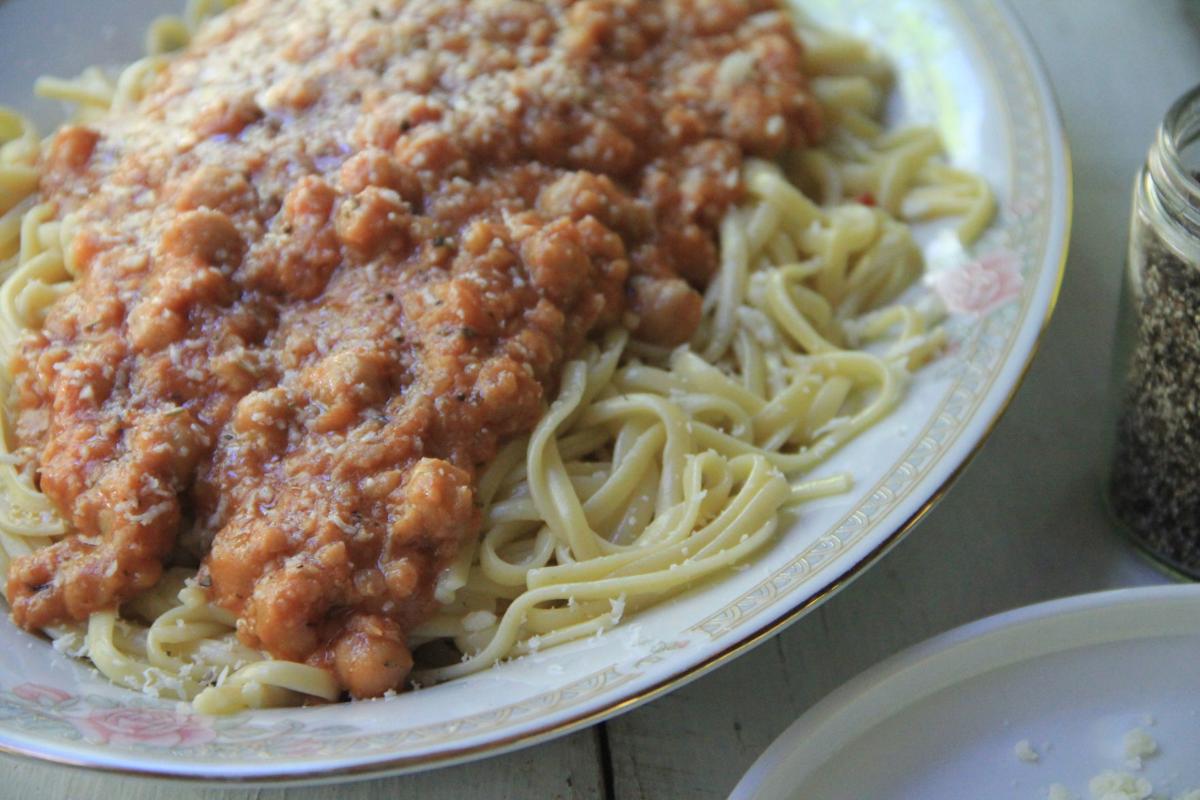 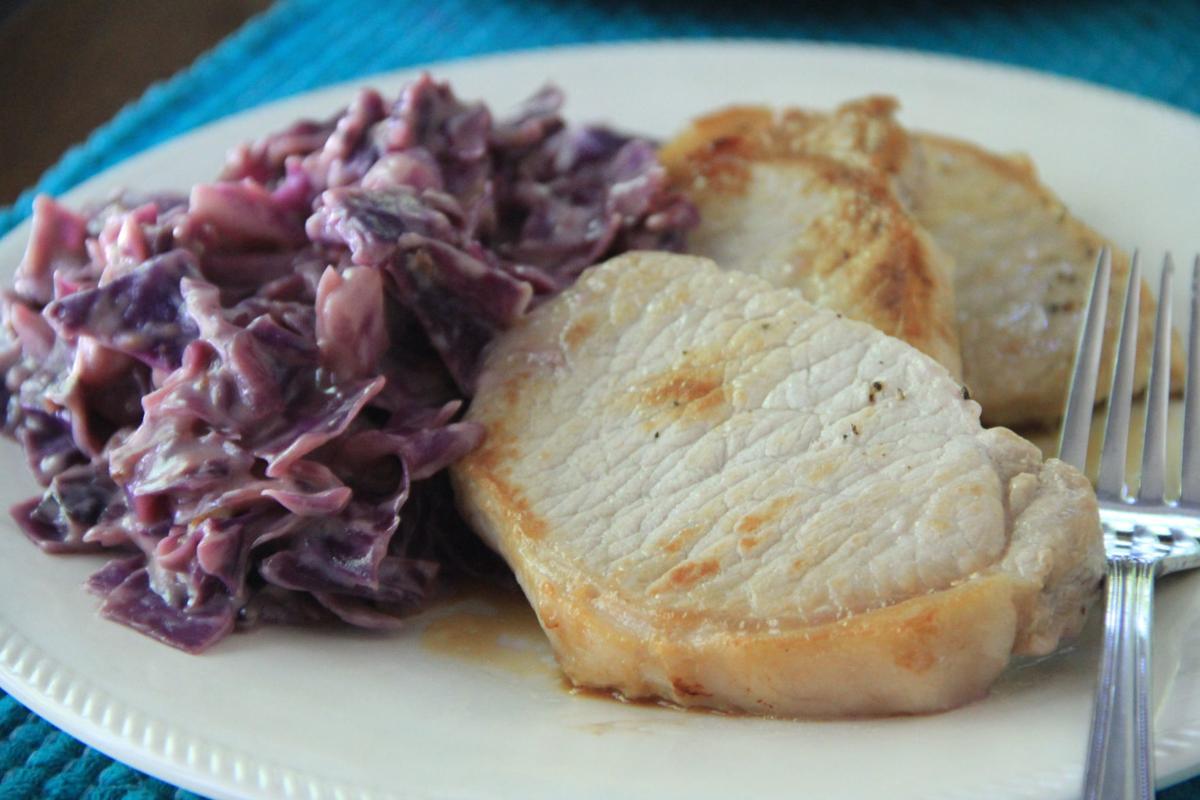 Pork chops and cabbage are the centerpiece of an inexpensive meal that also features onions and cream of mushroom soup. 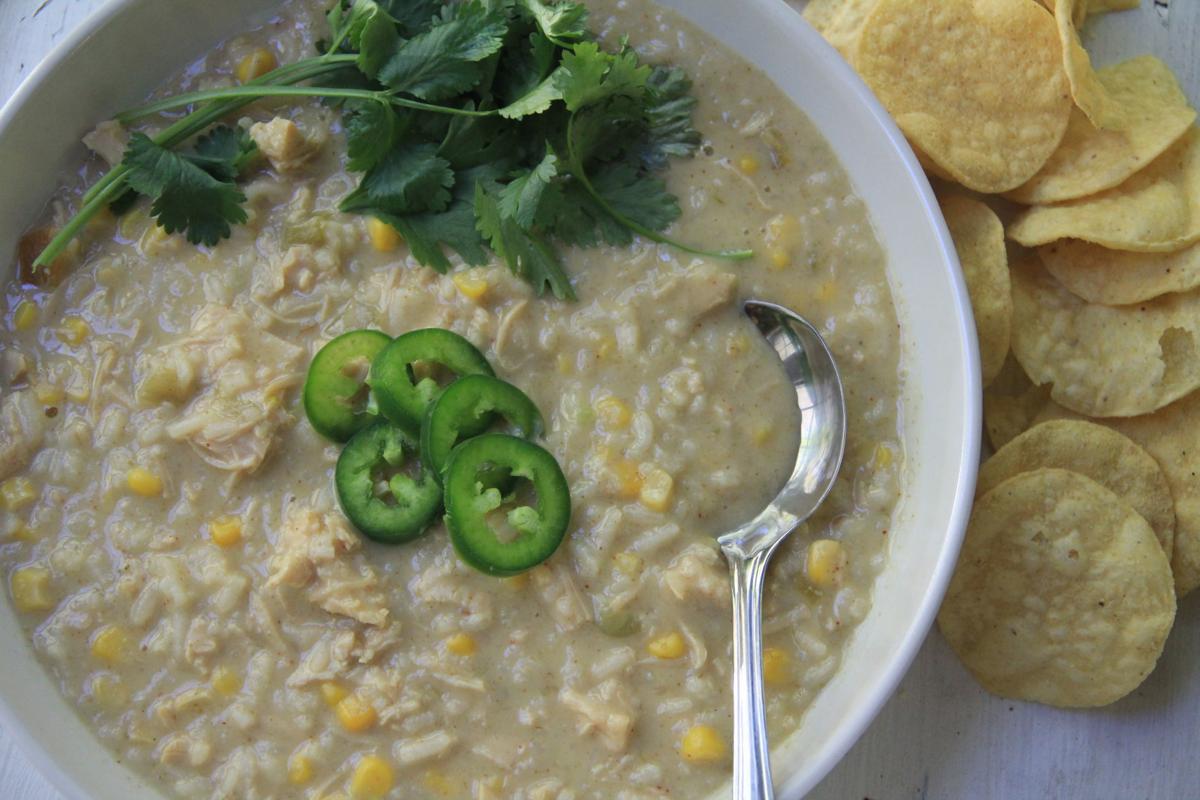 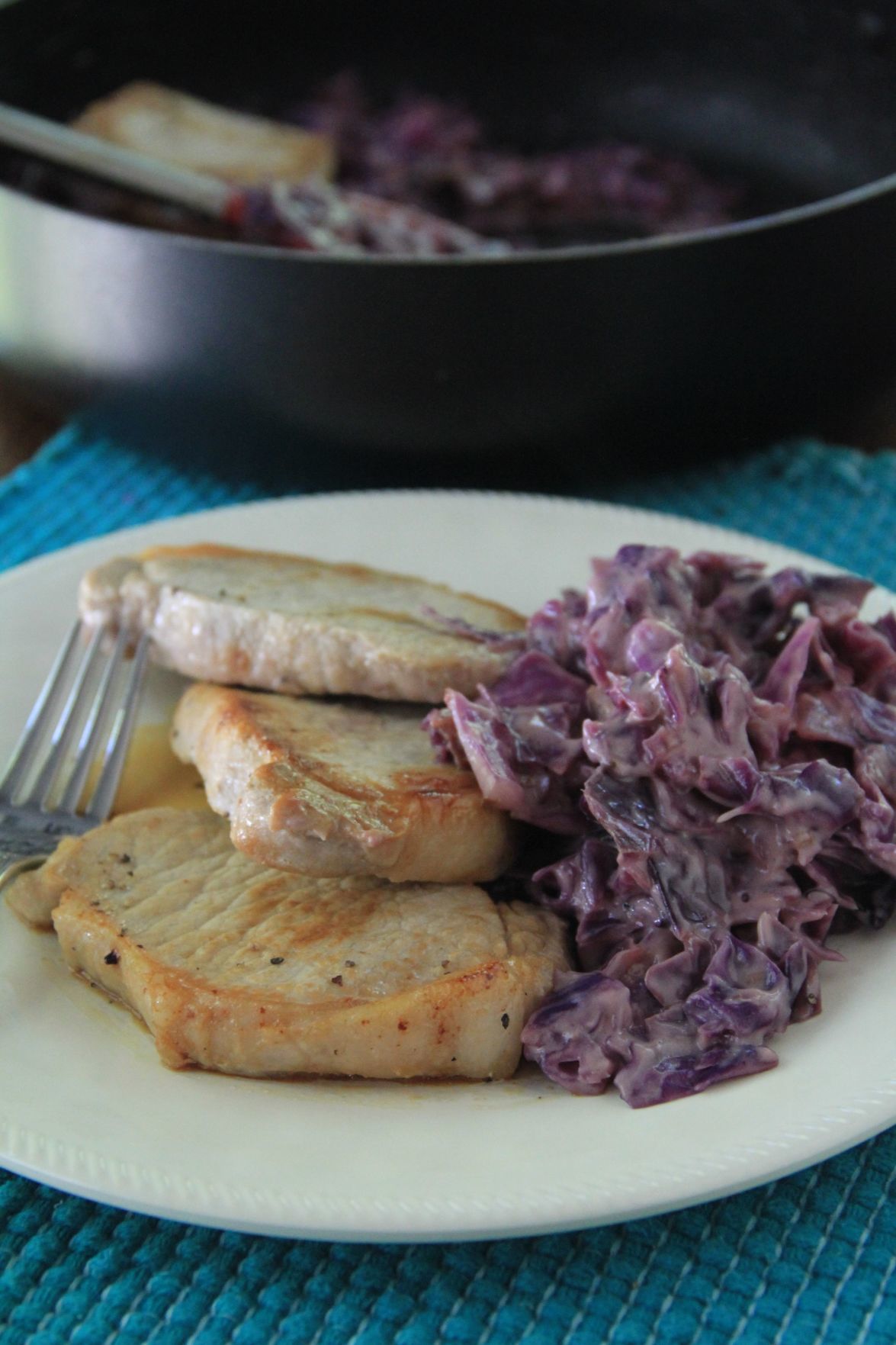 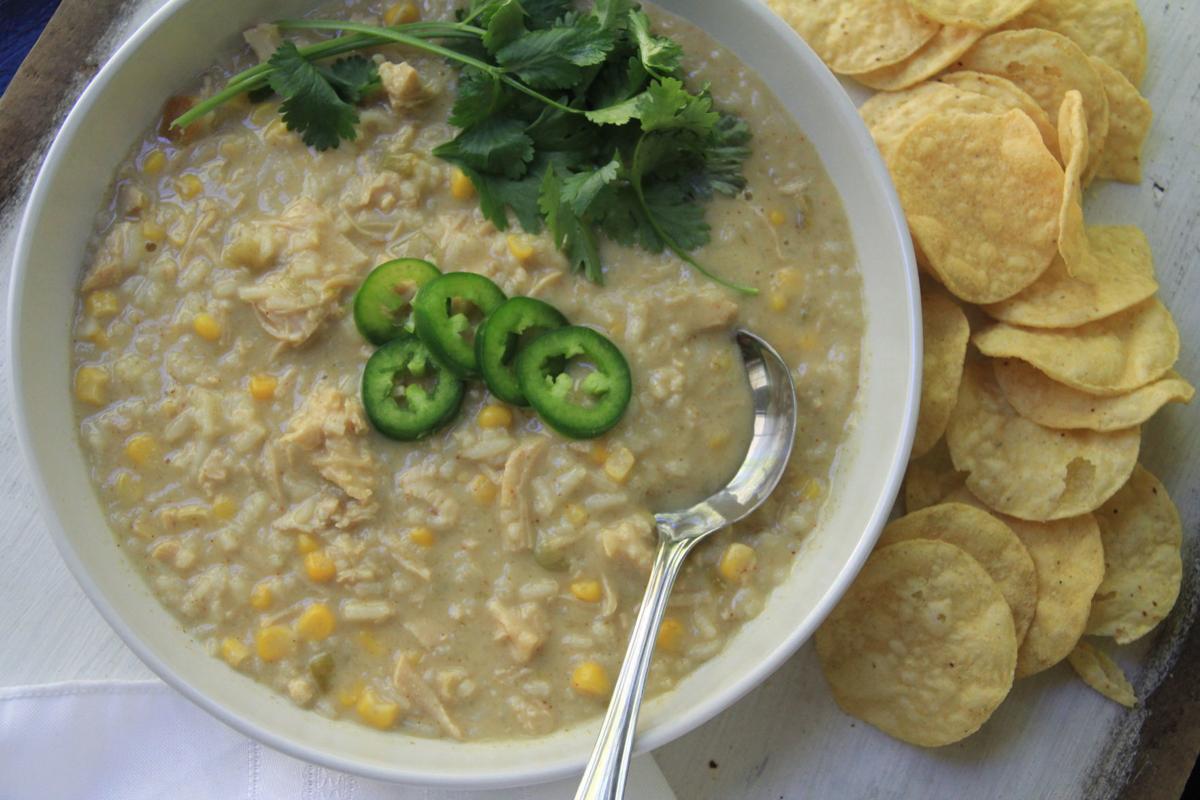 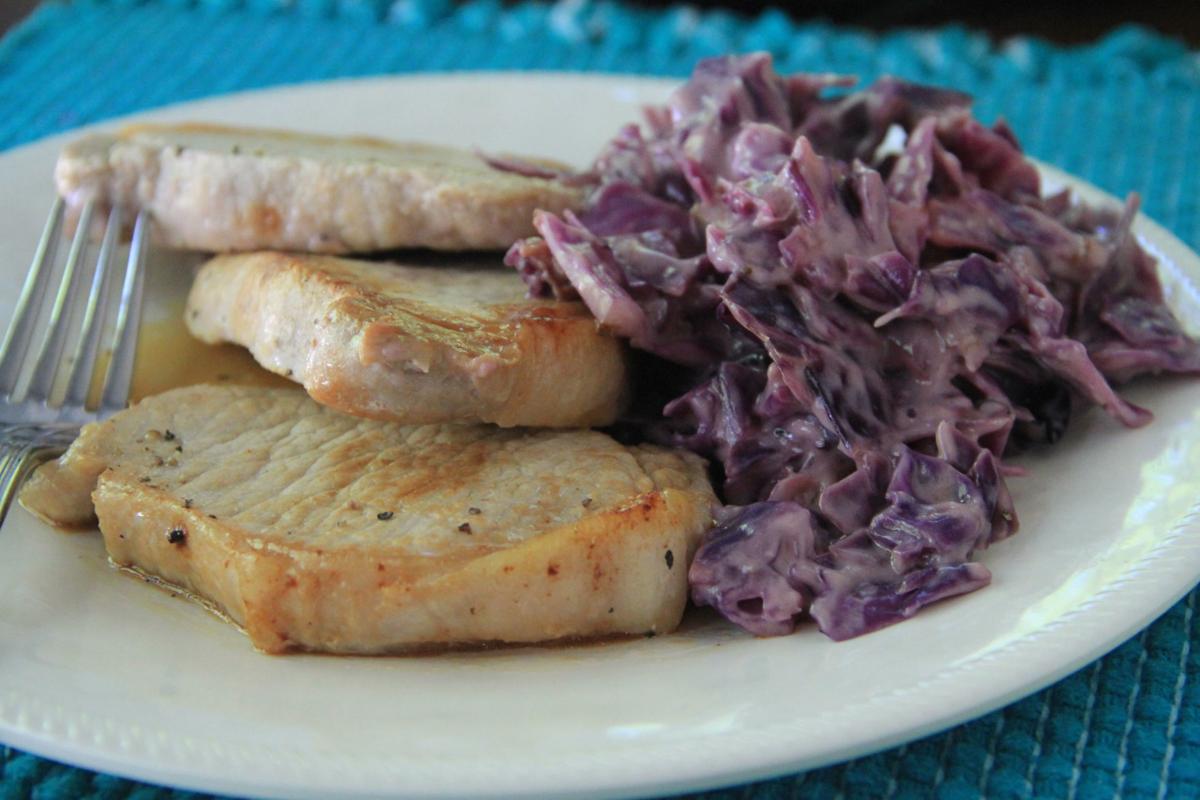 The ingredients in Chickpea Pasta Sauce individually might not wow you, but mix them together, and they’ll make your taste buds sing.

Pork chops and cabbage are the centerpiece of an inexpensive meal that also features onions and cream of mushroom soup.

Julie Smart Koob isn’t the only one cooking more often these days, and if you want to know what she’s eating on a regular basis, she’s happy to share. In fact, when COVID-19 began keeping everyone home, she threw proper spelling to the wind in favor of alliteration so she could share her “CitchenCoronaChronicles” on Facebook with anyone who needed some inspiration in the kitchen.

I’m glad she did, because she had a recipe for green chile enchilada soup — otherwise known as Meal 10 in her chronicles — that called to me the instant I saw it.

I can overlook misspelled words when there’s food involved.

This week we’re sharing another round of reader-submitted recipes, because our community is a giving one.

In case you missed it, last week we featured chicken spaghetti, a recipe that makes enough to feed a small army; flavorful black bean burgers; and a potato soup that my daughter declared the best soup she’s ever had.

This week’s batch of recipes is just as good and just as varied. There’s Koob’s enchilada soup, filled with spices, chicken and rice, plus an easy pork chop and cabbage recipe and pasta with a “sauce” made from chickpeas.

First up, the soup. Koob mentioned her chronicles when she wrote to me, which immediately sent me to Facebook to see what she was cooking. The enchilada soup caught my eye because it’s a slow cooker recipe. If you think slow cookers are only handy during cold weather months, you’re missing out. I use mine year-round for roasts, soups, barbecued chicken and more.

In fact, it’s especially useful now that I’m working from home. No matter how many times I walk through my kitchen on a daily basis now — a lot, it seems — thoughts about dinner still don’t really take shape until late in the afternoon, when the workday is over. I’m sure many of you can relate. Anything that saves time is much appreciated.

The enchilada sauce and the green chiles add some heat, but that’s cut by the smooth cream cheese. You can always crank up the spice by adding jalapeños to the soup or as garnish. In my house, thick soups are preferred over thin, brothy ones, so I added the optional cornstarch to the slow cooker before everything was done. Topped with a mountain of Monterey Jack cheese, lots of cilantro and crushed tortilla chips, this one is a true winner.

Glenwood Burley’s recipe for pork chops and cabbage included a “jigger” of this and a “pop” of that — and those are the sorts of unfussy recipes I love.

His “Burley Hollow Dinner” uses inexpensive pork chops and even more inexpensive cabbage along with a few staples, such as oil, butter and sugar, and canned cream sauce.

I think cabbage is one of the most underrated vegetables out there. I happened to have red cabbage, so rather than make an unnecessary trip to the grocery store, it’s what I used. Cabbage and onions cook quickly, and in this recipe, once they’re done, they get transferred to another vessel, and then the pork chops and more onions go into the same skillet.

Burley recommended a cast-iron skillet — which I also love and agree with — but a regular skillet is fine. He didn’t specify what sort of chops, so I went with boneless because they’re the leanest. The “pop” he mentioned comes from white wine, but chicken broth could be subbed. I don’t think canned cream sauce is needed — call me a cabbage purist — but it does add a sauce-y element to the dish.

Betsy Tompkins completely undersold the Chickpea Pasta Sauce she sent me. She mentioned that it doesn’t have a lot of “eye appeal,” and that when she made it recently, her husband took one look at her ingredients and was skeptical the meal would turn out anything but boring.

To that, I’d say this: I would gladly eat ugly food every day of the week if this is what ugly food tastes like.

She’s right, in part. The ingredients are mostly pantry staples, such as chickpeas, olive oil and butter, tomato paste and herbs. Seemingly not a lot of wow factor there. Put them all together, however, and somewhere, angels starting singing the moment I took a bite.

Tompkins offered some advice along with the recipe: “ ‘Don’t be afraid to try something that seems a little funky — this is a good example of that spirit,’ ” she wrote to me, adding that when her husband tasted the final product, he said, “I cannot believe how this came together.”

I used linguine, and I’m glad I did because the sauce clung perfectly to those thick strands. My only gripe was that I didn’t make enough sauce. Next time I’ll double the recipe if I’m feeding my family, but as is, the amount will feed two sauce-happy people nicely.

Each of these comfort meals tastes great and, just as important, they’re easy on the wallet — jiggers, pops and all.

— Betsy Thompkins, adapted from “All the Best Pasta Sauces” by Joie Warner

12 ounces spaghetti or linguini (or your favorite pasta)

Cook pasta according to package instructions, drain and set aside.

Meanwhile, in a large skillet, melt butter with oil over medium heat. Add onion, garlic and rosemary, and cook until onion is soft, about 3 minutes. Add chickpeas, tomato paste, salt and pepper, and let simmer for 10 minutes.

Remove 1 cup of the chickpea mixture and puree, then return to skillet and stir to incorporate until heated through.

Take off heat. Toss with hot pasta and serve immediately

— Betsy Thompkins, adapted from "All the Best Pasta Sauces" by Joie Warner

This one can be made in the slow cooker for an easy dinner. Adjust spices and heat to your preferences.

Salt and pepper, to taste (you may need more salt if using low-sodium broth)

In the bowl of a slow cooker, add broth, chicken, enchilada sauce, chiles, water, cumin, chili powder, onion powder and garlic powder. Set on high for four hours, or on low for 6 to 8 hours. About a half-hour before it's done cooking, take out chicken, shred it and add it back to the pot.

Add rice, corn and cream cheese. (It will melt easier if you whisk the soft, cubed cream cheese in 1 cup of the hot soup before adding all of it back into the slow cooker.)

If it's not thick enough, dissolve the cornstarch in water, then add to the pot. Let it simmer an additional 30 minutes.

Serve hot with your favorite garnishes.

Half of 1 head of cabbage, chopped

1 can cream of mushroom soup

In a large cast-iron skillet (or similar), heat 2 tablespoons oil and 1 tablespoon butter over medium-high heat, allowing the butter to brown slightly. Add half the chopped onions and chopped cabbage. Allow to cook down, stirring occasionally, until soft. Sprinkle with sugar and taste for salt and pepper. Transfer cabbage mixture to a large bowl and cover to keep warm.

It’s hard to believe we’re approaching two months of quarantine cooking. Despite the lingering effects of this global pandemic, one of the hig…