From its turquoise-and-orange splashed digs in Scott’s Addition near The Diamond, Tang & Biscuit serves up fork-and-knife biscuit items, sports-bar staples and more, including its Brisket Biscuit, Chicken Caesar Salad and Loaded Tots. 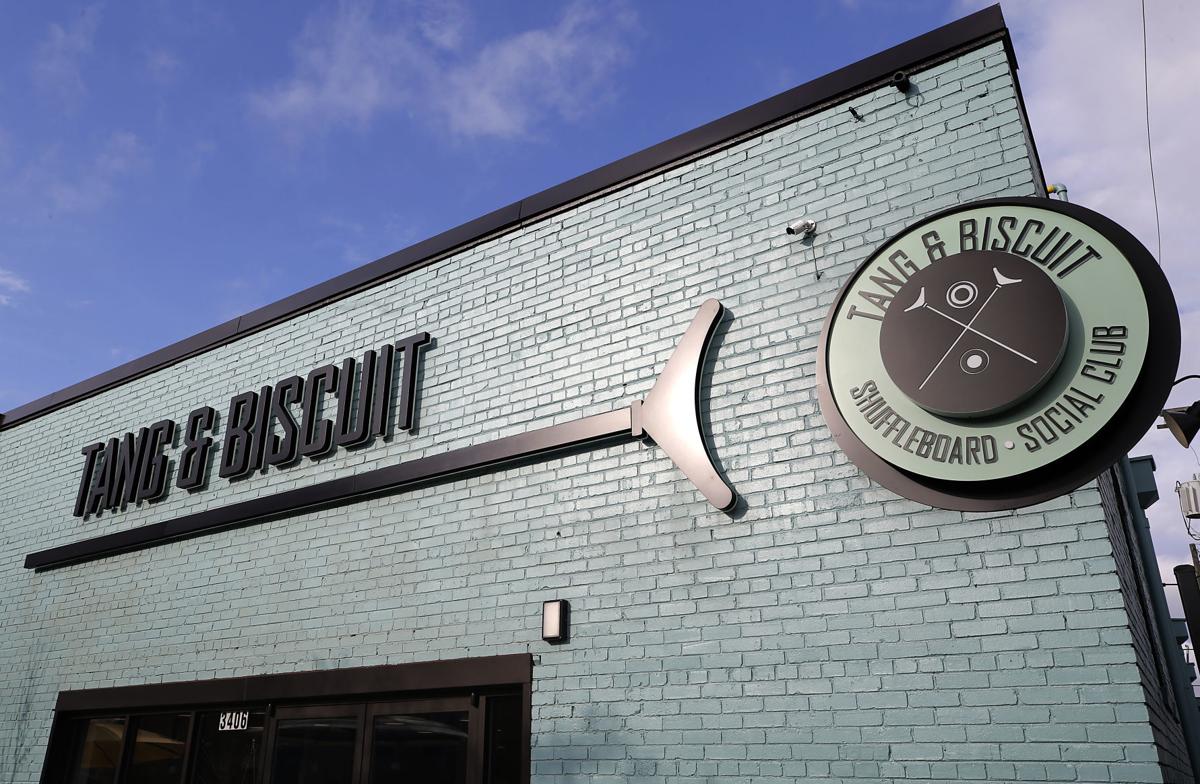 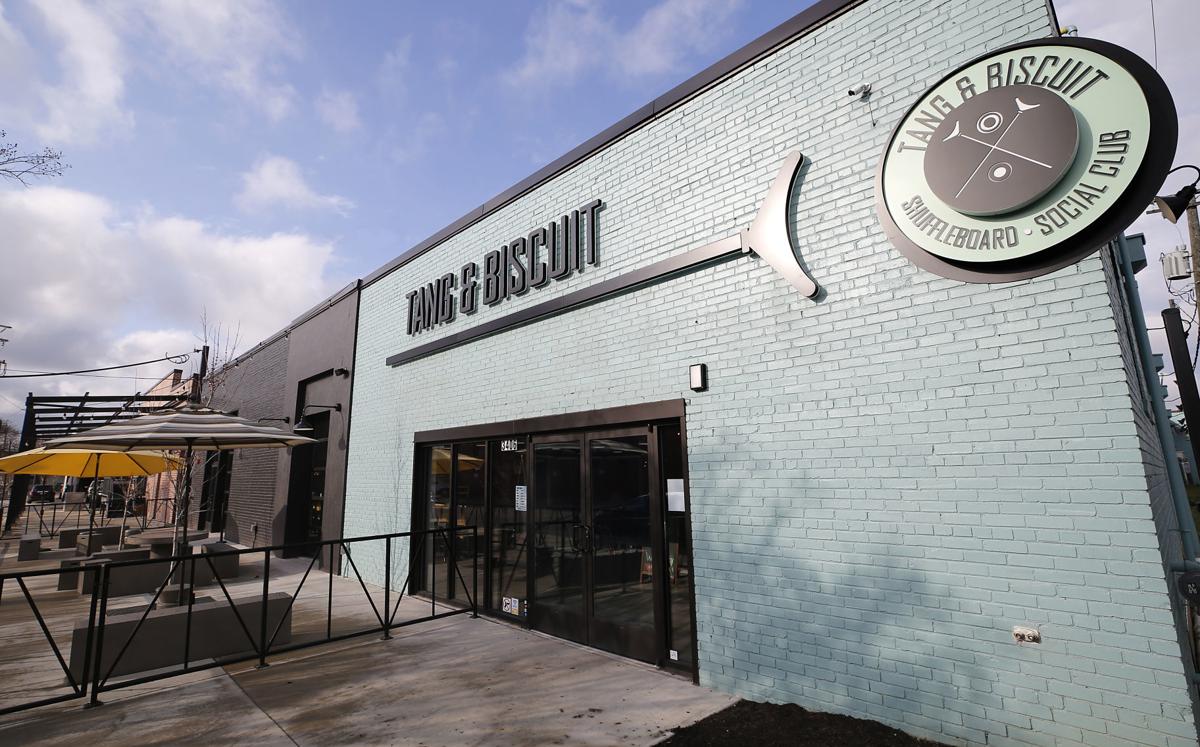 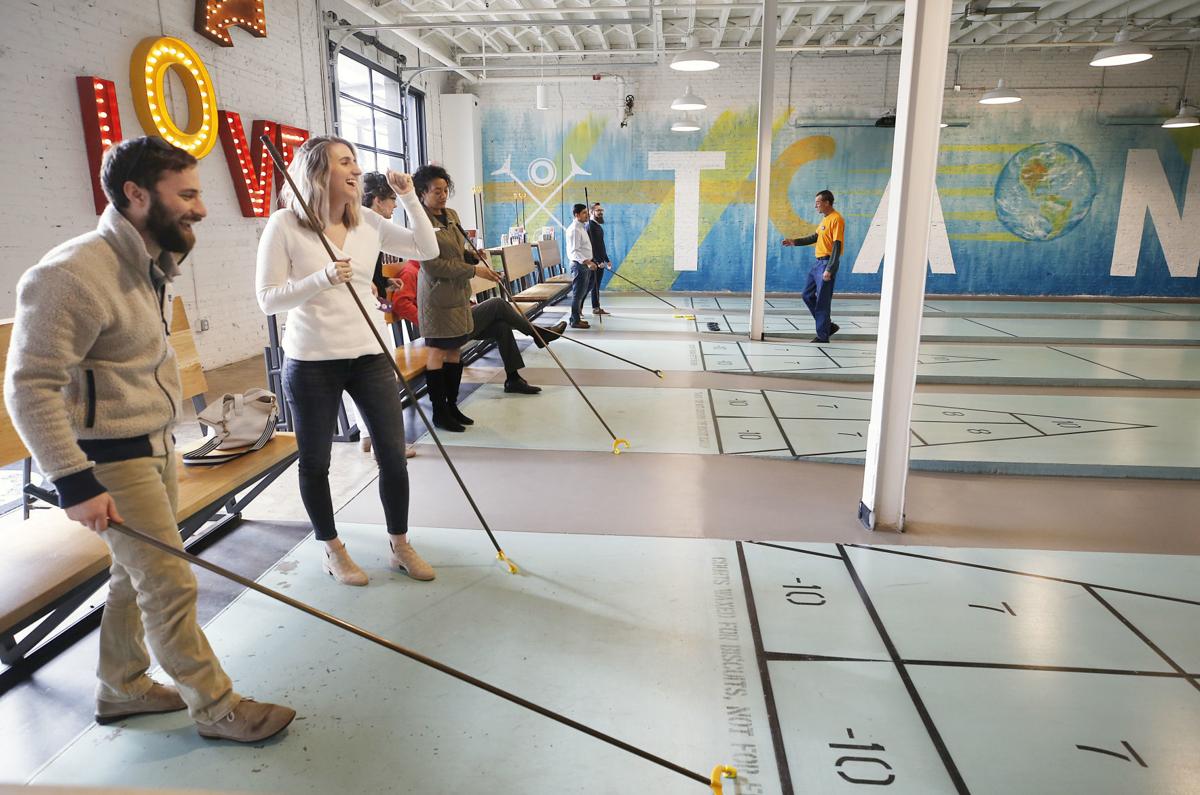 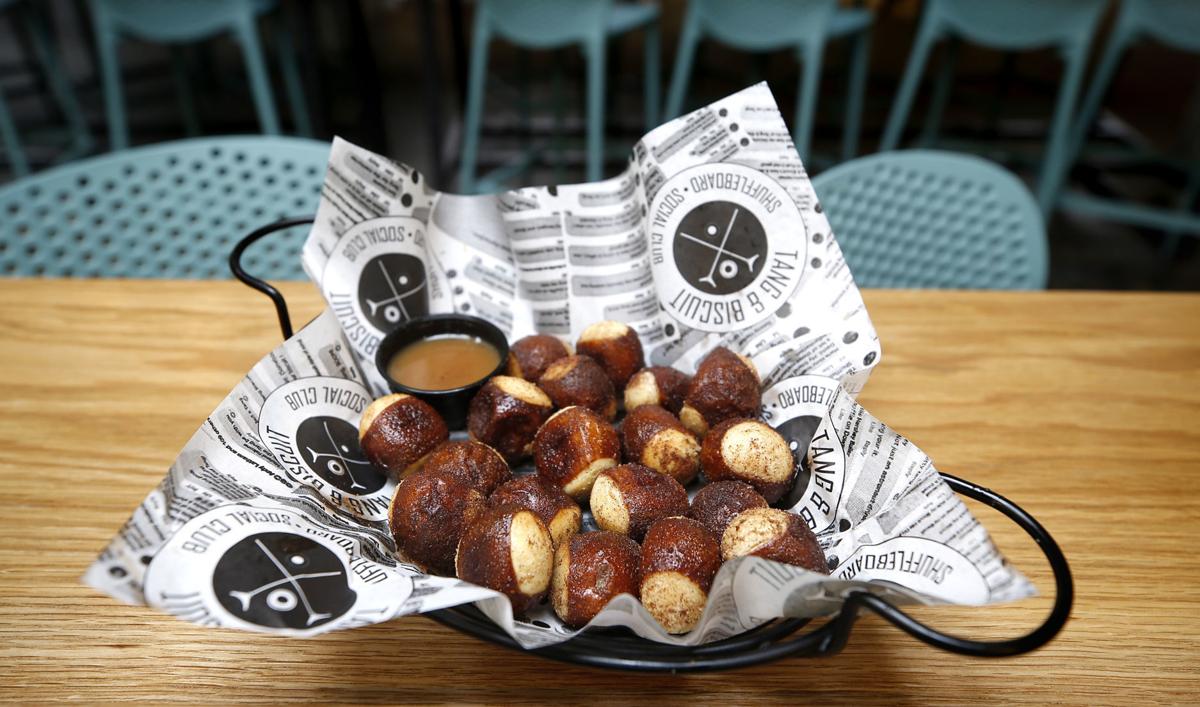 Sweet Balls of Pretzel are on the menu at Tang & Biscuit located in Scott’s Addition at 3406 W Moore Street Monday, March 18, 2019. 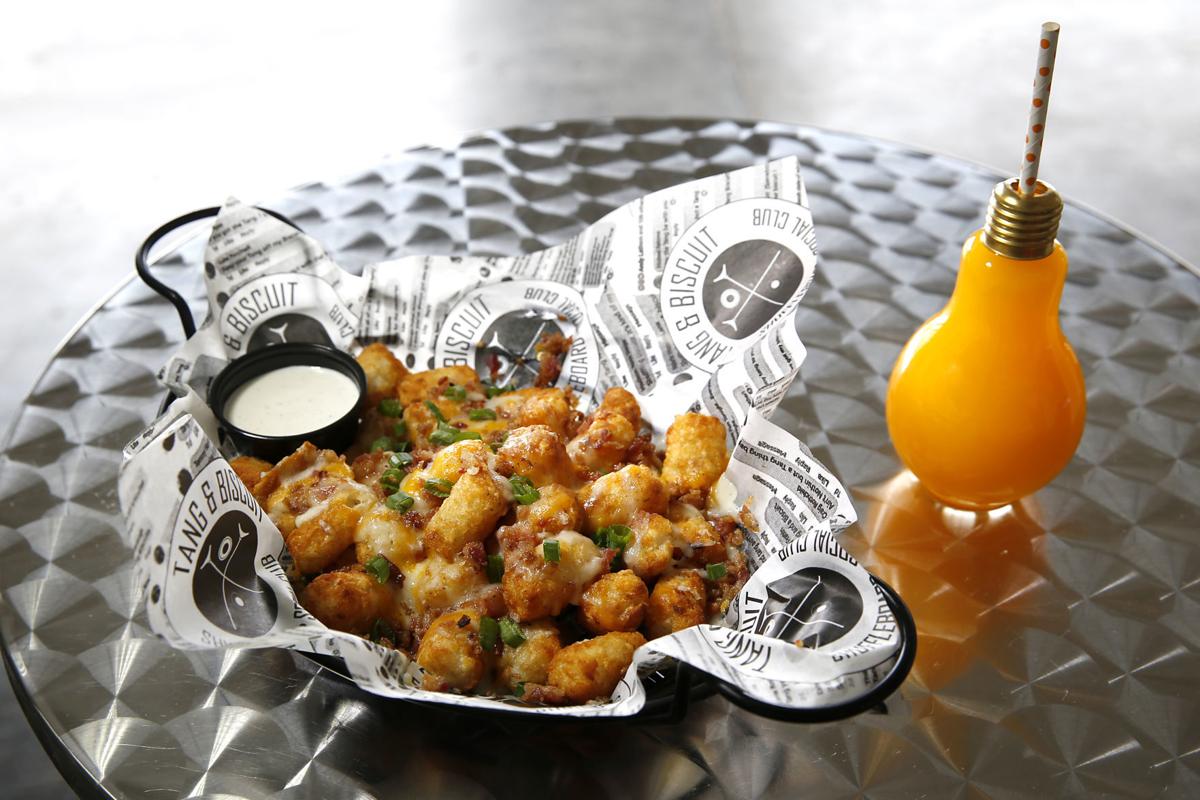 Loaded Tots and an Oranjutang are on the menu at Tang & Biscuit located in Scott’s Addition at 3406 W Moore Street Monday, March 18, 2019. 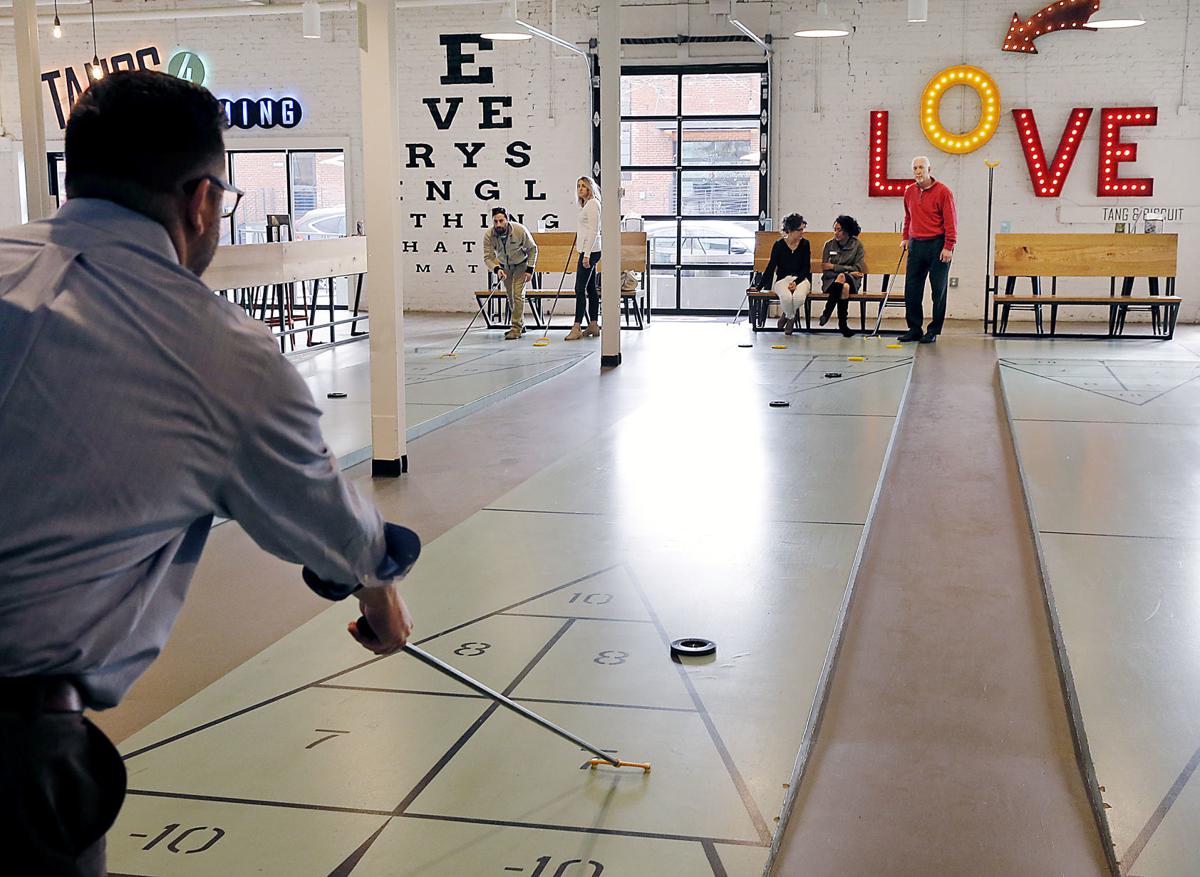 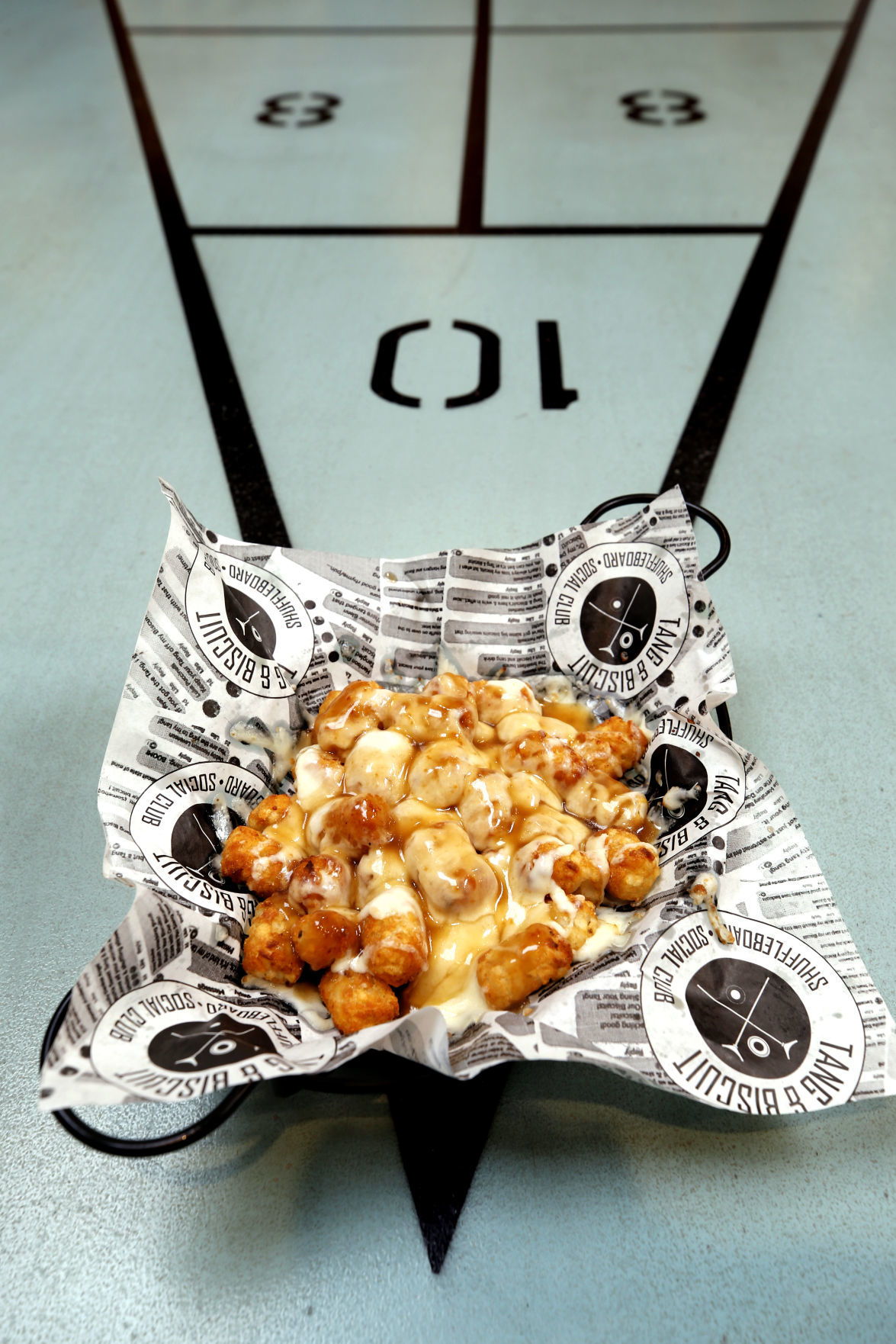 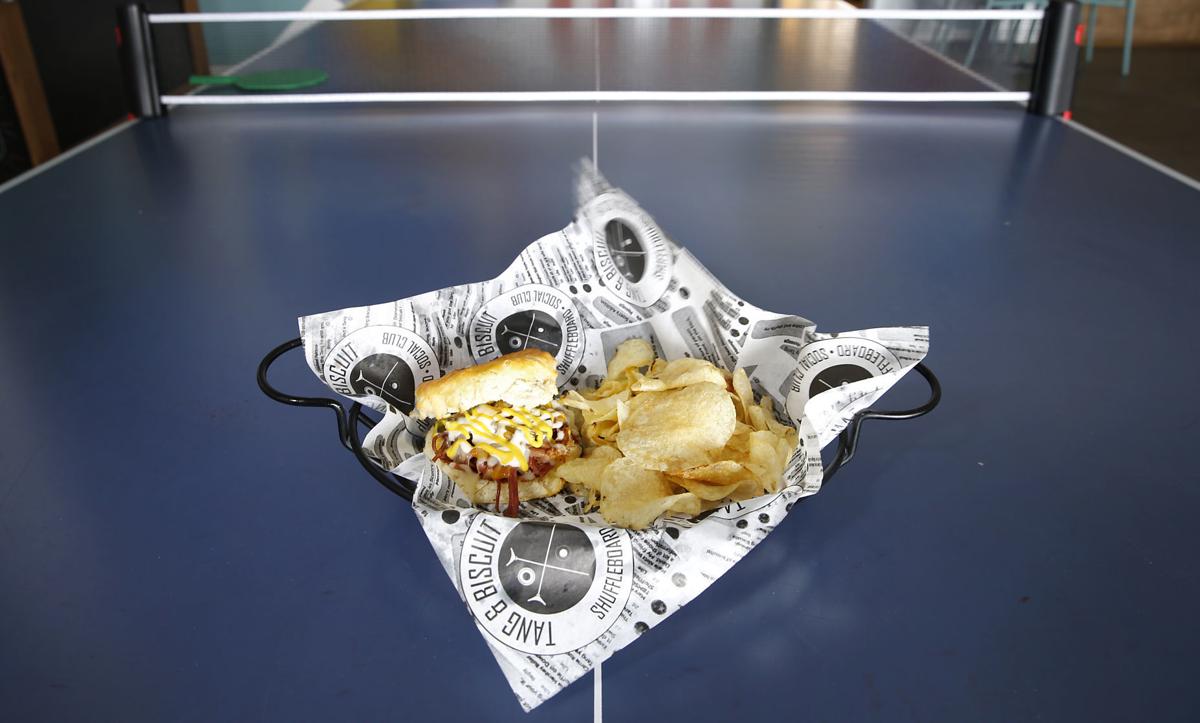 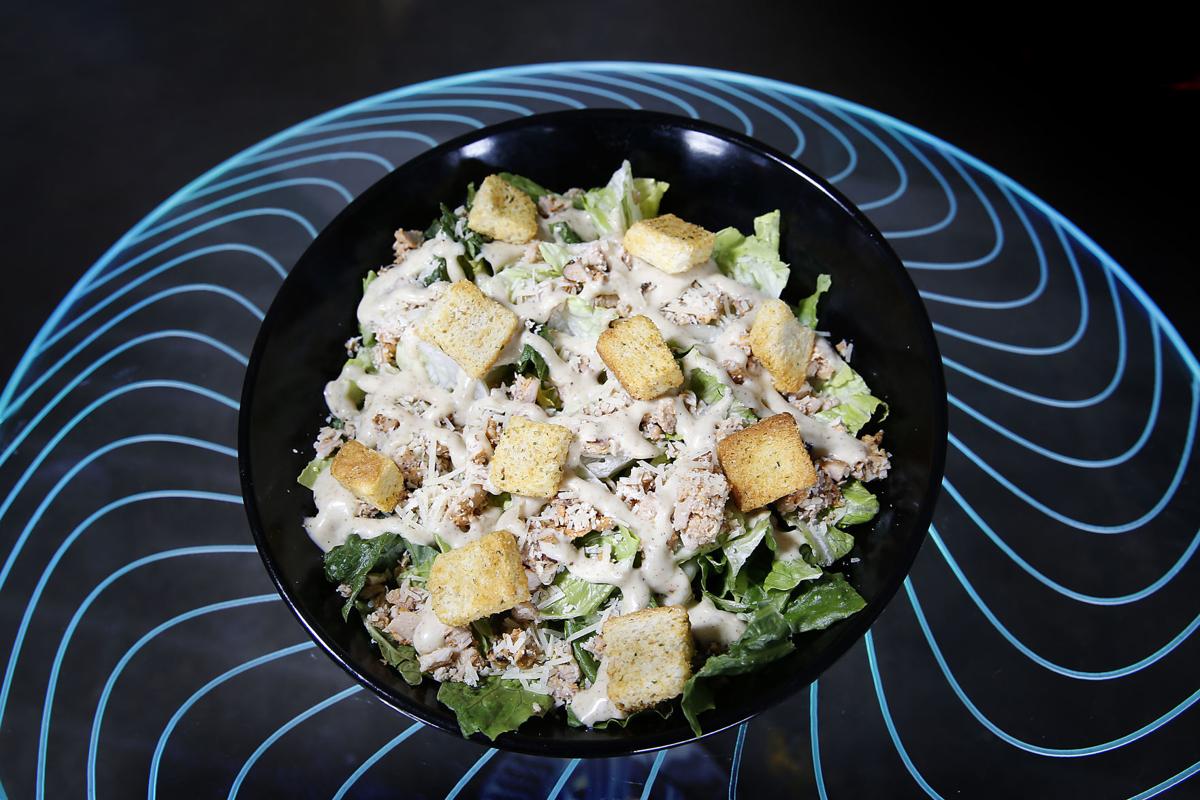 Chicken Caesar Salad is on the menu at Tang & Biscuit located in Scott’s Addition at 3406 W Moore Street Monday, March 18, 2019.

From its turquoise-and-orange splashed digs in Scott’s Addition near The Diamond, Tang & Biscuit serves up fork-and-knife biscuit items, sports-bar staples and more, including its Brisket Biscuit, Chicken Caesar Salad and Loaded Tots.

Sweet Balls of Pretzel are on the menu at Tang & Biscuit located in Scott’s Addition at 3406 W Moore Street Monday, March 18, 2019.

Loaded Tots and an Oranjutang are on the menu at Tang & Biscuit located in Scott’s Addition at 3406 W Moore Street Monday, March 18, 2019.

Chicken Caesar Salad is on the menu at Tang & Biscuit located in Scott’s Addition at 3406 W Moore Street Monday, March 18, 2019.

Do me a favor: Close your eyes and think about shuffleboard, just for a few seconds. “Exciting,” “fun-filled” and “high energy” aren’t the first words that jumped to mind, right? But “exciting” is exactly what Tang & Biscuit Shuffleboard Social Club was going for when it opened last summer. In fact, its motto is, “Making shuffleboard cool since 2018.”

The club sits on Moore Street near The Diamond in Scott’s Addition. On a recent warm Sunday afternoon, its large doors were thrown open, letting the sunshine in while a crowd encompassing all ages — babies to twentysomethings to seniors — played shuffleboard, pingpong and foosball.

What’s the food like at Tang & Biscuit? The online menu starts with the line, “Biscuits, Tots, Pretzels ... Oh my!” So, yes, the menu is biscuit-based and includes sports-bar staples, such as tater tots, flatbreads, chicken wings and a giant pretzel with beer cheese.

The fork-and-knife biscuit choices include the Philly with shredded beef and Cheez, the Chicken Ranch with shredded chicken and ranch dressing, and the Memphis Pig with pulled pork and coleslaw. The Brisket Biscuit ($8.50) topped a biscuit with the playful combination of wonderfully tender beef brisket, jalapeño, mayo and good old yellow mustard.

In the Poutine Tots ($6), crispy tots were covered in a rich brown gravy. The Loaded Tots ($8) — even better — had the sweetness of bacon, the richness of cheddar cheese and the zing of green onions.

In a nice change, the Chicken Caesar ($10) came with shredded chicken rather than chunks. It was drizzled with an enjoyably tart Caesar dressing.

When a delicious-looking flatbread went by my table on the way to another, I made a mental note, guessing that it was the Veggie Flatbread ($8.50). On my next visit, I ordered it. I guessed wrong. While the flatbread I’d seen appeared to be crispy, savory and — well, flat — this version was puffy, resembling pizza, and not wildly flavorful.

In the Sweet Balls of Pretzel ($8), one of two desserts on the menu, small rounds of pretzel dough were fried and then coated in the heavenly combination of sugar and cinnamon. The other dessert? Nightingale Ice Cream Sandwiches ($5), made from scratch locally by a husband-and-wife team of former head chefs. (I’m a fan!)

The bar at Tang & Biscuit is long, stretching for much of one side of the building. Behind it, bartenders are busy serving cocktails — some cheekily incorporating actual Tang — plus canned and draft beer and wine.

Entrepreneurs David Gallagher and David Fratkin opened Tang & Biscuit in August 2018, bringing Gary Marquardt in from Seattle as its chef. They’ve given the place a great name (“tang” refers to the shuffleboard stick and “biscuit” to the puck) and a sense of fun. The exterior is a funky, retro turquoise, as are the barstools and chairs at the dining tables. Servers and other personnel wear turquoise and orange T-shirts with messages such as, “It Takes Two to Tang-o,” “Talk Tangy to Me” and “Nobody Puts Biscuit in a Corner.”

What’s lacking at Tang & Biscuit? The service. A manager explained to me that it’s iPad-based to allow movement and social interaction between employees and customers. In theory, customers should be able to order food and pay their tab with any employee carrying an iPad.

Great idea, but it didn’t translate well on my two visits. On the first, I was told that I could sit at any of the tables, only a few of which were occupied. Ten minutes went by with over a dozen people in Tang & Biscuit T-shirts meandering back and forth in the general area before one walked up and apologized that no server had yet approached me. (She was, by the way, very nice.)

On my second visit, it again took a while before a server wandered up to my table. (He was, by the way, also very nice.) While I appreciate the concept, it all feels a little unorganized.

That complaint aside, Tang & Biscuit is a cool new addition to the city’s dining scene. Its owners hope to expand to up to 12 markets in the next few years. (Admirable ambition!) My advice? Retain the sense of fun and refine the service.

DINING OUT: Tang and Biscuit

Open for: dinner seven nights a week; also lunch on Saturday and brunch on Sunday

Ideal for: Sunday-afternoon beer and shuffleboard

Noise level: average to loud, depending on the time of day

Best seat in the house: one of the dining tables, where you can see all the action

Reservations: no; service is first-come, first-served

Outdoor dining: yes, on the front patio; coming in spring 2019 to the back patio