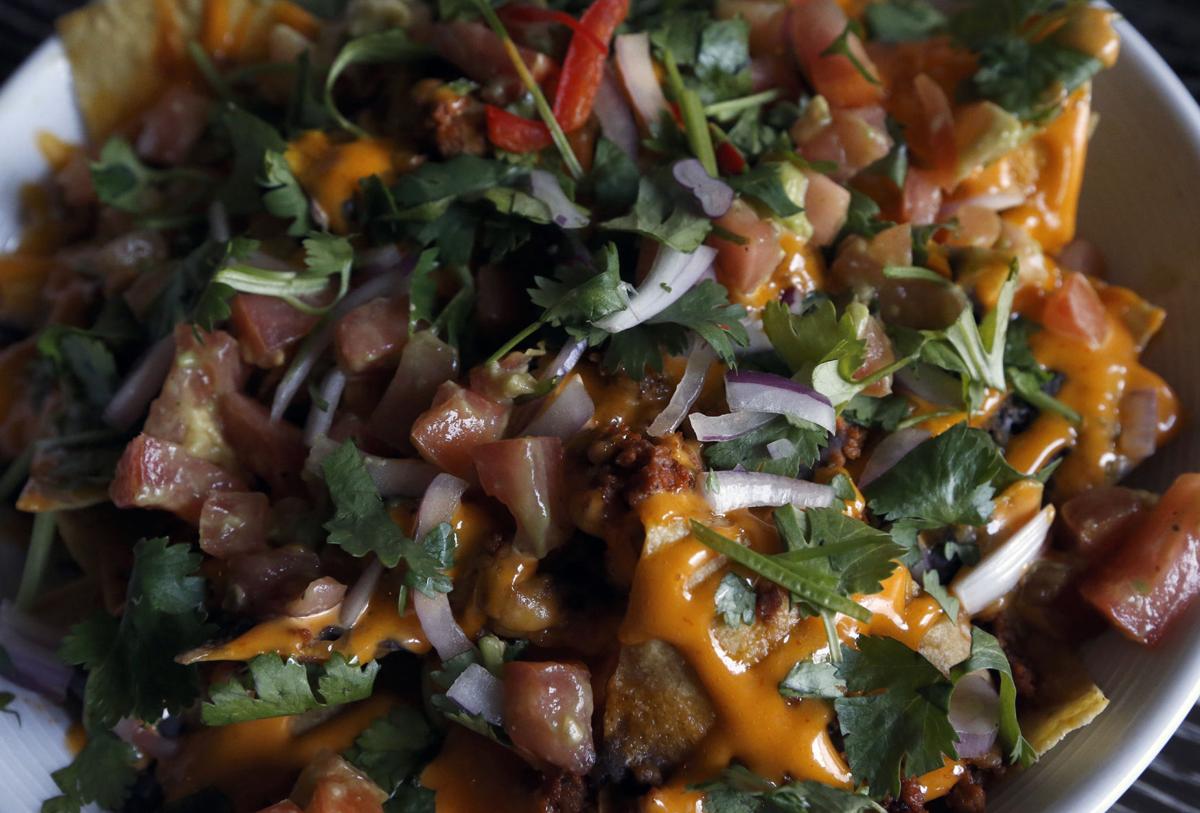 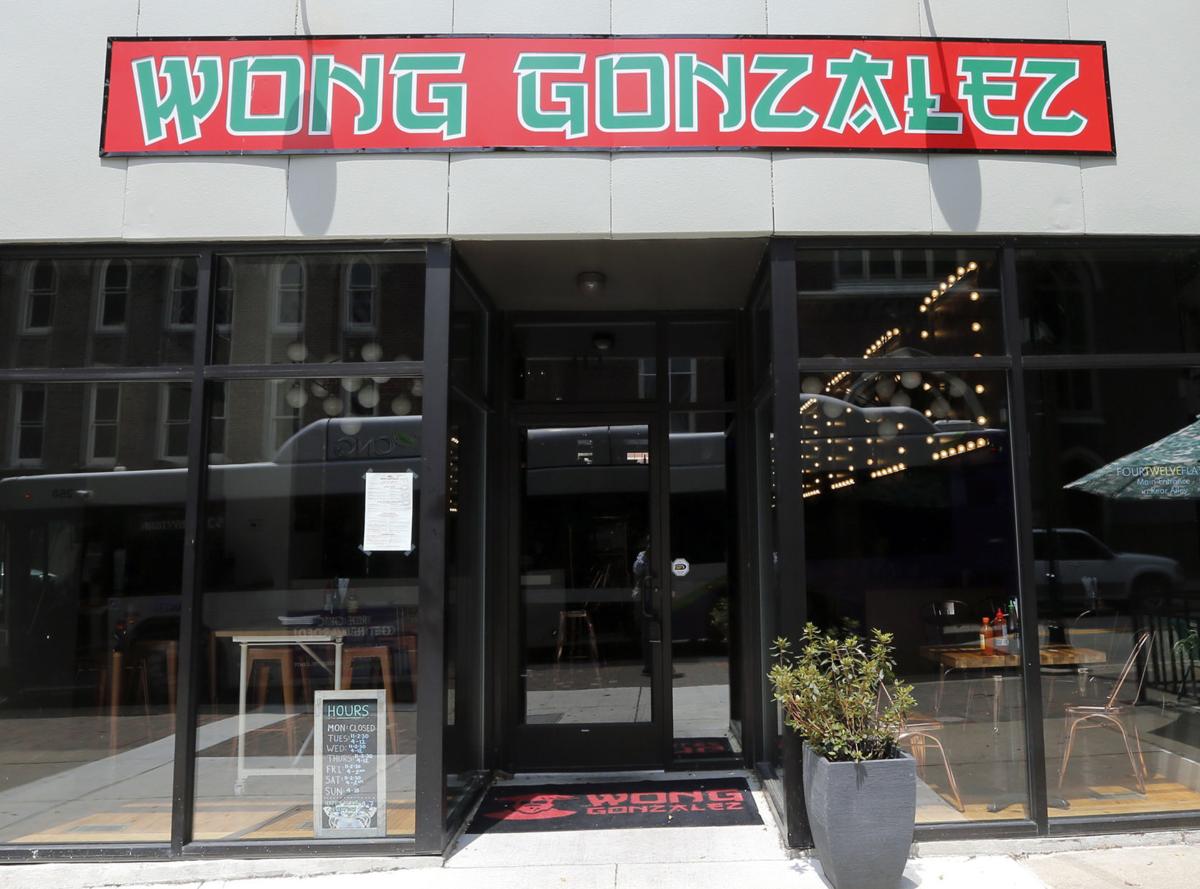 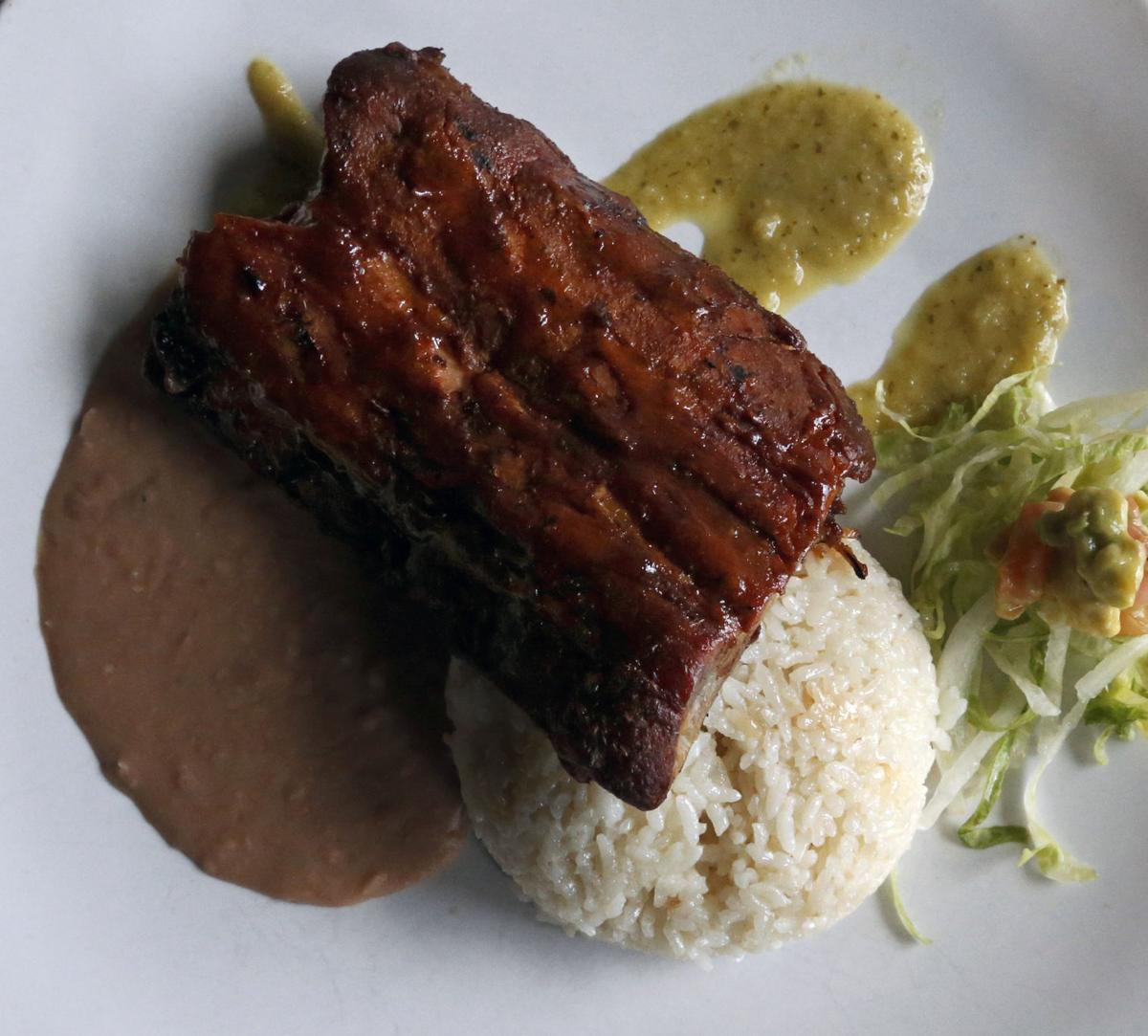 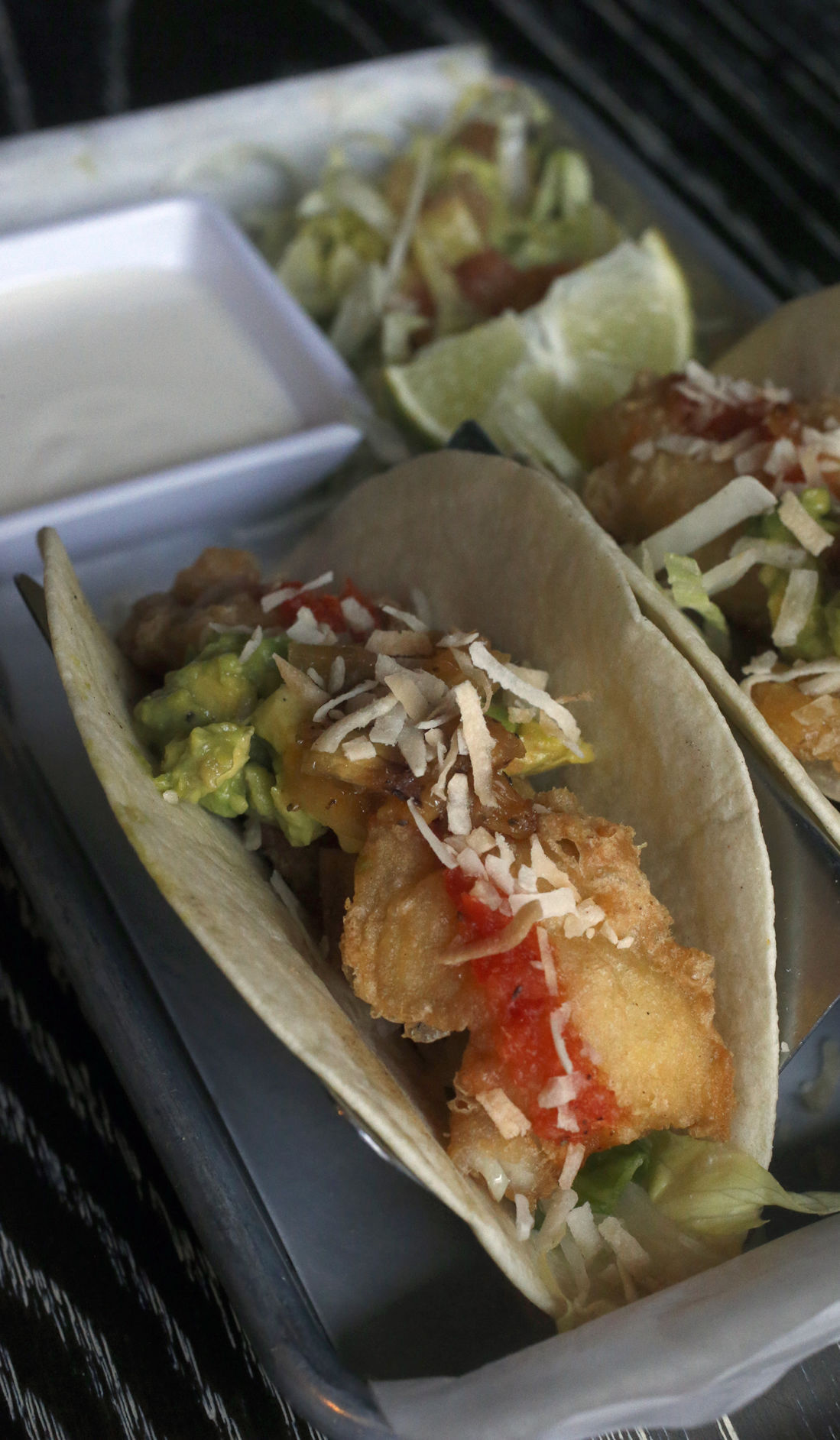 A combination of sweet flavors stands out in the Wong Gonz Silver Tacos entrée. 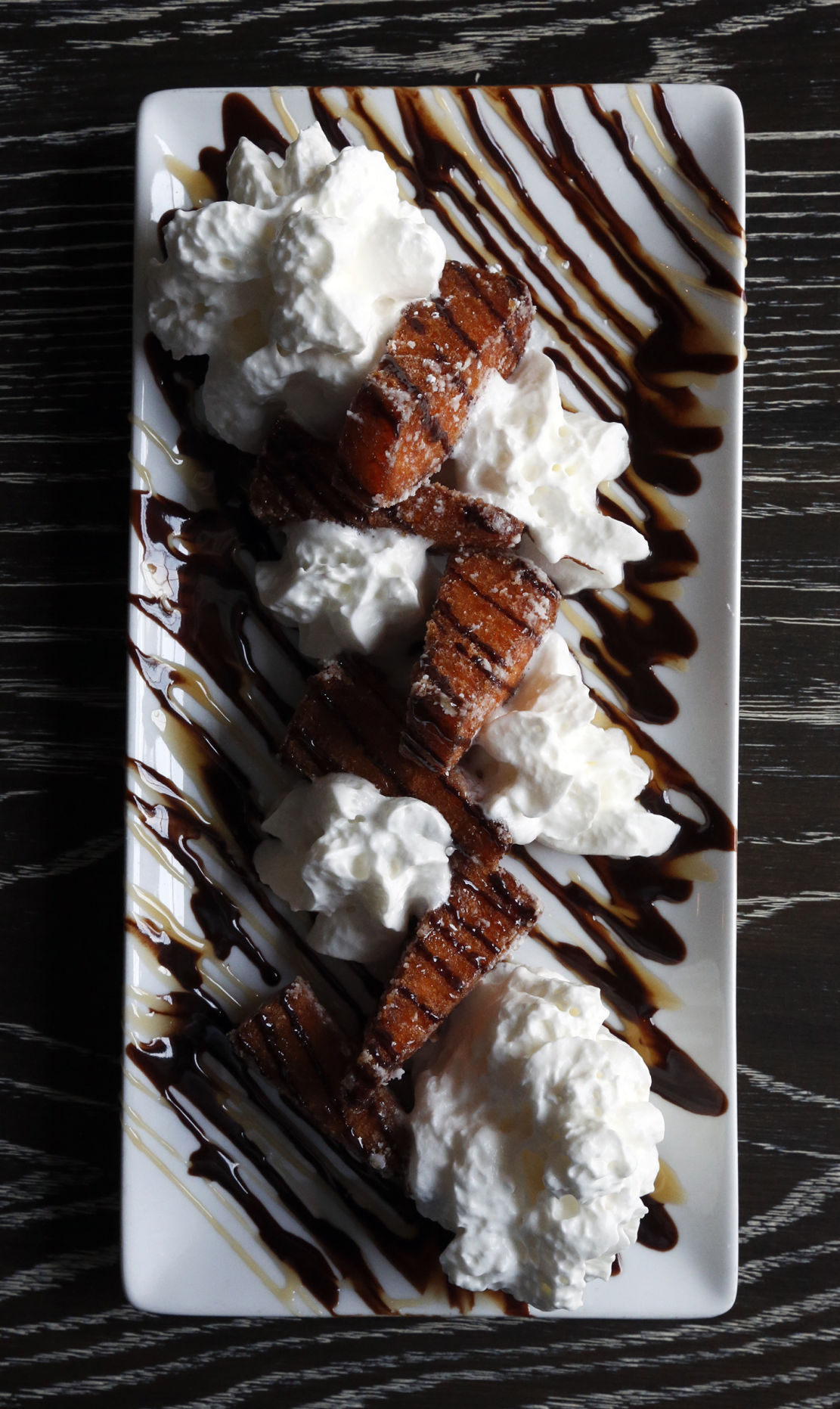 The sweet and fried aromas of the Fried Tequila Cake may stir memories of a state fair’s dessert section. 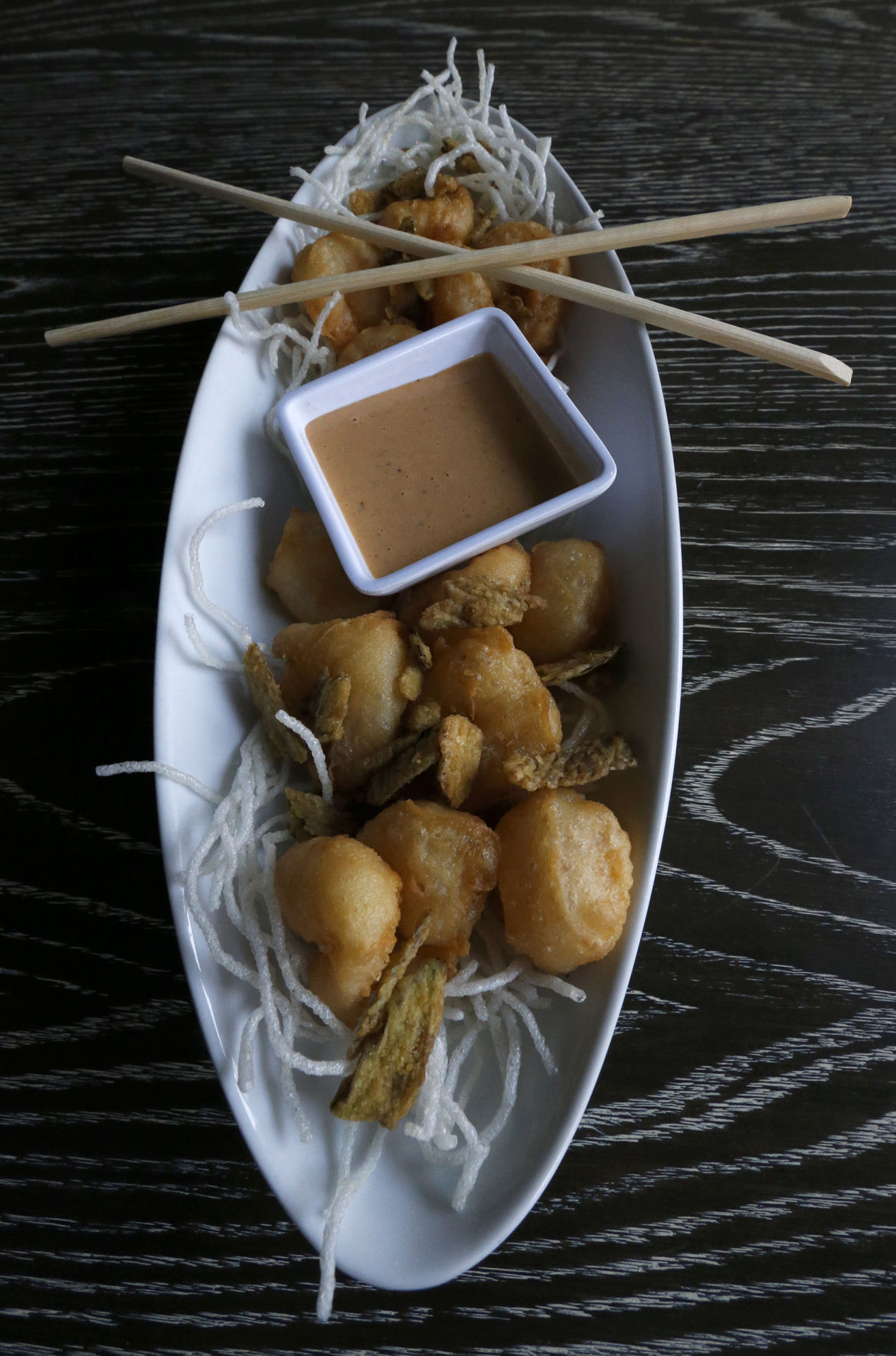 Spicy aioli complements the sweet-briny tempura-fried shrimp in an appetizer at Wong Gonzalez. 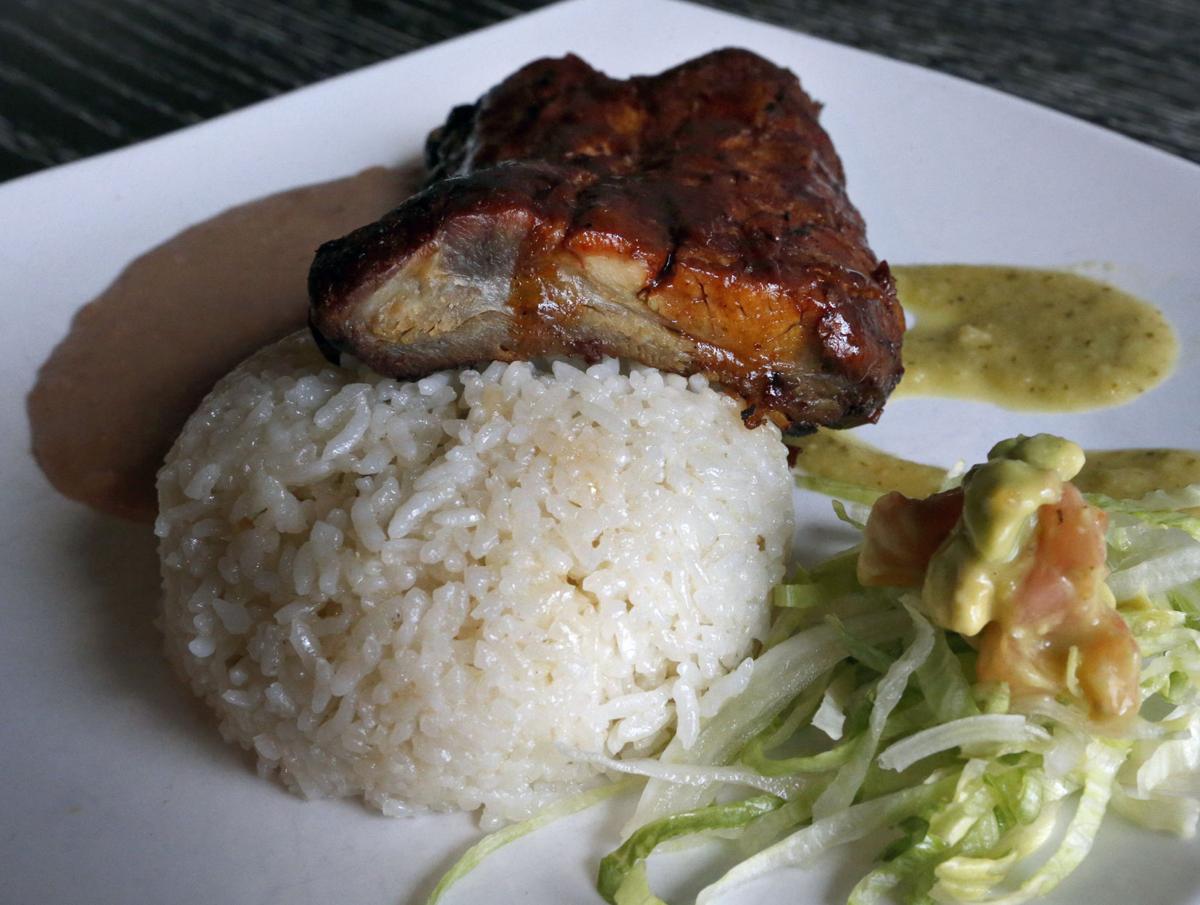 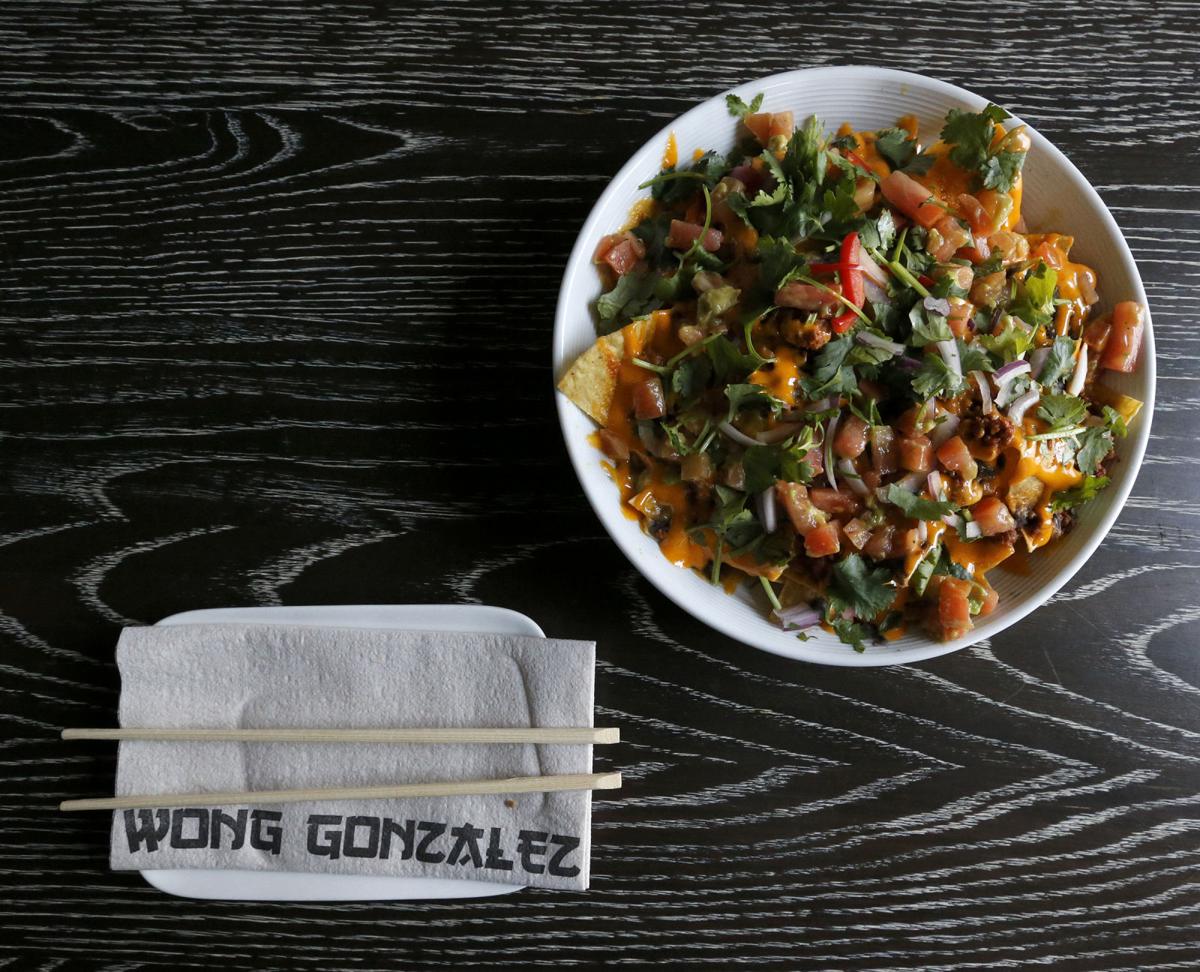 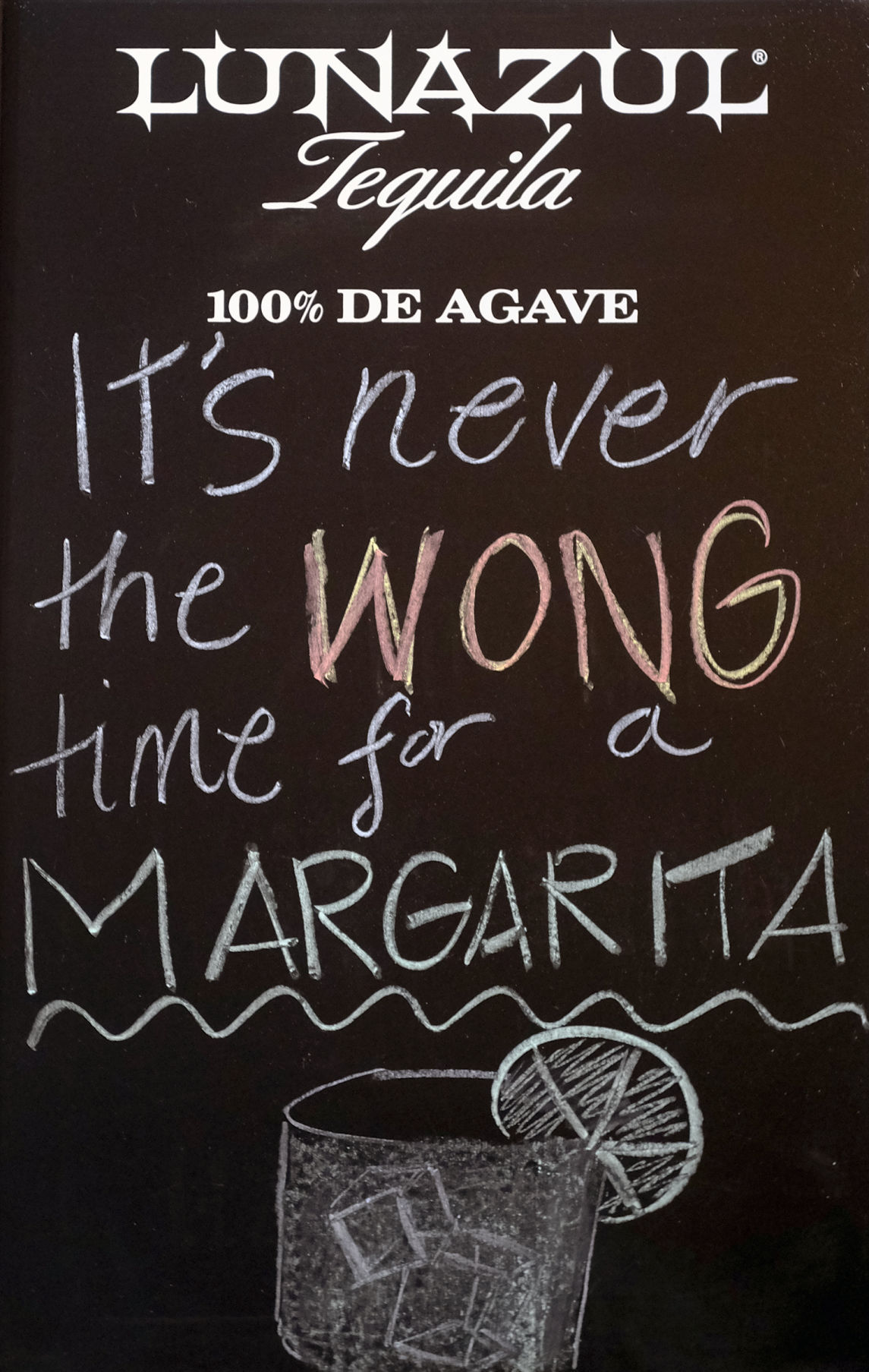 A sign beside the bar at Wong Gonzalez restaurant on E. Grace St. in downtown Richmond, VA Thursday, June 15, 2017. 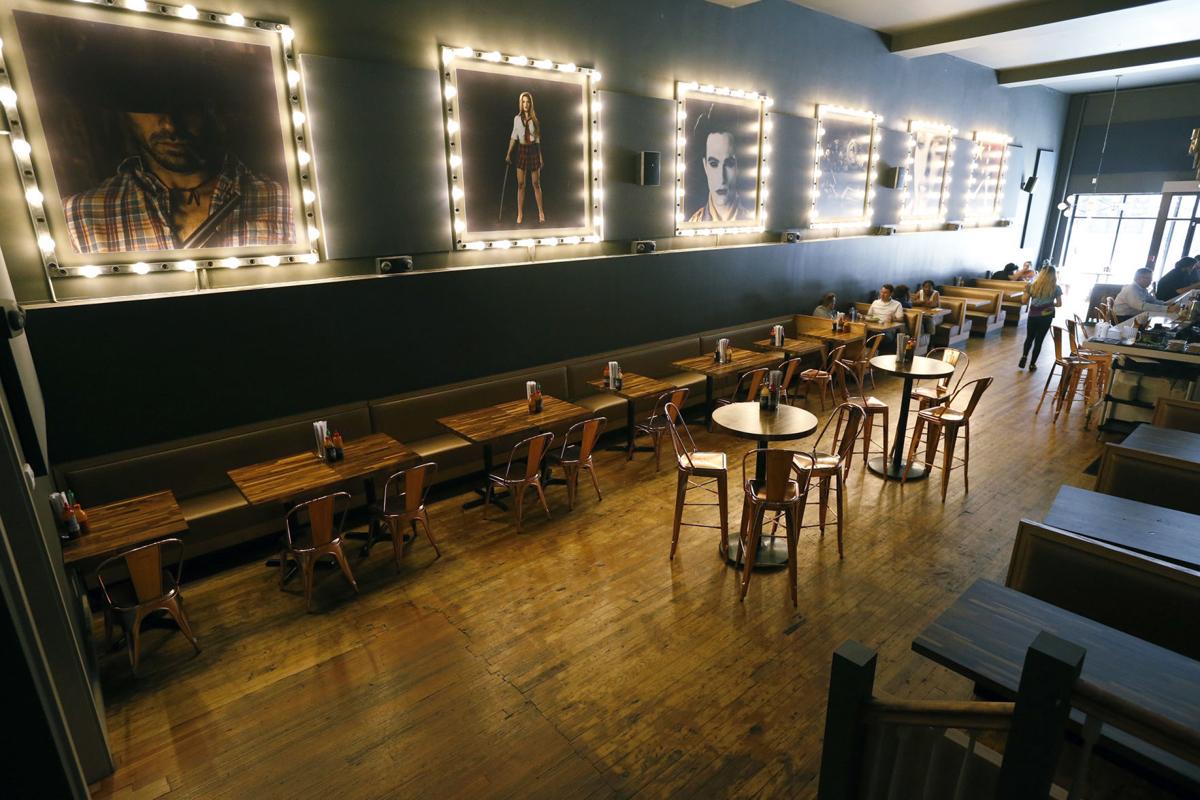 The fusion at Wong Gonzalez doesn’t stop with its Mexican-Chinese food. The 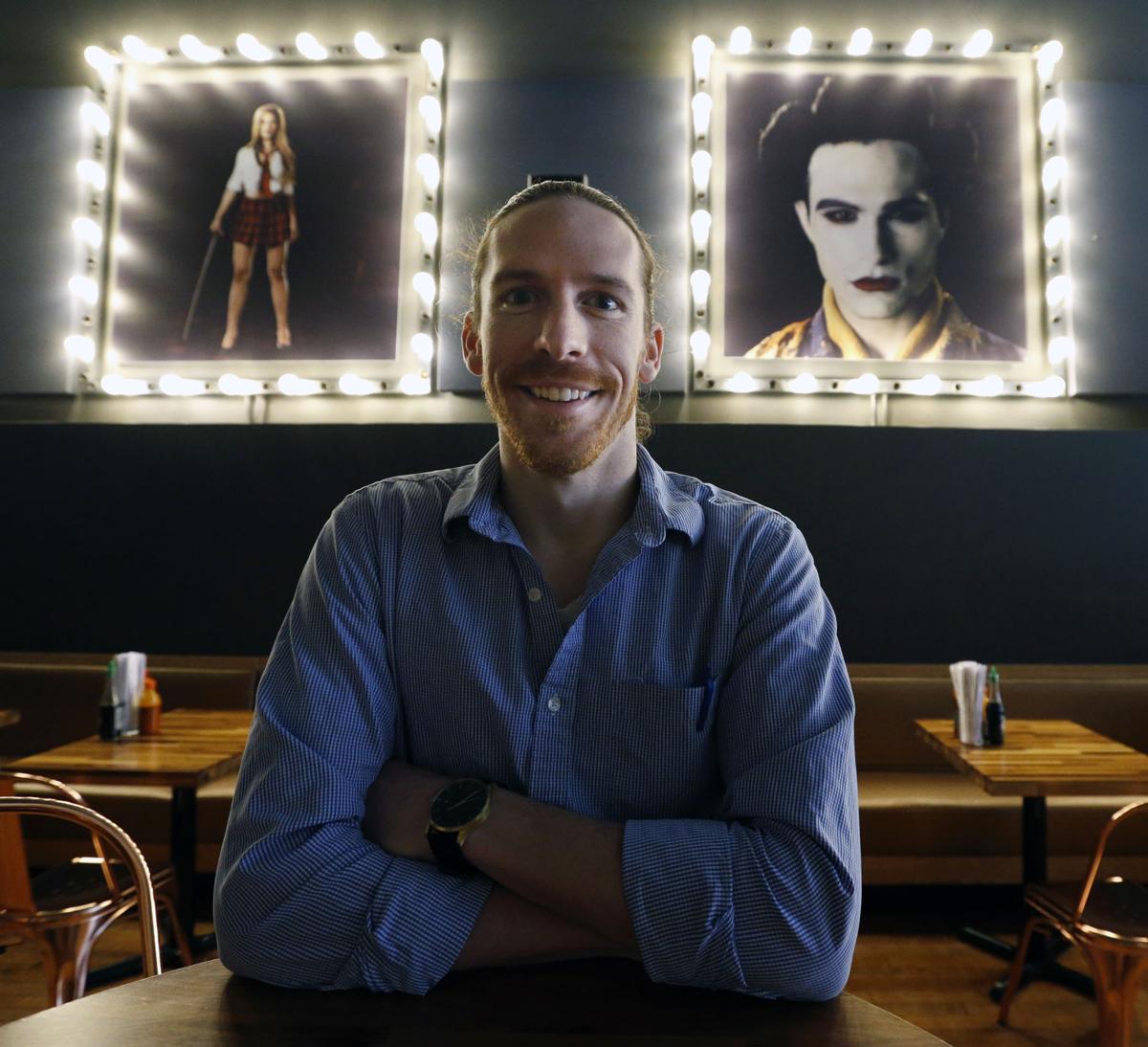 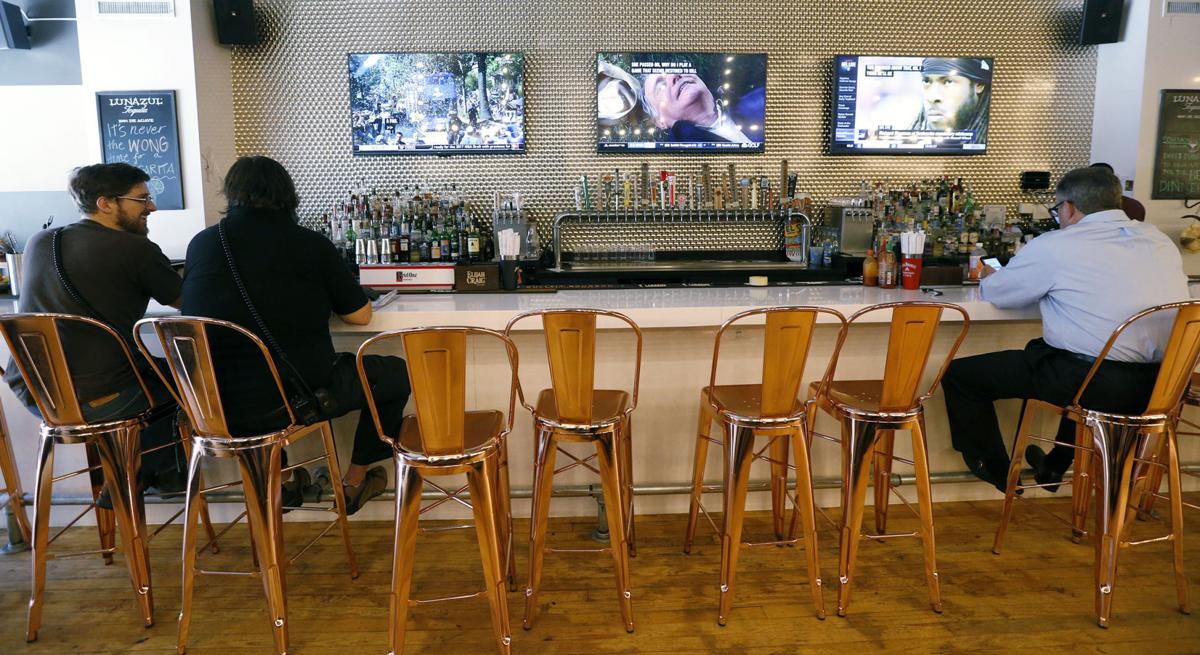 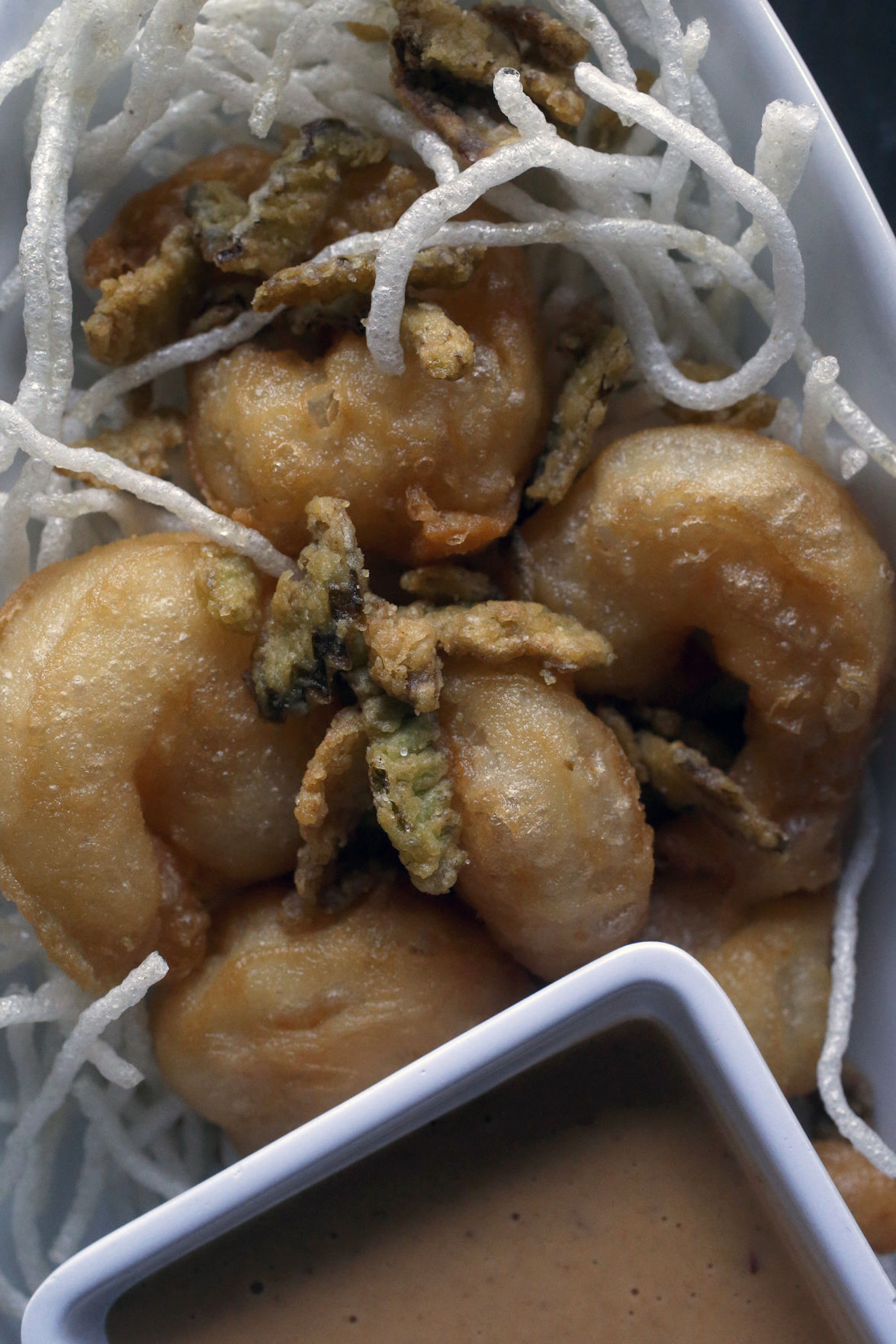 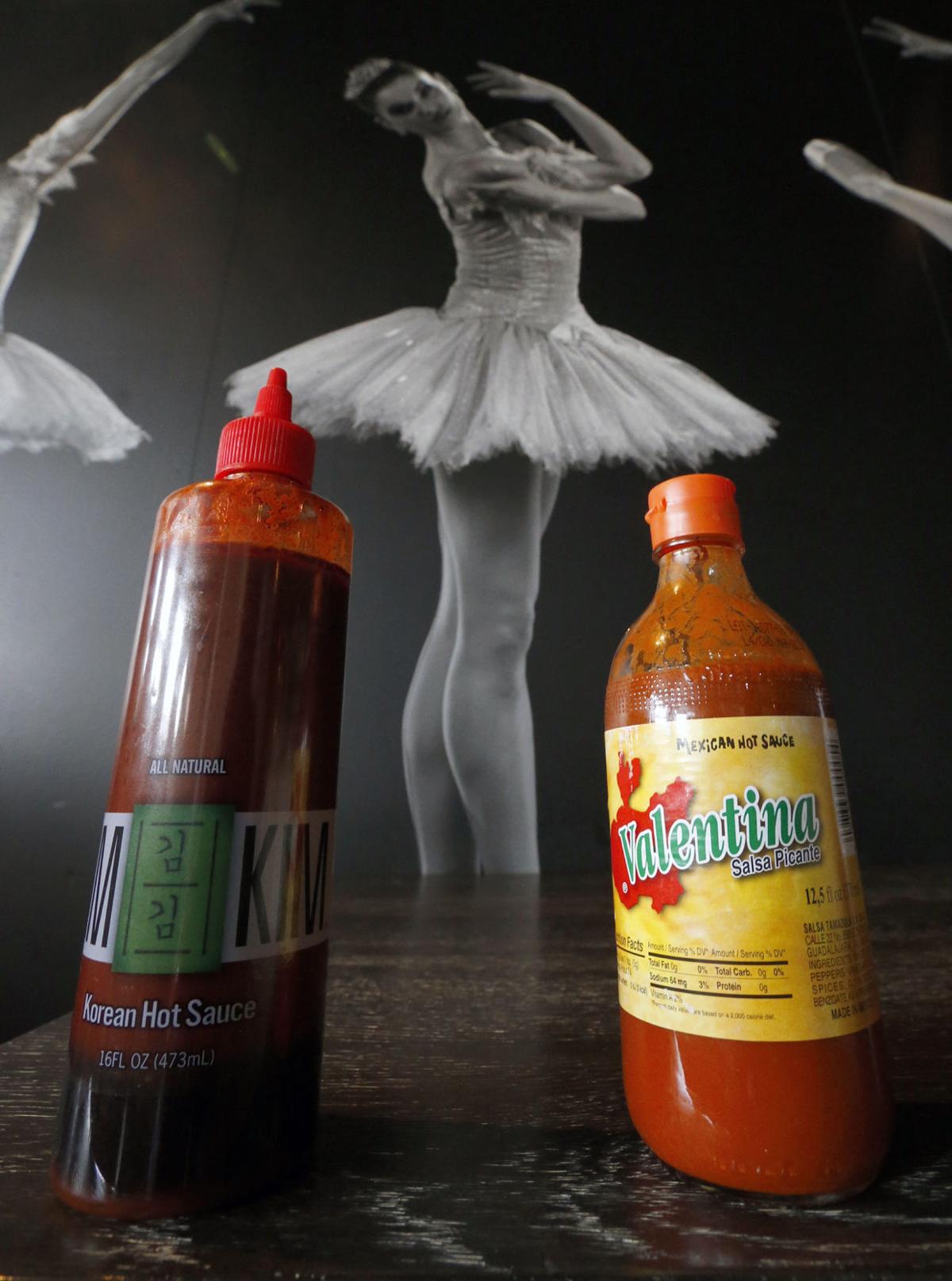 A combination of sweet flavors stands out in the Wong Gonz Silver Tacos entrée.

The sweet and fried aromas of the Fried Tequila Cake may stir memories of a state fair’s dessert section.

Spicy aioli complements the sweet-briny tempura-fried shrimp in an appetizer at Wong Gonzalez.

A sign beside the bar at Wong Gonzalez restaurant on E. Grace St. in downtown Richmond, VA Thursday, June 15, 2017.

The fusion at Wong Gonzalez doesn’t stop with its Mexican-Chinese food. The

The culinary world is filled with classic food combinations for the ages. Think chocolate and peanut butter, Brussels sprouts and bacon, cantaloupe and prosciutto, and the holy trinity of olive oil, garlic and onions in a sauté pan.

Mexican and Chinese combinations don’t generally leap to mind, it’s true. But the pairing is both fun and adventurous at Wong Gonzalez, which specializes in what it calls “Mexinese” fusion food. There, Korean baby back ribs share a plate with refried beans, wok-fried calamari is dipped in Mexican gyoza sauce, and chorizo becomes a star ingredient in fried rice.

The food isn’t the only fusion going on at Wong Gonzalez. The décor is a mix of showy gold tones and mellow woods with slate-colored walls. It works. The place is absolutely gorgeous. On a recent weeknight, this comfortable and casual setting was filled with a crowd that included singles and couples, young and old, and black, white and brown.

True to the Wong Gonzalez concept, the first dish to hit our table — the Chashu Pork Nachos ($8) — featured elements of both Latin and Asian cooking. Wow! When each of the components hit my palate at the same time, they created a flavor explosion — sweet, salty, fatty and spicy.

Delicate corn chips topped with crumbly chorizo, Cheddar cheese and pulled pork slow-cooked in a barbecue-garlic-ginger marinade combined for a tender yet crispy sensation. Hot and tangy Sriracha aioli generously drizzled on top — my friend kept calling it “magic sauce” — was the kick that held it all together.

The Tequila Shrimp appetizer ($7) featured shrimp fried in a delicate tempura batter and served with spicy jalapeño tequila aioli. The sweet-briny shrimp were complemented by the sweet-spicy heat of the aioli, which was significantly hotter than the Sriracha aioli that came with the nachos. Jalapeño chips sprinkled on the dish added a slow heat. The appetizer was satisfying, yes, but no match for the nachos, which are admittedly a hard act to follow.

The Korean Baby Back Ribs ($15) featured a half rack of tender ribs that were finished on the grill just before serving. The fall-off-the-bone meat combined the flavors of two barbecue sauces — one salty-savory and the other traditionally sweet — plus the charbroiled smokiness from the grill. The ribs were served with perfectly cooked sticky rice, velvety refried beans and a tomato-avocado salad livened with a hit of lime juice and salt.

The Wong Gonz Silver Tacos (2 for $6) had a tropical, almost floral, quality from a combination of pineapple habanero relish, strawberry yuzu sauce and toasted coconut over white tempura-battered fish served in a soft taco. The combination of flavors is extremely sweet, so if you’re generally a fan of savory, this dish isn’t for you.

For dessert, we ordered a Green Tea Ice Cream Sandwich ($5) made with a sugar cookie, green tea ice cream and white chocolate. The individual components were interesting on their own but didn’t work together well.

There was an unexplained 10-minute wait for the second dessert. When the Fried Tequila Cake ($5) arrived, both sweet and fried aromas filled the air, much like the dessert section of a state fair. The fried angel food cake was topped with a caramel-chocolate drizzle and a mist of tequila, which came through in every bite. As with the Wong Gonz Silver Tacos, the sweetness factor was high.

Great care has obviously been taken with both the food and the décor at Wong Gonzalez. There’s a bar — the centerpiece of the 1920s-era space — with a gold focal wall and bronze-colored barstools. The rest of the space combines golden chandeliers, rustic wood tabletops and an elegantly beat-up original wood floor. On the night I was there, an acoustic guitar player serenaded the crowd from a second-floor balcony.

The place has both a sense of style and a sense of humor. For example, there’s the Beauty & Grace Room for private parties, an affectionate nod to the building’s previous incarnation as a beauty boutique and salon. And then there are the two unisex bathrooms. One has a bright fuchsia wall with a giant image of a “Saturday Night Fever” John Travolta with a cigarette dangling from his mouth. The other, a tomato red wall with a giant Farrah Fawcett smiling in that iconic tomato-red-bathing-suit poster from the 1970s.

Wong Gonzalez is incredibly stylish, a good value for the dollar and, well, really loud. Around 7:30 p.m., the noise level went up like a rocket. (Ah well, what’s a little yelling between friends in a place this cool?) Plan a visit soon and give Wong Gonzalez and its take on Mexinese fusion cuisine a try for yourself.

Ideal for: apps and watching a big game on one of the three big-screen TVs at the bar

Best seat in the house: in one of the groovy bronze-colored stools at the bar

Vegetarian: some appetizers, some sides, three entrées; tacos and burritos can be made with tofu; kitchen accommodates vegetarian requests

Reservations: yes, for six or more