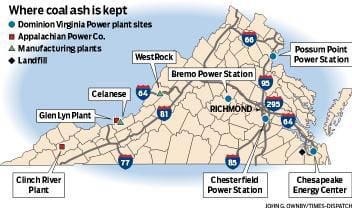 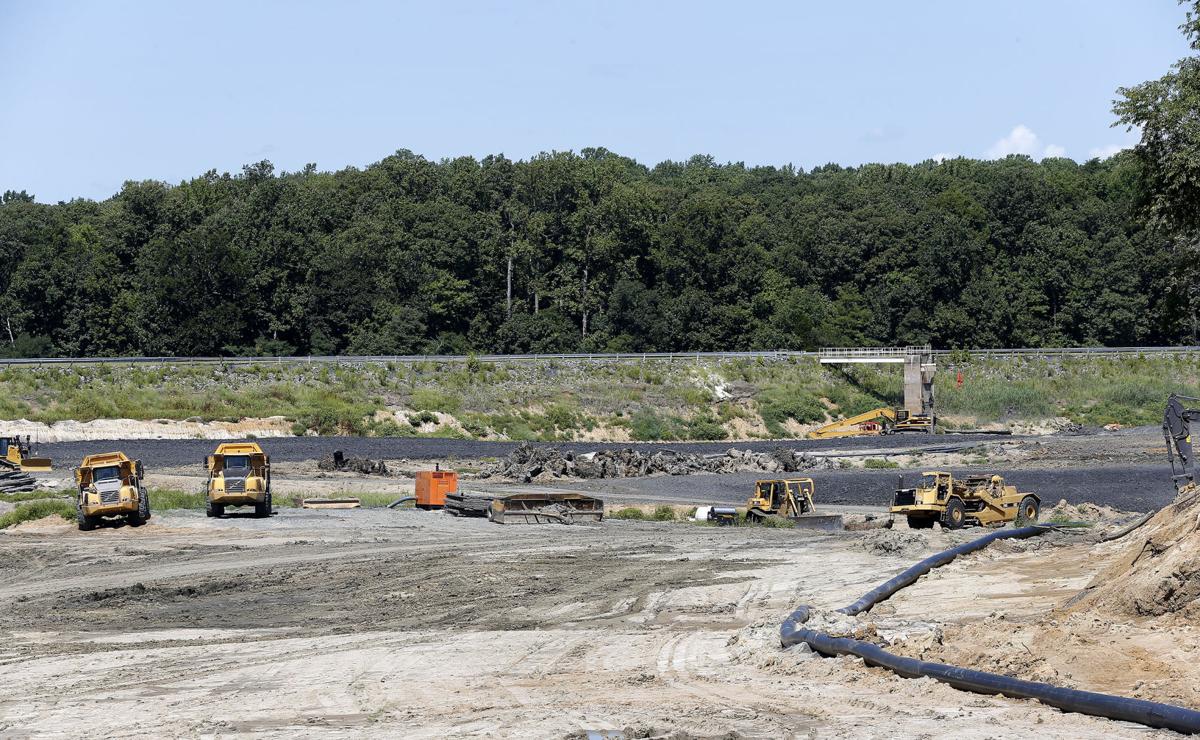 Dominion Energy on Friday released a massive report on its coal ash ponds in Virginia, a review that was ordered by the General Assembly earlier this year to assess existing contamination and develop estimates and options for excavating, recycling or, as the company previously proposed to do, to much backlash, consolidating and capping the ash on-site.

“This report provides the exact information that the General Assembly has asked for, it’s a Dominion Energy-specific, comprehensive study on the future management of coal ash,” company spokesman Robert Richardson said in a statement.

The 846-page report was prepared by AECOM, a global infrastructure and engineering firm, and will be presented to the State Water Commission on Monday.

“AECOM evaluated every feasible closure option for community impact, timeline and cost. And every option in the report is safe and protective of the environment and human health,” Richardson said.

According to the executive summary, the report presents myriad methods for closing and dealing with the ash at Dominion’s Possum Point, Bremo, Chesterfield and Chesapeake ponds, where more than 25.2 million cubic yards, roughly equivalent to some 30 million tons, of potentially toxic material left over from power generation has sat in mostly unlined pits for decades in some cases.

However, it remained unclear whether the report would alter any of Dominion’s plans, which environmental groups, some local governments, nearby residents and state lawmakers argue could allow heavy metals to leach into waterways for decades to come.

“It’s fair to say that our next steps will be informed by the report,” said Lisa C. Moerner, Dominion’s director of corporate policy.

The report explores options, expenses and time frames for “beneficial use,” or recycling the ash for use in products such as concrete, cinder block or wallboard; removing it to a modern, lined landfill by truck, barge and rail; and Dominion’s heretofore preferred method of closing the ponds in place. The report does not offer recommendations, though it does present some eye-popping numbers.

Closing the ash ponds just at the Bremo Power Station in Fluvanna County, for example, by removing the ash from the north bank of the James River to an offsite landfill by truck is estimated to take 13 years and cost $1 billion. Moving it by rail is estimated at 10 years and $1.53 billion, the report says.

Recycling Bremo’s roughly more than 6.2 million tons of ash, the report says, could take up to 27 years and cost anywhere from $593 million to $1.3 billion, depending on market demand and available technologies. On the other hand, capping it onsite, with “potential groundwater corrective measures,” would take three to five years and cost $98 to $173 million, the summary says. At Chesterfield, where nearly 15 million cubic yards of ash is stored, the report estimates beneficial use could take up to 53 years and cost $4.25 billion.

The company said the report is intended to offer a menu of options as Dominion, regulators and lawmakers come to grips anew with a permitting process that the General Assembly paused earlier this year after a seesaw legislative battle over coal ash during this year’s session that ended with Gov. Terry McAuliffe reinserting provisions into a bill that prevented the state from approving permits to close the ponds before the assessments were competed.

Sens. Scott Surovell, D-Fairfax, and Amanda F. Chase, R-Chesterfield, pushed the bill amid widespread concern from environmental groups, some local government officials and people who live next to the ash ponds that the unlined ponds are leaking contaminants such as arsenic and other heavy metals into adjacent waterways. They feared capping them in place as Dominion was pressing to do would allow that seepage to continue and potentially force a more expensive clean-up in the future.

After passing the Senate, the bill was gutted in the House of Delegates but McAuliffe’s amendment, which went unopposed by the utility, restored crucial pieces and delivered a win for lawmakers and environmentalists looking to put the brakes on the permitting process.

In March, a federal judge ruled that arsenic from ponds at Dominion’s now-closed Chesapeake Energy Center was seeping into the Elizabeth River. The judge ordered Dominion to file new permits to close the Chesapeake ponds that could not include a “cap-in-place plan.”

However, the judge later amended the order to say that Dominion’s “proposed plan shall not include a plan to only cap the coal ash in place,” clarifying that corrective measures to address groundwater at the site could not be limited to capping the ponds in place. Dominion says it plans “to propose additional corrective measures to address groundwater impacts at the site and stated unequivocally that the final remedy will not be solely capping the ash in place. “

The company has also filed an appeal in the case.

Tests performed by a Duke University team have shown leaking at the Bremo and Chesterfield coal ash ponds. And a pair of residents near the Possum Point plant, where Dominion has agreed to connect some locals to public water, sued the company, alleging heavy metals that have shown up in their drinking wells came from Dominion’s ash ponds.

The AECOM report acknowledges that common metals found in coal ash were detected above EPA standards in groundwater monitoring wells at all four sites.

“The detections were isolated to areas adjacent to the ash ponds and do not affect drinking water supplies,” the report says. It adds that tests of nearby surface water “indicate that all constituent concentrations are below Virginia Surface Water Quality Standards” for aquatic and human health. The report also notes that several technologies, including slurry walls, systems that pump out and treat contaminated groundwater and permeable barriers that filter out heavy metals, could be employed to cap the ash on site and prevent groundwater contamination.

‘It hasn’t changed anything yet’

Dominion has long insisted that capping the ponds with a synthetic liner, covering them with a layer of turf and using monitoring wells to check groundwater for years to come will protect the environment and is the most economical and swiftest way to meet new federal guidelines for coal ash facilities after high-profile spills in Tennessee and into the Dan River on the border with North Carolina. Dominion has already received permits to treat and discharge water from the ponds at Bremo, Possum Point and Chesterfield, though it halted the process at Possum Point this summer to adjust the treatment system.

“We’re following a regulatory process. That part doesn’t change,” said Joshua Bennett, the company’s vice president of technical services. “These are technically feasible options. Everything is on the table for what we’ll end up doing. ... It hasn’t changed anything yet, but these options are available to us to consider.”

He added that Dominion has been contacted by numerous companies interested in reprocessing the ash into other products.

Solid waste permit applications, which govern how the company will close the ponds, are pending with the Virginia Department of Environmental Quality for Possum Point in Dumfries and Bremo. It is unclear whether Dominion will withdraw, amend or continue to pursue those applications, which the General Assembly prohibited the department from approving until May.

Surovell said he intends to introduce legislation dealing with coal ash management in the coming session.

“The biggest omission from the report is that the report failed to put any kind of cost or expense or dollar value on the human cost and environmental cost of continuing to damage the environment by leaving this stuff in leaky ponds,” he said.

Still, Surovell, long an advocate for recycling ash, said the report demonstrates it’s “a feasible solution to this problem that will not only permanently resolve this problem once and for all but will create a lot of jobs in the process, which would be a net benefit for everyone in Virginia.”

Nate Benforado, an attorney with the Southern Environmental Law Center in Charlottesville, which has fought Dominion’s plans to close the ponds onsite, said the organization would review the report but called it “disappointing” at first blush.

“It kind of appears laser-focused on justifying what Dominion’s plan has been all along and that is leaving the ash in unlined, leaking pits,” Benforado said. Benforado said the report also fails to acknowledge what environmental groups and a federal court have found: that contamination from the ponds is making its way offsite.

In a statement, the law center said the report “appears to drastically overstate the time and cost associated with removing the ash.”

It noted that North Carolina utilities are excavating 46 million tons, with 12 million already out of the ground.

“I don’t want to say whether it’s good faith or not,” Benforado said of the AECOM report. “We don’t think some of these other options really got a fair chance.”

The SELC released its own report Thursday, authored by faculty at the University of New Hampshire, that said “beneficial use of impounded coal ash for concrete is a feasible, cost effective alternative for cleanly closing legacy ash ponds at Dominion Energy Virginia power stations.”

“There is a strong demand in the market for high quality coal fly ash and there are technologies commercially available and operating in the region that currently are producing high quality ash for the concrete market from landfilled or ponded ash,” the report says. “Representatives from the concrete industry have stated the need for high quality ash sources in the Virginia region and have indicated a willingness to set up long-term contracts for ash suppliers.”