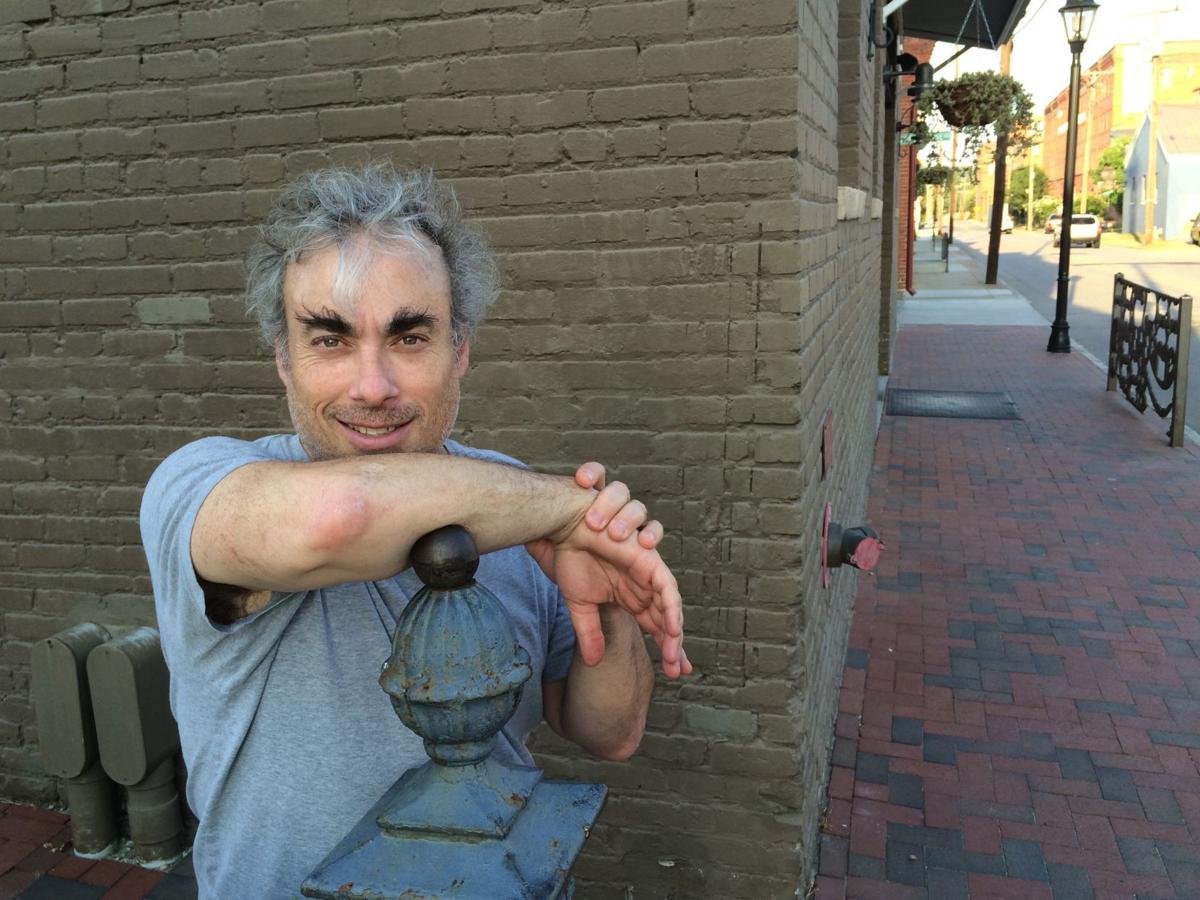 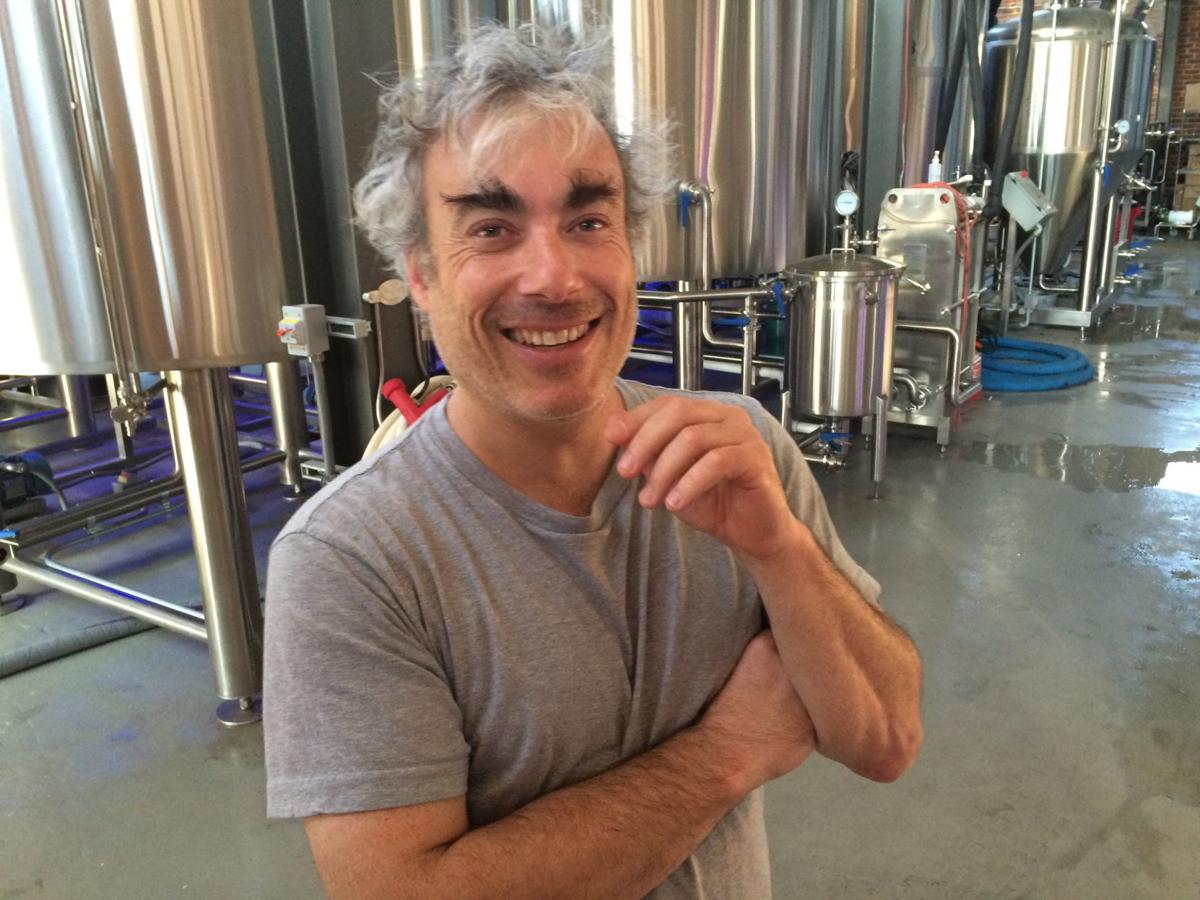 Dave McCormack is showing Petersburg the path out of its headline-making abyss.

Dave McCormack is showing Petersburg the path out of its headline-making abyss.

PETERSBURG — Nearly 20 years ago, I became a Dave McCormack fan.

He wrote about the same offbeat, human stuff that I love, only better. His stories in Style Weekly and early Richmond.com were must-read, totally RVA.

And the songs he wrote and sang with his brother in their band Meanflower hit that earthy, heartfelt Americana sweet spot that millennials so crave today.

I’d see him around town, looking a bit dusty — the vagabond troubadour who could write oh-so visually, the guy who lived three years straight in a 1974 Dodge camper.

“Best time of my life,” he recalled Thursday as we strolled around the amazing blocks of riverside Petersburg that he has transformed to the tune of some $50 million.

Yes, I too have written my share of offbeat stories, but this one may be the capper.

How on God’s green earth does this guy — still looking like the vagabond troubadour but now older with amazing nutty-professor eyebrows — become this genius developer who is showing Petersburg the path out of its headline-making abyss?

“We came down here to play music, to practice. Get a warehouse on a back street, be loud and not bother anyone. In 2000 in Petersburg, there was no one to bother.”

He bought the front office portion of the vast Mayton Transfer building on East Bank Street because it was incredibly cheap.

“We didn’t have jobs. We were living in freezer suits.”

They heated their rundown digs with coal they picked up from the nearby railroad tracks. They made friends.

“Petersburg was providing everything we needed,” he said.

The man who owned the rest of the Mayton warehouse wanted out, and Dave, who had saved up money and knowledge flipping a few houses in Richmond’s Battery Park, took the plunge.

In 2005 came the rumble that Fort Lee was expanding.

And thus hatched the plan to convert the warehouse into lofts.

At a time when few believed in Petersburg, BB&T Bank bought into the idea. Historic tax credits helped.

They started work on just one-third of the building, leaving the other two-thirds untouched — including a big section that had burned.

The stuff they found as they gutted it ... termite tubes 10 feet long, pump organs, a fleet of pianos, “bird cages big enough to get into.”

“It worked,” Dave recalled. “It was a miracle.”

They would convert the rest of the building — 200 apartments total.

He’s up to 320 apartments in 15 old industrial buildings, some that were so rundown that their walls or roofs were lying on the ground.

“Just bought this police building from the city,” he says as we walk past the old detective annex, site of the infamous evidence locker thefts that launched an FBI investigation.

The first of his ground-floor businesses was Demolition Coffee, now a thriving destination spot.

“It’s a metaphor for me,” he says of the name. “Demolish the old way of doing things.”

We run into his builder, Kris Haase, also still young with the same kind of boho ease as Dave.

“He buys a bunch of old garbage, and I turn them into beautiful things,” Kris says teasingly. Actually, he admits, he makes Dave’s visions come to life.

Sometimes, it can get really wacky, he says.

“I have a blast working with this man,” Kris says as we hang out in front of Demolition Coffee. “Every day is definitely a new one.”

For example, when he and Dave built Demolition (with its 13 apartments), “I didn’t know I was going to be making the coffee. Now, I’m a master barista,” he says, laughing.

You hear that same excitement and fun from many who have partnered with Dave and his visions.

He recalls his future boss and mentor saying, “I need more of this. What more can you do?”

During the next three years, they totally rebuilt an old ice complex around a huge, computerized brewery, complete with a chilled storage building big enough for a tractor-trailer. Dave spent $300,000 in brick repair alone.

And James is on top of the world. His beers and the pub with its busy designer pizza oven are a hit, another powerful reason to come to Petersburg. (The brewery itself is a cool place to hang out, with acoustic guitars at the ready.)

That’s the formula, Dave tells me as we continue to check out building after building.

“I’m not going to build a building and hope a brewery shows up,” he says.

It’s about team dreaming and then building around it, harnessing tax credits and other revitalization loans.

For example, couples such as Ben and Laura with Buttermilk Bake Shop are like a family whose dream Dave bought into.

“I’m not the landlord; they’re not the tenants,” Dave says.

But underlying all this is the need for these blocks and businesses to harmonize to make this riverfront a place to live and visit.

“Here’s the key,” Dave says, offering me an imaginary front-door key. “You must kick ass.”

There’s where the new distillery and malting plant will go. And over there is the building of “Tuba Tom,” importer of fine tubas.

And yes, there’s brother Tom’s Saucy’s Sit-Down and Saucy’s Walk-Up, which was famously tapped as one of Southern Living’s best BBQ joints in its June 2012 issue.

Then we walk through the vast former warehouse now called The Bosco, which houses apartments as well as a complete film production studio, including soundstage, offices, costume storage, kitchen and apartments for cast and crew.

“Can I help you?” a woman asks curiously as we wander through one hall of the bustling complex.

Turns out she’s the producer of an indie feature-film project by a big name from Hollywood. (Of course, it’s all hush-hush.)

Dave’s wearing a tired gray T-shirt and shorts, and I’m no better.

“I’m Dave,” he says, reaching out to shake her hand. “I own the building.”

“Oh,” she says, brightening. “This has been amazing for us!”

Dave is now 47 with a girlfriend and young children sharing his first old place here.

He tells me he’s doing the same kind of shared-dream development in other old towns including Vinton, Va., and Wilson, N.C.

I look at him, and we both laugh.

This guy, the gifted writer, the vagabond troubadour, now attracting tens of millions of dollars and transforming neighborhoods — and lives — with a heartfelt new tune.

Neither one of us could’ve dreamed up a story like this.

Mark Holmberg’s work can be seen at Richmond.com and WTVR.com. He can be reached at mholmberg@tribunemedia.com.