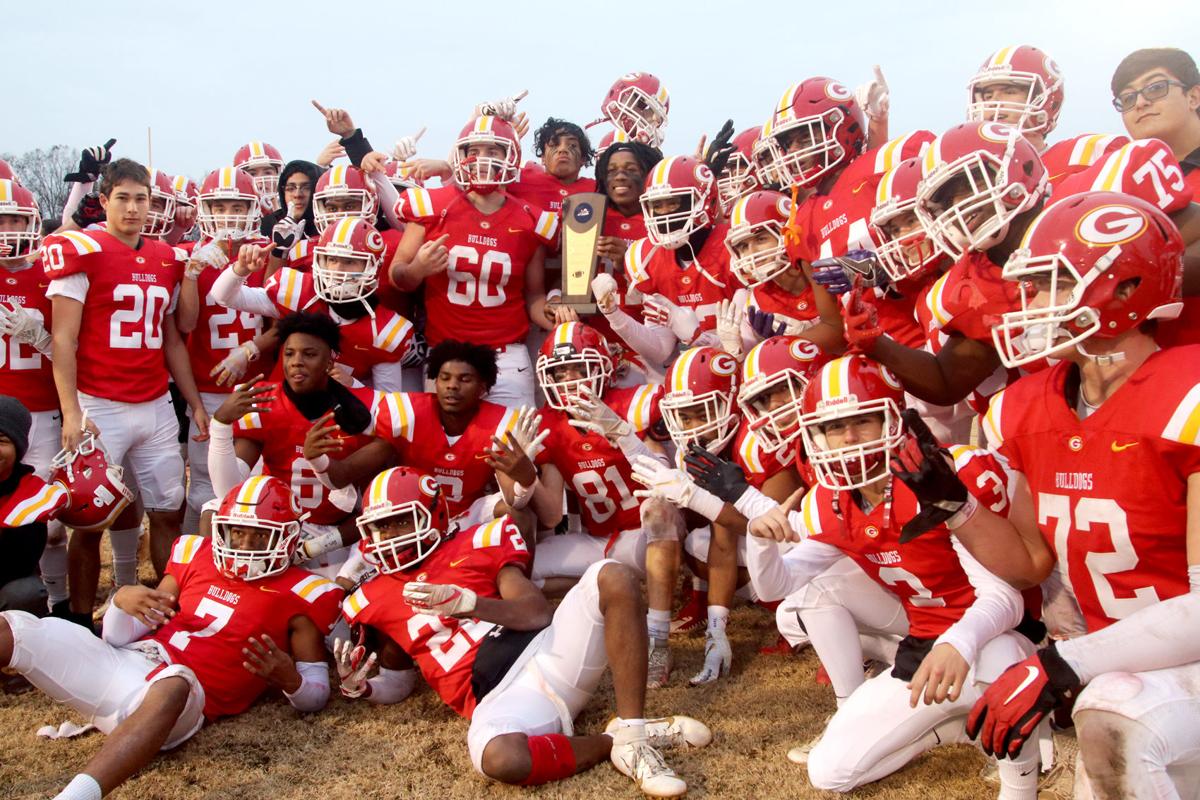 The Goochland Bulldogs celebrate as the Class 3, Region B champions after defeating James Monroe 20-7. 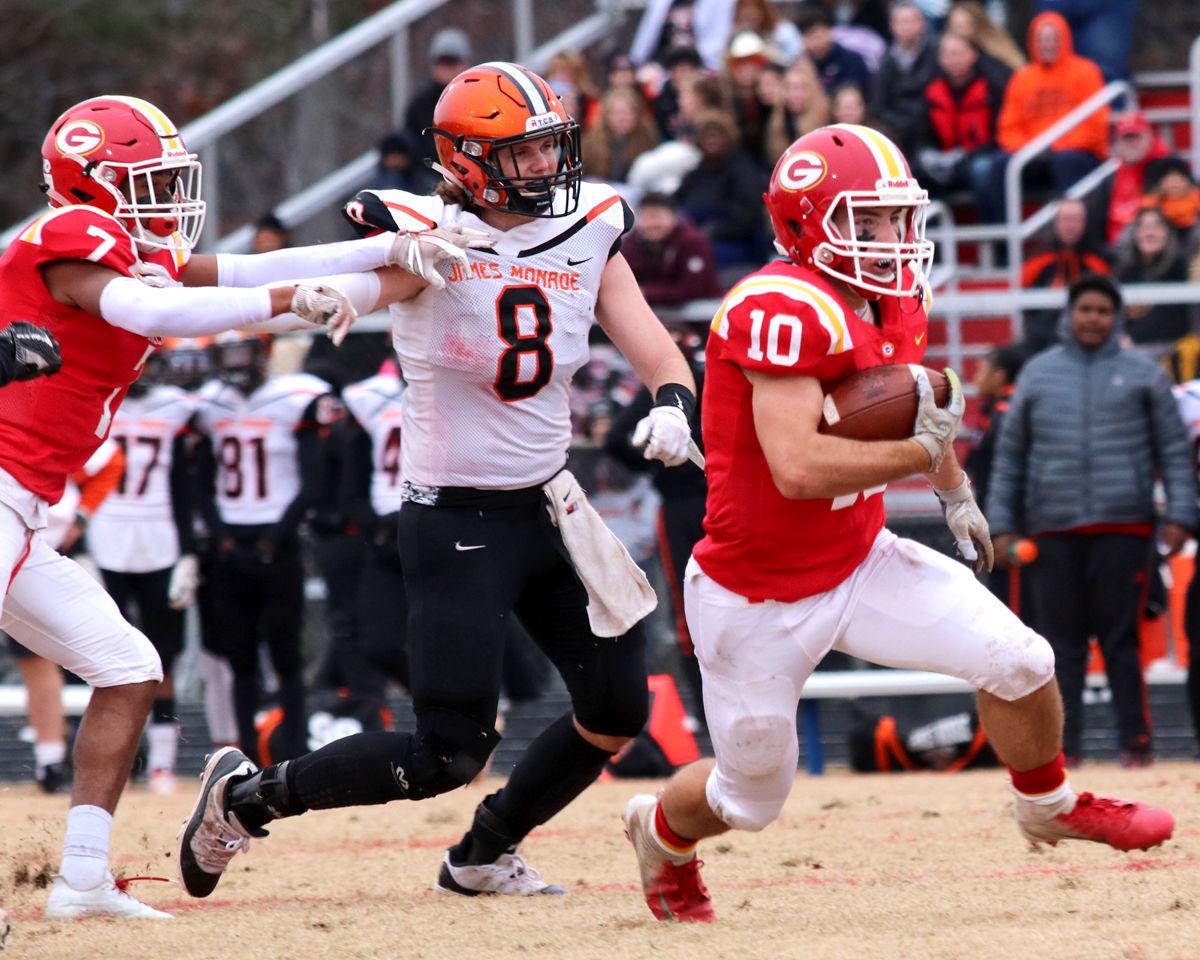 Conner Popielarz (10) breaks free for a run while Devin McCray (7) attempts to block for him. 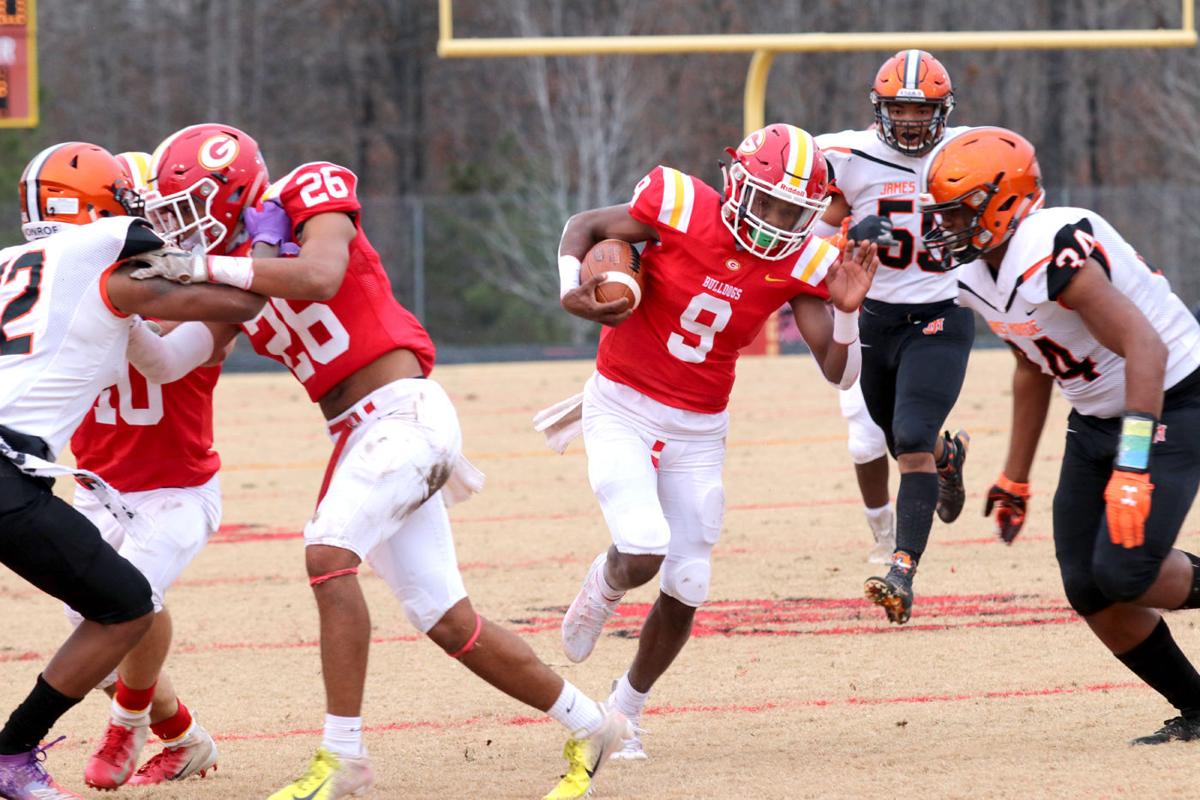 NyJavion Timberlake (26) blocks a defender while CJ Towles (9) runs through an opening.

The Goochland Bulldogs celebrate as the Class 3, Region B champions after defeating James Monroe 20-7.

Conner Popielarz (10) breaks free for a run while Devin McCray (7) attempts to block for him.

NyJavion Timberlake (26) blocks a defender while CJ Towles (9) runs through an opening.

As teams move up in post season play, the importance of eliminating mistakes and keeping turnovers to a minimum becomes more telling with each game.

James Monroe learned that lesson the hard way as they dropped a 20-7 decision to Goochland in the Class 3, Region B championship game.

Goochland picked up seven turnovers, and the Yellow Jackets’ lack of ball control prevented them from establishing any rhythm against a Bulldog defense that resembled a heat-seeking missile.

“The defense was everywhere and really made their quarterbacks feel our presence, which forced mistake after mistake,” coach Alex Fruth said after the win, adding: “Those seven turnovers were unbelievable! Many of those were forced, which was nice to see the things we practice show up on the field.”

As the playoffs continue, Fruth said the team’s ball-hawk ability is a recipe for success.

“Football is all about the ball, which is totally a cliche, but if you can protect it, they can’t score,” Fruth said. “If you can take it away, they can’t score. We have to do better protecting it, but man did we get after them and make good things happen for us on defense.”

Quarterback CJ Towles complemented that stellar defensive performance by running an efficient offense that challenged a stout Yellow Jacket defense. The sophomore completed 10 of 13 passes for 145 yards and two touchdowns.

The Bulldogs set the tone with a game opening seven-minute drive capped by a touchdown pass from Towles to NyJavion Timberlake for a 6-0 lead.

Later in the opening quarter, Towles found Devin McCray with a 12-yard strike to give Goochland a 13-0 lead.

Following a Timberlake interception, Conner Popielarz split the defensive line and rumbled for a 41 scoring run. The Bulldogs went up 20-0 at the half.

Even with the 20-0 score, the Yellow Jackets remained dangerous with offensive potential, but the Goochland defense wouldn’t budge.

The visitors posted their only score of the day late in the game when Tahj Smith scored from one yard out.

After the regulation clock reached zero, the Bulldogs hoisted their first Region 3B trophy, an accomplishment many doubted as the team made its first entry in Class 3 play this post season. Goochland also advanced to the state semifinals for the third time in the last four years.

But, the work isn’t over, and Fruth knows the next assignment gets even harder as the team travels to Hopewell this week.

“This is going to be a big task,” Fruth said. “New environment, new opponent, and a new opportunity. That is the entire reason we scheduled Lafayette and picked up the Blue Ridge game, in order to have an idea of what it takes to do what we will be doing this weekend traveling to Hopewell.”

The Blue Devils, who won the state championship in 2017, sit atop what many consider the toughest region in Class 3.

“That Region A is as tough a region as it gets in the state, regardless of classification,” Fruth said. “But it’s going to be a great opportunity to go compete against one of the best teams in the State of Virginia.”

Fruth is seeing more than victories on the field as his team prepares each week for a new challenge.

“One of the biggest aspects of high school football is the fact that you have to keep building and improving each week,” he said. “We’ve been able to say that we really have done a good job in this area.”

“Now, that’s not saying we are a finished project, but that we keep striving to really put a product out there that will compete,” he said, “and strive to improve each day and each play.”

It all comes back to a simple message, repeated many times.

“Goes back to our year theme of doesn’t matter, get better,” Fruth said. “We can’t settle on the idea that we are winning, but rather focus on what we can do to keep improving.”