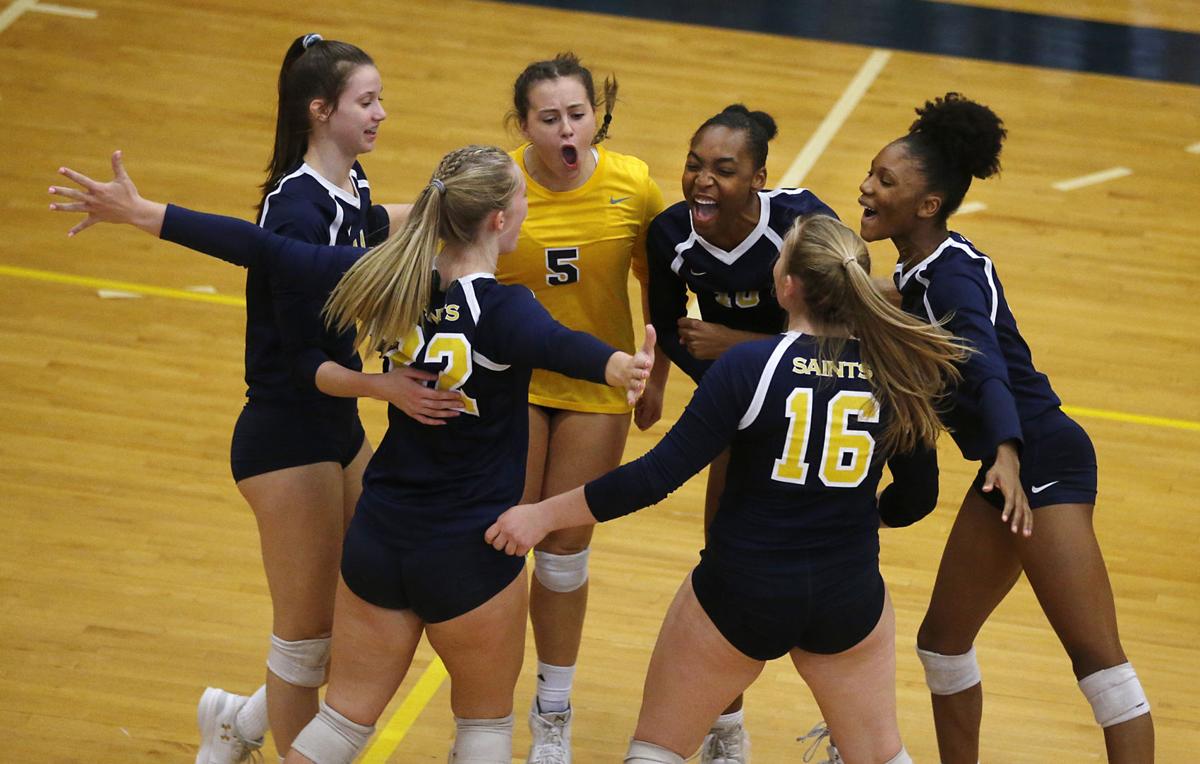 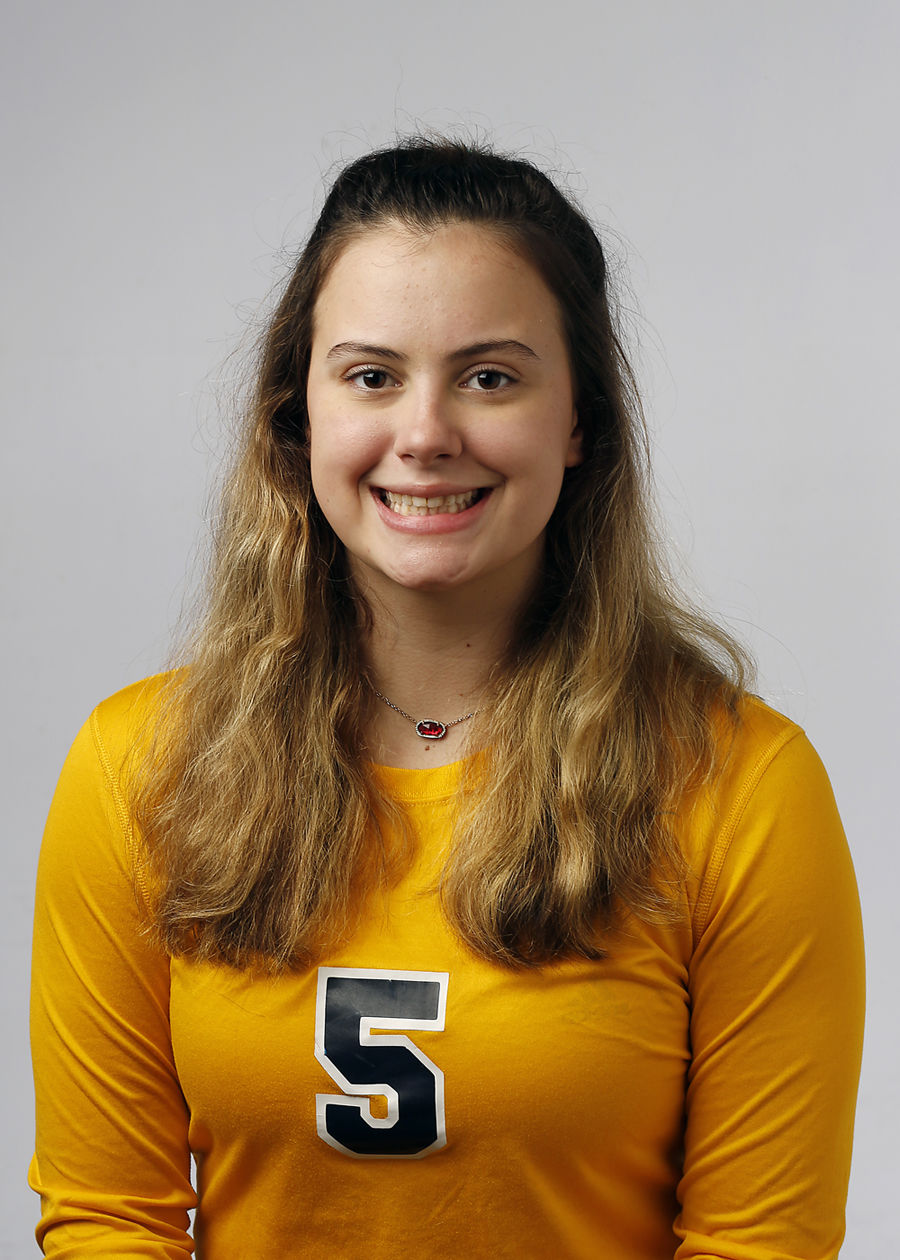 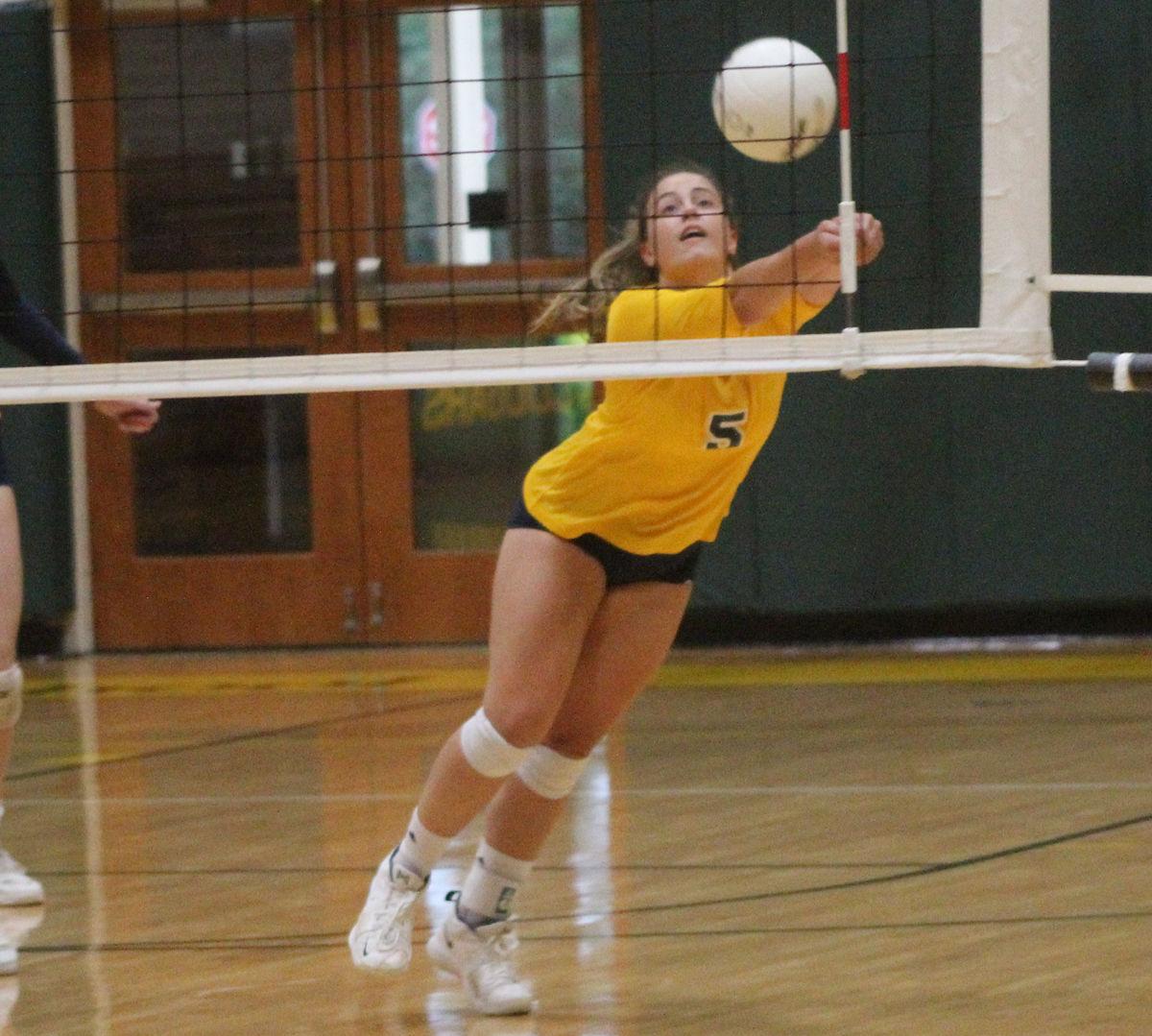 RICHMOND – To Claire Ellis, Madison Williamson was one of the best captains. She was really nice, and she was among the players who taught Ellis leadership on the St. Catherine’s volleyball team.

Ellis recalled Williamson telling her: You always say that you don’t want to be a leader because you don’t want people to look up to you. But I’ve looked up to you since you were a freshman.

“That really helped me in becoming a captain for two years,” Ellis said.

The skills, approaches and lessons she learned from her teammates and from her longtime coach and instructor Skip Weston helped the St. Catherine’s senior Libero from Goochland County deliver a storied high school career that saw her become the school’s all-time digs leader with over 1,400, and earn First Team All-Metro, All-State and All-LIS honors following the conclusion of the Saints volleyball team’s best season to date.

Ellis has been part of the Saints’ team ever since her 9th grade year – her first year at St. Catherine’s after she was at Salem Christian School in Goochland since she was at least 4 years old.

“Some of those girls, I had been together with since I was 3 or 4,” Ellis said of her former classmates at Salem Christian. “But coming here…everyone was so nice and so welcoming, I’ve just really enjoyed it.”

She started out playing Libero her freshman year, then shifted to defensive specialist, or middle back, with the team’s senior DS’s also getting to play at Libero. Towards the end of the season, she got put back into the shirt, and she’s played Libero ever since. Throughout Ellis’ first three seasons, the Saints put together banner campaigns – her freshman year, they made the state quarterfinals, and in both her sophomore and junior years, they reached the state semifinals – before going the furthest the program has ever gone this past fall: the state final.

Ellis helped her Saints get there – and she did so while playing through a fractured femur.

She confirmed the injury before the LIS tournament and learned that she had been playing with the fracture for a month. She doesn’t know exactly when it happened because she was having knee problems a little bit before that; they thought that it might had just been her meniscus or patella, but it was actually the femur where it connects to the knee, right behind the knee. Ellis said it also bruised the bone.

She played with padding around her knee, and she said that, while her doctor didn’t want her to keep playing, he realized she was playing her senior season – let alone going to states – so he said that she could play through it, but after the postseason, she’d have to take 10 weeks off. She’s dealt with pain at some points, but now that she’s taking time off, it’s not bad right now.

It also didn’t really hinder her play through her final LIS and VISAA tournaments.

“When the adrenaline’s going, it didn’t really affect me,” Ellis said. “Sometimes it would after – when I would ice it, I couldn’t bend it for a little while, but playing, it’s not bad.”

A diving force throughout the season, Ellis racked up 21 digs in the LIS final against Collegiate (3-0), 26 digs in the Saints’ state semifinals win over Bishop O’Connell and 15 digs in the state championship match. According to the Times-Dispatch, she had 378 digs to go along with 57 aces and 46 assists.

Ellis, who is set to play at Libero for Shepherd University in West Virginia, loves being defensive captain.

“I love defense – that’s my favorite part, is just digging,” she said. “It’s just kind of fun because their big hitter will come up and take a big swing and if you dig it, everyone’s like ‘Oh!’”

She began her volleyball journey around 5th grade; she saw that her sister was playing volleyball at her old school, so she came out and, as a 5th grader, would get her hand on the ball. The coach would pepper with her, and by her 6th grade year, he had let her onto the team, where she’d help in practicing with the players. It was also in 6th grade that Ellis played on her first travel team: 12 Metro at Richmond Volleyball Club.

Before that, she had been playing basketball and also danced, but she realized that physical contact sports weren’t for her. When she went to volleyball, she liked the team aspect of it, and how mentally tough you have to be, “because unlike most sports, you can be up 10 and then be down in a matter of a few minutes.”

Ellis figured she and her Saints would probably make it to the finals this year “because this is the best that our team has ever been in the history of St. Catherine’s.” The Saints assembled a 26-5 overall record, won the LIS tournament championship, went undefeated in regular season and LIS play and didn’t drop a set in their three-set-minimum matches (invitational matches are typically two sets minimum) until they defeated Bishop O’Connell 3-1 in the state semifinals.

“I knew that we had to do well because it was my last year and I was like: It’s the last time I’m going to be playing with a lot of these girls and we’re all gonna branch off, especially with my senior friends,” she said, noting how she and Jailah Channer came onto the team as the only two freshmen together, and how she played with fellow defensive standout Jessie Atkinson on her 12’s team.

And junior setter and All-Metro Player of the Year Quinn Menger, from nearby Powhatan County, has been a longtime teammate – and a friend for five years now. Ellis and Menger first played together on RVC’s 14u Nationals team before transferring to St. Catherine’s and becoming part of the volleyball team at the same time. They also played beach volleyball together before going to St. Catherine’s and have spent every day before school together.

“I’ve loved every year playing with her,” Ellis said. “She’s a setter and I’m a Libero and it’s kind of a neat little combination because I’m helping make her job easier. She’s always the more talkative one and I always love when she’s encouraging everybody – it’s really fun playing with her – and then I’m more of the quiet one, but I will be very competitive sometimes, and it’s really funny when we’re on opposite sides because we just go at it with each other.

“And if we’re on the same side, then we are going to beat whoever’s on the other side,” Ellis added with a laugh, “because we are so competitive.”

There were a lot of emotions and motivations behind wanting to win states, including going up against a perennial title contender in Flint Hill. And while the Saints ultimately finished as the state runners-up to the Huskies – who won their third straight state title and their 10th in the last 12 years – Ellis said that “it was actually nice to actually just take a set off them” in the 3-1 loss.

“I loved it, because it’s really good competition for us,” Ellis said of getting to challenge for the state championship. “And the states were just so much fun, because, before playing, you’re with your team, you’re in a hotel together, you get to bond, you’re making Tik Toks or videos…and then you’re in the bus, you’re singing songs all the way there. And then, when you get there, it’s like you’re getting up against this really big competition and you’re just using what you have done all year and just laying it out there on the court. And it’s really cool because that’s the first plaque for volleyball that we’ve ever brought back for states.”

Her team could rely on every one of its players who stepped onto the court. Most of the Saints’ starting lineup had played travel ball, which, Ellis pointed out, doesn’t happen a lot. With Ellis and Menger transferring in, Channer beginning her years with the team as a freshman just as Ellis did, Elise Williamson getting to play during Ellis’ sophomore year and Rian Sherod beginning varsity as an eighth grader, an incredibly talented core of players came together to lead the Saints.

Once they got that whole group going – in Ellis’ words, they were “just kind of unstoppable.”

“We knew what we wanted to do,” she said, “and then we brought in people like Campbell [Wood] and [Guinevere] Buono…which was really nice, and Bella [Lupica], our freshman middle, which she was put into a really hard spot this year, but she really worked through it. I’m really excited to see what happens after.”

Ellis said she was very fortunate to get onto the team her freshman year.

“I was really nervous to come in because I was new,” Ellis said. “But everyone was so nice and they really taught me leadership…so when they left, I would end up taking over.”

She also felt fortunate to have Skip Weston, with whom she had done private lessons at RVC since she was around 10 years old, as her head coach at St. Catherine’s. During lessons, he didn’t just limit her to Libero-related instruction – he let her hit in addition to setting, passing and serving.

“I really am grateful that he taught me how to hit, though, because I actually know how to hit now, so if ever need-be, I can do it,” she said.

Ellis added that Weston is “always looking out for your best interests.”

In continuing her volleyball career to the collegiate level, Ellis had a really tough decision this summer as she was looking at a few different schools. But when she went to the camps, Shepherd was the one that really made her feel like she was part of the team already.

“And they really went out of their way to make sure I was doing all right and always talking to me, and I really liked that aspect,” she said, “and the coach has always been so nice.”

To Ellis, it took the Saints a lot of time, effort and hard work to craft their best season yet.

“And then you have to come into the gym always wanting to get better,” she said. “We all had to come in like: This is what we want to do this year…we don’t want to drop a set in the LIS, we’re gonna win LIS for the eighth year in a row and we’re gonna make it to the states’ finals.

“That was our goal,” she said, “and we worked really hard to work up to that goal."