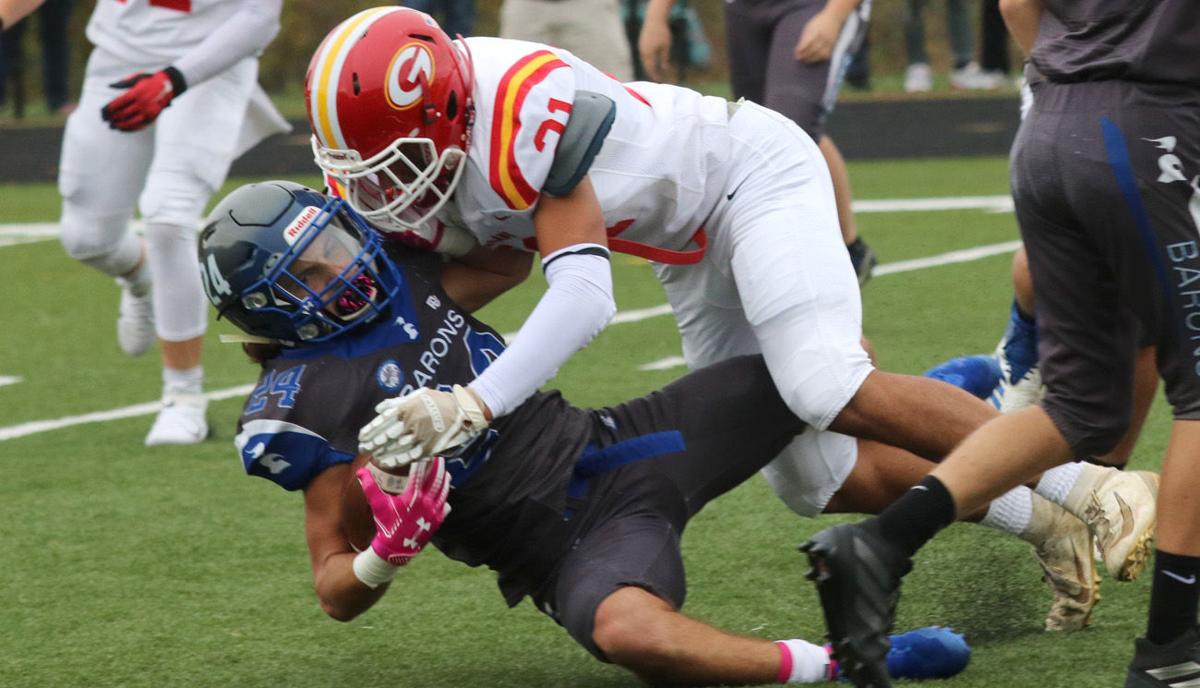 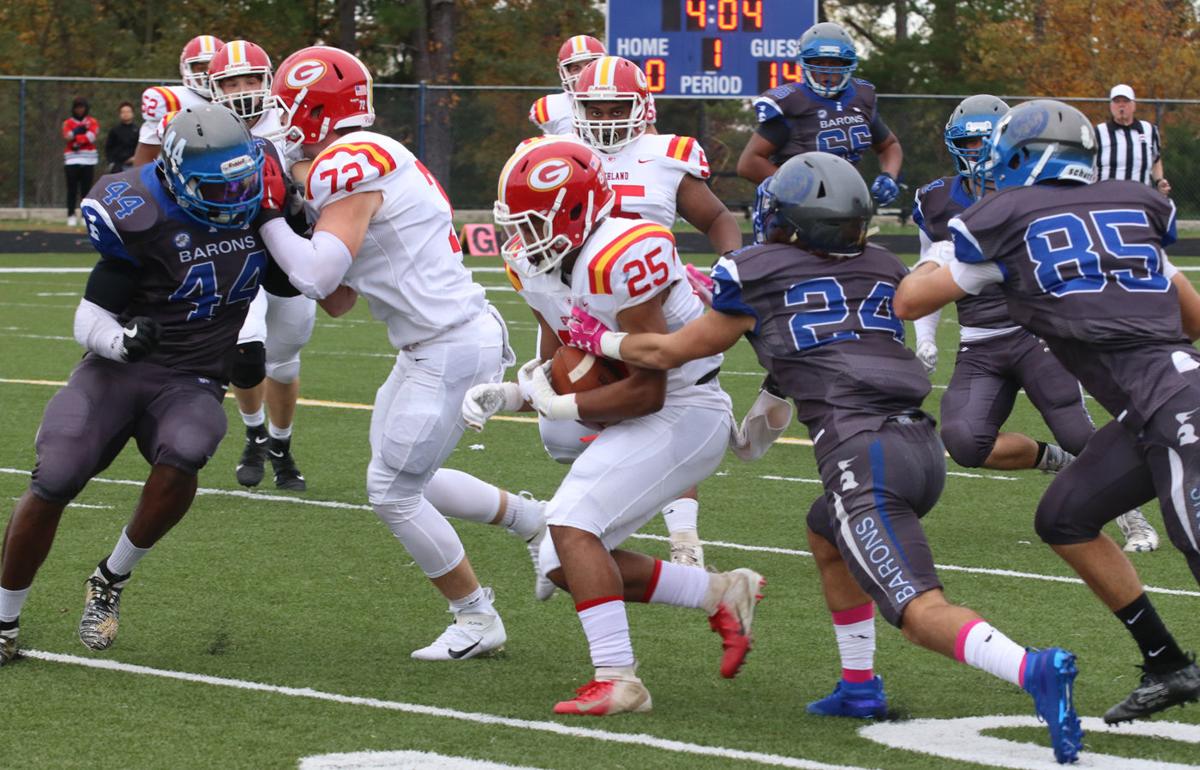 Dakhari Burgess (25) had three touchdowns in Goochland’s 53-0 win over Blue Ridge School last week. Above, he picks his way forward and breaks tackles in a first-half, first-down run.

Dakhari Burgess (25) had three touchdowns in Goochland’s 53-0 win over Blue Ridge School last week. Above, he picks his way forward and breaks tackles in a first-half, first-down run.

If your team is playing a late-October Saturday afternoon football game, there is probably no better setting than the campus of Blue Ridge School.

But that idyllic setting quickly turned into a pre-Halloween haunting for the hosting Barons as Goochland thumped Blue Ridge 53-0 this past weekend in St. George.

The Bulldogs didn’t deliver any tricks for the opponent’s Homecoming, but instead depended on a familiar recipe to shut down the Barons.

Strategic passing and an efficient running game coupled with a stifling defense that allowed the Barons less than 100 yards were more than enough to send the Bulldogs home with their seventh win of the season.

Dakhari Burgess opened the scoring for the Bulldogs, taking in his first of three touchdowns on a 14-yard run.

“Dakhari had a great day, but all the backs did well,” Goochland Football head coach Alex Fruth said after the win.

Following a Baron fumble, Devin McCray scored his first of two scores and the Bulldogs were up 14-0 early in the first period. He followed it up with a 54-yard score after taking a shuttle pass from quarterback CJ Towles, who was 5-for-5 passing, an aspect of an evolving Bulldog attack that could present problems for future opponents.

“At some point teams are going to have to respect our vertical passing game,” Fruth said, “and that will really help the run game.”

He added: “When we can make it hard for teams to put eight guys in the box, we will have a bunch more opportunities to take advantage of.”

The Bulldogs’ defense shut down a Blue Ridge offense that has produced big points this season. The coach said the defense’s take-no-prisoners attitude coupled with a short memory equates to a unit that is getting better each week.

“These guys are fun to watch!” Fruth said. “We keep getting more aggressive each week and don’t let bad plays hurt our mental game. They all have short memories and want to make the next play.”

The rare private/public school matchup was the result of a scheduling error in the Bulldogs’ traditional matchup with Fork Union, as well as Randolph-Macon Academy cancelling the remainder of its football program, leaving a hole in the schedule for both teams.

What some would consider a challenge in a late season road contest with an unfamiliar opponent, Fruth sees as an opportunity, calling it “good experience getting on a bus on a Saturday and having to play a game.

“We will have to do this at some point to get where we want to go,” the coach said.

The team’s philosophy is simple: “We act like it’s a business trip.”

Those buses will roll again this week as the Bulldogs - still ranked no. 1 in Region 3B ahead of no. 2 James Monroe (5-3) and no. 3 Brentsville District (5-3) - head to Central for a James River District matchup with the Chargers on Friday, Nov. 1 at 7 p.m. Fruth knows that, at this point in the season, nothing comes easy and each win requires total effort from his squad.

“Central is a team playing really good football right now,” Fruth said. “They go in and out of their traditional double wing, getting into some spread looks.”

That vaunted Bulldogs’ defense will again face an offense capable of putting big points on the scoreboard.

“They score points in bunches, averaging way over 30 points per game,” Fruth said. “Should be a good physical test for our team.”