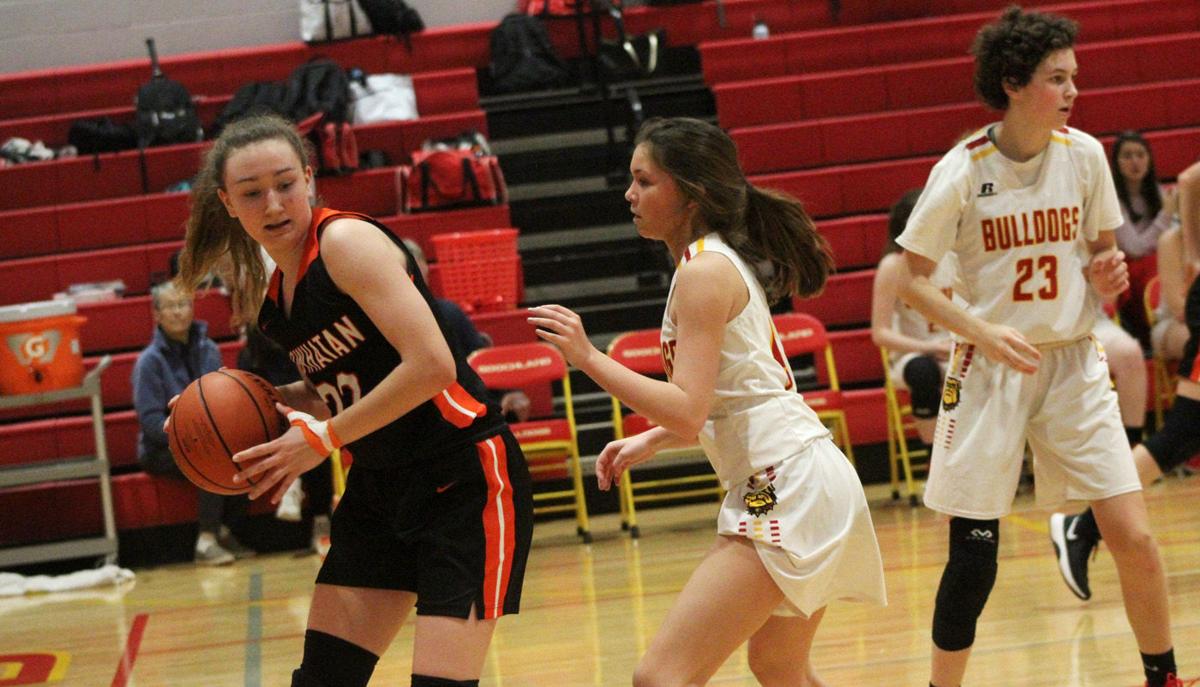 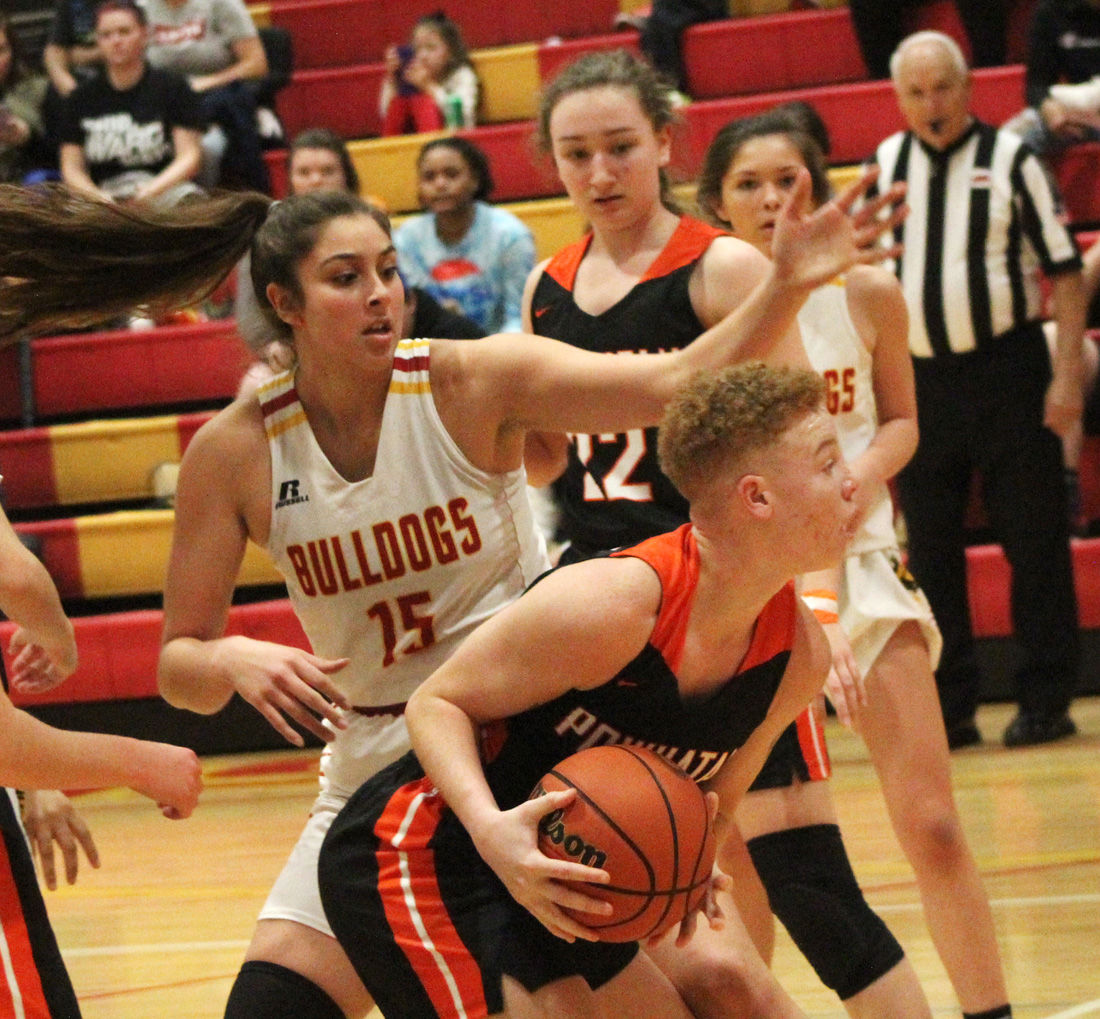 Powhatan's Michala Taylor (foreground) secures the ball on the offensive end before netting the layup against pressure from Goochland's Victoria Lopez (15).

Powhatan's Michala Taylor (foreground) secures the ball on the offensive end before netting the layup against pressure from Goochland's Victoria Lopez (15).

GOOCHLAND – Teammates Faith Henderson and Sophie Dolan both double-doubled, Kayla Terry joined them in netting double figures and Powhatan girls basketball closed out the regular season on a strong note, following up yesterday’s 54-37 victory over Class 4 opponent Lee-Davis with tonight’s 63-49 triumph over Goochland.

The Indians secured a season sweep of the neighboring Bulldogs with Wednesday’s win. The gains they made since the first time the two teams met could be seen in the command they were able to establish in the game's middle stages against a unit that two months ago challenged Powhatan for the win in the final seconds of regulation.

“We’ve made a big improvement from December to now,” Powhatan head coach Kristy Henderson said after the game. “We have grown, we have found our roles on the team and we’re playing very well together as a team.”

Faith, a sophomore, shot 8 for 13 from the field and a perfect 9 for 9 from the free throw line. She scored 10 of her 26 game-leading points in the first quarter with three buckets off of drives to the net, one off of a putback in the paint and one off of a jumper on a clear look that she secured when she stepped quickly to her right to get free of a defender. Faith also had 13 rebounds, five assists and two steals.

Powhatan’s early success with its inside game paved the way for opportunities and shots on the outside. Faith twice got the ball inside, then was able to kick it out to Dolan, who dropped in two of her three 3-pointers that way. Dolan was 3 for 5 in shooting from behind the arc, hauled in 10 rebounds including three offensive boards and added an assist, a steal and a block. She scored 13 points overall.

After Goochland cut Powhatan’s lead down to 3 points on a 3-pointer from Kenley Warren and a jumper from Jalyn Burns early in the second quarter, Terry, a sophomore, sparked a 10-0 run that would cement the momentum in Powhatan’s favor when she knocked down a triple on a shot down the middle. Terry would bookend that run with her second 3 of the game, and she’d end up scoring 11 of her 12 points in the second quarter alone.

“When you’re a shooter, and you miss the first couple – she didn’t get down on herself, she continued to keep shooting and then she hit those two 3s,” coach Kristy Henderson said of Terry, “and that was a boost for us.”

Versatile senior Michala Taylor bolstered her team with well-rounded play as she shot 3 for 3 from the field for 6 of her 7 points, brought down five rebounds and chipped in three assists and a pair of steals.

“Michala, unsung hero at times, doesn’t get the points but gets the rebounds, plays the defense, is quick in the post, boxing out,” Henderson said. “She played really well.”

Powhatan (10-12) halted Goochland’s (14-6) win streak at eight straight games. Junior Gabby Ragone showcased her speed for the Bulldogs as she turned four steals into fastbreaks for 8 of her 18 team-leading points. Jalyn Burns also ended the night with 16 points. But the Bulldogs struggled at the net early on, and Henderson praised her Indians’ 2-3 defense.

“I feel like we didn’t box out as well in the first quarter, but adjusted as the game went on, and everybody was boxing out, guards included,” Henderson said.

Every one of Powhatan’s players got to play in Tuesday night’s win over Lee-Davis, and the Indians were dialed into the press. Faith led the way with 14 points, and Terry knocked down three triples in her 13-point night. As of tonight, Powhatan is seeded third in Class 4, Region B South.

Despite the loss, Goochland (14-6) wrapped up a tremendous regular season that saw the unit go unbeaten in the James River District. The Bulldogs have earned the no. 1 seed for the James River District girls basketball tournament and will make the district semifinals (Friday at 7:30 p.m. versus Buckingham) their Senior Night game.