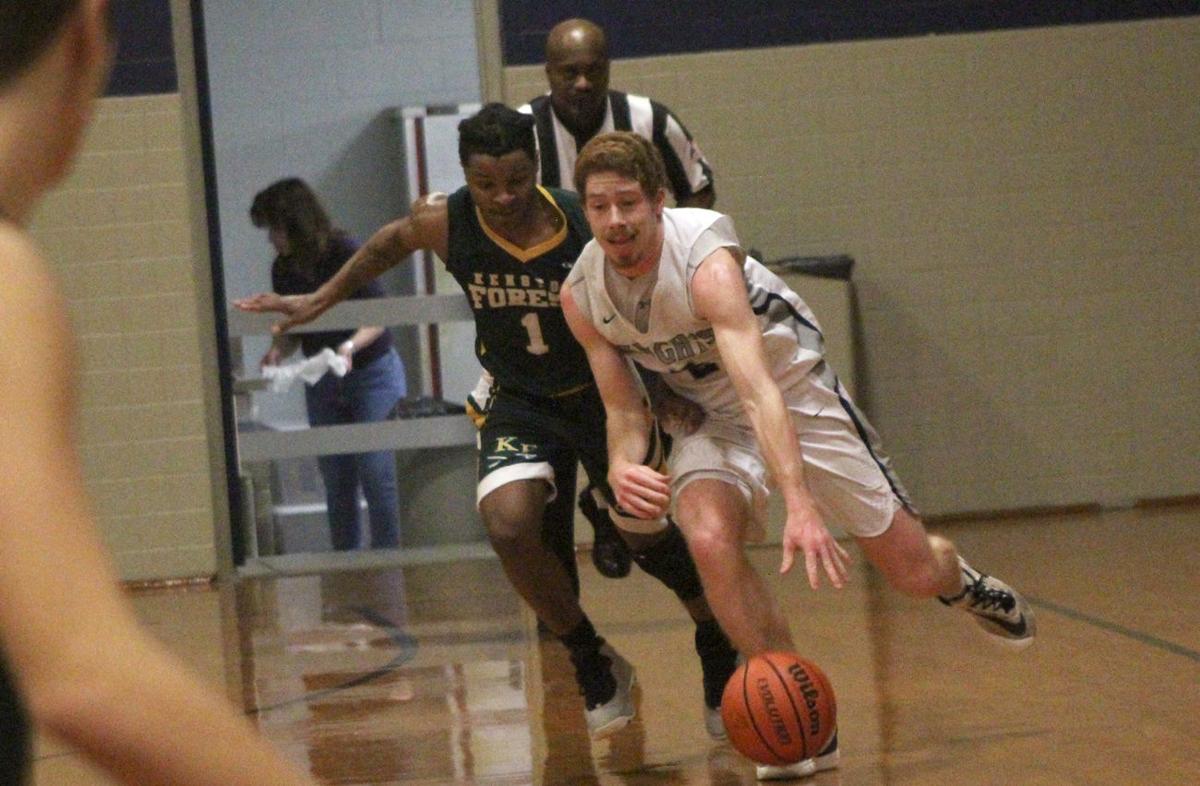 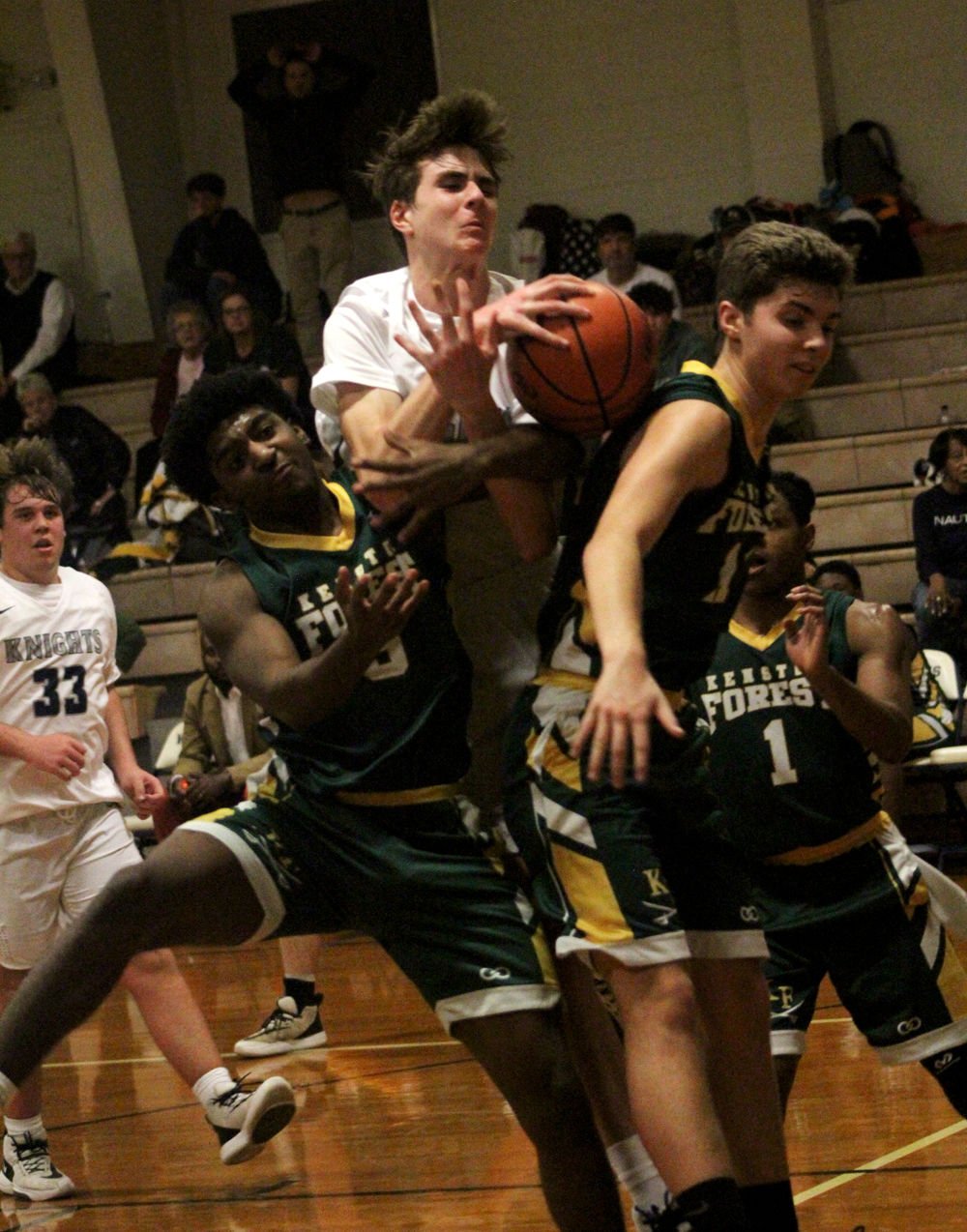 But when he did, it turned the tide.

Moments after knocking down three points from behind the upper-right arc to tighten visiting Kenston Forest’s lead over his Blessed Sacrament Huguenot Knights to 44-42, the senior received an inbound pass, dribbled a few steps forward, took the shot with two defenders near him, and watched as the ball smacked off of the backboard…

…and angled almost straight down and through the hoop, tying the game at 44-all as the period-ending buzzer sounded.

“I’d like to pretend that I meant to bank it," Avery said of the wild basket, "but that wasn’t the intention – but it really helped get it going for me. First half to second half, it was a big turnaround – that shot had a lot to do with it.”

When the fourth quarter commenced, Avery went for three from the corner, but watched his shot bounce off the rim…

…and into the reaching hands of sophomore teammate Zander Nadeau, who spun away from pressure and then sent the ball up and through the hoop for the putback, propelling his Knights back into the lead for the first time since the second quarter.

Nadeau poured-in a whopping 35 points overall, Avery unleashed an incendiary 18-point fourth quarter to finish the game with 23 and the BSH Knights, helped immensely by their 22-0 run started by Avery’s 3-pointer late in the third, denied Kenston Forest 79-61.

“It was a huge win for us,” BSH head coach Chris Hamner said after the game. “It was really big because so many guys contributed.”

Before Avery began pouring-in the baskets, his teammate Michael Timmons flicked-in a high-arching 3-pointer near the top of the third quarter, and later in the fourth – after Avery and Nadeau combined for the first 10 points in the team's scorching run of points – Henry Kiefer extended his arm from behind the arc and watched the ball he just launched swish through the basket, sparking the home fans into an ecstatic roar and prompting the Kavaliers to call a timeout with the Knights having swung from going down 44-39 to leading 52-44. Nadeau and Avery continued the rest of the scoring damage in the 22-0 run.

“Once we get a little bit of momentum, we can do a lot of great things,” Avery said.

The Knights also received a keynote defensive performance from Chase Musselman, who crashed the boards for 11 rebounds. Hamner noted he’s been averaging 3 boards per game.

“He played unreal for us defensively,” Hamner said of Musselman.

Robbie Kurtz, who along with Avery and Nadeau has been one of the Knights’ leading scorers in the early portion of the season, dished-out 13 points, including 11 in the first half. But he got into foul trouble around the third quarter.

“That hasn’t happened yet this year to us, so I was kind of curious to how we were gonna respond, and guys stepped up,” Hamner said. “Guys off the bench held the fort down...Raymond played a huge second half…he came out like the Raymond of old.”

Players like senior multisport standout James Hawkins played a lot more minutes than they usually do, but Hamner said that “you would’ve never even known it.”

Avery added his second 3-pointer and shot 7-for-7 from the free-throw line in the fourth quarter.

And Nadeau, in the words of Hamner, “played unreal” as he high-pointed rebounds at both ends of the floor and remained consistent on offense from start to finish.

“That was kind of the Zander that we saw last year on JV a lot; we were waiting for it to transfer to varsity minutes,” Hamner said, “and finally it did…he played like an animal.”

For Nadeau, the key to his 35-point night was “just hustling – just always going for the ball, shooting as many shots as you can, hoping they go down.”

“We knew he was capable of doing that; it just took him getting the looks and hitting shots,” Avery said. “We’ve just been waiting for it. We knew it was coming.”

Trey Lewis, who netted 8 points in a 10-0 run that vaulted the Kavaliers into a 27-24 lead at halftime, finished the night with 31 points.

After BSH (6-3) endured a three-game slide to Brunswick Academy (54-40), Millwood (52-42) and Banner Christian (89-56), Avery said the biggest thing that the team can take away from Tuesday’s streak-halting win over Kenston Forest is the defense that it brought to the hardwood.

“We’ve been really struggling on defense the past couple games,” Avery said, “and being able to shut their drives down and then…run them off the line a little bit, that’s part of that momentum we’ll be able to take into the games coming up.”