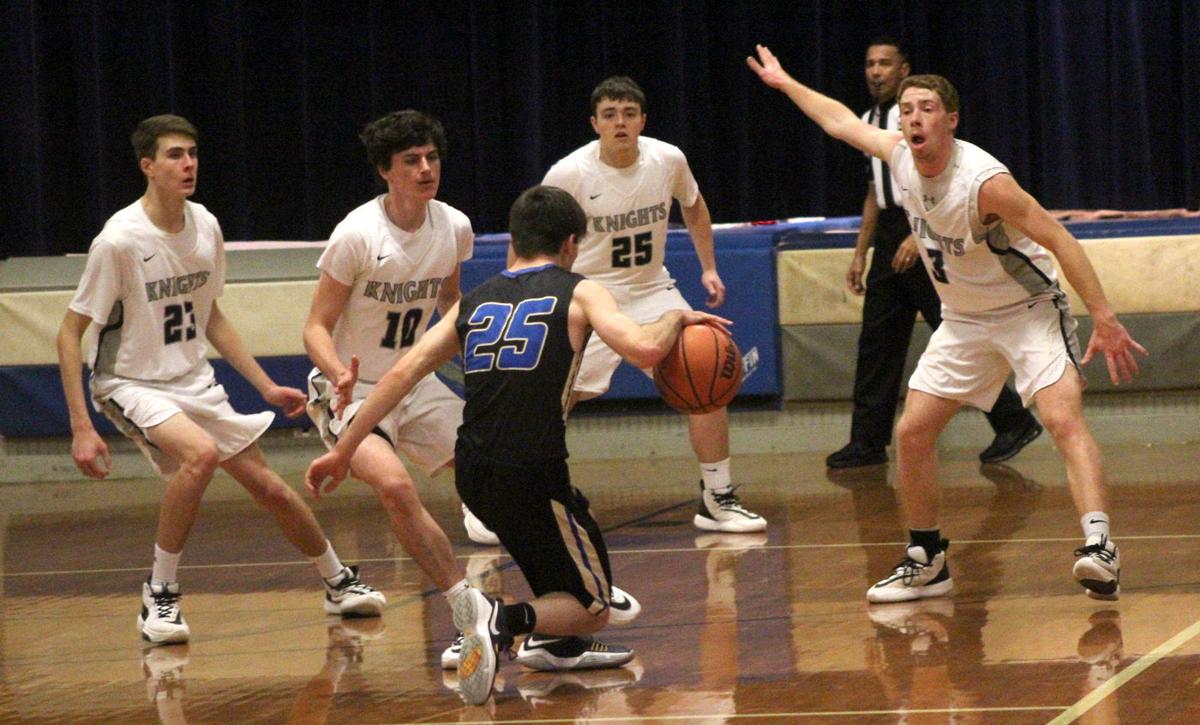 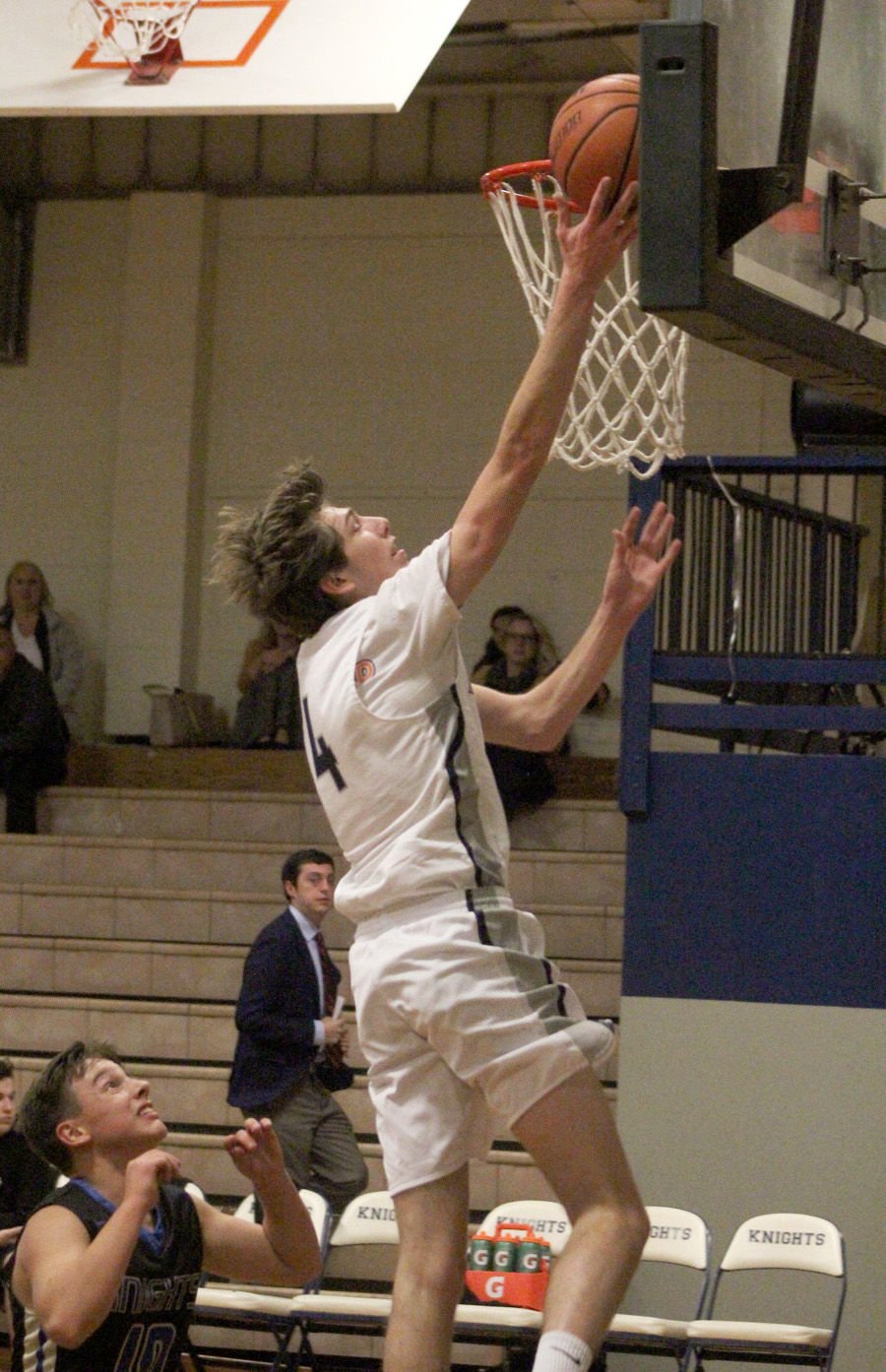 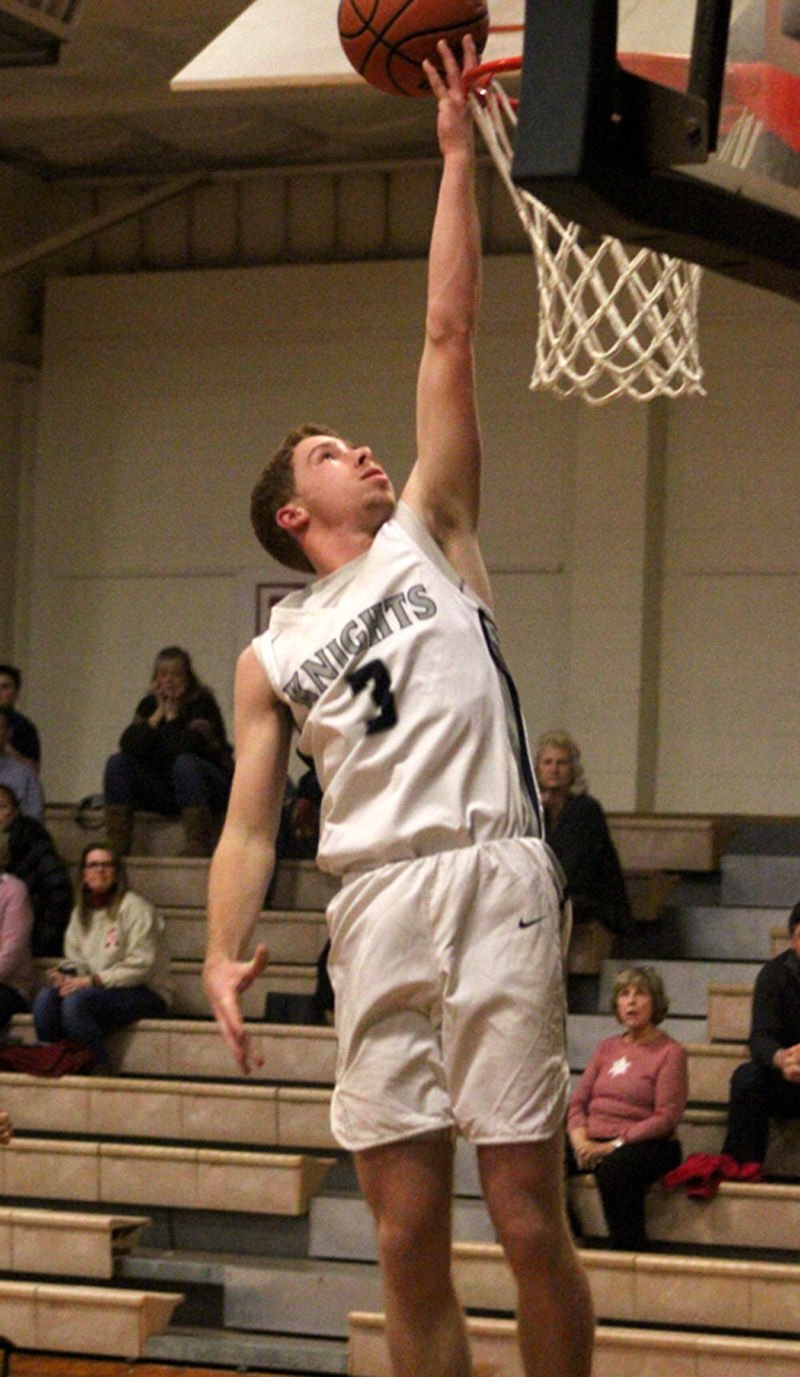 POWHATAN – The work that Robbie Kurtz and Raymond Avery put into preparing for the new season could be seen in their statlines as they helped set a commanding tone on opening night. The two seniors combined for 40 points in three quarters and 23 rebounds to lead the Blessed Sacrament Huguenot Knights past a young Guardian Christian Academy unit in dominant fashion, 71-26.

“Being a senior-led team is how we’re gonna win games this year,” said BSH head boys basketball coach Chris Hamner. “We might be out-matched, we might not have the talent that some other teams in our league do, but hopefully that experience is gonna carry us through some close games where we can upset some people.”

Kurtz and Avery, who both did the heavy-lifting on offense last season, were the Knights’ top scoring leaders on Tuesday with 23 and 17 points, respectively. And there’s potential for higher totals, as both seniors left some points on the floor.

“They both can shoot it a lot better than they did tonight, but they play hard and they lead and they get to the rim and they know how to attack,” Hamner said of Kurtz and Avery. “I’m just blessed to be coaching them this year to be honest.”

Kurtz also double-doubled with 14 rebounds, and Avery added 9. Both players took back possession on steals, and Kurtz set up one of his own two-pointers on a block. They were the Knights’ sole scorers in an 18-11 first quarter that saw Kurtz rack up 14 points in the stanza and help break a 10-10 tie by helping convert five defensive hauls into an 8-0 run. He pulled down two boards after Avery rebounded a BSH teammate’s missed free throw, then cashed in the second board for the go-ahead bucket while drawing the and-one try.

Kurtz in the 8-0 run twice converted steals into quick trips to the basket, and one of his defensive rebounds ended with Avery sinking two points on the other end of the court.

“I thought if their shots weren’t dropping, it might affect the rest of their game – I think that’s happened to them in years past – and tonight that didn’t happen,” Hamner said of Kurtz and Avery. “They weren’t making shots and that didn’t really affect them. They just started driving it, they kept rebounding, they kept playing our defense, which was good to see.”

And the two Knights were far from alone. Last year the team didn’t have another player who could consistently join the duo in going for double-digit points. But in his first game moving up to the varsity level, sophomore Zander Nadeau – who averaged 25 points on JV – had no problem finding the basket. He tapped into a rhythm in the second quarter and ended the night with 15 points while also rebounding well throughout the contest.

Henry Kiefer also enjoyed a strong start, totaling 8 points on the evening. He parlayed a steal into two points from the line after he was forced out of bounds on the run-back, and he sliced a lasering three-pointer through the hoop on the assist from James Hawkins. Michael Timmons and Carson Conner each knocked down one shot from behind the arc, and the Knights, who got to play their subs throughout the fourth quarter, held the visitors to 6 second-half points.

“Defensively we guarded really well; we made them shoot tough shots,” Hamner said, while adding of the young visitors: “As lopsided as the score was, they played hard. They made us stay after it defensively.”

In addition to playing experience, Hamner praised the team chemistry on his Knights “where everybody likes each other.”

“Everybody kind of knows everybody…they’re all friends with each other on the court and off the court,” he said. “It’s kind of nice to be able to coach guys where everybody’s just worried about the team…I don’t have to worry about any individuals wanting to score…I definitely am blessed to have 13 guys that care about how the team is going to do.”

The Knights play at Millwood on Wednesday, Dec. 4, either at 6:30 p.m or after Blessed Sacrament Huguenot Girls Basketball's game at Millwood, which starts at 5 p.m.