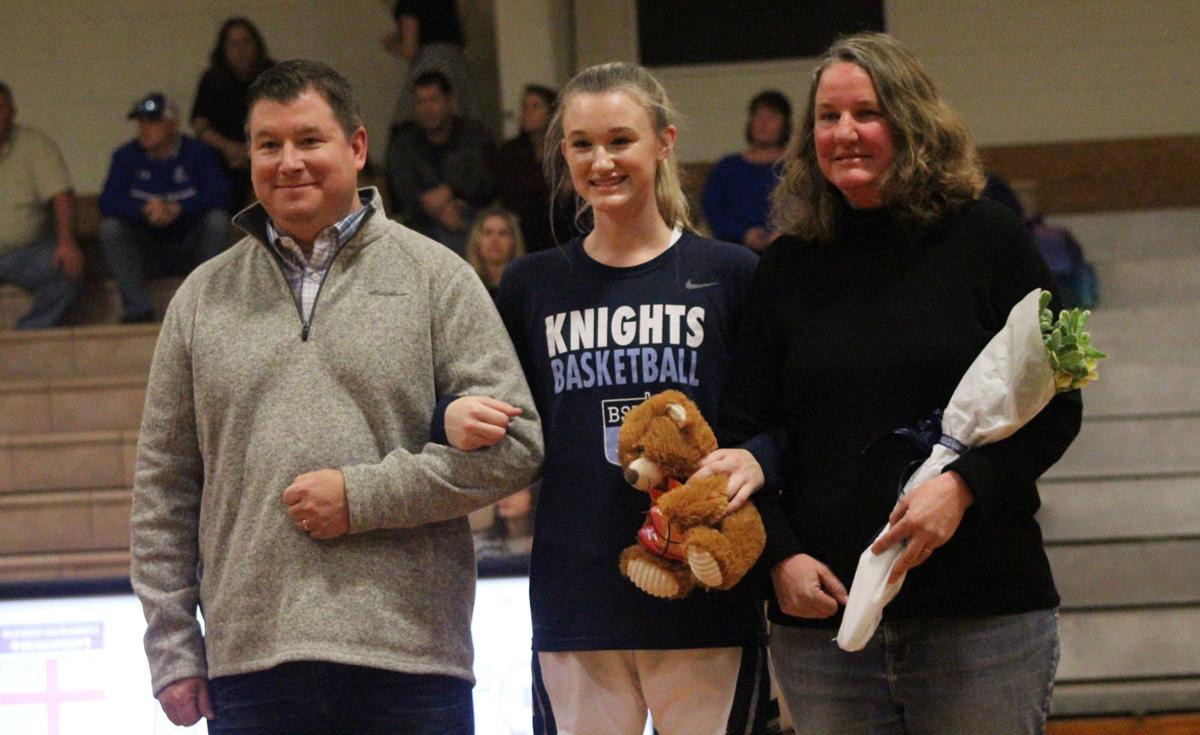 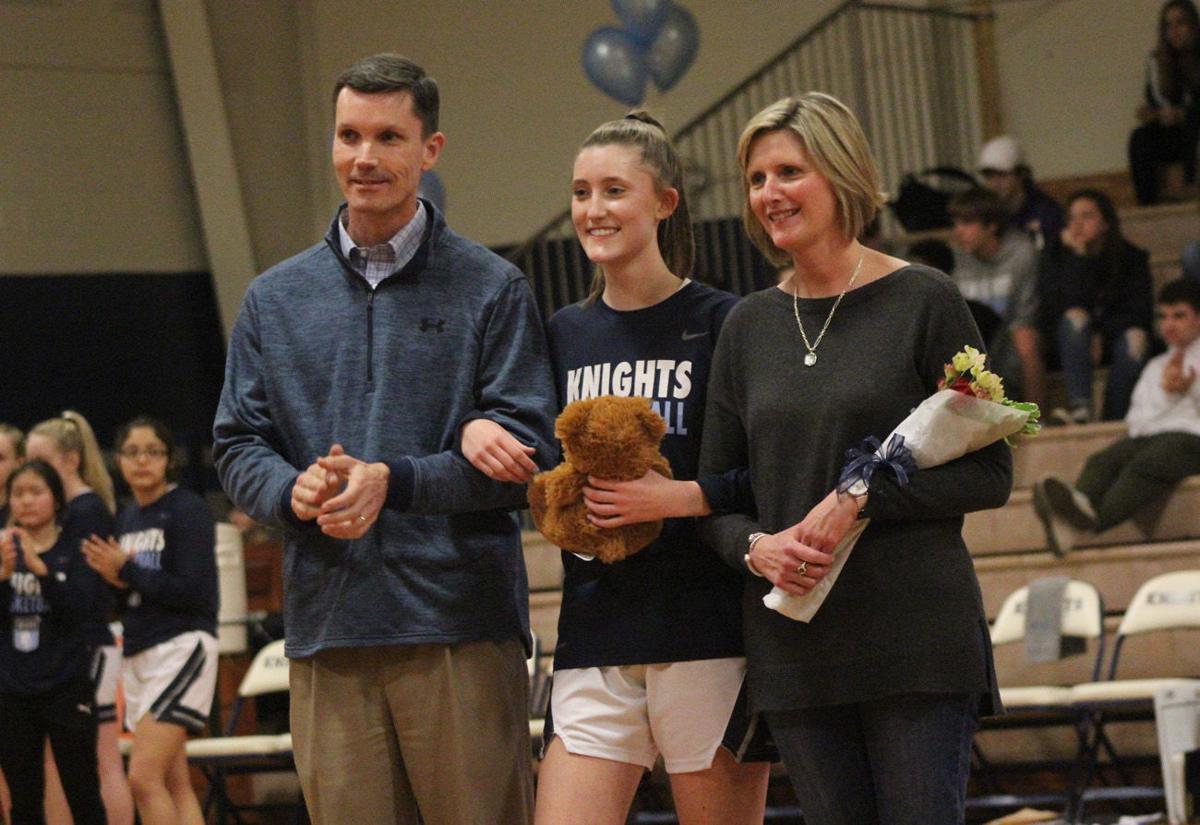 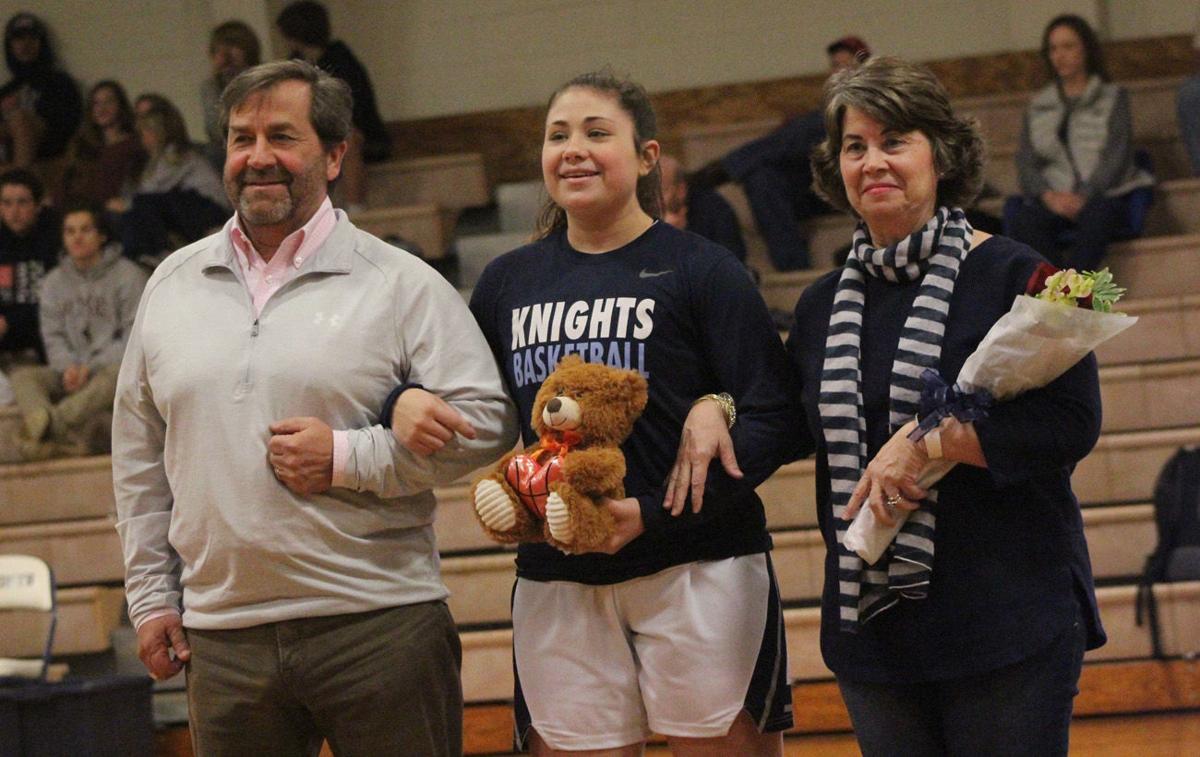 After sharing the basketball court as teammates for 11 years, the three Blessed Sacrament Huguenot Knights got to share it for one more regular season home game as they were honored on Senior Night.

When the ceremony concluded and McMinn faced her opponent for the tip-off, one more goal remained to be achieved that night: beat Southampton Academy.

And with the help of the three seniors’ leadership, 24 combined points from Madelyn Mitchell and Hailey Holcombe and a relentless defense, the Knights did exactly that, fending off the Raiders 35-27.

“It was so much fun,” Carter said, “and to go out with such a big win, that was awesome.”

“Senior Night definitely brought the intensity,” Schiefer said, pointing to the support from the Knights’ home crowd and high-energy student section. “To have this win puts us in a great spot for the tournament and…having our few losses that we did and the troubles that we went through as a team really built us up I think and that has allowed us to come to [the] point that we are at, and I think we can only go up from here.”

All three seniors contributed to the Knights’ defensive efforts; Carter brought down four rebounds, had three steals and limited one of the Raiders’ leading scorers to single-digit points throughout the game, Schiefer added two steals and two rebounds and McMinn hauled in seven rebounds and one steal and delivered a block.

“We like to turn our defense into offense, get our stops and push the ball, work it and find the open shot,” Schiefer said.

Carter also netted 7 points and flexed her speed in the second half with two successful drives to the basket for layups. She added two assists.

Schiefer scored 4 points and bookended a key 6-0 run for the Knights in the third quarter when she shook off a defender with a quick step to the side to net a jumper on the clear shot. She also had two assists.

Mitchell scored a game-high 15 points and nearly double-doubled as she secured nine rebounds. She added two assists. Holcombe netted a pair of 3-pointers and totaled 9 points.

The Knights raced out to a 7-0 game-opening lead as Carter and Mitchell netted the first 4 points on buckets down low and Hailey Holcombe nailed a shot for 3. Towards the end of the first quarter and throughout the second, the Knights, leading by multiple possessions, slowed down the pace on offense, working the game clock as the players passed the ball back and forth, trying to create open shots.

“That definitely helps us because we sometimes get a little fast, and so it helps us to kind of check ourselves back in, slow down and get the game back under our pace and where we’re comfortable,” Carter said.

Initially, the opposing Raiders appeared to be the biggest benefactor of the strategy as they were able to secure multiple steals, rebound the opponents’ missed shots and outscore the home team 10-4 in the second quarter cut the Knights’ lead to 18-14 at the half.

But in the long run, Carter noted how they were able to get better shots off, hit those better shots, not feel rushed and give their post players more time to be able to rebound.

And when the third quarter opened, the Knights were able to unleash a 6-0 burst, which ultimately helped them in taking a 6-point lead into the final 8 minutes of regulation. From there, steadfast team rebounding, a quick drive to the basket from Carter and points from the free throw line helped BSH retain control of the game.

The playoffs are up next for BSH. But from here, no matter the outcome, Carter, McMinn and Schiefer will get to end their high school careers having helped their Knights achieve a winning season on a 12-6 record in the regular stretch.

“You couldn’t ask for anything better,” McMinn said. “This year has been the best in our four years.”

“It’s definitely picture-perfect for us,” Schiefer said. “We’ve just got to continue and make our picture even more perfect…in the tournament. Just to have everyone and their support, it’s just really been special and definitely something we’ll never forget.”

Their leader throughout their banner season has been head coach Phil Villiott, currently in his first year at the helm of the Knights.

“He’s awesome. We’ve enjoyed every minute of playing for him. He’s an awesome coach,” Carter said of Villiott. “He knows the game really, really well, he knows how to control us and set us up so we will succeed and he’s good at reeling us back in if we get frustrated or we get down on ourselves. He’s really awesome.”