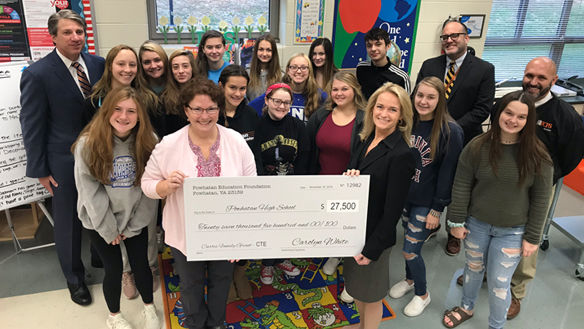 CTE teacher Jane Brown and Early Childhood Education & Services students hold a check representing the funds Bob and Karla Curtis donated to the division’s CTE programs. Carolyn White, front right, presented the checks to the schools and programs on behalf of the couple on Nov. 18. 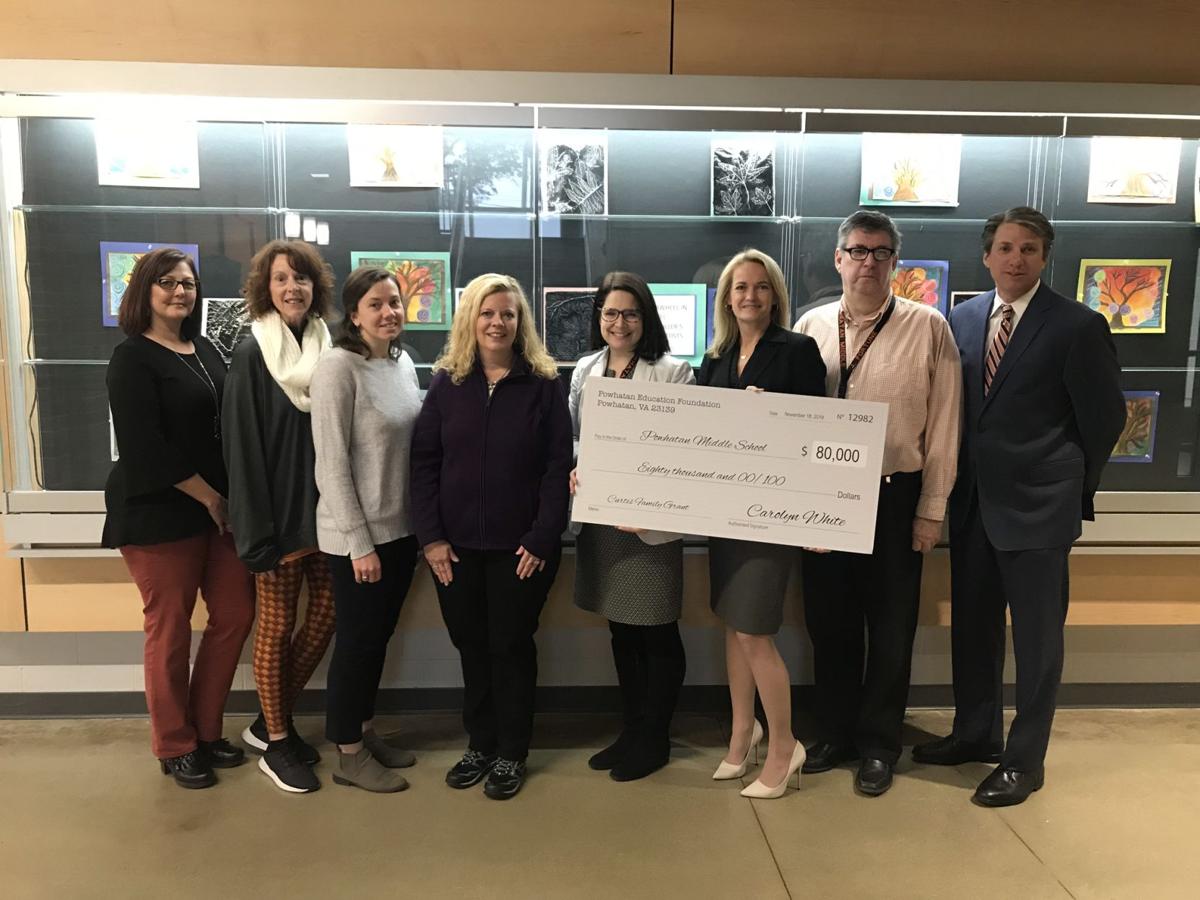 Powhatan Middle School staff holds a check representing the funds Bob and Karla Curtis donated to the division’s CTE programs. Carolyn White, front right, presented the checks to the schools and programs on behalf of the couple on Nov. 18.

CTE teacher Jane Brown and Early Childhood Education & Services students hold a check representing the funds Bob and Karla Curtis donated to the division’s CTE programs. Carolyn White, front right, presented the checks to the schools and programs on behalf of the couple on Nov. 18.

Powhatan Middle School staff holds a check representing the funds Bob and Karla Curtis donated to the division’s CTE programs. Carolyn White, front right, presented the checks to the schools and programs on behalf of the couple on Nov. 18.

POWHATAN – They never doubted it was coming, but it’s nice to have the checks in hand. And if the checks happen to be a few feet long, that’s fun, too.

Early on the morning of Monday, Nov. 18, Dr. Eric Jones, superintendent, and Carolyn White, president of the Powhatan Education Foundation, made the rounds of the local schools to deliver on a promise made back on Aug. 26 by Bob and Karla Curtis.

At that time, Karla Curtis visited all five schools to personally announce that she and her husband, Bob Curtis, founder and co-CEO of PIEtech, would be reinvesting a piece of the roughly $500 million they made from the sale of their company to Envestnet earlier this year into the local school system.

The capstone of the gift was a commitment to give every teacher and counselor in the school district $1,000 to spend on their classrooms and students. The couple also pledged to set up a $25,000 scholarship fund for Powhatan High School and give an additional $45,000 grant to be split between the school district’s music, career and technical education (CTE), and science, technology, engineering, and math (STEM) programs. The couple is partnering with the Powhatan Education Foundation (PEF) to administer the Curtis Donor Advised Fund, which includes the three distinct funds.

When PIEtech was sold, a portion of the payment to shareholders was in cash and another part in restricted Envestnet stock that couldn’t be sold for six months, Karla Curtis shared. With that waiting period up on Nov. 1, they used Envestnet stock to fund the donor advised fund, which allowed them to move forward on paying out all of the grant money except the scholarships that are coming later in the year.

White said the couple was adamant that the scholarships be used to enable students to attend school when they otherwise wouldn’t be able to attend. They are still working on the guidelines on how they will be awarded.

Curtis pointed out that there are some teachers and counselors who work part-time, so those staff grants were adjusted based on how many hours they work.

Dr. Mike Massa, PHS principal, said he knows some teachers had begun to look at different devices or programs that could enhance instruction in their classrooms or were researching training opportunities. With the funds now in place, he expected to start seeing requests for reimbursement and proposals from teachers about their plans for the money.

“All I hear is excitement and creativity from our teachers of the best way to utilize the funds so it directly affects student learning,” Massa said. “The one theme that I have heard from teachers is that they are excited and they are appreciative, but they also are making sure the funds get the best bang for the buck in terms of ways in which it can enhance instruction and learning for our students.”

Dr. Jason Tibbs, CTE director, said the high school initially requested a milling machine to be used by the agriculture and engineering programs. However, the couple consulted a professional friend who told them they should instead buy a plasma cutter to be more in line with current industry standards.

“We were aware of a plasma cutter and one of the staff members had mentioned a plasma cutter to me at one time, but it was very cost prohibitive for us within our operating budget to be able to purchase one of those. So, we went for a much simpler option, which would have been a milling machine,” Tibbs said. “When they came back to us and said we would rather you get a plasma cutter … we were elated.”

Jones said the checks were received on Nov. 18 and available at that point to the teachers. The staff members who receive the grants can spend their grant monies on instructional materials, class field trips, conference/travel, technology, furniture and equipment, direct student support, or equipment or supplies to help students with disabilities.

“Teachers have begun planning what they are going to purchase. Some of them have already purchased things with their own funds and will be looking to get reimbursement. The impact has already been felt, but now that the money is actually here and teachers can begin purchasing, I know they’ve got lots of ideas,” Jones said. “It is going to be an onslaught of lots of great things happening in our classrooms and for our students as a result.”

During the Powhatan County School Board’s Nov. 12 meeting, White handed out $29,290.60 in Innovative Classroom Grants provided by the Powhatan Education Foundation. To be back a week later helping present the Curtis checks was heartwarming and rewarding, she said, because of the impact she knows they will all have on the schools and the community as a whole.

“It’s going to touch every household in the county, and that’s what we were hoping to do with the Powhatan Education Foundation is help broaden the reach of the teachers in the schools. Bob and Karla Curtis have made that possible,” she said.