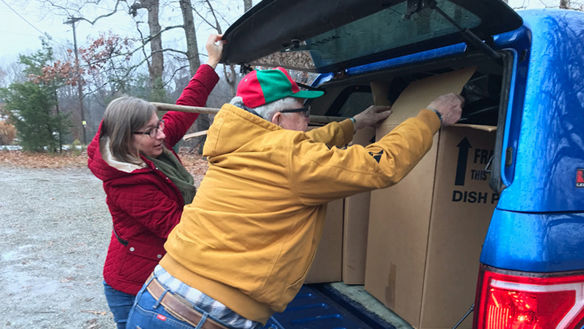 Elwood Yates Jr. unloads presents with the help of Dawn Stiller, who joined the ridealong. 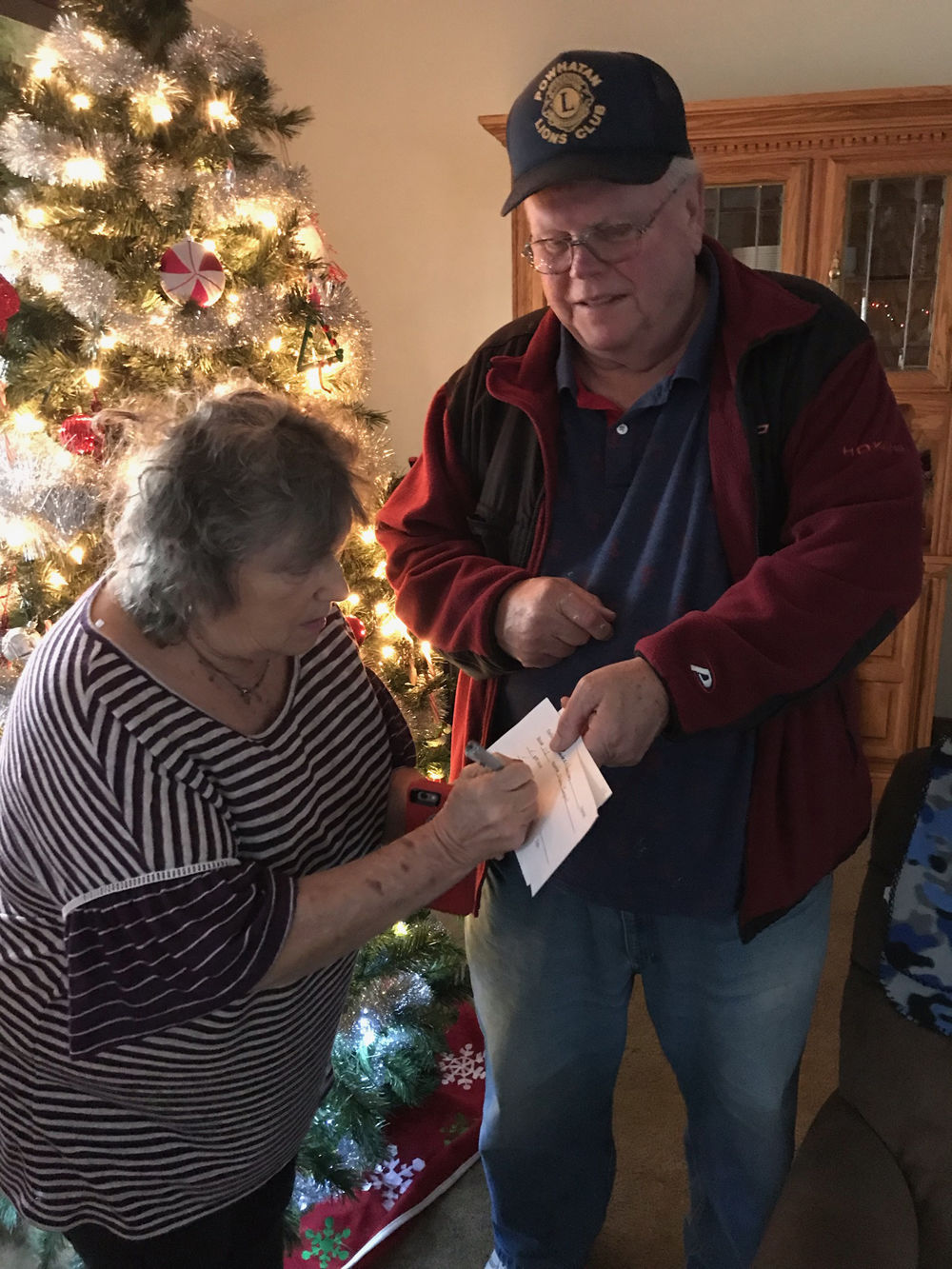 Roy Harrison delivers presents to the mother of a recipient on Dec. 13.

Elwood Yates Jr. unloads presents with the help of Dawn Stiller, who joined the ridealong.

Roy Harrison delivers presents to the mother of a recipient on Dec. 13.

“You made it on time this year,” Elwood Yates Jr. greeted me with a chuckle as I walked up to him in the Powhatan Christmas Mother headquarters.

In 2018, which was my third year riding around with Elwood and Roy Harrison delivering presents for the Christmas Mother program, I was a few minutes late. I had called ahead to let them know so they wouldn’t leave me and we hit the road as soon as I arrived. The ride is one of my annual traditions, both because of the company and some great stories about Powhatan County, so I didn’t want to miss it. So, yes, I admit I was late.

That is why, when I showed up for the ridealong on Dec. 13, 2019, I made sure to be early. All of the people there to deliver presents and the members of the Christmas Everyday Committee gathered in the headquarters were in a good mood despite the yucky weather.

They listened to a word from Elmore Cook, who coordinates the delivery drivers each year, and the 2019 Powhatan Christmas Mother, Betsy Blandford, who was so grateful for the service of the 16 teams of volunteers who carried the last of the packages to their recipients.

“When people ask me how we do this, I say three days people come and pick things up and the fourth day, Elmore and his merry band of elves go out in the community,” she said.

Joining us this year was Dawn Stiller, Christmas Mother treasurer, and apparently a fan of this particular column each year. She said she read the first one and wanted to “get in on that and hear some of those stories.” So, with our packages loaded and our customary selfie taken, we set off toward our deliveries in northwest Powhatan.

Heading down Anderson Highway, we turned left at Trenholm Road. Elwood was a little quiet at the start of the trip, so it was actually Roy who pointed out Mosby Tavern, named after the Mosby family. The building, which still stands today in the same place, was originally in Goochland County before it was divided, then Cumberland County, and finally Powhatan County when it formed in 1777. It was a major staging area for Continental Army troops and was a seat of local government. Roy also pointed out it was the site of a murder (1766) and had the family connection to John Singleton Mosby (the Confederate Army’s Gray Ghost).

Driving down Trenholm and onto some side streets, the conversation turned to the dangers of avoiding deer on rural roads. Thankfully, this particular drive was deer-free.

Funnily enough, a few minutes after we left headquarters, Dawn had asked, “What do you do if a person is not home?”

Guess what? It happened at our first stop – no one was home. We were disappointed, but the other three stops were close, so we decided to try back at the end.

Heading back to Trenholm Road, Elwood briefly pointed out a house where he said the Electoral Board used to meet. He said he would add more later. For those of you who don’t know, Elwood, who is 90, served Powhatan on its electoral board for 60 years.

Less than 15 minutes later, we made our second delivery to an older woman who greeted us warmly. It was a quick stop, and leaving her driveway, Roy was still preoccupied and sad that the first recipient wasn’t home.

“Usually they are standing there waiting for you, just like this lady,” Roy said, pointing to the second house. “She was standing by the window.”

The woman who answered the door at the third home was just as happy to see us. She said the presents were for her son, who has disabilities.

“He is so happy every year to have you come,” she told the group. We assured her we were just as happy to be there.

On Cartersville Road, Elwood pointed out land that belonged to the Willis family and, according to him, was the biggest dairy farm in Powhatan County at one time. It made me think a little sadly of a story I wrote earlier in the year about the last dairy farm leaving the county.

Now, up to this point, Elwood had been kind of quiet. At one point we turned from Trenholm Road left onto Cartersville Road, and near the junction, you can see a small sign that says Pine Tree. Elwood pointed out that there used to be a large pine tree at this intersection that no longer stands there, although there are some others nearby. When it stood, the tree acted as a great landmark to give directions.

We were driving a little fast and missed the fourth house on Cartersville Road, but rather than turn back immediately, Elwood kept driving until we reached Muddy Creek, the border with Cumberland County. This was to answer a question Dawn had asked earlier about how close we were to the neighboring county. He also took a side trip to let us see Tamworth Mill, which is a beautiful historic structure that was used recently as a filming location for “Harriet.”

At our fourth house, a woman answered the door and gave us a big welcome. Her mother, the Christmas Mother client, was eating breakfast but also greeted us warmly. We all crowded in to wish them a Merry Christmas.

It had been a great trip so far. There was just that one dark spot – the missed delivery.

We called the number provided for the first home and were ecstatic to learn the client was back home. This meant heading back to Trenholm Road, and as the junction came into sight, Roy tried to confirm the location. Elwood surprised us by gleefully saying, “Pine Tree!”

“Pine Tree,” I repeated. “Were you not paying attention Roy?”

“You’ve got to look for the pine tree that isn’t there,” he agreed with a nod.

On the way, Elwood paused by the house from earlier. He said it was the site of his first electoral board meeting and was then a grocery store operated by B.W. Wilburn. I asked Elwood to confirm the spelling of the man’s name, and he did so by going home and looking through his records. About two hours after our ride ended, he texted me a photo of a reimbursement receipt Mr. Wilburn received in 1956, paying him $7.50 for a meeting of the board and $1.40 for 20 miles of travel at 7 cents per mile.

Back at our first stop, we met an older man whose house was a testament to his love of fishing, complete with a wide array of fish trophies and certificates. The man, Roy, and Elwood spent a few minutes talking about fishing spots before we left.

Elwood has a habit of trying to never go back the same way he came. Back on Cartersville Road but heading east, he talked about how it acted as the main thoroughfare from Cartersville to Richmond. He pointed out a house that used to act as an “old bootleg store” where a man would resell liquor out of his home.

Elwood talked about several places, including Provost, a private residence at the corner of Cartersville and Bell roads. It is an early 19th-century frame house that was once a general store, post office, telephone exchange, and a branch office of the state’s Bureau of Vital Statistics. Now on Cosby Road, Elwood pointed to his GPS and how the road, until just a little before we reached Route 522, closely parallels the James River, which it does all the way back to Cumberland County.

Before you know it, we were back at the headquarters with another great trip under our belts, a final selfie, big hugs all around, and a promise of more to come with Christmas 2020. Until then.