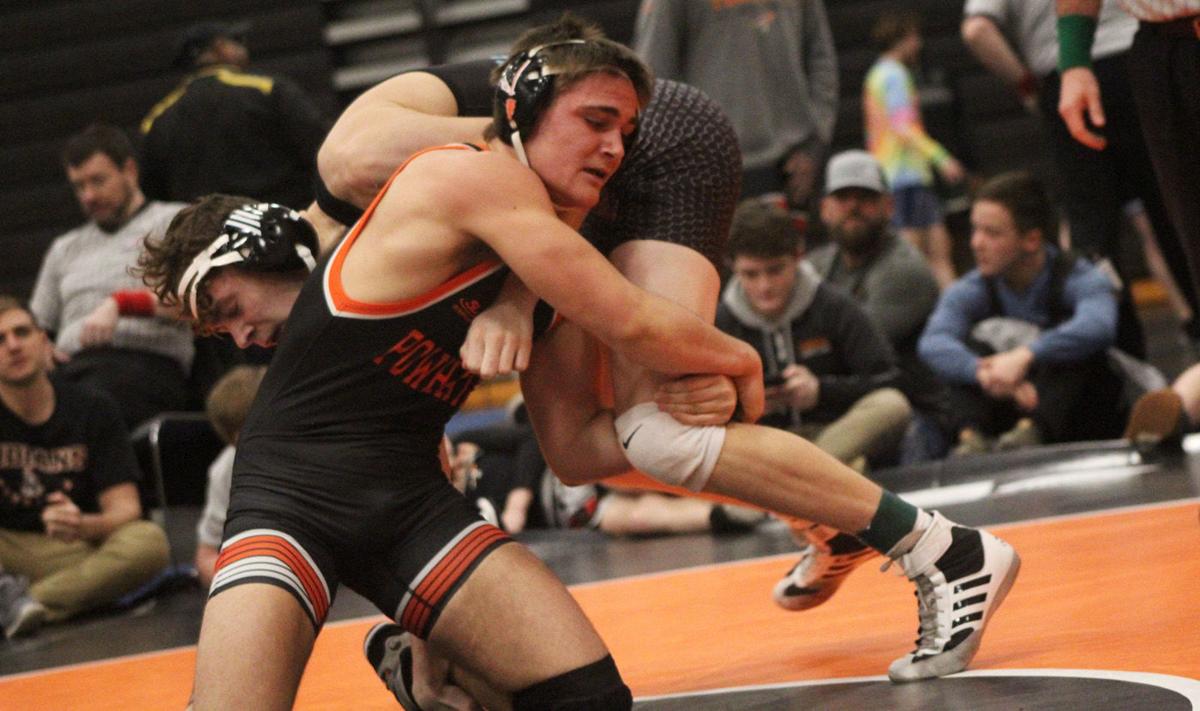 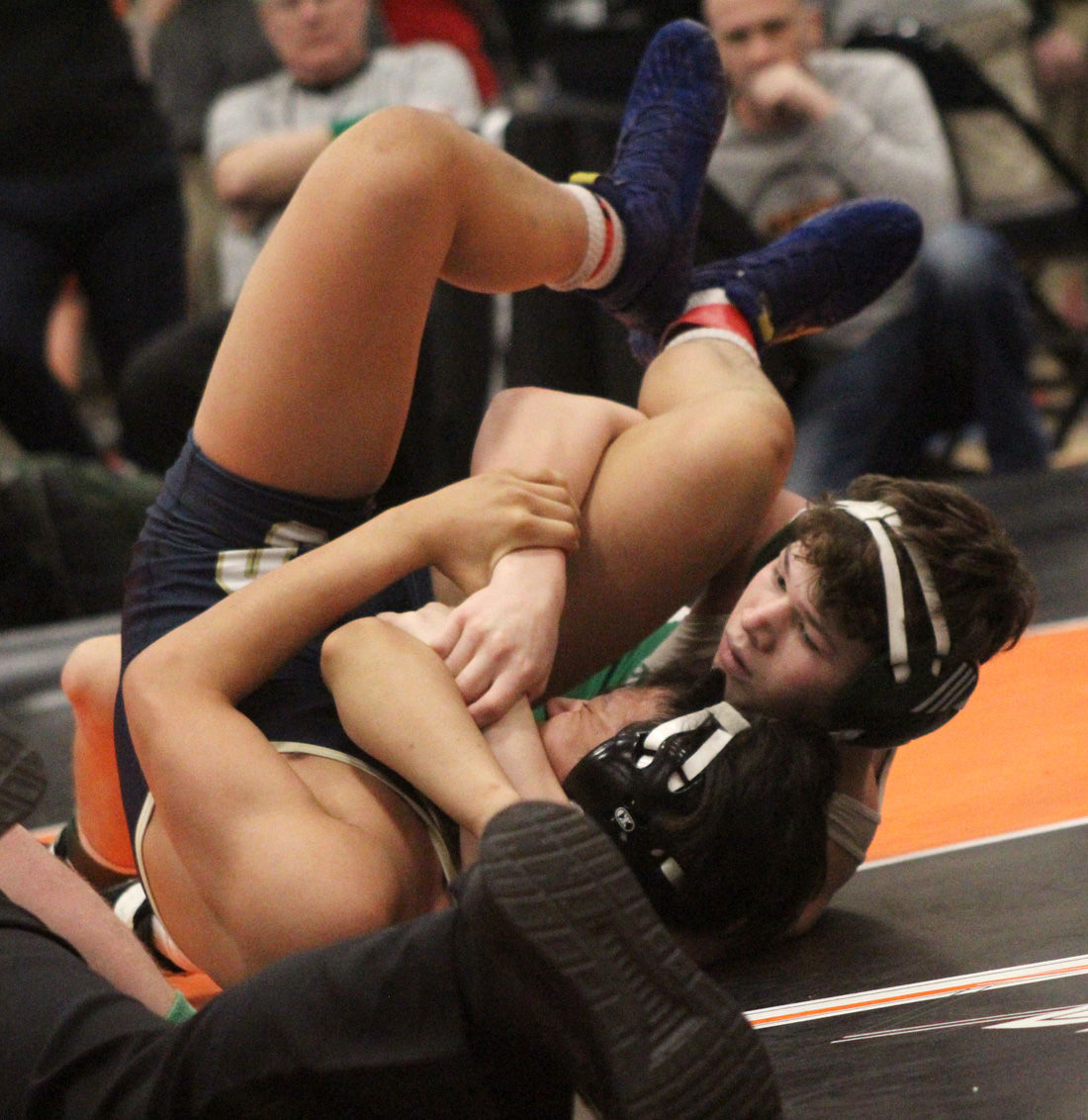 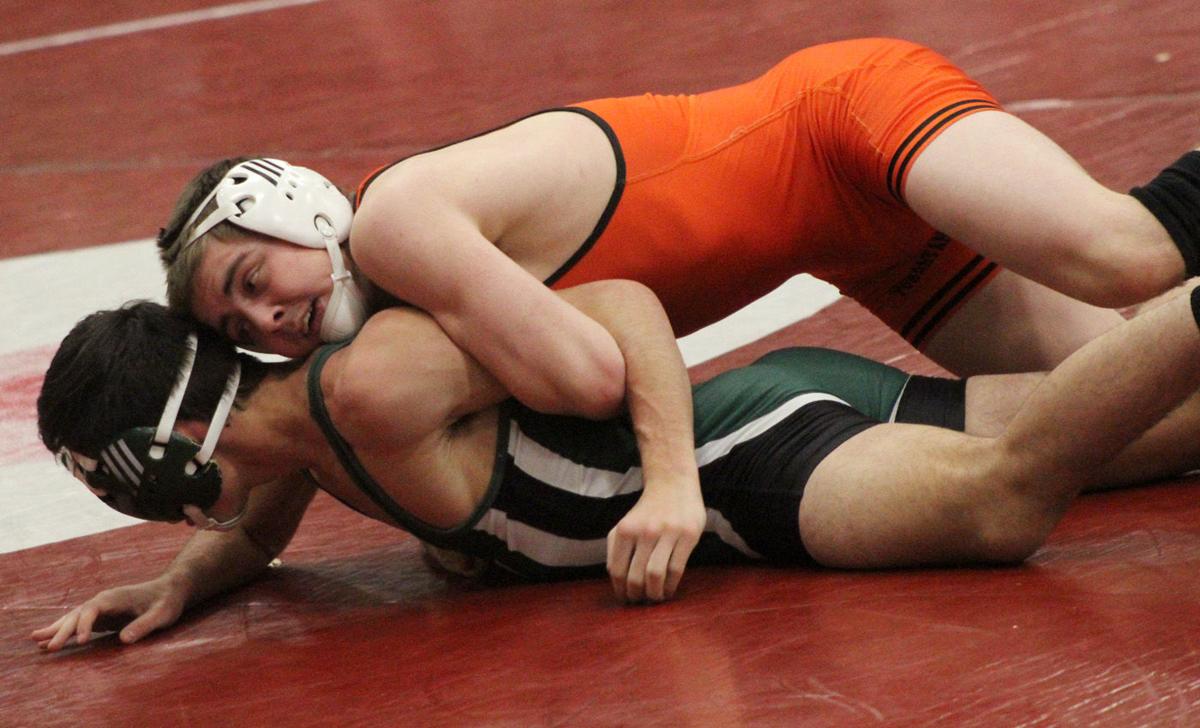 The Powhatan sophomore pulled off the pin 21 seconds into the third; one of his coaches began cheering right before the referee tapped the mat, and Rehme right after let out a “Whoo!” in reaction to earning the big victory and advancing to the final in his weight class.

He triumphed in that match, too, defeating Glen Allen’s Korey Polo by a 12-6 decision to win the invitational's 170-pound championship.

“It’s a big deal,” Rehme said. “I actually haven’t done a lot this year, and to win this, it really shows where I’ve come this season and shows everybody kind of who I am and puts my name kind of out there a little bit.”

Hill went toe-to-toe with Tirpak in the finals, going scoreless in the first period, grabbing a 1-0 lead with an escape in the second and then surrendering a point to Tirpak in the third.

But within the final 35 seconds, Tirpak went to headlock Hill.

Hill posted up on his elbow to slide out, then took Tirpak down to the mat to grab two points and the lead.

“Felt good, practiced hard all week with my partners Hayden [Fitzsimmons] and Hans [Rehme], Hill said. “I had to work on my top moves more and they helped me work my top moves, be able to keep people down, not giving up more points than I should be. It was a good tournament.”

Hall, who won all five of his invitational matches for bonus points, pinned his finals opponent, Midlothian’s Jackson Foldes, in 1:19 to earn his second individual tournament championship in the last eight days.

“It’s always great when you can win at home,” said Hall, whose last individual title came the previous Saturday in the Big Blue Invitational held in Christiansburg, which is located more than three hours west of Powhatan, featured tough competition and helped Hall in raising his intensity, he said.

“It was awesome,” Hall said of winning the Big Blue invite. “I was kind of in an ‘Oh crap!’ mindset when I was down 5-0 [to Christiansburg’s Luke Robie in the finals], but I just stayed calm and kept working to try to win.”

Hall in his Big Blue finals match trailed 5-1 after the first period, but grabbed another point and a late takedown to cut into the deficit at the end of the second. With about 20 seconds left in the third, Robie was in on a shot, he and Hall scrambled and Hall came out with a tight waist and had him on his back, stringing together a takedown with a near-fall. From there, Hall rode him tight to preserve an 8-6 lead and win the title.

And after he pinned Midlothian’s Ethan Ky in 1:31 to win the 160 title, May was honored as the invitational’s Most Outstanding Wrestler in the upper-weight division.

For this season, May noted how there’s been more emphasis on being a physical wrestler.

“Last year, I was kind of more depending on more of my technique, and I’d lose close matches to better kids because they’d be more physical and they were older, so they knew what they needed to do to win,” May said. “And I feel like, over the summer – I’ve gone to more national events, I’ve gone to bigger tournaments…it showed me that I needed to be more of a physical wrestler, be more aggressive in how I wrestle, which I feel like it kind of helped me out today.

“A lot of people I wrestled…right off the start, I would just get real physical and then it would kind of get them out of it mentally and kind of zone me in.”

May this year has been wrestling at 160, but he also started off at 152; he’s alternated between the two classes, but he said that 160 might be where he stays at.

May also got to share Most Outstanding Wrestler honors with his friend and fellow club wrestler Evan Buchanan, who was awarded the title for the lightweight division. Buchanan, who is set to wrestle collegiately for the University of Virginia, defeated King William powerhouse Austin Weeks by pin in 1:54 to not only win the 132 title, but also contribute to his Atlee Raiders’ Arrowhead Invitational team championship.

“It would’ve been nice to knock Atlee out, but at the same time, they came and wrestled, and they deserve it, so credit to Coach [Gabe] LaVey and their team,” Powhatan head coach Jonathan Tanaka said.

Andrew Cheatham (145), AJ Gaskins (152) and Hayden Fitzsimmons (182) also represented Powhatan in the finals. Cheatham ran into a tough foe in Midlothian’s Crew Gregory, but limited Gregory to one bonus point as he defeated Cheatham by a 10-2 major decision. Gaskins went toe-to-toe with Midlothian’s Ashby Berry, tying him at 2-2 late in the match. But with six seconds left to wrestle, Berry pulled off the escape to hand Gaskins a 3-2 heart breaker.

Tanaka said that Fitzsimmons “wrestled a heck of a match” against Wilson Memorial’s Chase Wilson, tightening Wilson’s lead to 4-3 late in the match before Wilson added a last-second insurance takedown to secure a 7-4 decision and earn his 100th win.

“Really, really important matches for us to be able to learn from as we move forward,” Tanaka said, adding: “Our JV guys did phenomenal today. I’m really happy and proud for those guys to be able to wrestle in their home gym in front of some fans.”

“I think everyone’s starting to get in a lot better shape,” Hall said. “Their conditioning’s getting better. Like Hans, he cleaned up some small things, like his Petersons (rolls) and stuff like that, which helped him win the match today.”

Rehme noted how he’s gotten a lot better at keeping his feet moving and transitioning from move to move when he’s on the bottom to get out or get a reversal.

“I’m just proud of the team,” Rehme said. “Even though we got second, we still fought hard, everyone did. Just a great day today.”

Wilson Memorial, located more than an hour-and-a-half northwest of Powhatan, further added to the invitational’s already highly competitive pool of wrestlers and gave the Richmond-area teams and Williamsburg’s Warhill a new selection of faces to take on. The Fisherville-based team took third overall.

“Wilson Memorial was really happy with the way the tournament was run, so hopefully they’ll come back next year,” Tanaka said. He also pointed to the crew of teams that have been supporting the invitational since the beginning, including Highland Springs, Clover Hill and Thomas Dale.

Tanaka continued to express his appreciation for Powhatan wrestling coach Richard Fitzsimmons, who ran the tournament, and for Shannan Lindhjem, who ran the hospitality room.

“It’s really important for us to be able to host this event and be able to showcase our community,” Tanaka said. “Regardless of the outcome, it’s always a good time for us. A lot of people are always very complimentary of the building, of the hospitality room, just of the experience in general, which I think says a lot about our county and our community, the wrestling community and Powhatan County as a whole.”

Powhatan will wrestle Goochland this Wednesday, Jan. 29 in a 6 p.m. dual at Goochland High School.