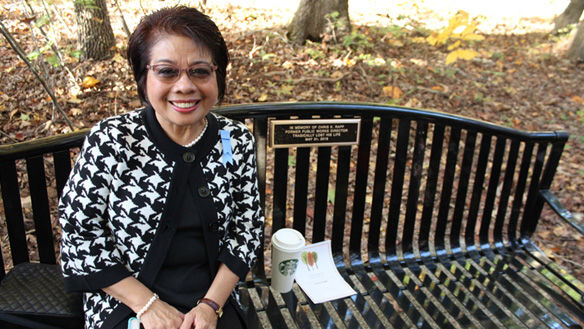 Bessie Rapp sits on a bench in Fighting Creek Park dedicated to the memory of her late husband, Chris, a former Powhatan County employee. 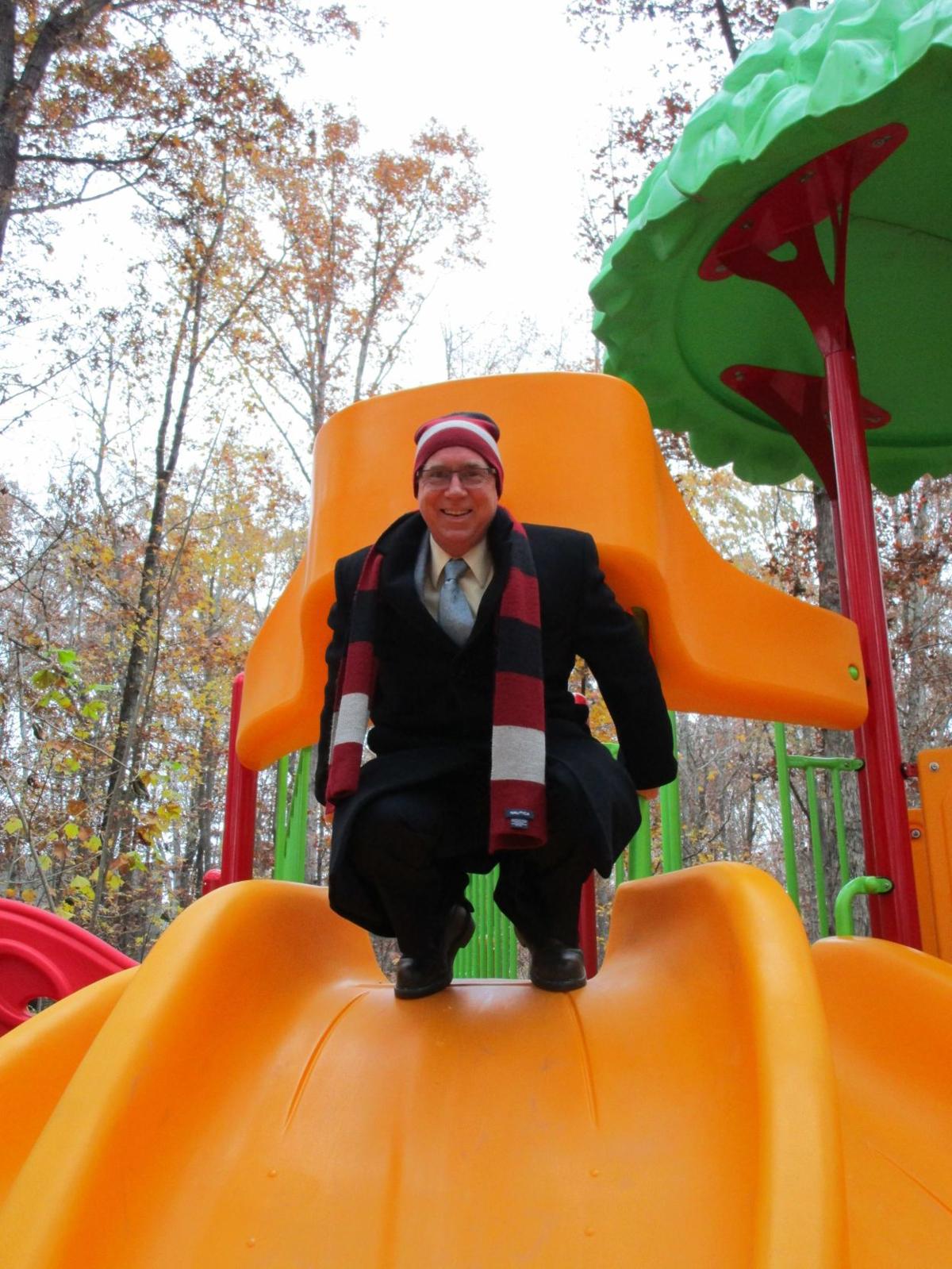 Chris Rapp is shown on the day the playground opened in Fighting Creek Park. A plaque in his memory has been placed at the playground.

Bessie Rapp sits on a bench in Fighting Creek Park dedicated to the memory of her late husband, Chris, a former Powhatan County employee.

Chris Rapp is shown on the day the playground opened in Fighting Creek Park. A plaque in his memory has been placed at the playground.

POWHATAN – The work he did on the trails and playground at Fighting Creek Park was one of Chris Rapp’s proudest accomplishments while he worked for Powhatan County.

Now, his memory has become part of the park, with a new memorial bench and a plaque dedicating the playground in his name to honor his memory and his contributions to Powhatan County in the roughly eight years he served as the county’s director of public works.

Rapp was one of 12 men and women who were killed on May 31 in a shooting at the Virginia Beach Department of Public Works. He worked for almost two years in Stafford County before his 11 months in Virginia Beach, but prior to that, he worked in Powhatan from 2007 to 2015.

About 100 people attended a dedication on Monday, Oct. 28 at the park only a few yards from where the new bench sits at the start of one of the trails. A plaque remembering him can also be found just outside the playground area.

In all of the places he worked, Chris Rapp gained personal and professional satisfaction and fulfillment, his wife Bessie Rapp said. But even after he left his job in Powhatan, the couple retained their house here, because they consider Powhatan home, she said.

“I am profoundly thankful that Powhatan County is dedicating this Fighting Creek Playground Park and bench in memory of Chris. It is heartening to know that Chris is being recognized and celebrated for his hard work and total dedication to his job for this county,” she said. “I am sure he is with us right this very moment – smiling ear to ear up there in Heaven, looking down on us and enjoying the honor being bestowed on him today.”

Several people who knew Chris Rapp through the years spoke about him at the event. Supervisor Carson Tucker, who represents District 5, described him as calm, deliberate, dignified, objective, thorough, smart, proud of his profession, a good citizen, and a good husband.

Bill Melton, District 4, talked about Rapp’s work on the playground and his dare, “bet you won’t slide down the slide. But I did,” he said as the crowd laughed.

“I can’t think of a more appropriate place to recognize Chris as in front of this playground equipment, which many of my grandchildren have used and many children in this county will use. Chris will always have a twinkle in his eye in overlooking these children,” Melton said.

Rapp took the dare himself, as photos document him perched above the playground slide dressed in a suit and wearing a big smile, county administrator Ted Voorhees said.

“This is quite a park. You come here especially on the weekends and the place is packed. Chris deserves great credit and appreciation from our community for bringing it to life,” he said.

Chris Shust, chair of the parks and recreation advisory commission, said when they were approached with the request for the dedication, the members made the decision quickly and started working on how to get it done because it is an important memorial to put in place.

Shust said he met Rapp about 20 years ago, when the latter worked for Henrico County. Shust worked in the private sector and Rapp for the local government, and while they didn’t always see eye to eye, they “always had a great respect for each other.”

“Even when we were disagreeing, the one thing about Chris was that he was always willing to try to see a way to make a compromise. Figure out a way to find a solution that people could be happy with or at least accept if they couldn’t be completely happy,” he said. “I am really proud of the fact that as a community we are going to have this bench here. I think it is fitting … and a lasting tribute to Chris’ memory. When you want to come and sit and reflect for awhile it will be there.”

Ramona Carter, director of public works, read the resolution passed by the board of supervisors on June 24 in Rapp’s honor. Although she didn’t work with him, Carter said she constantly sees and enjoys work he completed – the concession building at the ballfields, the trail, the safety building, and more.

“We wanted to do this – the bench and the dedication – so that future generations can remember him and the contributions that he made and how he made our lives better in Powhatan,” she said.

Former county administrator Carolyn Bishop, who hired Rapp, said a terrible act took his life, but they were there that day to remember how he lived that life.

“A couple people have mentioned it, but the Chris that I will remember is that brilliant smile. He was always fun,” she said.

When interviewing him for the director of public works position, she said it was obvious he was highly credentialed, Bishop said. But the real reason that she “chose him was because he was ethical and honest and transparent and kind. It was obvious to us.”