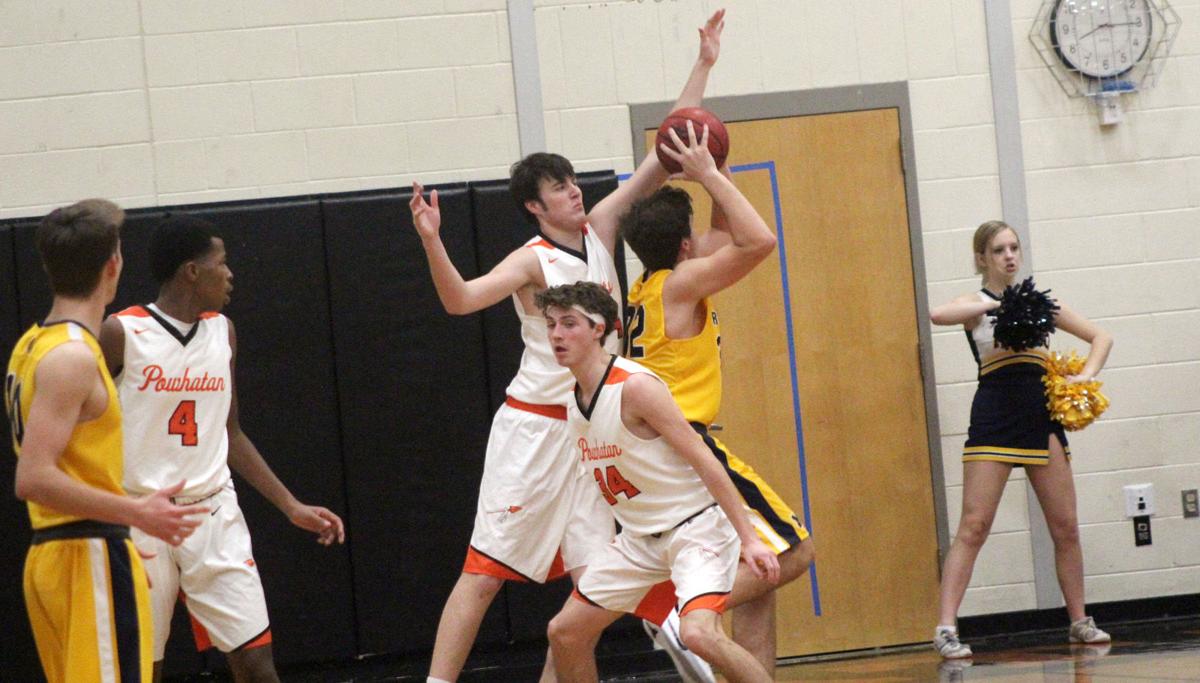 Powhatan's Ethan Kramer (center, background), seen defending against Midlothian's Jackson Dillon in a December game, played strong defense against Dillon to help his Indians defeat Midlothian 68-58 the second time around on Friday, Jan. 24 for their first win of the season. 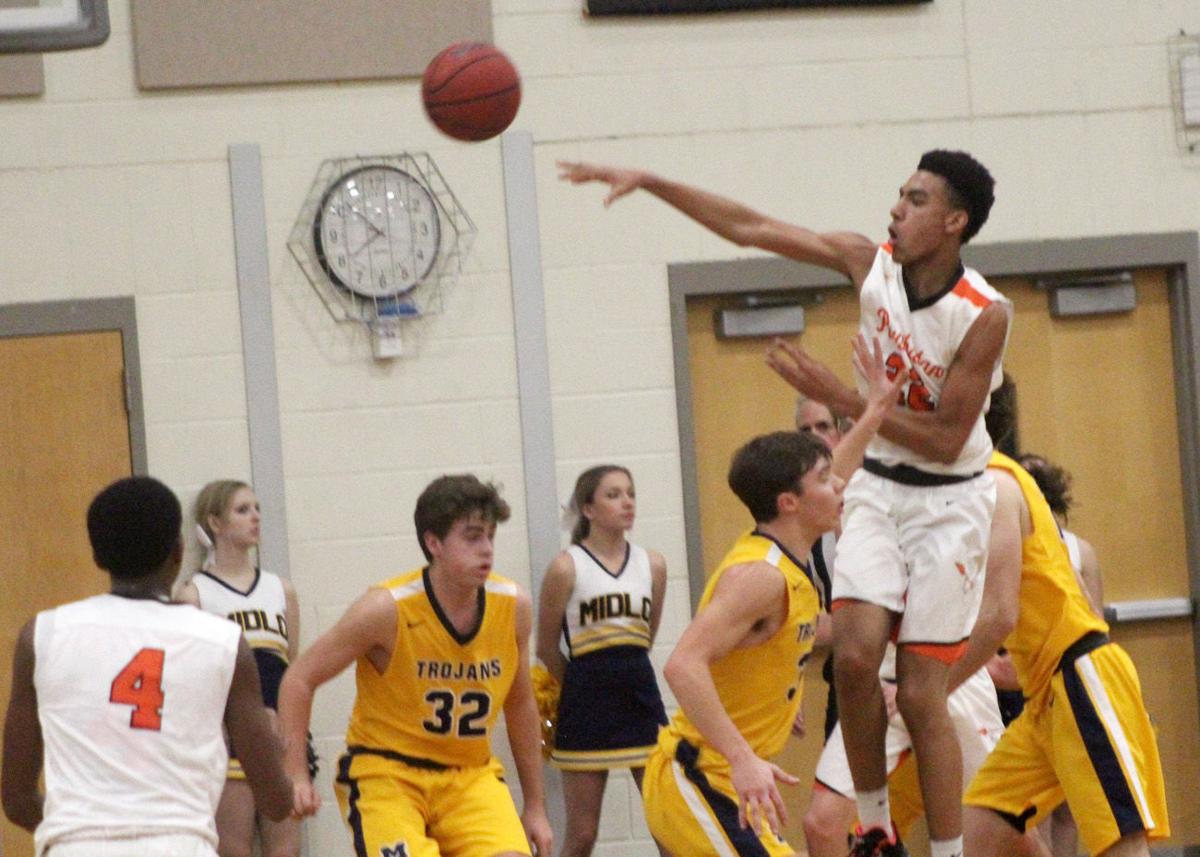 Powhatan's Brylan Rather, seen passing the ball in his Indians' December home game versus Midlothian, scored 19 points on Friday, Jan. 24 to help his Indians defeat Midlothian the second time around, 68-58. 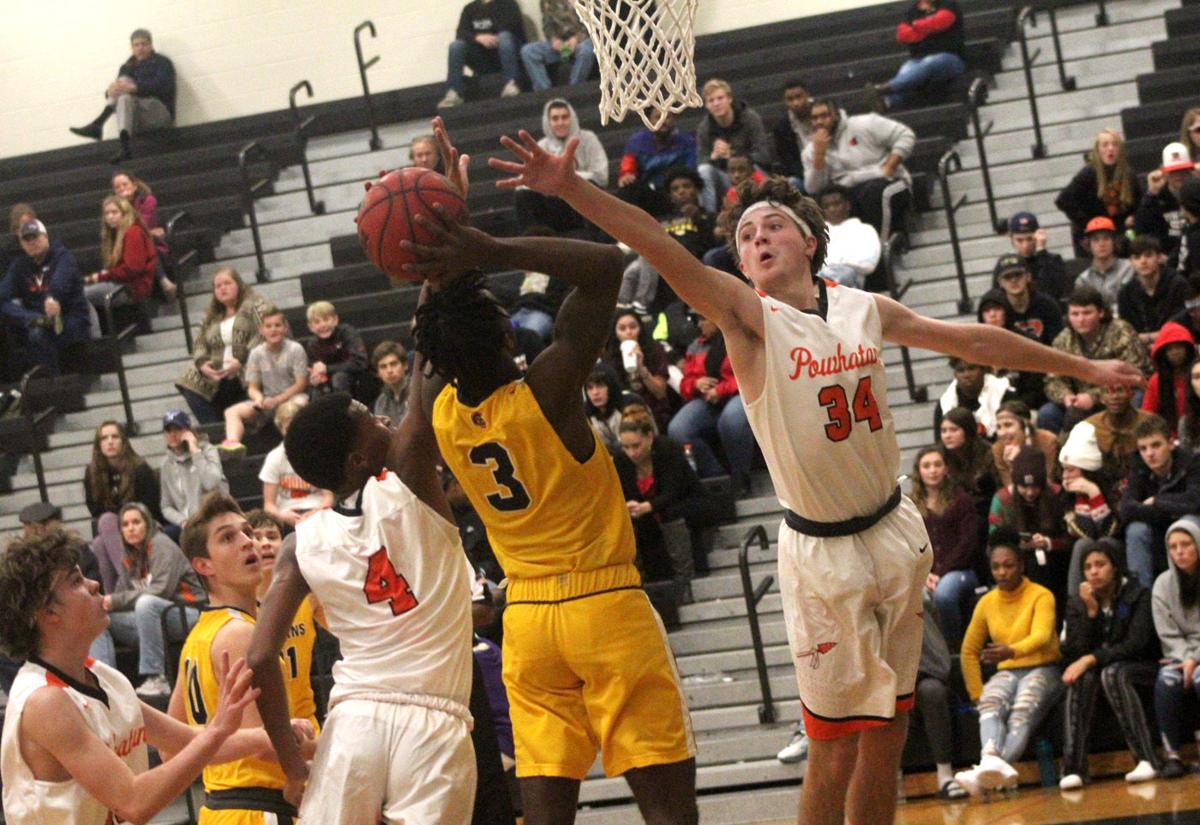 Powhatan's Ethan Kramer (center, background), seen defending against Midlothian's Jackson Dillon in a December game, played strong defense against Dillon to help his Indians defeat Midlothian 68-58 the second time around on Friday, Jan. 24 for their first win of the season.

Powhatan's Brylan Rather, seen passing the ball in his Indians' December home game versus Midlothian, scored 19 points on Friday, Jan. 24 to help his Indians defeat Midlothian the second time around, 68-58.

Head coach Ryan Marable, in his first year as the team’s head coach, said it was the first time that all five of his players on the floor, on every single possession, really buckled down on the defensive end.

And that, in turn, led to the Indians knocking down shots, getting into the lane, making several free throws…

…and knocking off Dominion District opponent Midlothian 68-58 for their first win of the season.

“I told the guys that I’ve had a lot of fun coaching them this year, and the best thing about the win is that, the time in the season it came together, we stayed together the whole season,” Marable said. “There’s not too many teams out there I think that could’ve gone winless for that long and stay together, so it was a real testament to them and the coaching staff, just all of us showing up every day and trying to keep getting them better, and for them to try to keep getting better.”

Brylan Rather scored 19 points in Friday’s win, and Logan Wyatt made 15 points.

After taking a 59-42 home loss against the Trojans in December, the Indians this time around were the aggressors on the defensive end.

“We took away things we knew they were going to do instead of playing from behind and just kind of hoping they didn’t beat us the way they could beat us,” Marable said. “And then on the offensive end, we really did the same thing. We tried to be the aggressor.”

Powhatan gradually built up a 15-point lead in the second half; Midlothian would battle back, however, and the Indians would get themselves into positions where they really needed a play to stop their momentum.

“And we had guys step up and make a play,” Marable said. “Every time they started battling back, we were able to make a play, either on the offensive or defensive end, to really stop their runs.”

“He played…probably the best game defensively that I’d seen him play,” Marable said of Kramer.

The Indians were also able to execute plays offensively that got Rather the ball in spots where he needed to be, whether it was in a place where he could knock down a shot or in a position where he could get to the free-throw line.

Senior Jay Harris was able to get into the lane, put pressure on Midlothian’s defense and keep up his attack on offense.

“This was one of those games that was really fun for us as a staff because their energy and their effort and enthusiasm really allowed us to coach the game of basketball; it wasn’t begging a certain guy to play more physical, or to play smarter or anything like that,” Marable said. “Their effort warranted us being able to X-and-O a little bit, and that was fun. And when we did X-and-O, we executed pretty well, and the guys got the benefit of individual and team success.”

Powhatan after Friday’s win knocked down 11 3-pointers against Hanover on Saturday and rallied late in the fourth quarter to tie the game, but the Hawks pulled away to win it 65-58. Harris led the way for Powhatan with 16 points, and Wyatt and LJ Alston each netted 12.

The Indians then rematched Cosby on Monday but fell to the Titans 71-47. Rather scored 12 points on Monday.

A challenging stretch of games remains this week for the Indians, as they’ll take on George Wythe on Wednesday and Monacan on Friday. Both games are at Powhatan High School and will tip-off around 7 p.m.

“If our energy and our effort isn’t there from all five guys on the defensive end, it really puts us in a tough position to beat those talented teams, and we saw that with Hanover and Cosby after the Midlothian game,” Marable said. “We couldn’t get the stops that we needed and didn’t play the right way defensively, so it really hurt us in those games, and it’ll be the same with George Wythe and Monacan…if we’re not locked in defensively, then it kind of hurts you because if you’re not perfect on the offensive end, then that 4-point lead is going to turn into an 8-point lead, then turn into a 12-point lead.”

Marable is looking forward to more wins for his players, whether they come this year or in the future.

“It’s a byproduct of their hard work and their attitude,” he said of Friday’s win. “Just really thankful to have the job and to be able to make a difference in these kids’ lives.