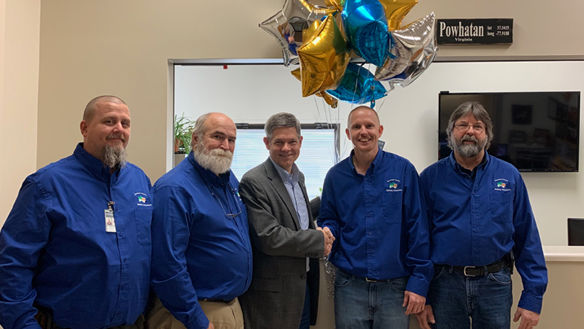 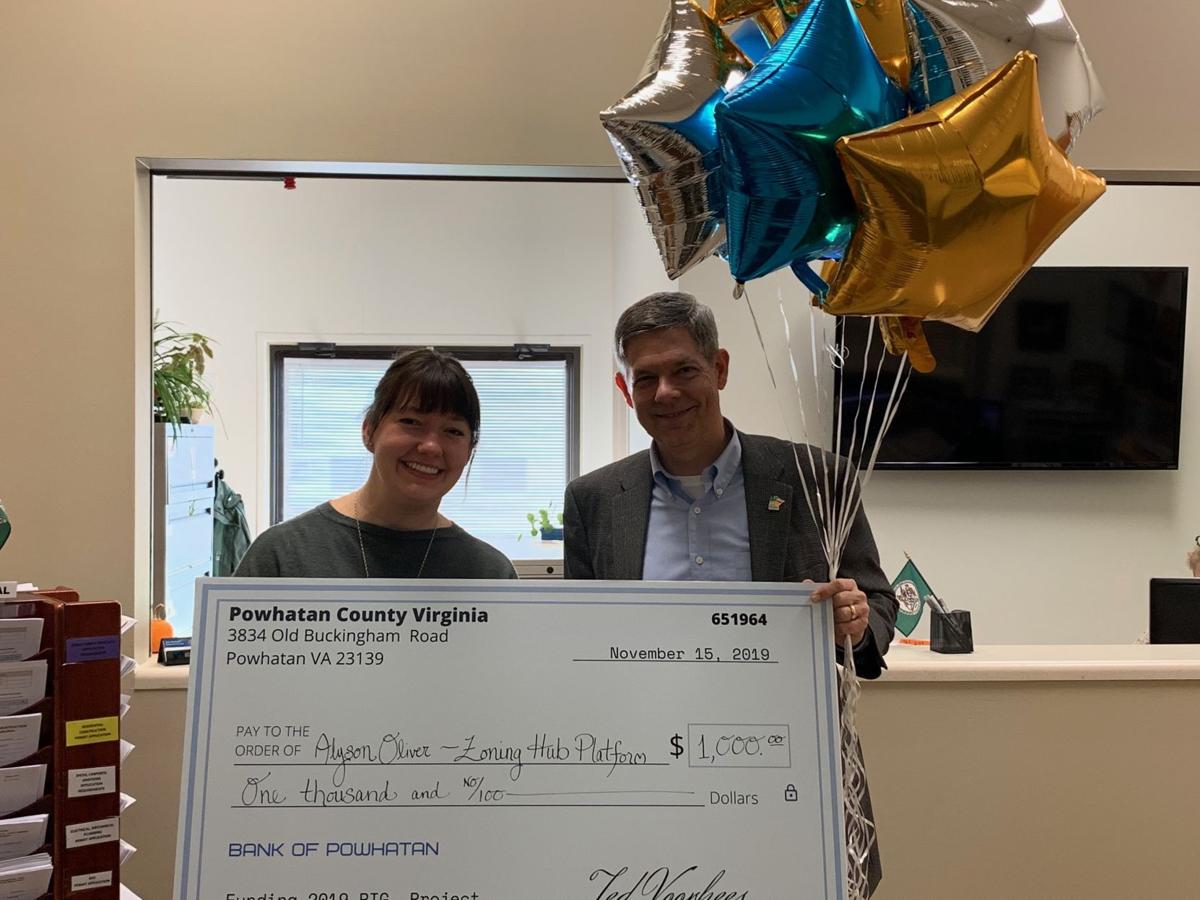 POWHATAN – Powhatan County asked its employees for good ideas, and it got them.

The county recently announced the winners of the new Process Innovation Grant (PIG) contest, which was held to promote innovation and creativity among staff and hopefully find ways to improve the services offered by the local government.

The project seeks to initiate use of PayGOV.US, a free service for localities, for use as a method of online payment for a permit, re-inspection, and other fees, so that contractors can avoid time-wasting trips to Powhatan County government offices to pay in person. Any re-inspect fee must be paid prior to scheduling inspections and this will allow them to pay over the internet prior to the county’s 3 p.m. cut off time and still maintain their schedule.

Dunivan said he knew about the service because it is already in use in Cumberland County, where he lives. When he learned the counties who use this service do not incur any fees, he and the other three men on his team thought it would be a great resource for Powhatan and collaborated to create a proposal and presentation.

And the best part about the Happy Contractor pitch – adding the service to the county wouldn’t cost any money. This led the PIG committee to name a second-place winner, Alyson Oliver’s “Zoning Hub” project, which was awarded a $1,000 grant. Her idea suggested setting up and implementing an all-in-one zoning information platform for Powhatan County through Zoning Hub (zoninghub.com).

The purpose of the PIG contest, which was announced in the fall, was to create improved work-flow through out-of-the-box thinking and concepts that break the typical mold, Voorhees said. The grant is a one-time allocation of funds to be awarded to projects that show process improvement methods to better serve the citizens and save staff time or money. These projects must be completed within the fiscal year and allow for measured results of greater service. The funding does not cover projects for typical budget funding requests.

The innovative entrants were required to fill out an application and to participate in an in-person interview to explain their project. They had to explain how the project would be an improvement to workflow or the customer service experience and include a proposed budget.

“It was a lot of fun and I think it shows we’ve got a great staff. As long as we give them opportunities to be creative, they will shine,” Voorhees said.

He added that he loved how much fun the staff had in planning and executing the grant process. The committee that chose the acronym for the contest got Voorhees to shoot a tongue-in-cheek video with Tucker the Pig encouraging employees to enter this fall.

Winners were chosen by a judging committee who independently and privately scored all nine areas of the application and obtained a total score. All judge’s scores for each project were totaled, and the highest-scoring projects won.

On Wednesday, Dec. 4, the building department issued its 1,000th building permit for the year, Dunivan said. The last time the department saw numbers like this was in 2006 and 2007 during the last big construction boom.

“We have been very busy. Actually, throughout this whole year we have been up 20 percent over last year pretty much the entire time,” he said.

That is not only a big workload for the county employees to handle, but it is a great deal of time spent by local contractors and business owners having to come to the office to fill out and turn in paperwork, he said.

“In the past people have inquired about it. There has been a little bit of frustration of not being able to pay fees online. This would just make everybody’s life a lot simpler and easier and more convenient. Every contractor typically has a cell phone in their pocket that is connected to the internet, so they don’t even have to leave job sites in order to pay fees,” Dunivan said.

The project has not been implemented yet because the contest just ended, but county staff will hold meetings at the beginning of the year to implement a pilot program, which hopefully will transition into a full implementation, Dunivan said.

“We were all pretty thrilled, because, typically, with a grant you are thinking monetary funds awarded, and ours actually doesn’t cost anything. Any fees incurred are passed along to the contractor or whoever is paying the fees,” he said. “At the same time we are providing another level of customer service at zero expense, and it is actually freeing up county staff time in the process.”

Voorhees pointed out that when county staff first began discussing how much would be the right amount for the grant award to be an effective project, he wondered if there were any ideas that could be executed for free. So he was pleasantly surprised when the building inspector group’s idea proved those options are out there.

When thinking about an idea to submit for the contest, Oliver said she wanted something that would increase transparency, “especially when it comes to land use and zoning-related cases because they are incredibly hot topics” and becoming increasingly important to more people.

The zoninghub.com platform will allow the planning department to easily share information with the general public all in one place, said Oliver, who is a planner II. Some of the most common questions the office receives that could be easily answered online with this service include: What is my property zoned? What can I do with my property? Where can I put my business? What zoning applications are currently under review in the county? Every day, the planning department receives dozens of calls from members of the public with questions like these.

Currently, the answers are located in several different documents and map that are available but not always easily accessed, Oliver said. This is confusing for citizens, making it difficult for them to find the answers they need. The Zoning Hub platform would provide answers to these frequently-asked questions in a user-friendly and detailed format, thereby increasing transparency and efficiency.

“We get calls every day asking us questions. Sometimes they are really unique, and sometimes they are the same question over and over again – like ‘Can I have chickens on my property?’ We will be able to have all of that stuff in one location so it saves everybody time and allows people to feel like they know where that information is located,” she said.

The website also has the capability of letting people sign up to receive notifications any time a new project is proposed near their house or check on pending or approved applications, Oliver said.

“It will take awhile to get all the approved ones up there, but starting with current applications, those will be there,” she said, adding a date had not yet been set on getting all of that up and running.

The county received project proposals from several other employees:

* Jeffrey Wallace, with the fire and rescue department, proposed using the “First Arriving Digital Dashboard,” a platform that links to the county’s computer aided dispatch to display real-time dispatch information, links to scheduling software to show who is on duty, and lists who will be coming in.

v Carla Neidigh, with county administration, submitted the Citizen Education Understanding and Service project, which seeks to implement a formalized, multi-faceted, face-to-face citizen-engagement strategy. The strategy consists of town halls, monthly coffee with staff, office tours, focus groups, a county staff night, and other seasonal events. She said, “When citizens know why and how decisions are made, they will have higher satisfaction with county government and are less likely to disseminate erroneous information to their peers. When we learn what citizens consider important, we can make decisions that better represent their interests. More understanding equals smoother and quicker progress.”

* Tracey Holyfield, with the finance department, suggested “T-Shirt Fridays.” She wrote, “Friday is a casual day, why not take some of the guess-work out of deciding what to wear. Having the option of putting on an orange or black T-shirt with the county logo solves that problem. Casual Fridays offer employees one day's respite from company dress codes, in place of business wear, and dress-down days can be a way to reward employees for good work, thereby boosting morale.”

* Amanda Zirkle, with human resources, submitted “The Employee Rewards Program.” It would utilize prizes and other forms of incentives, to include team building activities and fun office days, to keep employees engaged, motivated, and feeling valued.

* Jamie Timberlake, commissioner of the revenue, suggested offering the “Business License Application Online.” Applying for a business license online would save time for both citizens and staff.

Voorhees said he will be working with each department to decide how the county could implement all of these great ideas within existing resources or consider them for funding in the next budget cycle.