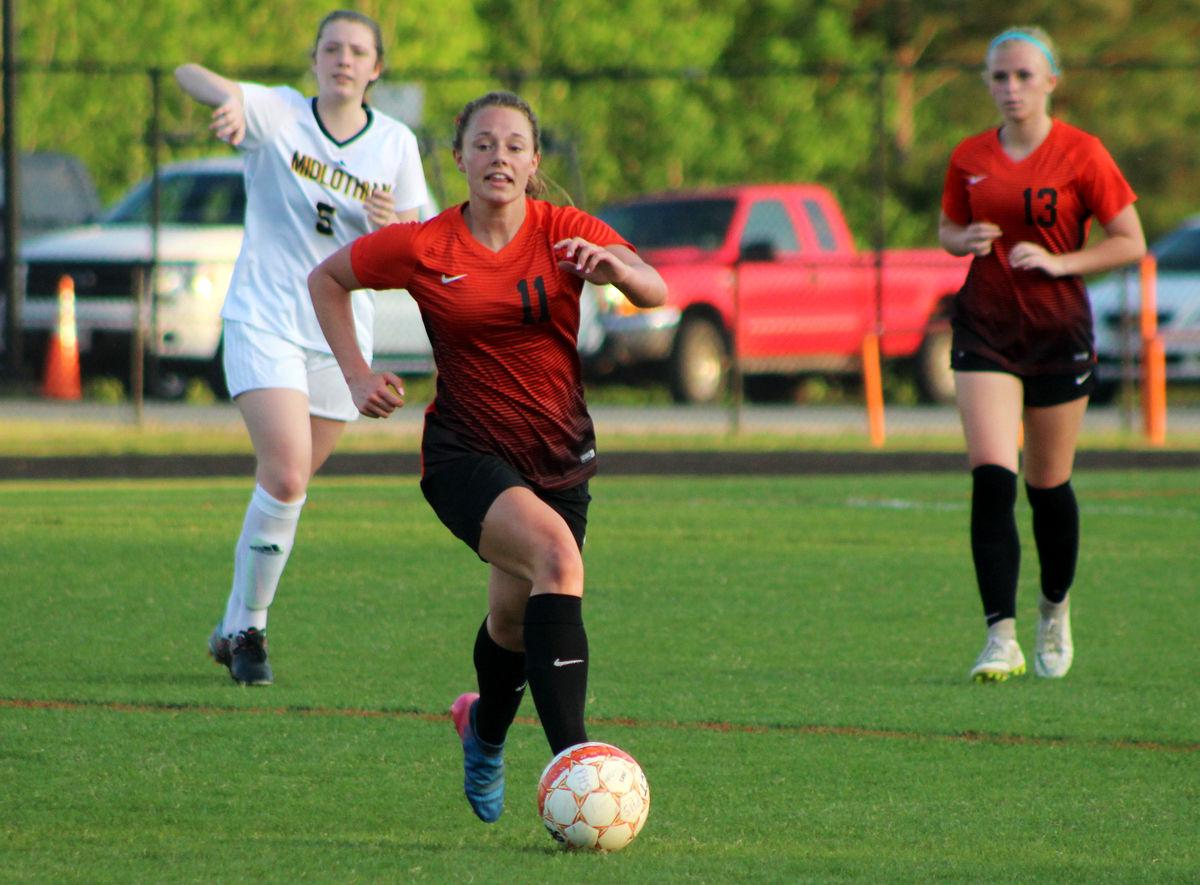 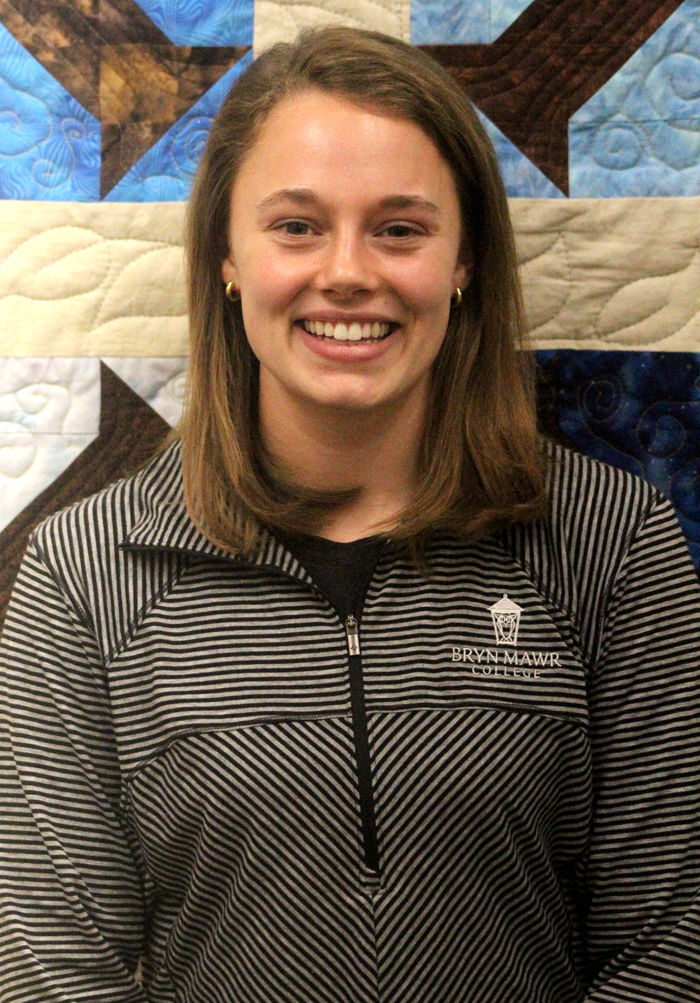 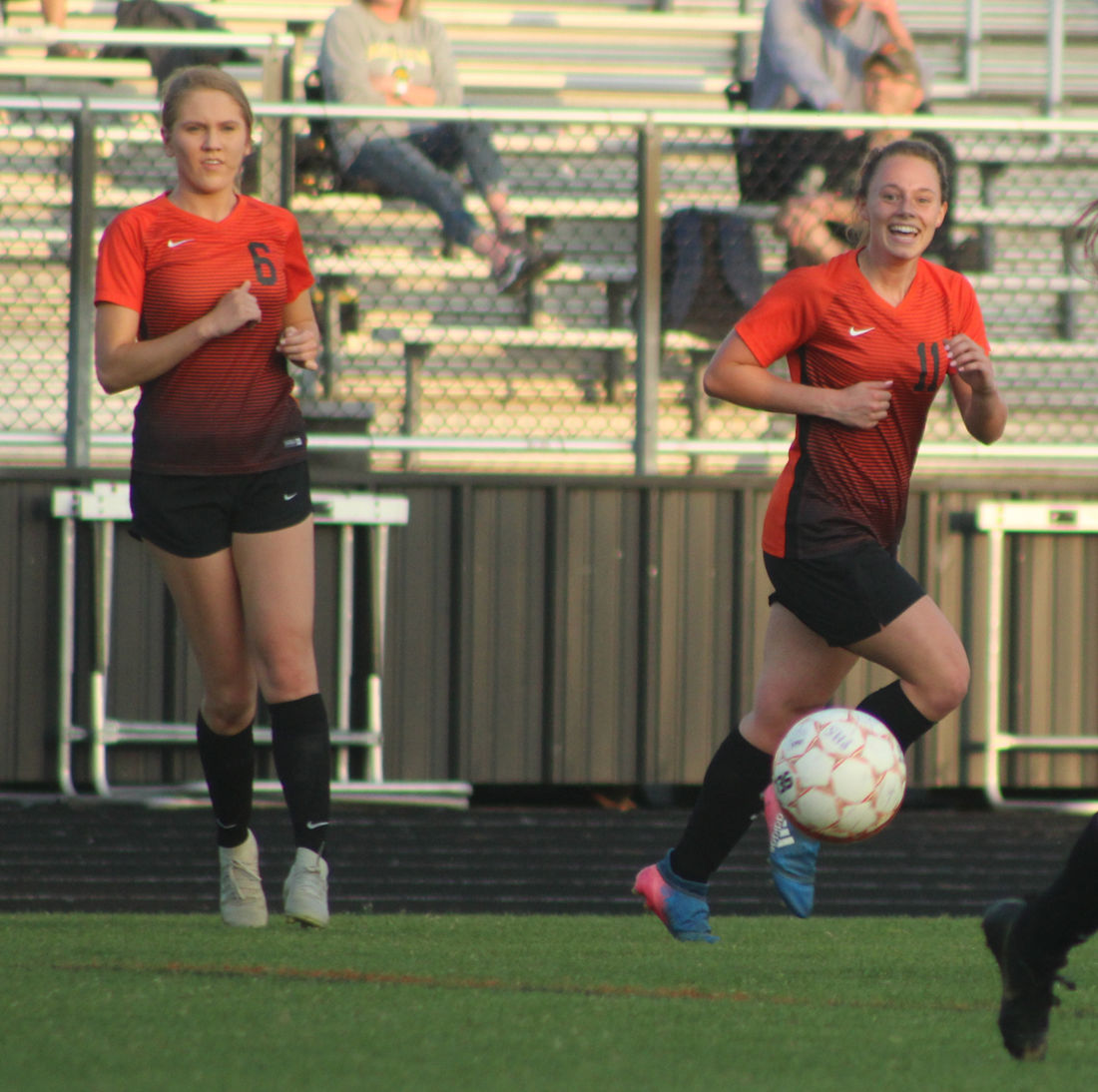 POWHATAN – Jeanne Wolkiewicz has been playing soccer continuously since she was about 12 years old. For those unfamiliar with the workings of the sport, that is an incredibly late time to start, she pointed out, as most kids begin playing when they’re 4.

She did briefly play when she was 3 – and she hated it; she went to one game and that was it. From there, she tried many different sports, including basketball, fencing, swimming, volleyball, dance and gymnastics.

She finally made it back to soccer when she was 12.

“And I was really, really, really bad – like I can’t put enough emphasis on how horrible I was,” she said. But her mom encouraged her to stick with it.

And then she played on Coach Kevin Cooper’s Powhatan Soccer Association team.

“He was the first coach I had that was like: ‘You can do this. I believe in you. You’re under-performing to your ability that you can have,’” Jeanne recalled. His message was: If you want to be good, you can be good.

“I didn’t realize I wanted to be good until he said: ‘You can.’”

Thus, the foundations for her rapid ascension were laid.

Jeanne made the Powhatan Fury travel team that year, took on hardcore training with EVLV in Richmond when she was 16 and became the first kid from Powhatan to ever make an Olympic Development Program team.

It was when she and her ODP teammates competed in France that she transitioned from “I can be good” to “I am good now.”

“You go from the kid that was last in suicides – that would skip as many laps as I could – to the kid that’s here to work, here to want to be better.”

Her meteoric rise on the soccer field – which has led to her commitment to playing Division III soccer for Bryn Mawr College near Philadelphia – has complemented her academic excellence and commitments to the community to help her become nominated for the prestigious Lexus of Richmond Leadership Award for 2019-20.

Her nomination for the $10,000 scholarship, which heavily features students from private schools and governor’s schools, comes a year after Powhatan had four nominees – the most for the school in a single year – qualify for the 2018-19 award. The four nominees were Jeanne’s friends Maggie Salomonsky, Calie Rehme, Katlyn Hicks and Jacob Moss.

“Powhatan’s a great place to be able to develop,” Jeanne said, adding: “The community here is amazing, and I’m really thankful for it.”

She plays travel soccer for FC Richmond – they were ranked no. 2 in the Club Champions League as of Dec. 16 – and she competes for Powhatan’s varsity girls’ soccer team as a midfielder. She also just picked up indoor track and field at Powhatan. Outside of her high school soccer team, she plays defense – specifically at left back – and she’ll continue to play defense for Bryn Mawr.

The relatively smaller and more personal soccer club, Powhatan Fury FC, was great to her, and she gave high praise to her ODP teams and coaches, noting how supportive they’ve been. The ODP teams consist of the national ODP team, state ODP teams and district ODP teams, and Jeanne has made it onto Virginia’s ODP state team. She and her state team did really well to the point that they should’ve gone to the national showcase that year, but instead competed in a showcase in Canada – in which they placed second – when the national showcase couldn’t be held. In France, they played three games in Paris, one game on the way to Bordeaux and one game in Bordeaux. While facing teams featuring 23-year-old opponents, Jeanne’s ODP team won at least three of their five games.

In addition to playing sports, Jeanne refereed youth soccer as a freshman and sophomore and through the beginning of her junior year, and she got to coach a 3-day soccer camp for the YMCA. She’s also helped with the Powhatan Warrior Run, a military obstacle course-styled 5k run that features runners from the community and beyond, and was founded by Calie Rehme.

Outside of sports-related activities, Jeanne works in the Provisions general store at The Mill at Fine Creek; at Powhatan High School, she’s held the role of office aide for two years. Her duties with that role include watching the office when Katherine Leonard can’t be there, taking passes, stuffing envelopes and decorating the front office for Christmas.

She loves being a part of the Powhatan High School Planeteers Club, of which she is a co-founder with two of her friends. While there was recycling in the teacher workrooms, the three wanted to get the classrooms to recycle as well, so the club took on that role. The students will also go on hikes and cleanups through the club, and they’ve done fun activities like make their own terrariums and hold a fundraiser to buy a state park pass.

She’s a founding member of the Environmental Youth Council of Virginia, comprised of environmentally-minded students whom she joined at the General Assembly in lobbying for environmental bills. She described that experience as “really cool,” “chaos,” “really cold, but very fun.” She’s also gotten to do cleanups through the council, of which she is the president this year.

She described the special needs prom that the NHS puts on as her favorite community service event that she’s been a part of while in high school.

She’s also in the Advance College Academy as well as in the Powhatan High School’s Ambassadors program, through which she does leadership training throughout the year. The idea behind the program is that the Ambassadors are model students who can provide help to other students in the building.

Academically, Jeanne currently ranks no. 2 in her class with a 4.818 grade-point-average. She’s been able to maintain her high academic standing – all-the-while taking on multiple extracurricular leadership roles in addition to growing into a college-level soccer player – through various strategies. There’s Google Calendar – she started using that this year thanks to her parents’ persuasion, and she described it as “a beautiful thing” – and she heeds the advice given by Rick Cole during her freshman year of ACA. She recalled him saying: “My most successful students use all the time that they get.” So, starting her sophomore year, Jeanne made a massive effort to finish all of her work – or as much of it as she possibly can – during school either when in-class assignments finish-up early and she has some time left over in the period, or when she’s in her office aide block. She’ll get all of her homework done when she gets home on Fridays.

“I definitely try to use every second I have,” she said. “Trick number-one is: just get it done when you get it.”

She’s had the same career plan since eighth grade.

“I want to be a Foreign Service Officer,” she said. “What I would want to do is specifically go into the part where I would help developing nations develop given what the U.S. has to offer.”

She loves the idea of helping people – helping to create a community. She loves learning languages, and she loves experiencing other cultures. She’s taken French classes all the way through French IV, and she’s gotten to speak the language along with one of her teammates, whose dad is Canadian, when she and her ODP teammates traveled to France. They’d meet teams who just spoke French, and Jeanne and her teammate would be the translators on their English-speaking team.

“When you have to use it” – Jeanne said of communicating in a foreign language – “you figure it out very quickly.”

“It’s definitely less about me and more about what everybody else has done to help me do this,” she said. “It’s like a shared victory – it takes a village.”

When she went to do her Lexus of Richmond TV interview, she remembered the person who was filming the interview saying something along the lines of: “Powhatan produces some of the most eloquent, well-rounded students I see through this program.” To Jeanne, that’s a reflection on Powhatan’s teachers.

“Every teacher I’ve had so far in this building has been amazing,” Jeanne said.

In addition to the strong bonds she’s built with her teachers and the support she gets from them, Jeanne’s friends have been incredible all four years. When she was missing classes for the Lexus of Richmond nomination interviewing process, they would take notes for her or help make sure she got her homework.

She’s really thankful for the coaching she’s received throughout her years. She described the message from a lot of her coaches as being: “We believe in you, we see potential and we’re going to take that potential and run with it.”

“I’ve been lucky to have some coaches that have kind of pushed my boundary and my knowledge of the game, from Coach Cooper to the coach that I’m going to have at Bryn Mawr,” she said. “I’m excited.”

Throughout it all, her parents have been her rock.

She’s an only child, and her mom and dad are invested in helping her get to where she wants to be. For instance, she’s an ambidextrous talent on the soccer field, and she gives full credit to her dad for making her learn how to use her left foot. For tournaments, they’ll drive members of Jeanne’s team to where they need to go in their Suburban.

She remembers very fondly how they both took her to visit Haverford College in Pennsylvania when she was still looking at colleges. It was supposed to be a four-and-a-half-hour trip, but it ended up morphing into an eight-hour trip; her parents, however, never complained, and they were positive and uplifting the whole time. When she went to Haverford and concluded that it was a great school with a great program, but also that it just wasn’t the right fit for her, they suggested that they drive across the street to see Haverford’s sister school Bryn Mawr.

Jeanne immediately fell in love with the school.

“That’s been the biggest support for me, is my parents, all the time,” she said. “They’re awesome.”