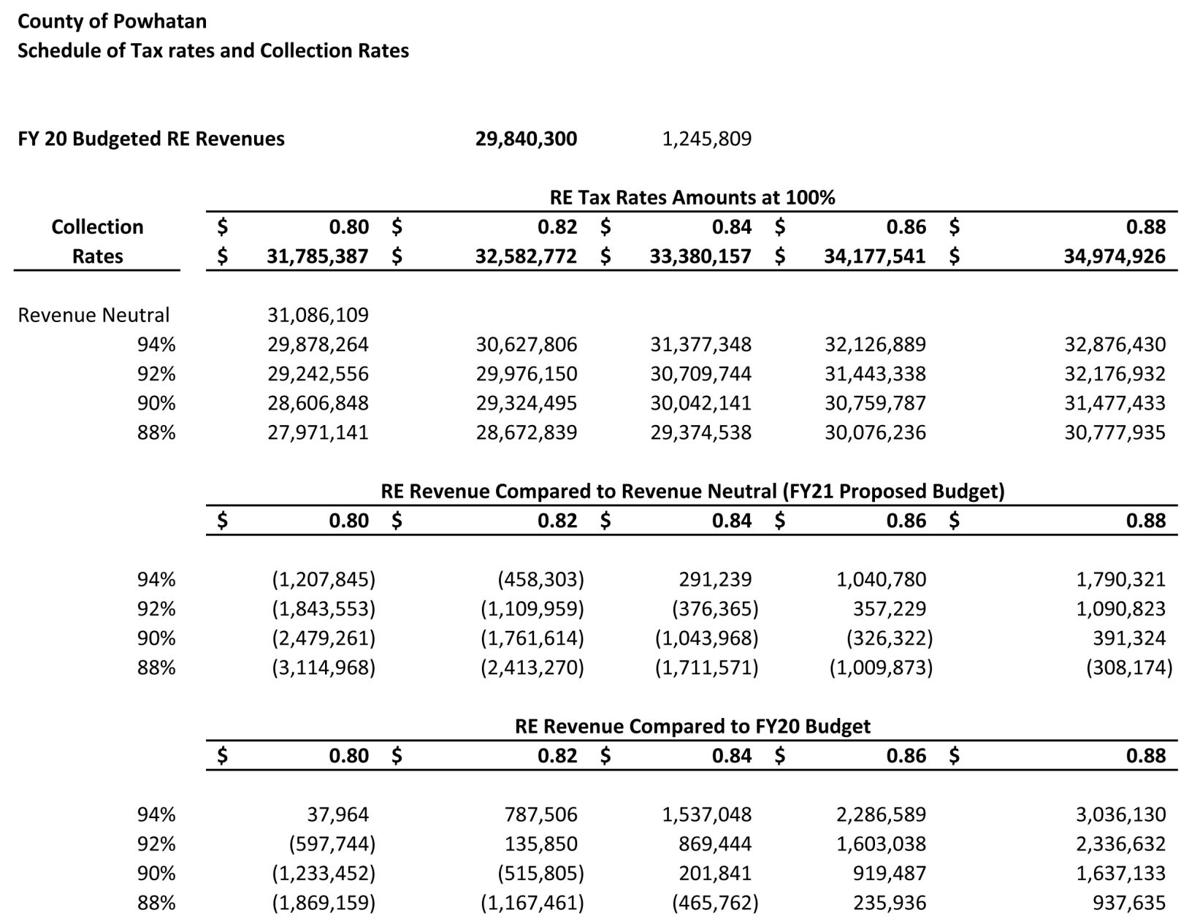 The top chart shows Powhatan’s possible real estate tax revenue scenarios at depending on different collection rates and the tax rate. The second and third charts show the differences in these potential real estate revenues compared to revenue neutral for FY 2021 and the FY 2020 budget, respectively. 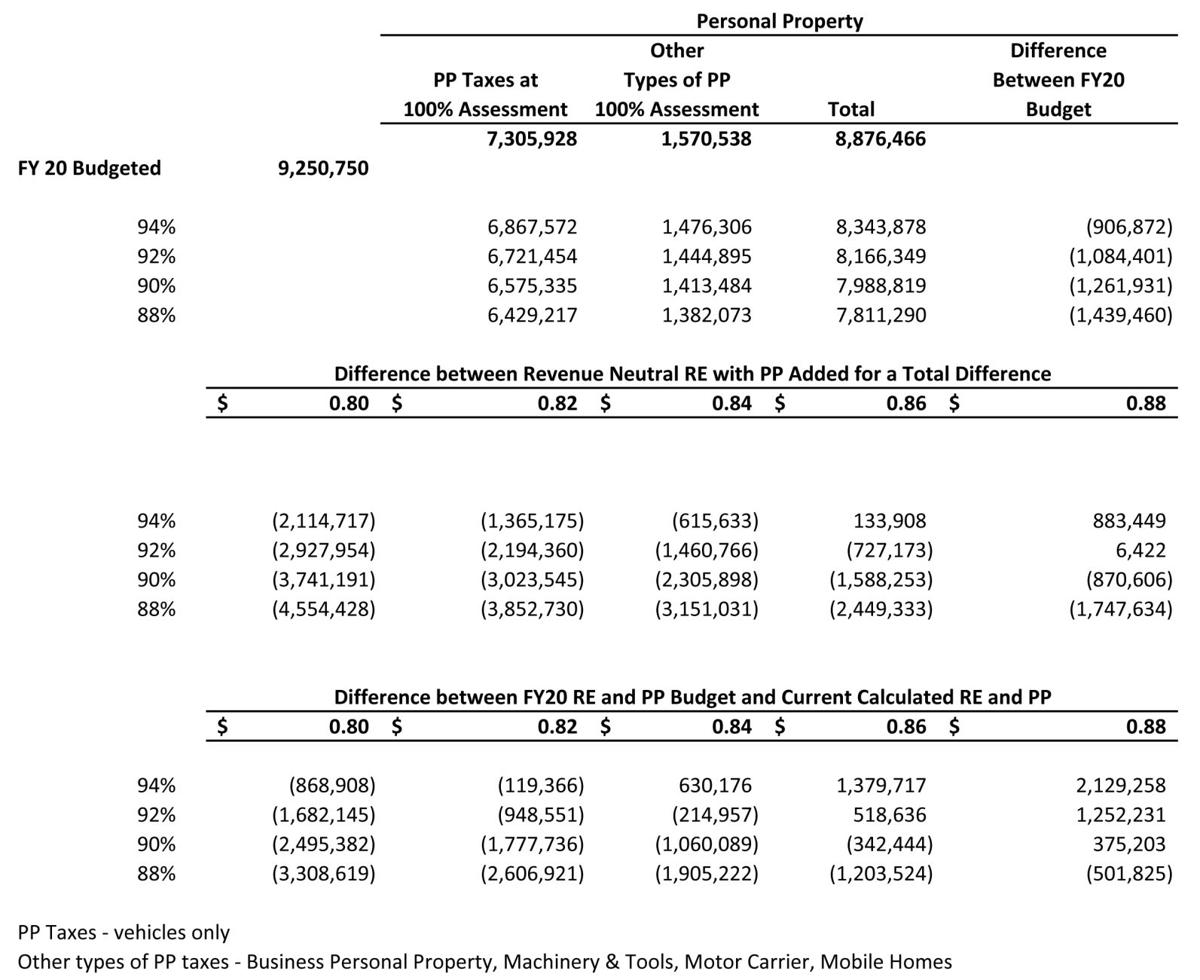 The top chart shows Powhatan’s possible real estate tax revenue scenarios at depending on different collection rates and the tax rate. The second and third charts show the differences in these potential real estate revenues compared to revenue neutral for FY 2021 and the FY 2020 budget, respectively.

POWHATAN – Discussions about county finances continued last week as the Powhatan County Board of Supervisors continues to gather information to help in upcoming budget decisions.

During the board’s meeting on Monday, April 27, the supervisors heard an update from the school division as well as a presentation regarding the county’s real estate tax rate and factors they should consider before setting the new rate in the coming weeks.

In the midst of the uncertainty caused by the COVID-19 pandemic, the supervisors have already said they intend to wait as long as possible to make decisions on the fiscal year (FY) 2021 operating budget to allow time to get the best information they can. They have also recognized that, even after they set a budget, they will have to continually monitor it with monthly or quarterly updates from staff to see if adjustments need to be made further down the road.

Dr. Eric Jones, superintendent for Powhatan County Public Schools, gave a presentation to the board about the school board’s FY 2021 budget, which has to be adopted in May. The school board adopted the current draft of the budget on April 14 with the understanding that it would probably be undergoing significant changes as staff learned more about state and local funding amounts.

Jones’ presentation highlighted the accomplishments of the school division; how it compares with surrounding localities and the state in regard to class size, enrollment, staffing levels, and per pupil cost, and major savings the division has realized on projects and initiatives.

He also pointed out the significant loss of state funds the school system has experienced since FY 2017 as the state increased its composite index, which determines a school division's ability to pay education costs. Raising the division’s composite index has resulted in losing between $572,000 and $750,000 annually between FY 2017 and FY 2022, which adds up to almost $4 million over six budget cycles, he said.

When the school board approved the budget, it included a total increase of slightly more than $1.8 million. A few of the increases are not an option – a 1 percent increase to the Virginia Retirement System and a 10.7 percent health increase. But almost $1.4 million of the increase was slated for items such as a 2 percent increase for staff, additional positions and stipends, adjustments to the insurance family rates, and line item requests, some of which include mandated increases in contracted instructional products and contracted services.

If, as expected, cuts are needed, Jones said that further reductions beyond those areas of increase would likely lead to reducing positions or benefits.

Jones said he has restricted all non-essential spending for remainder of FY 2020, staff continues to identify areas for possible reduction in the FY 2021 budget, and they are waiting for word from the state on how much funding the county will be seeing. Before the pandemic, the school division was expecting to see an increase in state funding for FY 2021 totaling $917,980, but unofficial word they have gotten from the state estimates it will be somewhere between $450,000 and $500,000 less than the current state dollars in the General Assembly’s approved budget.

Jones also said the school board needs to approve its budget by May 15 so it can distribute contracts this month and pointed out a neighboring district has been aggressively recruiting Powhatan teachers.

The board and Jones also had a lengthy discussion about possible savings for FY 2020 with schools being closed. The division has identified potential areas for savings and knows some early estimates where spending might be reduced, such as transportation costs, landscaping, utilities, and substitute teachers. However, staff is still receiving bills from the months where the pandemic started to have an impact, so they couldn’t give many specifics yet. Nor do they know how the pandemic may impact fall enrollment, which will also help determine how much funding the county receives per pupil.

Without pausing, the supervisors flowed the discussion regarding the county’s budget from the schools to the county with a presentation by Charla Schubert, finance director, about the real estate tax rate.

At their April 16 meeting, the supervisors had already started hearing from county staff about how the pandemic’s effect on the economy might impact the local government via revenues and what kind of collection rates they should be considering as they budget for FY 2021. They were offered initial options that had them building a budget around scenarios that saw the tax collection rate as low as 94 percent.

But in last week’s presentation, Schubert presented the board with several charts that presented scenarios with collection rates at 88, 90, 92, and 94 percent. With each of those collection rates, she showed the board what the expected revenue would be at different real estate tax rates, ranging from a low of 80 cents and increasing in 2-cent increments to a high of 88 cents.

In addition to offering a chart that shows how each of these scenarios compares to a 100-percent, revenue neutral collection rate, Schubert offered a chart that calculated how the revenues would compare to the FY 2020 budget. She also offered charts caluclating how personal property taxes could be impacted at collection rates ranging from 88 percent to 94 percent.

“We did this exercise in order to help you see what the revenue would be at a given tax rate at a given collection rate so that we can make that decision of where we want to at least start,” Schubert said.

The board can look at that information alongside possible reductions to local sales tax and other revenues to see where the county stands before making “the tough decisions of what can be funded and can’t be fund based on what we see right now as of today.”

The board will adopt the school’s portion of the budget on May 14. It will hold budget workshops on June 1 and June 15 (public hearing on the real estate tax rate). A public hearing on the budget and fee schedule will be held during the regular meeting on June 22. The board has to adopt its budget, the real estate tax rate, and the fee schedule by its budget workshop on June 29. All meetings are at 6:30 p.m. in the Village Building.