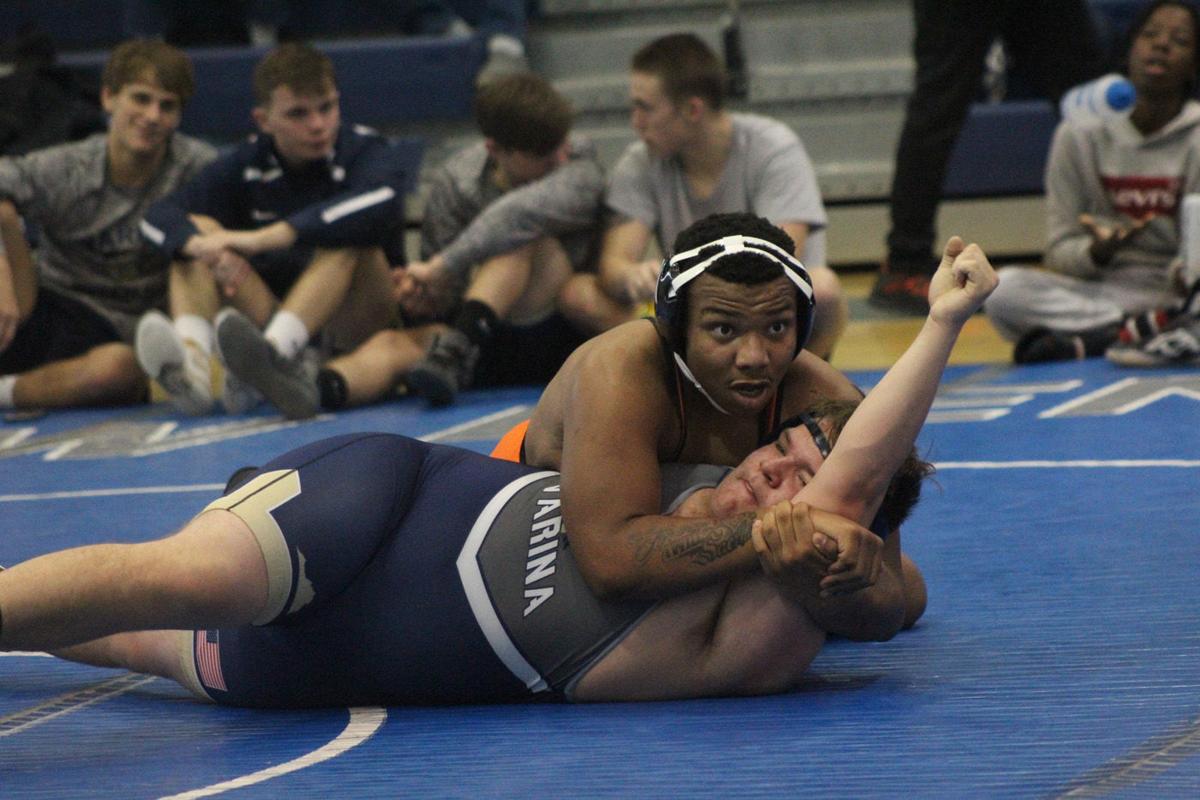 Powhatan’s Linwood Hill works to pin his opponent from Varina in a 220 weight class match in New Kent. 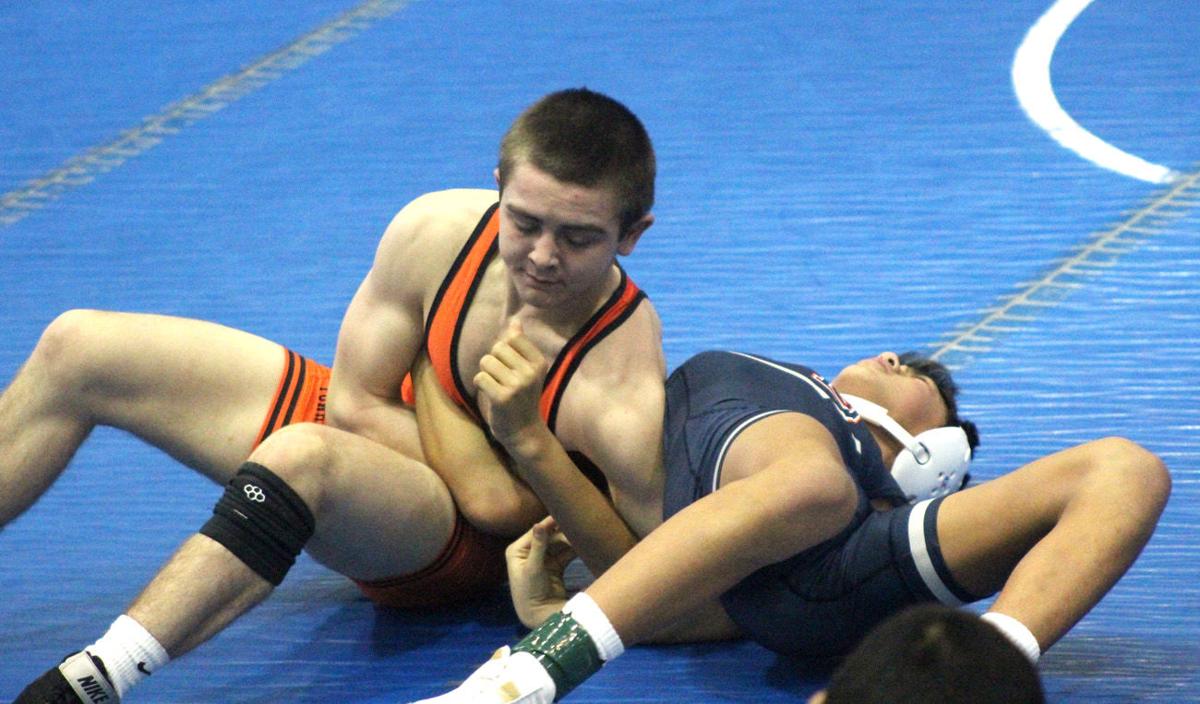 Powhatan’s Linwood Hill works to pin his opponent from Varina in a 220 weight class match in New Kent.

Mitchell Johnson was on his back as his Varina opponent tried to pin him in Saturday’s season-opening invitational at New Kent High School. But the first period’s clock reached zero, and while the referee signaled three points for the near-fall, Johnson, while falling behind 6-2, didn’t allow the pin, ensuring that the match rolled over into the second period.

Johnson got four points off of two penalties and two escapes to tighten up the match, then strung together a takedown and a near-fall to power his way into the lead.

That’s where the sophomore stayed, fending off a last-second takedown to narrowly grab his first varsity wrestling win of the season in a wild, back-and-forth 170 weight class match.

A couple matches before, Johnson’s teammate Luke Wilburn, who had gotten pulled up from JV to get in some mat time, recovered from also being on his back to spin his way to the top and pin his Varina opponent in the 152 weight-class match with 24 seconds left in the first period.

Juniors Sean Hall and Hayden Fitzsimmons both went 5-0. Hall rolled out four first-period pins in his 126 weight class and bumped-up to 132 to wrestle and defeat Varina’s Caleb Olgers by technical fall, 16-1, 45 seconds into the third period.

“Sean’s one of those consistent kids that we kind of know what we’re gonna get, which is awesome,” Tanaka said.

Fitzsimmons, who this year is moving up to the 182 weight class this season, took wins by forfeit against Varina and Lee-Davis and commanded his three matches against Chantilly, Orange and Freeman. He earned his two 182 weight-class wins by pin, then bumped-up to 195 against Freeman and won by pin in the first period.

Junior Linwood Hill, starting at 195 but bumping-up to his former 220 weight class for all but one of his matches, went 4-1 with three pins and picked up a last-second takedown to beat Lee-Davis’ Rob Grace by technical fall (20-5) at 195 in the third period. He pinned his Varina, Chantilly and Freeman opponents, all at 220.

Sophomore Andrew Cheatham recovered from an early loss to go unbeaten the rest of the way at 145. All four of his victories in the invitational came by pin – two in the first period against Freeman and Orange, one in the second against Varina and one in the third against Chantilly.

Sophomore Tanner Palmore, stepping up into the heavyweight class following the graduation of Jarrett Tronge, shined with a couple of early wins. He opened the meet by edging past Lee-Davis’ Joseph Elaal on a 6-3 decision, then pinned his Varina opponent following a takedown 9 seconds inside the second period.

Returning sophomore Dylan Coward defeated his Orange opponent by pin at 113, sophomore Cade Van Buskirk picked up a win against Freeman at 138 and freshman Kieran Hathaway beat his Freeman opponent by tech fall at 106. Johnson earned his first win by pin of the season in the second period against Freeman.

Micah Holt wrestled Lee-Davis in the 220 weight class, but got hurt by an illegal move; it was decided that Holt after getting hit by the move would not be able to continue to wrestle the match, leading to Holt winning by automatic forfeit. Hill wrestled at 220 for the rest of the invitational.

Gavin Timmons, Powhatan’s starting wrestler in the 132 class and a two-time state qualifier, was not at Saturday’s meet as he had a pre-existing commitment to participating in a robotics competition on the same day; he and AJ Gaskins are projected to return this coming week and the team is hoping that freshman Britton Proffitt will return soon.

Powhatan hosts Class 4, Region B opponent Dinwiddie tonight at 6 p.m. in its first home meet of the season and will take on the varsity classic at Lee-Davis High School the weekend of Dec. 19-20.