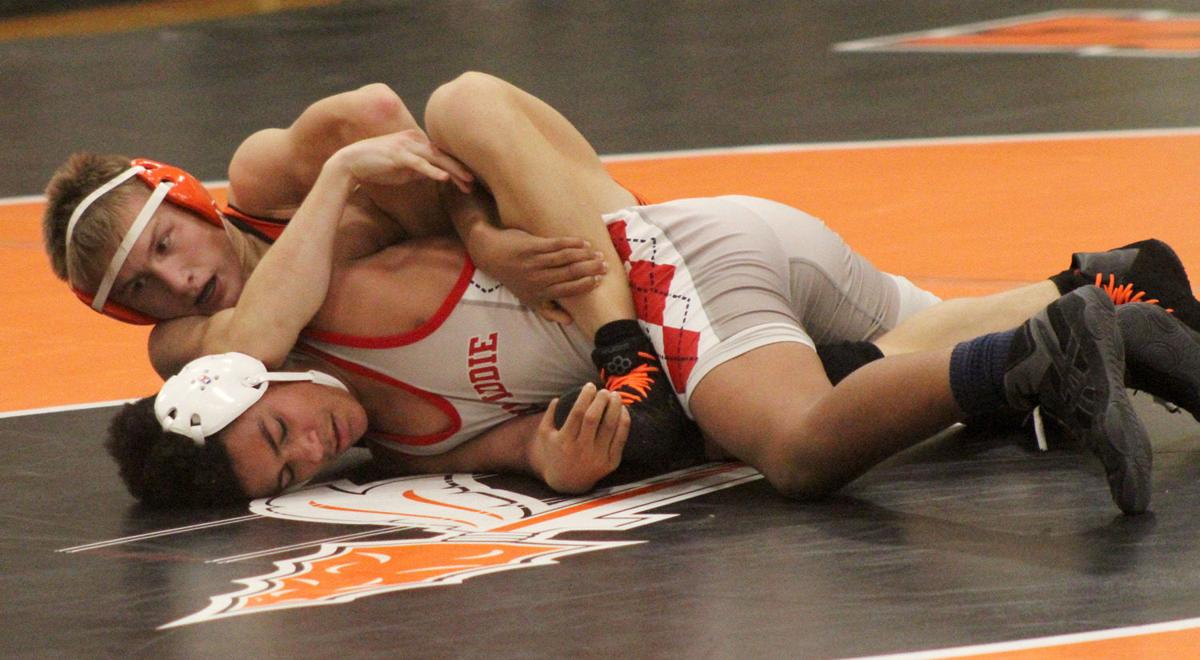 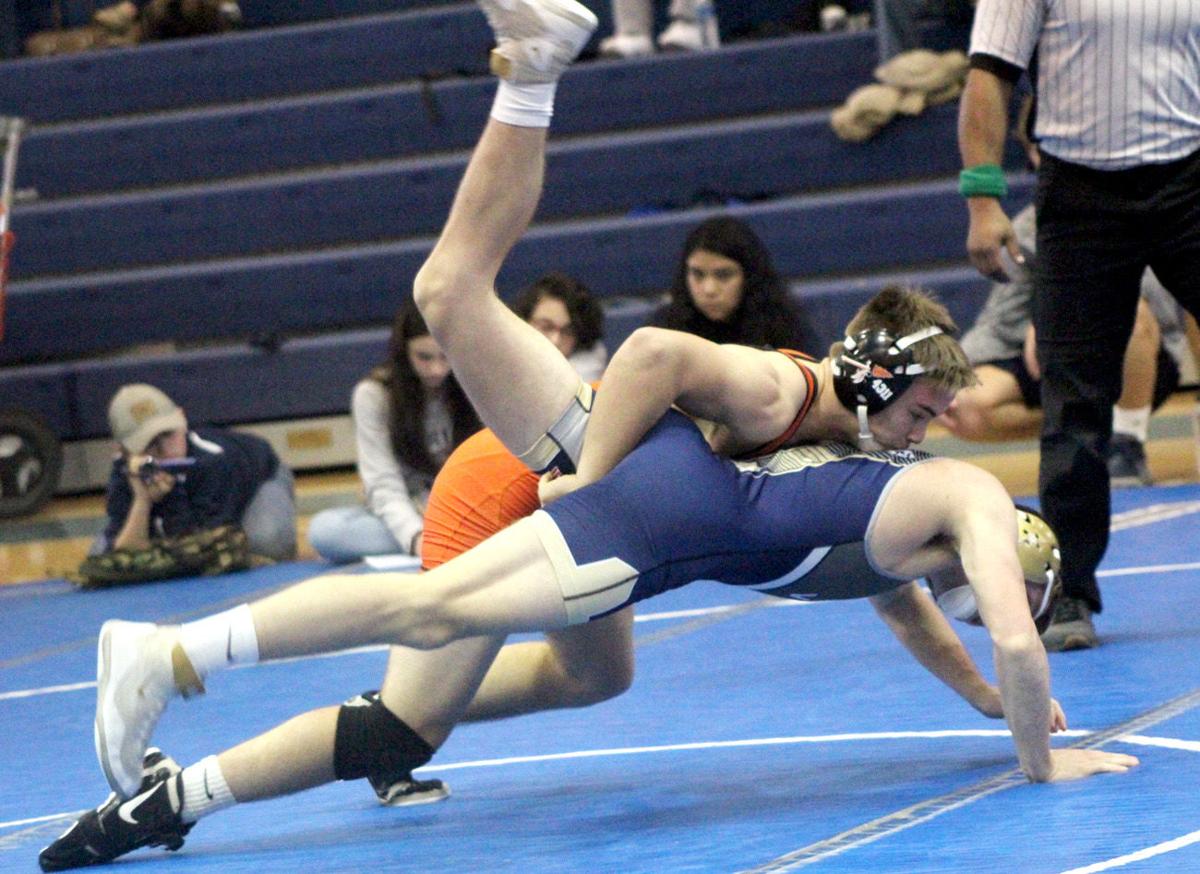 Powhatan's Andrew Cheatham, seen working to bring down a Varina opponent on Dec. 7, 2019 at the Indians' season-opening invitational at New Kent High School, has won five straight matches, all by pin, including once in Tuesday's home opener when he pinned his Dinwiddie opponent in 28 seconds. 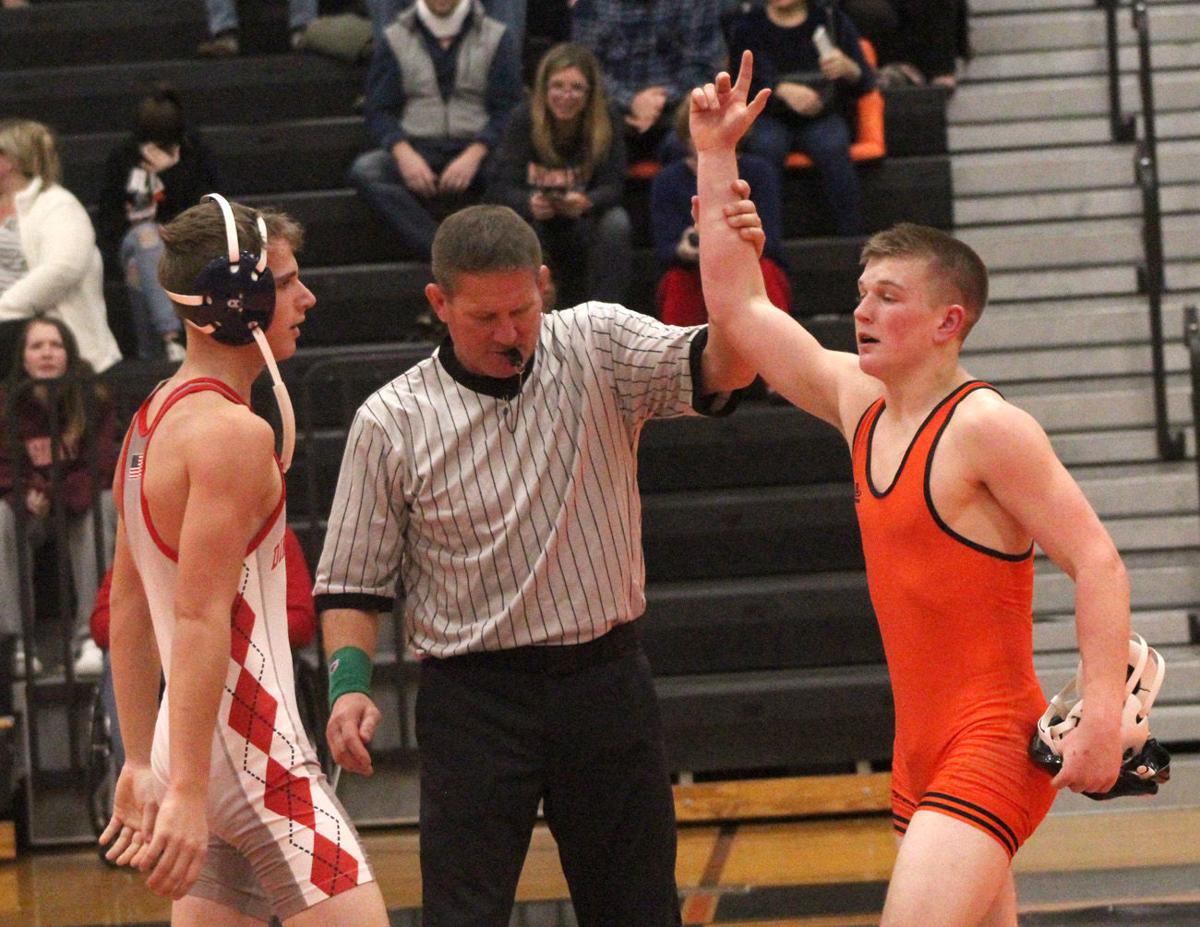 Powhatan's Cade Van Buskirk (at right) has his arm raised after he defeated Dinwiddie's Logan Henley by pin. 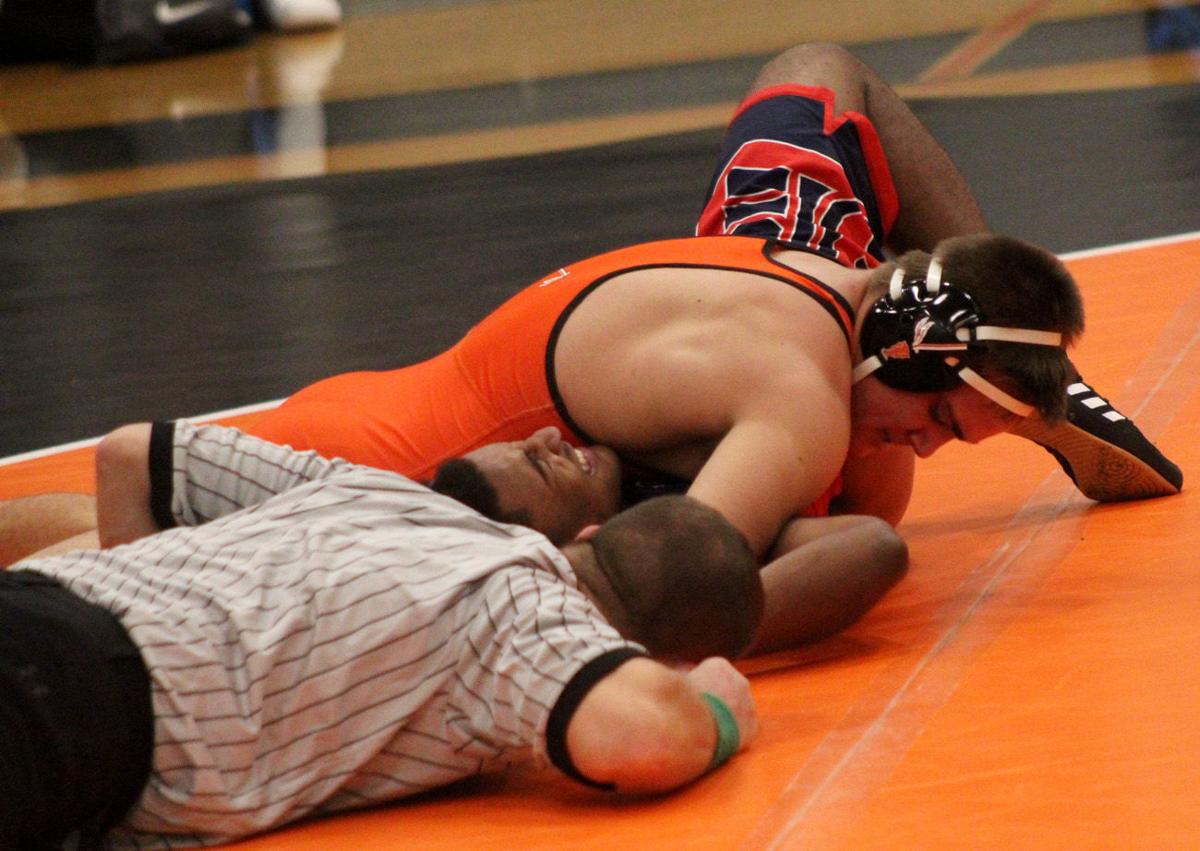 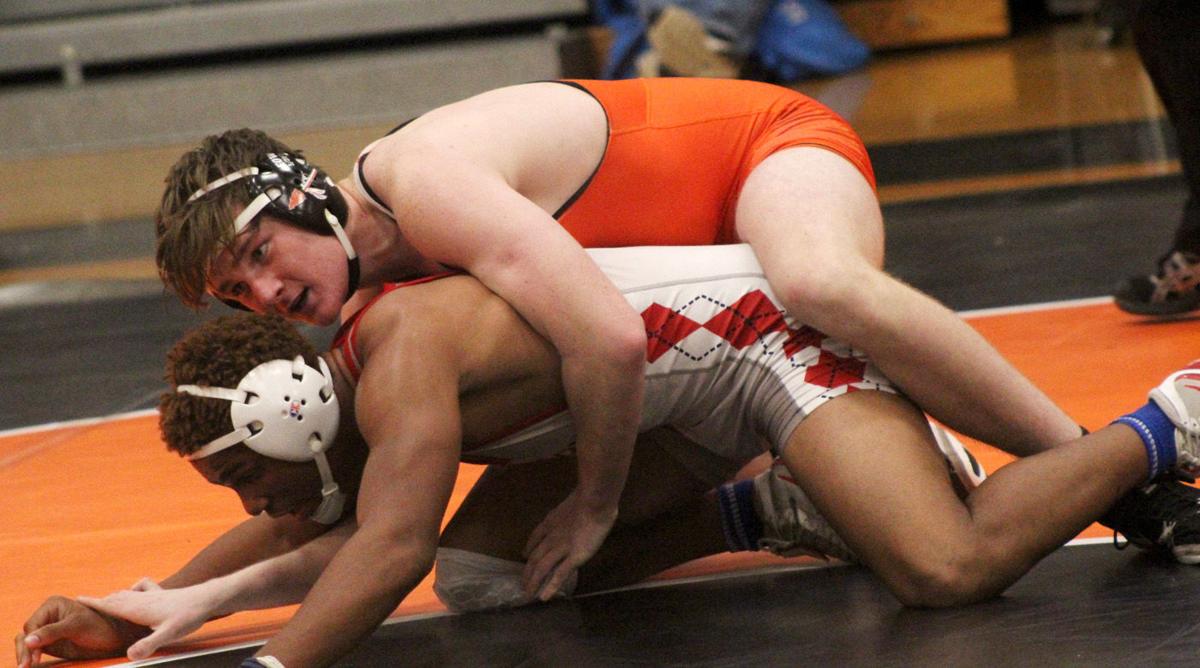 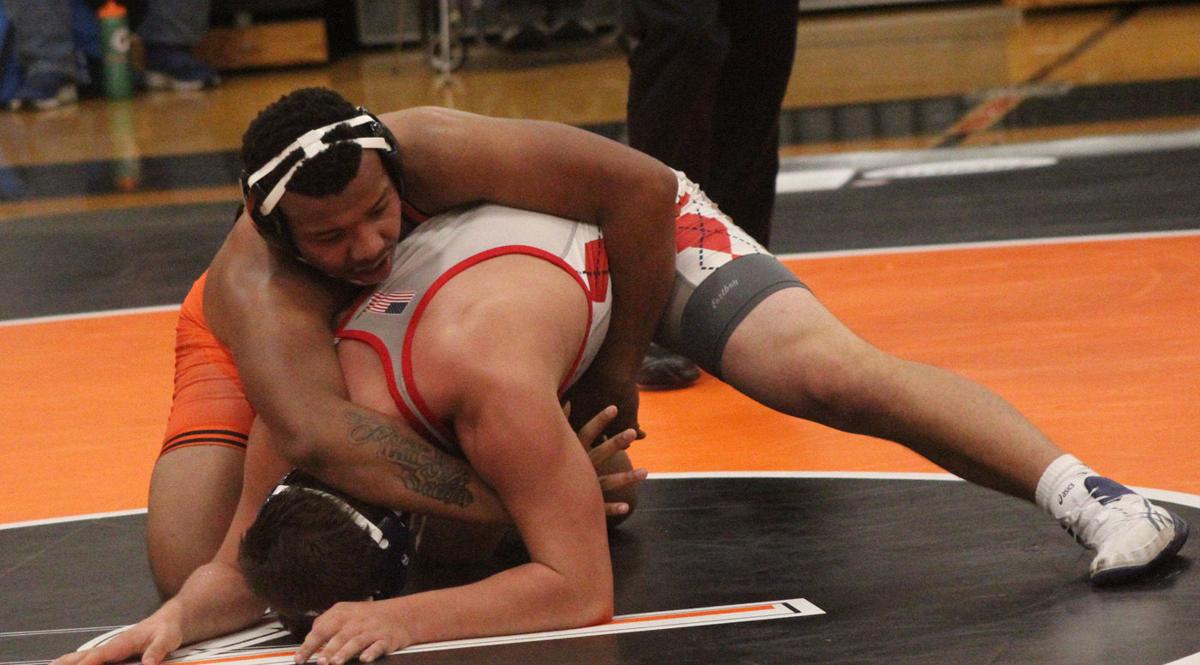 Powhatan's Linwood Hill (above) wrestles Ben Pfister in a match that Hill won by technical fall with 15.5 seconds left in the third period.

Powhatan's Andrew Cheatham, seen working to bring down a Varina opponent on Dec. 7, 2019 at the Indians' season-opening invitational at New Kent High School, has won five straight matches, all by pin, including once in Tuesday's home opener when he pinned his Dinwiddie opponent in 28 seconds.

Powhatan's Cade Van Buskirk (at right) has his arm raised after he defeated Dinwiddie's Logan Henley by pin.

Powhatan's Linwood Hill (above) wrestles Ben Pfister in a match that Hill won by technical fall with 15.5 seconds left in the third period.

Multi-sport athlete Andrew Cheatham had a rough first month of wrestling practice. He didn’t really turn around as fast as he wanted to, his head coach Jonathan Tanaka said.

But when the regular season opened for the sophomore and his Powhatan wrestling teammates in the form of a five-match invitational at New Kent High School, Cheatham turned it around.

He rallied from an early loss to Lee-Davis to end the invite on four straight wins in his 145 weight class, all four by pin.

His team picked him as its MVP.

Cheatham then went into Tuesday's home match excited. It was his team’s first home dual of the season in front of a strong crowd. His brother Colby Cheatham, who last year was one of Powhatan’s state placers, came to the meet after wrapping up his exams at Mary Baldwin.

Andrew wasn’t on the mat long.

He made sure of that himself when he pinned his Dinwiddie opponent in 28 seconds.

Cheatham’s win by pin was one of four made by the Powhatan Indians, who won Tuesday’s home dual, 41-25 over the visiting Generals.

Tanaka enjoyed getting to see the crowd that came out to support the wrestlers at Powhatan’s first home meet, and he said it was good to see Gavin Timmons (132) and Hans Rehme (170) back on the mat.

Timmons, one of Powhatan’s returning state qualifiers, controlled his first regular-season match early before pinning Quinton Mankin. Rehme, also taking on his first match of 2019-20, surrendered an early takedown to Chris Parham, but cut into his early lead with an escape, then got a hold of his leg before taking him down to the mat for two go-ahead points.

Rehme kept up the pressure to pin Parham less than a minute into the second period.

Just as Timmons did so the match before him, sophomore Cade Van Buskirk (138) took command of his match early, riding tough on top before pinning Logan Henley 35 seconds into the second period.

Returning state qualifier Linwood Hill (195) racked up seven takedowns and sprinkled in a couple of near-falls plus an escape to defeat Ben Pfister by technical fall.

Hayden Fitzsimmons squared up against 2019 state placer in Jovante Hobbs in the 182 weight class; Fitzsimmons rallied from going down 4-3 to get an escape and a takedown with less than 40 seconds remaining in the third period. But Hobbs pulled off a reversal moments before the period ended to tie the match at 6-6. The two wrestlers battled through three extra periods and two injury timeouts for Fitzsimmons, but with an escape in the third overtime stretch, Hobbs narrowly won it 7-6.

Despite the loss, Tanaka praised Ftizsimmons' performance against the standout wrestler from Dinwiddie.

"Hopefully that's a good sign to him that he's on the right track - and then just keep training, keep doing what he's doing," Tanaka said of Fitzsimmons. “Really good match for him - very, very impressed with him...Hayden went in there and battled..."

Wins by forfeit for Powhatan went to Kieran Hathaway (106), Dylan Coward (113) and Adam Camp (160). Sean Hall (126), who along with Fitzsimmons went 5-0 in the season opening invite, tweaked his leg a little bit; his coaches held him out of Tuesday’s dual as a precaution. Hall is expected back for the tournament at Lee-Davis, which will be held the weekend of Dec. 19-20.

Tanaka said Micah Holt (220) - who hurt his head when his opponent used an illegal move at the invite at New Kent, and therefore won his only match that day by technical forfeit - is slowly coming around; he's doing a little better, Tanaka noted, and he is in good spirits. There’s no timetable for when he will return, but the Powhatan Indians look forward to getting him back on the mat as soon as they are able to.