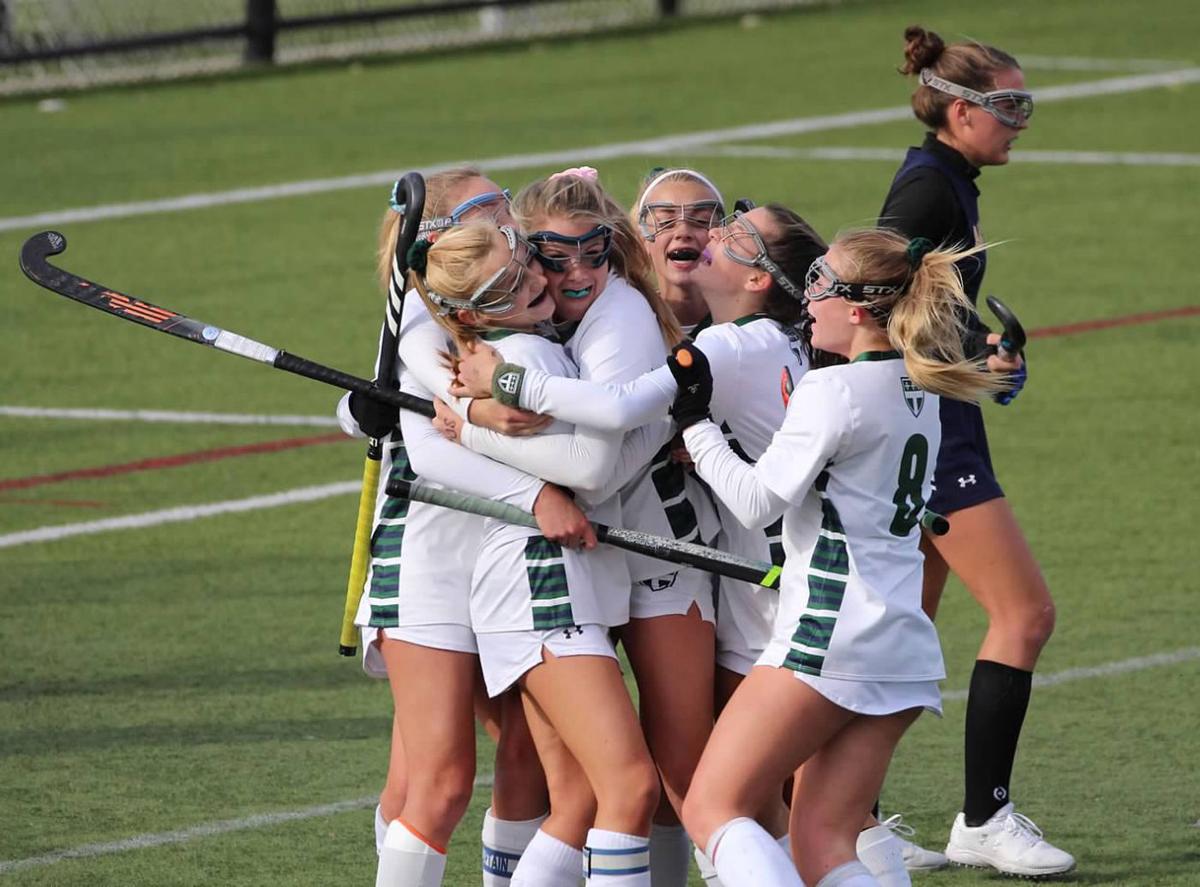 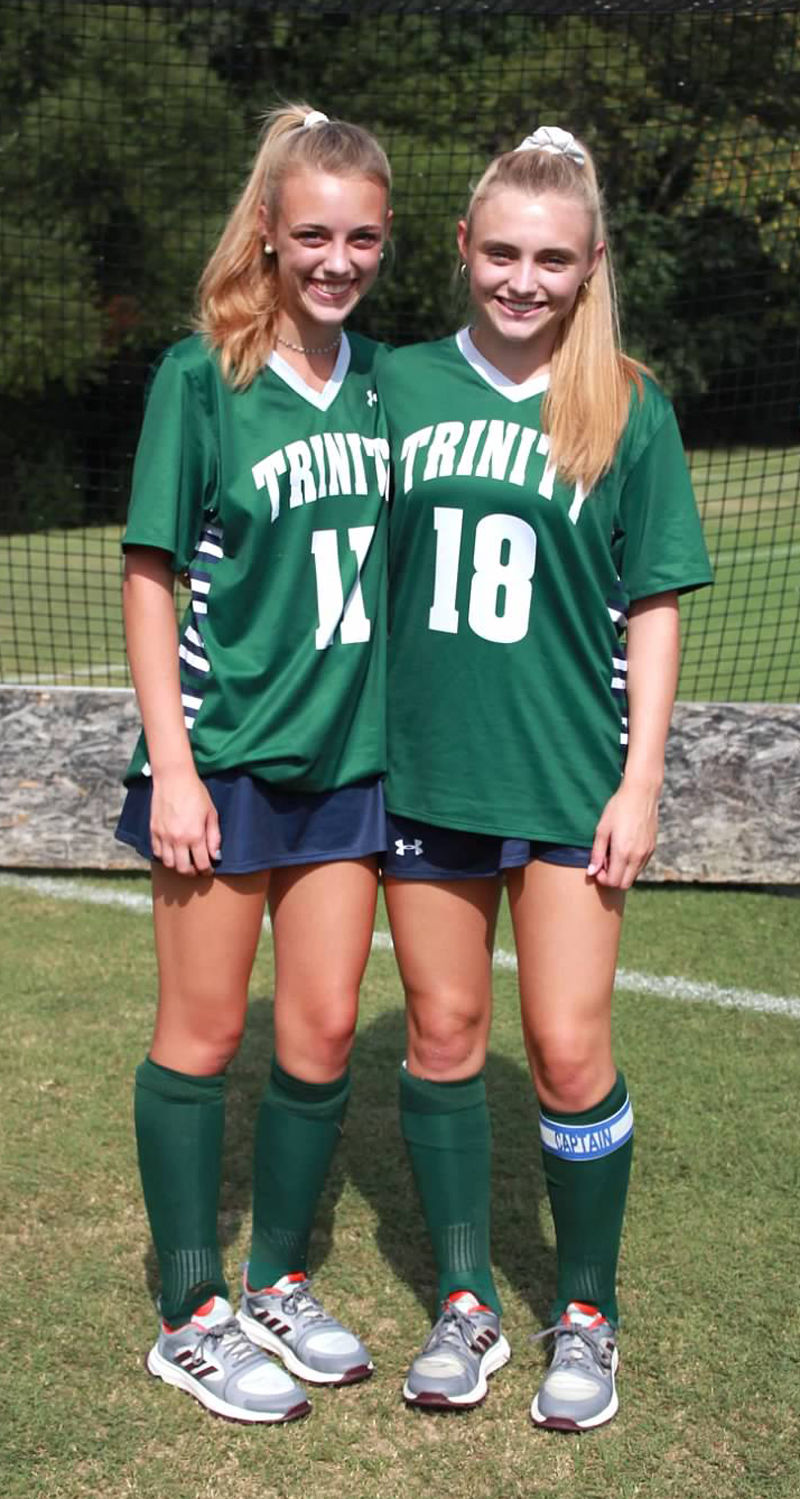 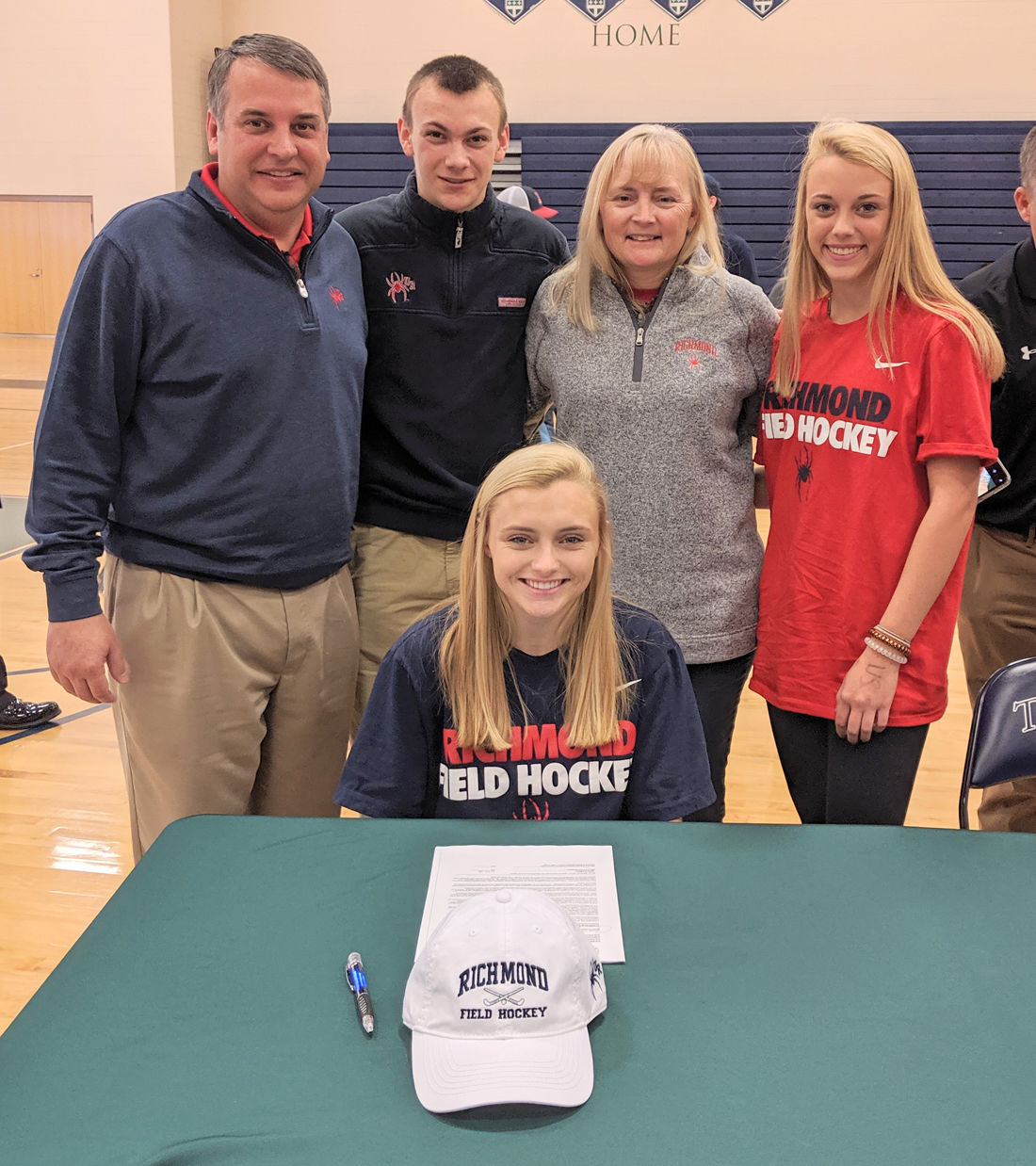 Cori Nichols (seated), surrounded by family, signed her National Letter of Intent on Wednesday, Nov. 13, 2019 to attend and play Division I field hockey for the University of Richmond.

Cori Nichols (seated), surrounded by family, signed her National Letter of Intent on Wednesday, Nov. 13, 2019 to attend and play Division I field hockey for the University of Richmond.

RICHMOND – Cori and Lainey Nichols have now resided in Powhatan for two years, but where they live is steeped in family history. Their dad grew up there, and the street they live on is named Nichols Road.

They’ve also become a part of their school’s history in tremendous fashion. For the last two seasons, Cori, a senior, and Lainey, a sophomore have played together as teammates on Trinity Episcopal’s field hockey team; their mom Heather is on the coaching staff.

For the Nichols family, it’s been a perfect stretch.

Both sisters helped their Titans achieve 44 wins against 0 losses and win back-to-back VISAA state championships in 2018 and 2019.

“Coming into the season, knowing we were state champs, we had a lot to work on and improve and try and keep that title,” Lainey said. “It just feels really good – especially since we are really close…it feels like you’re family.”

“Especially coming out of last season…we felt like we had a ton of pressure, and I remembered thinking: Oh gosh, next year I’ll be a senior; how can we do any better than we already did?” Cori said. “Now that it’s over and we basically matched last year, I cannot be any happier.”

Cori was one of the two players – the other being the team’s leading scorer, First Team All-State Player Mollie Schuma – to notch a goal in Trinity Epsicopal’s 2-0 triumph over cross-town rival St. Catherine’s in the state final.

“It felt good…it being the state championship, there’s a lot of pressure to score and the game was really close the entire time,” Cori said. “We knew going in it wasn’t going to be an easy game; having played the same team so many times, it gets harder to beat them, because then you get used to the other team, how they play and knowing what they’re going to do and adjusting to that. So it felt really good to get that [goal] in, and just having the relief of actually having a point on the board.”

Cori, named the LIS and VISAA player of the year, showed herself to be a great player since she first stepped onto the field, taking on defensive responsibilities early on. Her timing, her instincts and her takeaway skills “are unbelievably strong” according to Trinity head coach Margie Snead.

“In turn, once she gets the ball, she’s very tactical in how we’re gonna transition from a defensive moment into attacking the cage,” Snead said. “Her pace, her choice of skill, where we’re moving the ball – she just did a fantastic job of that.”

Cori was known to her coaches as “The Ninja” in her 9th and 10th grade years because she never spoke – and on the field, she would come out of nowhere. But last year when Cori started playing the center-mid position – sometimes it’s a defensive center-mid, sometimes it’s got more of an attacking component to it – Snead believes Cori started developing a lot of confidence in herself.

Cori often faced the most skilled and talented player on the opposing team.

“She never got lost in trying to take away their strengths,” Snead said. “She was still able to bring what she brings to the table for us, and that’s a hard balance when you’re trying to protect the team from another player’s strengths while bringing your own to the mix, but she did a fantastic job of that.”

Lainey, who played midfield and forward positions, was Trinity’s second leading scorer in 2019. Last year as a freshman, she was a contributor from the get-go, and she started off her sophomore season this year giving her team a lot of offensive power. As the season progressed, the Titans were able to utilize her in a couple of different places in addition to being fast up front with the ability to finish well.

“She’s a strong defender as well, and there were times where we needed her speed and her defensive abilities in the midfield,” Snead said of Lainey. “We always knew we were losing what she could do up top in the midfield, but there would be games where she wasn’t getting enough touches on the ball up top, and moving her to a more midfield position, we were getting more out of her skill set, and in turn as a great midfielder, she provides balls to whoever’s playing up at the top at that time.”

The VISAA state tournament set itself up to be exciting as three of the final four teams hailed from Richmond, including St. Catherine’s in the final and Collegiate, whom Trinity narrowly defeated 1-0 in the VISAA semifinals.

“To have to battle through the teams that we had to to get to that championship just made it that much more exciting,” Snead said, “because we knew that they were formidable opponents and we had to play great hockey to win.”

Trinity still has yet to lose a regular season match or postseason match since 2017, its win streak sitting at 44 games. To Snead, that’s “a little bit mind-blowing.”

But she added: “I think I am most proud of the team for not letting that be a focus as we went through the season…they really did a good job of not fearing a loss – we always talk about all the things that you can learn when you lose a game.”

They would just talk specifically about their style of hockey, what they wanted to accomplish against a particular opponent and just bringing their best hockey in those big moments when it mattered the most.

And if they did those things, that’s what the Titans would call “winning.”

“And then, if it also won the game, that was a bonus,” Snead said.

The team didn’t talk about keeping the win streak going for the sake of having a win streak.

“It just wasn’t a part of what their daily efforts were about,” Snead said, “and that was huge. It took a lot off their shoulders, and I think as coaches, that was our biggest fear: that they were going to carry the weight of the previous season. And this was their season, this was their team and the two groups from last year and this year were very different. To take it game by game is what we wanted them to do, and they were mature enough to do that.”

So while on the outside it looked like the same team winning the state championship again, for this particular mix of girls, that was their first together.

“This year we had a lot of new players – last year Lainey was the only freshman…and she had me, she was already like a part of the team,” Cori said. “We had a lot of different personalities, which makes it really fun and interesting every day.”

“They have confidence in their hockey abilities as individuals and they know that, in trusting one another and using the sum of their parts that, as a team, they can achieve great things,” Snead said, “and that was a given with them.”

Certainly, she added, the Titans had their moments where “everything’s exciting and it’s loud in the locker room,” but “it wasn’t what you felt and saw as you watched them go about doing what they do so well.”

“That was fun to kind of see the changing of the guards and watching these guys step up as leaders,” she said, “and understanding that they could be their own person and that they could be different from last year and they still could have amazing results.”

Snead praised how her players, as focused and hard-working as they are, go about the process very joyfully. She described how all 25 of Trinity’s players are unique and different – they have different interests in other things with which they’re involved at school – and they all come together as a fun group.

“That fun factor is a big part of it,” Snead said. “I don’t think we could be doing what we were doing if they weren’t enjoying the process.”

She also felt very lucky to have a team of players who spend a lot of time outside of the season on their hockey, building up consistency in the fundamentals. And they push each other in practice.

“I think the fact that they’re as talented as they are really is what brings out the best in each other,” Snead said. “And they don’t mess around in practice, and you don’t want to lose in a drill. It’s no joke, and they’re getting as much competition on a practice day as they do on a game day.”

The players are really close; most of them play for the same club team outside of the high school season.

“We’ve played with each other for years, and then coming to school – having the school relationship, seeing each other at school – it kind of just brings a different aspect to the team,” Cori said.

While Lainey is excited to help the underclassmen over the next two seasons in her junior and senior years at Trinity, Cori next year will remain close to where she delivered a memorable high school career, as she will attend and play Division I field hockey for the University of Richmond. She’ll graduate having shared the joy of winning both state championships with her younger sister Lainey.

“It’s going to be really weird not having this team next year because I’ve been playing with Lainey and all these people for so long; the change is going to be weird, but it will be exciting,” Cori said. “There’s so many different personalities, so every relationship you have with each player is different, and knowing that and being able to talk about different things and communicate differently is definitely something that I’ll take away from the season.”