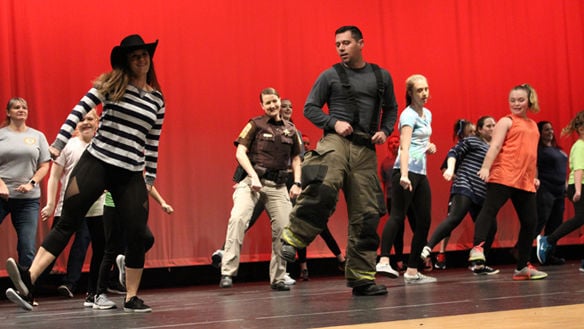 Stars in Motion dedicated its Winter Gala to honor local first responders and raise money for the sheriff’s office. Owner Sara Christman taught some first responders so they could join in a dance during the show. 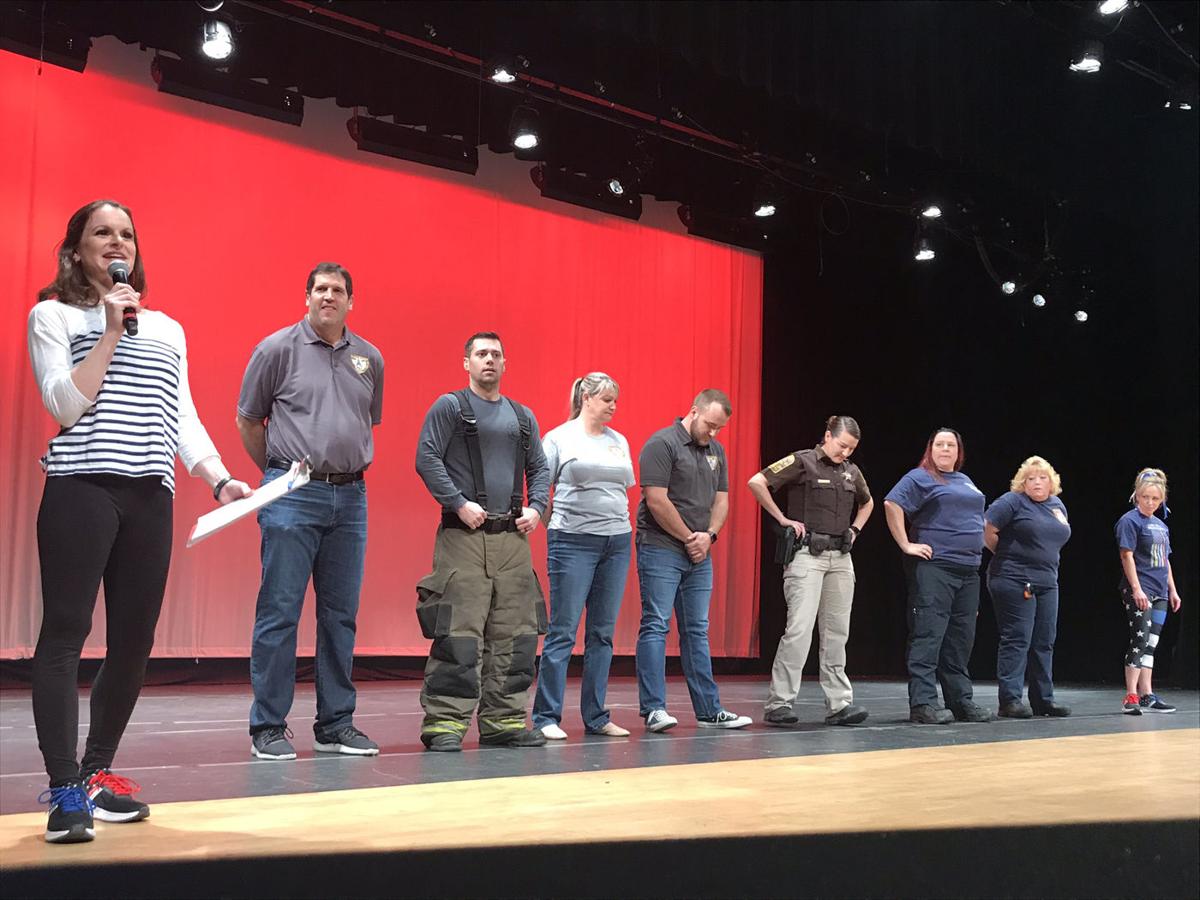 Stars in Motion dedicated its Winter Gala to honor local first responders and raise money for the sheriff’s office. Owner Sara Christman taught some first responders so they could join in a dance during the show.

POWHATAN – Tom Nolan said his feet are big enough to supply four left feet, so stepping onstage in the auditorium at Powhatan High School to do a dance in public was a bit nerve-wracking.

When a call went out among local first responder agencies in the county to participate in a dance number at Stars in Motion’s seventh annual Winter Gala on Jan. 12, Nolan, who is director of the department of public safety communications, said he wasn’t sure he was ready to sign up. If he had known he would be dancing in front of more than 400 people, he admited he doesn’t know if he would have volunteered.

But the knowledge that the Powhatan-based dance school wanted to honor local first responders during the event convinced him. And when he and several other first responders were doing “The Git Up” along with a larger group of dancers, he found himself having a great time.

“I felt good. I was nervous at first. I saw all these young kids dancing and they were really good. When you do an organized dance that is choreographed, you don’t want to be the only one going left when everybody else is going right. I felt like I went in the right direction and I moved in the right way, for the most part,” Nolan said. “Having so much support from the crowd and Jaime (Walter), it made me feel good about it. I have never done anything like that.”

Sara Christman, owner of Stars in Motion LLC, said she started the gala seven years ago for two reasons – to give her competitive dancers a performance opportunity before their season started and to do some community service at the same time.

So, each year, the school chooses a different group or cause to receive the proceeds from the event. For this gala, she approached Jaime Walter, originally thinking to do something in honor of her husband. But Walter, whose daughter dances at the school, suggested instead that the event honor all first responders and raise money for the sheriff’s office.

“She was like, ‘What if we could actually get some of them to dance with us?’ So I just made it happen,” Christman said. “It was our first time doing something like that, and it worked.”

They decided to title the program “Brave” in honor of the way first responders go out and take care of the community.

Christman offered the first responders several practices at the studio and they made a video so the dancers could practice at home. Not everyone who originally signed up made it onstage last week, but Walter said she appreciated that the ones who made it seemed to have a good time.

“I think they were a little intimidated because of the dance and being onstage. Everybody that did end up performing really knew it was all in fun. Every time we met it was all in fun,” Walter said.

She added that she had to fight the same fears since she danced for 14 years in the past but hadn’t been onstage in many years. She commended the job Christman did on the entire show, but especially in the way they honored first responders.

“It was a good cause and I think that is what made it even more special,” Walter said.

Nolan said he couldn’t make it to all of the practices at the studio but recalled one practice session he and some of the other dancers held in the sheriff’s office’s sally port that was caught on the security tape and used to tease them the next day.

“I don’t think I will ever be on ‘Dancing with the Stars.’ It is too much work,” Nolan said with a laugh.

Barden said she thought the dance and the event as a whole offered a neat and creative way to honor first responders.

“It was a fun thing to do aside from the seriousness we deal with day to day,” she said.

She added that she appreciated how patient Christman was working with the dancers and thought it was a nice gesture for her studio to honor them in that way.

In addition to the special dance, the Metro Richmond Police Emerald Society performed before the show to entertain the crowd.

The show also featured 150 performers of all ages performing 46 routines, Christman said. The dance students worked hard to put on a good show and do the cause justice.

Sheriff Brad Nunnally said the money the gala raised is used as discretionary funds by his office. Sometimes those funds are used for extra training or to buy equipment. He also uses discretionary funds to hold an annual family day for the office at the Powhatan Rescue Squad Grounds. This year, he said he is going to open the picnic up to other first responders to show his appreciation for what they do.

Nunnally said he was grateful for the dance school wanting to honor his office and other first responders with their show. Actions like that mean a great deal to his deputies, and it is motivating for them to receive that kind of support.

“It is so nice to work in and work for a community that is supportive of their first responders. When our guys feel like they are part of the community, not just in it, they take ownership out here,” he said. “They want to do good work. They want to do a good job. They want to go out and be the type of law enforcement that the citizens expect in the county and that they will appreciate. (The citizens) showing their appreciation is great for morale and helps the guys realize the county supports us and they want us to do good work.”