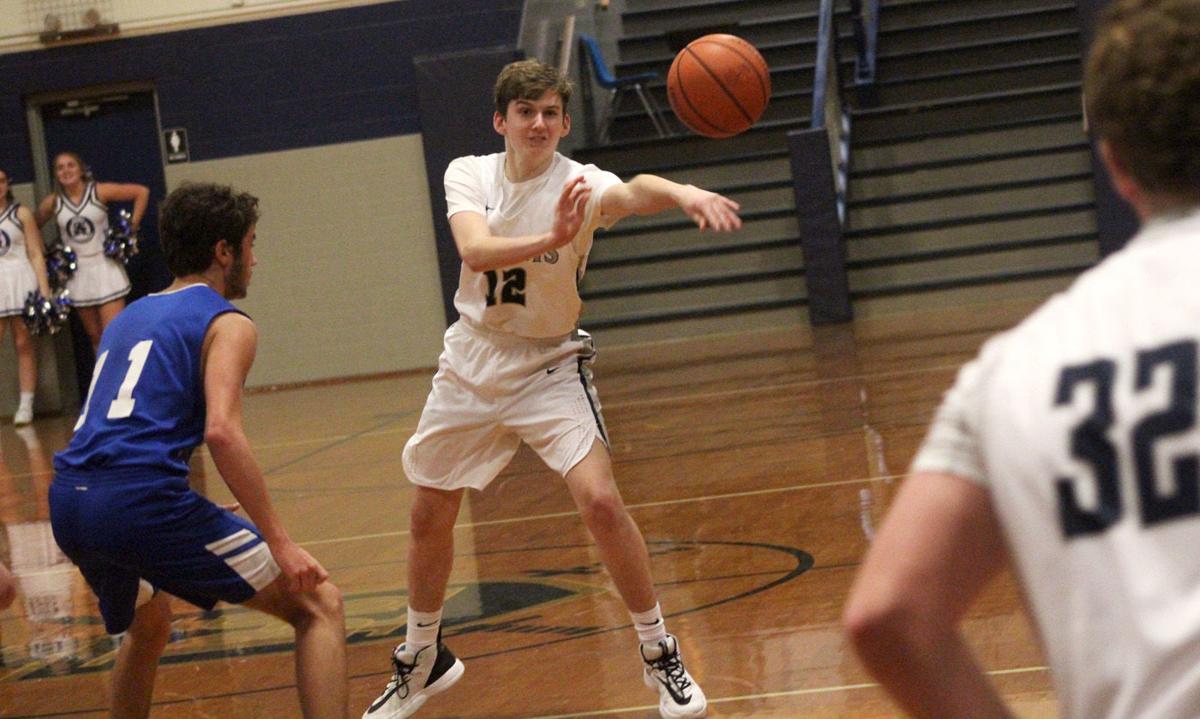 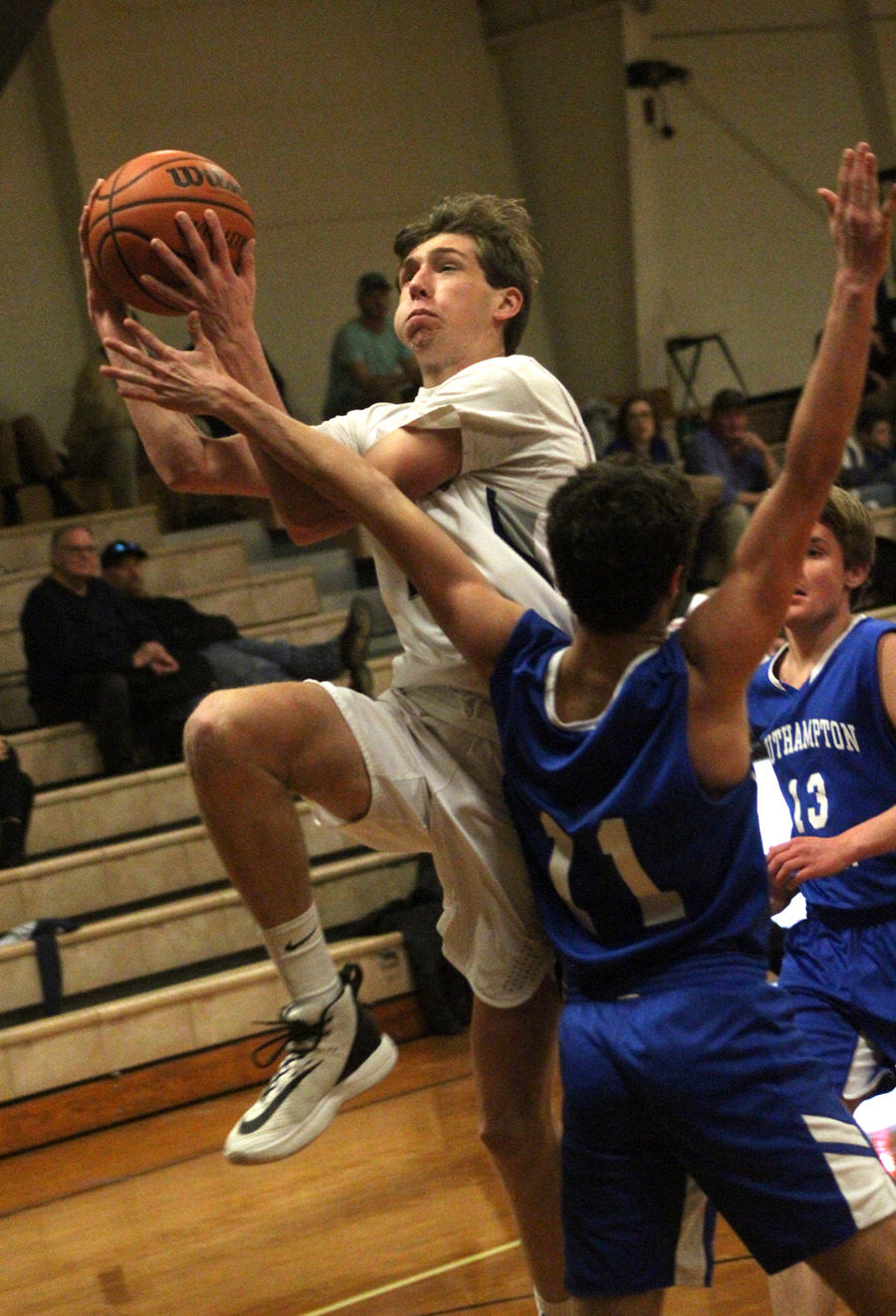 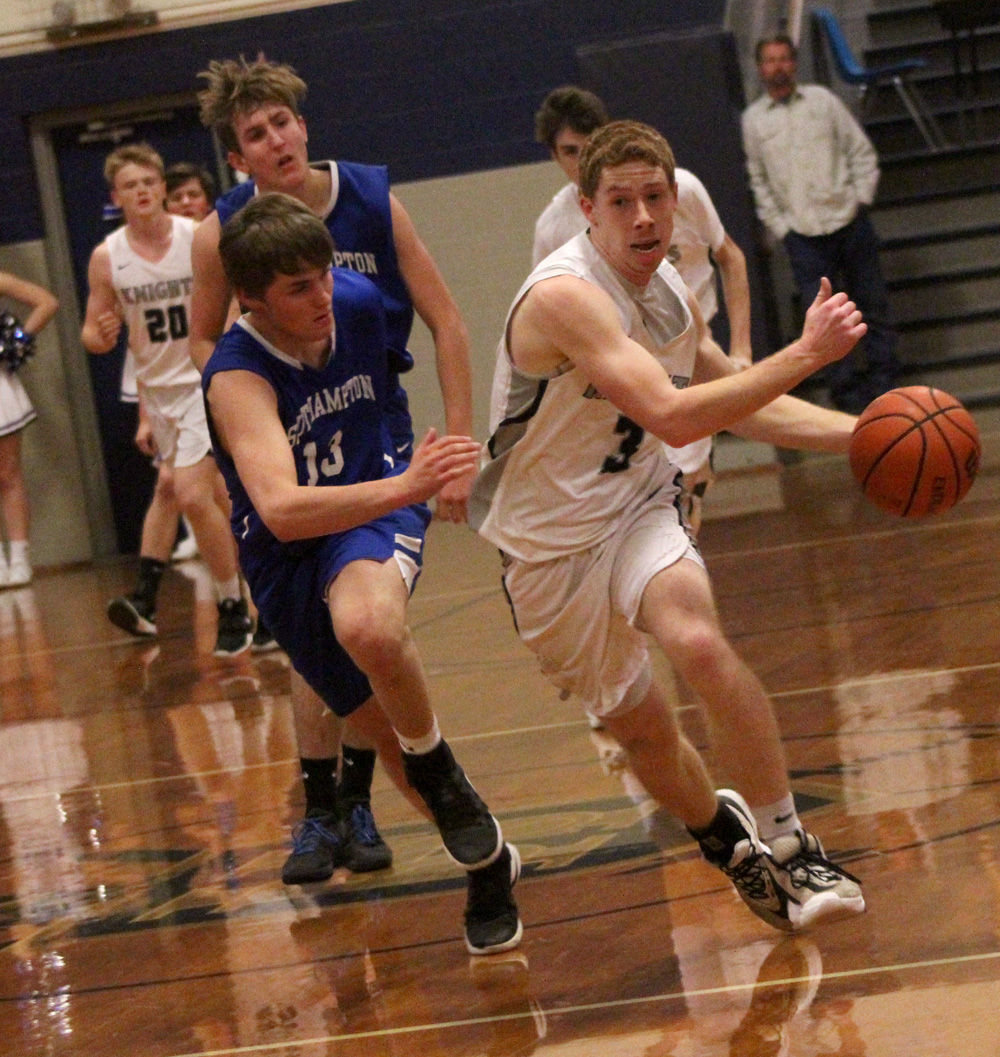 Blessed Sacrament Huguenot's Raymond Avery (3) drives the ball across the court in the Knights' home game versus Southampton Academy on Tuesday.

Blessed Sacrament Huguenot's Raymond Avery (3) drives the ball across the court in the Knights' home game versus Southampton Academy on Tuesday.

POWHATAN – When he goes for the 3-point shot, Blessed Sacrament Huguenot junior Henry Kiefer tends to launch the ball with a notable long extension of one arm.

“He’s got a pretty shot,” BSH head boys basketball coach Chris Hamner said. “He’s had it ever since I’ve known him, in fifth or sixth grade, and he loves to shoot. He’s never seen a shot that he doesn’t like, that’s for sure.”

He saw three of his 3-pointers swish cleanly through the net on Tuesday night, and he totaled 11 points in his BSH Knights’ 55-34 win over visiting Southampton Academy. He was the third leading scorer on his team behind seniors Raymond Avery and Robbie Kurtz, who netted 17 and 12 points, respectively.

From crashing the boards to limiting the visitors’ looks early with lockdown guarding, the Knights’ defense made scoring a mountain climb for Southampton Academy, who was also struggling with finding its jumpshot inside the arc during the opening stretch.

Sophomore Zander Nadeau totaled 11 blocks, which included deflections that altered the visitors’ trajectories on their shots and short-circuited their layup attempts.

“We protected the rim very well,” Hamner said. “We did kind of let them get to the rim a little too much, but they’re good – they’ve got a zone system where they go high, low and we worked on it yesterday. It’s hard to defend. Luckily for us, Zander was there to protect the rim for us.

“We can play better than we did defensively,” Hamner added. “But we did enough to get the win, which is huge.”

BSH seized momentum early on Avery’s back-to-back 3’s– with both shots set up by defensive rebounds – and the home team continued to pull away by attacking the net in a variety of ways. Both Kiefer and Ben Newton knocked down 3-pointers, Nadeau added a putback and Avery chipped in a couple of points from the line to comprise a 10-0 run for the Knights in the second quarter. BSH led Southampton Academy 31-12 at the half.

“The one good thing to know is, with a senior-led team, you know they’re going to show up and play hard, so you don’t really have to worry about that too much,” Hamner said. “They did a little tricky thing defensively on us where they just kind of sat some guys in the lane and left some guys wide open, and we follow ‘next guy up,’ where we just go to the next guy. We’ve got a lot of shooters on the team and we went to the next guy. It happened to be Henry and…he got hot and knocked down some huge ones for us.”

The Knights also received a spark from Adam Angle, a junior who transferred in from Monacan High School. He showcased his speed throughout the contest and scored all 6 of his points from the free-throw line.

“His energy is helping us more than anything right now,” Hamner said of Angle. “His energy that he brings to practice and in the huddle and in the games is something that we were maybe – I wouldn’t say lacking – but we needed more of, and he is bringing it, and he brings a lot of it."

The Knights (8-4) will next take on Amelia Academy in back-to-back 7 p.m. games, with Amelia hosting on Thursday and BSH hosting on Friday.

“The progression of the program at BSH has just come so far. We started building it with Robbie and Raymond as freshmen and it’s just come along,” Hamner said. “And now it’s nice to see how guys have chimed in and know their roles and…even if Robbie and Raymond have an off-night, we’ve got other guys that are ready to step up. It’s nice to see as a coach, and I know our guys love it. Our guys love it when the other guys come in and knock 3’s down. They’re a very unselfish team, which is really nice to coach.”