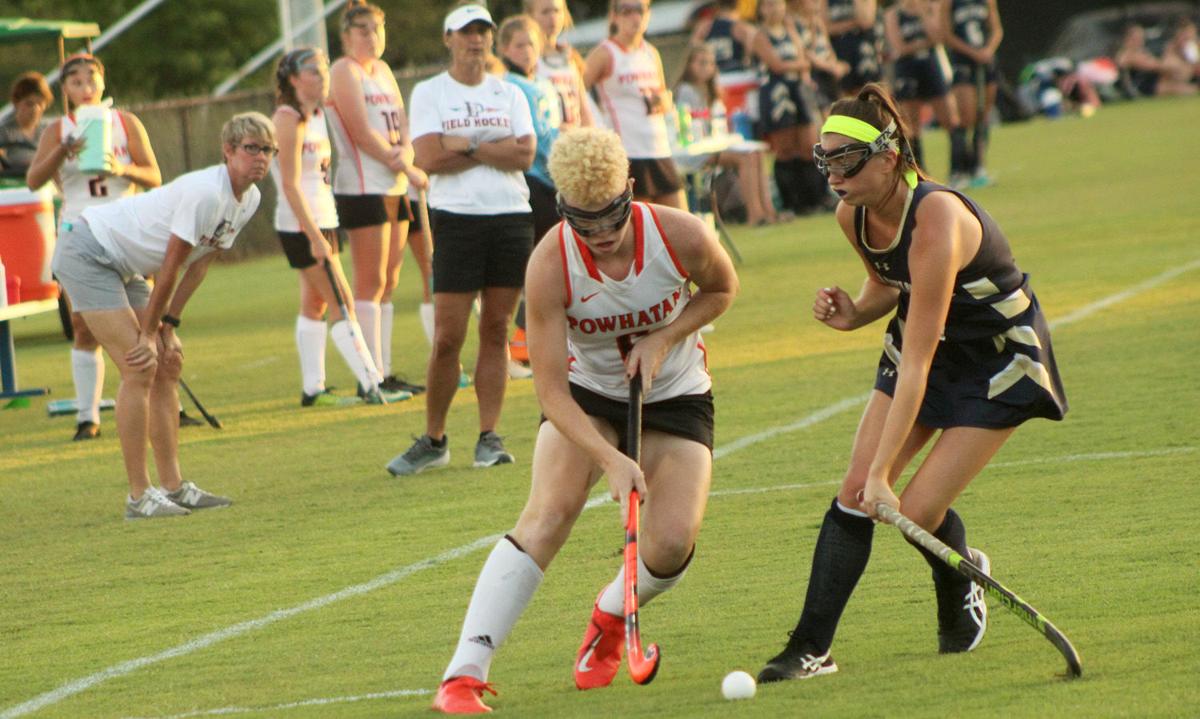 Powhatan’s Michala Taylor (center, foreground) controls the ball while a Midlothian defender battles her for possession, and Taylor’s field hockey coaches and teammates look on in a 2019 regular season contest. 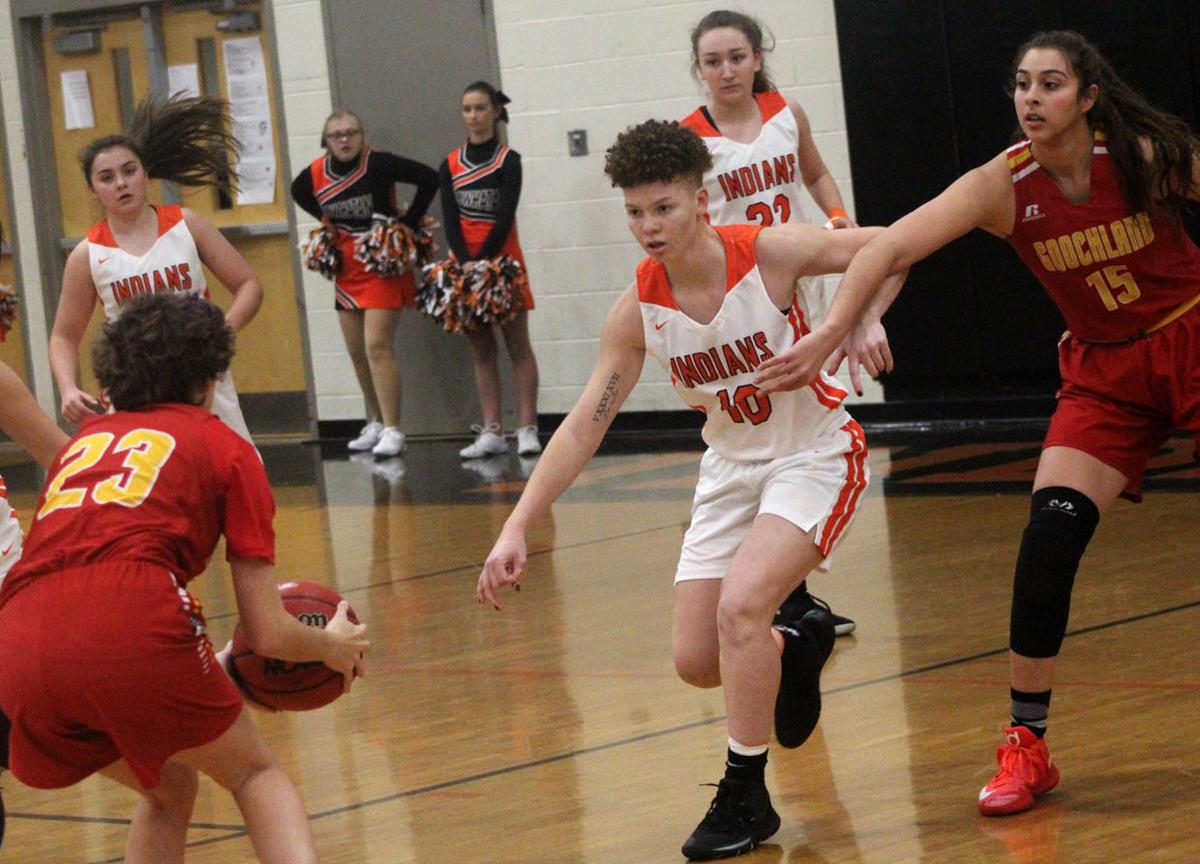 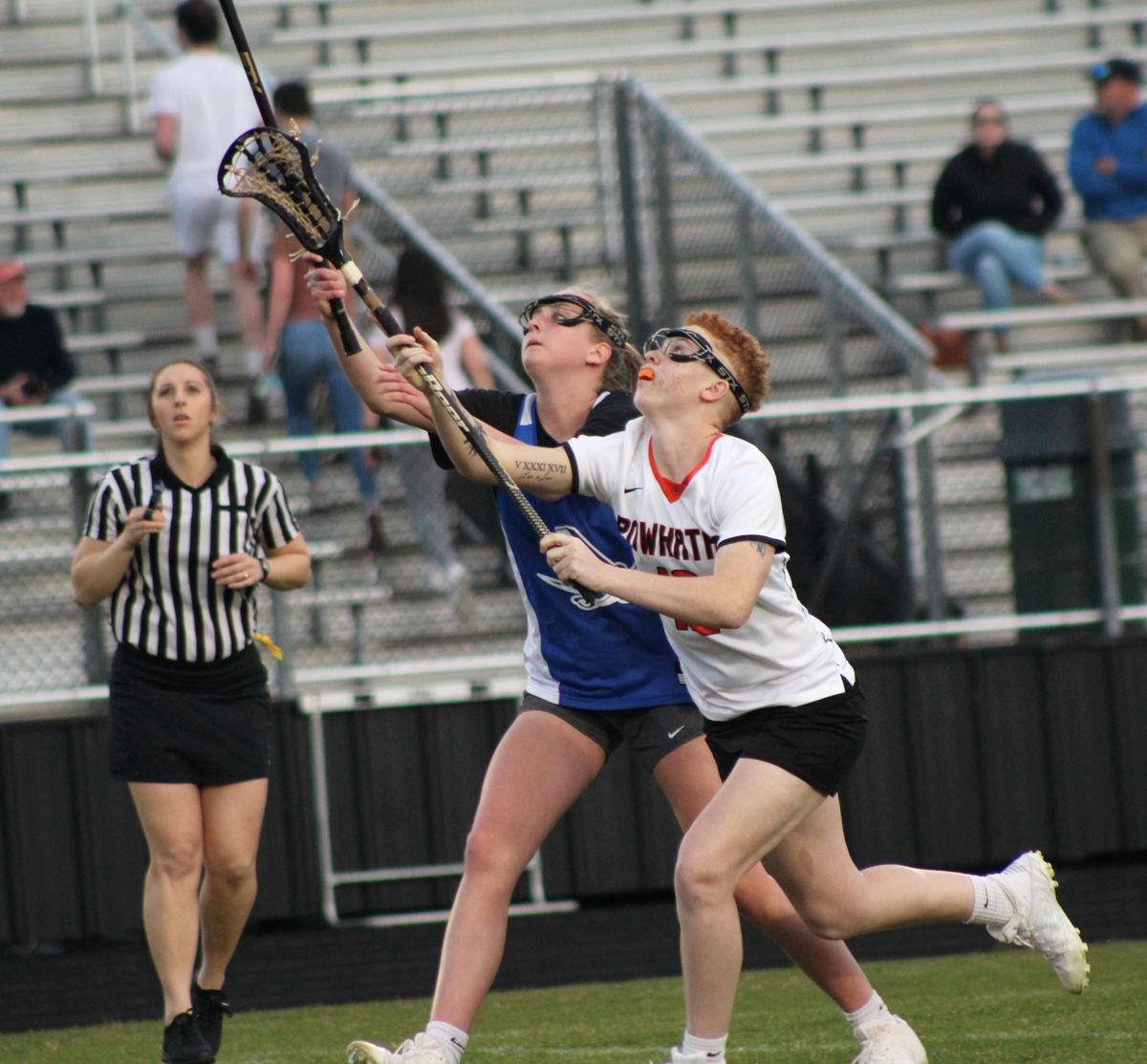 Powhatan’s Michala Taylor (center, foreground) controls the ball while a Midlothian defender battles her for possession, and Taylor’s field hockey coaches and teammates look on in a 2019 regular season contest.

POWHATAN – If you name a sport, chances are high that Michala Taylor has played it.

The versatile Powhatan High School athletic standout played soccer, ran track, tried volleyball for a little bit and also competed in baseball and softball. And if you count the annual Powder Puff games that are part of the Homecoming week tradition at Powhatan High School, you can say she’s played football, too.

These past couple of years, she’s competed in field hockey in the fall, basketball in the wintertime and lacrosse in the spring. She’s been a key contributor to wins in all three.

“I just fell in love with the field – the field is where I love to be. It’s my home…and I love basketball, don’t get me wrong, but I just like to run fast, and just the adrenaline of being on a huge team,” Taylor said. “It’s truly: everything involving a field is a team sport, because you can’t get down a hundred yards without the need of someone else. You just have to have that dependable attitude, and you have to be able to lean on your teammates, and that just helps me a lot off the field.”

And when it comes to field hockey, “there is nothing better than hearing that ball hit the back,” Taylor said with a smile.

That’s a sound she’ll look to keep hearing in college, as Taylor will attend and play field hockey for Virginia Wesleyan University in Hampton Roads. Making her commitment and knowing where she’ll be going has given Taylor more confidence to guide the younger players and show them that “if you put your heart into it every season, every practice, every workout, it does pay off.”

“It’s just good to have that feeling, to know that they can look up to me,” she said. “I remember being younger and looking up to Kylee Maiolo, and when she committed [to Randolph-Macon to play basketball], it was like the biggest thing ever to me, and whenever I didn’t want to do anything – whenever I was down – I’d always think about her committing and wanting to be in that same spot, so it’s nice to finally be here.”

After applying to about a dozen colleges, going on tours and reaching out to the field hockey coaches, Taylor saw that she had a real connection with Virginia Wesleyan’s Christina Walker, who reminds her of her Powhatan head field hockey coach Stephanie Tyson.

“I went up there and toured – it’s a beautiful campus – and I fell in love with the team,” she said, “and so I just went ahead and committed.”

Taylor was in eighth grade and playing soccer on the JV team when coach Tyson encouraged her to come play field hockey.

“The first day, I came to camp and I didn’t have a stick – I didn’t have anything – and she handed me a stick and she asked me to do one pull,” Taylor said, “and I don’t know how, but I just did it right, and right then, she literally sent me over to the varsity group and she was like, ‘You better get the hang of it, because you’re going to be on the starting field by the time the game starts.’

“I just did what I was told,” she said laughing.

Competing across various athletic disciplines has taught Taylor that, “you’re not going to be good at everything, but if you try your hardest, then that’s all that matters.”

“It’s easier for me to keep my calm in games knowing that: ‘Hey, I’m not the best one out here…I can learn more,’ and playing different sports, I have to learn something new every single year,” Taylor said, “so I know, when I’m coming back to field hockey, that I can still learn something new. If I’m 16 and 17 years old and picking up a brand new sport, I know that there’s so many more factors left in the sport I love the most that I can still learn.”

It also makes you better off the field, she added.

“It helps me handle situations off the field, and I know, if I ever need help with anything, my girls always got me,” Taylor said, “and if I didn’t play sports, I would never have learned that.”

She praised Tyson, assistant field hockey coach Caryn Rehme and her head girls lacrosse coach Laura Camp for pushing her and telling her to not give up.

“If it wasn’t for them, I would’ve stopped. I had no film until this last senior year,” Taylor said. “Playing in college became like a backburner, and I really just focused on my academics, which got me scholarships, but I still had that unfulfilled spot in my heart, knowing that I wanted to play, and so Tyson and Rehme just helped me out and got film together and they were just like, ‘Dude, just don’t stop.’

“I was just emailing coaches, talking to coaches, calling coaches, doing tours, going and seeing them, hanging out with the team and doing things like that,” Taylor said. “It was just everything I’ve always wanted it to be and I’m so excited to move forward.

“I’m especially looking forward to Tyson coming to the games and watching me play. It’s been a really big dream of hers since I joined the team to see me move to the next level and be competitive in a collegiate setting.”