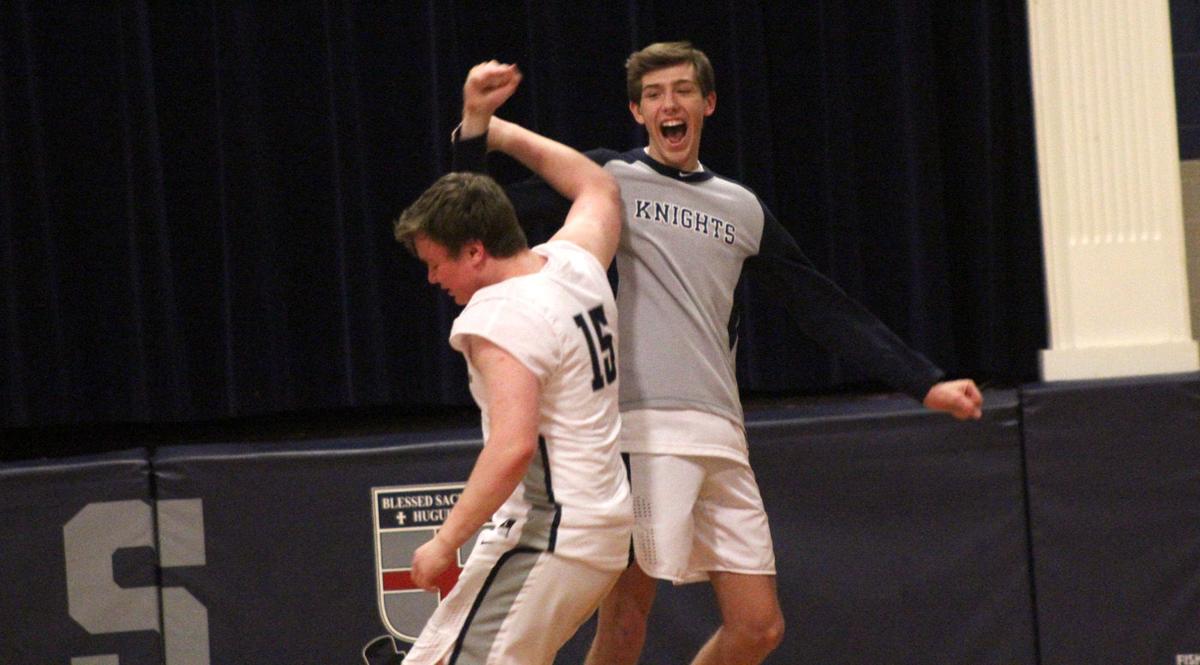 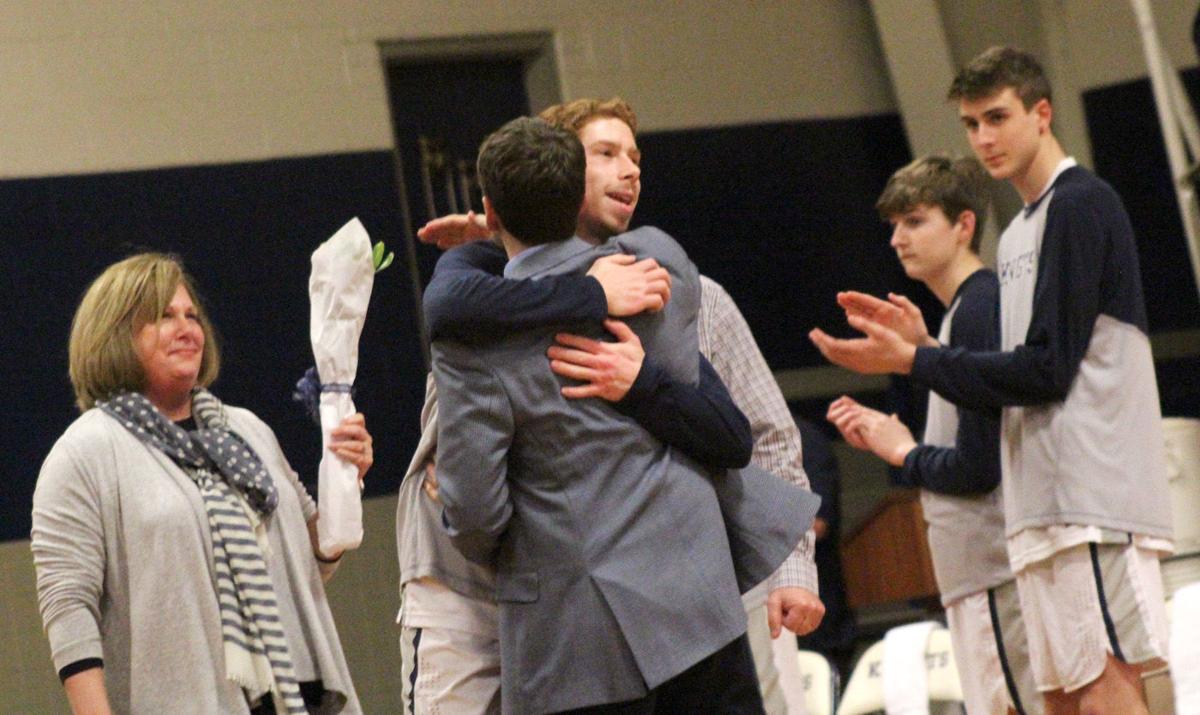 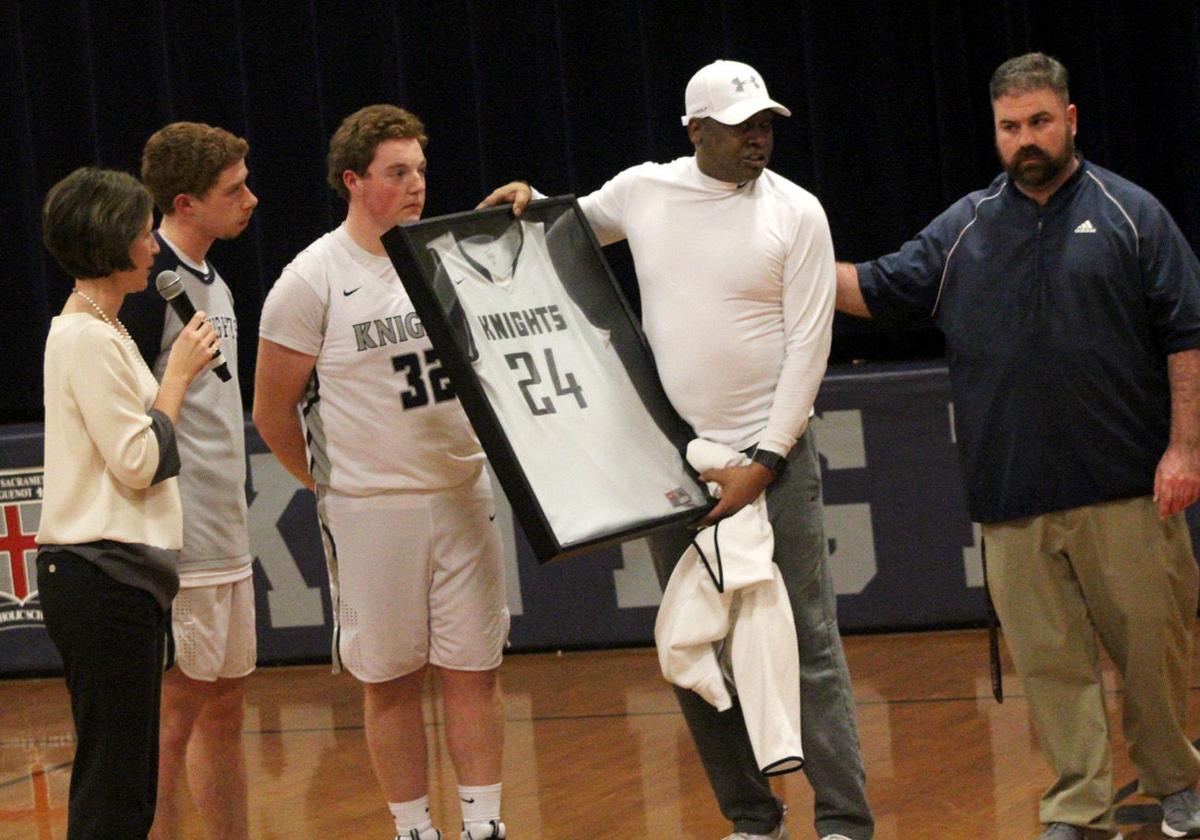 Les Johnson is presented with Cameron "Cam" Livers' no 24 jersey by Blessed Sacrament Huguenot seniors Raymond Avery (second from left) and James Hawkins (32) in honor of Livers, who graduated from Blessed Sacrament Huguenot in 2016 and passed away on Jan. 16, 2020 after he was diagnosed with a rare kidney cancer, Renal Medullary Carcinoma (RMC), in October 2019. Also pictured are BSH Head of School Paula Ledbetter (at left) and BSH Athletic Director James Poore (at right).

Les Johnson is presented with Cameron "Cam" Livers' no 24 jersey by Blessed Sacrament Huguenot seniors Raymond Avery (second from left) and James Hawkins (32) in honor of Livers, who graduated from Blessed Sacrament Huguenot in 2016 and passed away on Jan. 16, 2020 after he was diagnosed with a rare kidney cancer, Renal Medullary Carcinoma (RMC), in October 2019. Also pictured are BSH Head of School Paula Ledbetter (at left) and BSH Athletic Director James Poore (at right).

POWHATAN – Robbie Kurtz and Raymond Avery have been teammates in basketball since sixth grade. They’ve spent all four years on varsity side-by-side, and they’ve worked hard together in practice throughout that time.

So, for both Blessed Sacrament Huguenot seniors, it was fitting that they each got to reach 1,000 career points in the same night when they helped their Knights fend off Brunswick Academy, 65-60 at home the previous Friday.

And then, in Tuesday's Senior Night game, Kurtz and Avery poured in 26 and 25 points, respectively, to lead the Knights past Banner Christian 86-79 and help them continue their first winning season since the 2014-15 school year.

Avery said he went up to Kurtz and told him after the game that he wouldn’t have wanted to end it any other way.

“It was really special to be able to work together for these last four years and then have the accomplishment that we had and then…the win tonight,” Avery said.

“It means the world to me,” Kurtz said. “We’ve come a long way since freshman year, and it’s just good to see it finally pay off and we’ve got more to come.”

BSH head boys basketball coach Chris Hamner called the two seniors “unbelievable kids" both on and off the court.

“We have a saying with our team: winners win, losers lose. And that has nothing to do with basketball,” Hamner said. “Those two guys are winners at life and it just trickles onto the court.”

Tuesday’s win marked the first time that the Knights had scored more than 80 points in a game since Jan. 28, 2015, when they routed Banner Christian 91-46. It also featured a massive turnaround effort from less than a month ago, when the Knights took a rough 89-56 loss on the road to the Bearcats.

This time around, Kurtz and Avery combined for 51 points, and four BSH players overall netted double figures as Adam Angle, who transferred in this season from Monacan High School, racked up 18 points and sophomore Zander Nadeau dropped in 11.

“I just think it shows we can play with anybody in our league if we play like that,” Kurtz said.

“Just a huge game for us. If you had told me coming into it that we were going to give up 79, I would’ve told you we would have no chance,” Hamner said. “We just had guys making shots, making plays. Seniors rose for Senior Night. I could not be any prouder of a group of guys in my life.

“Last time it was us playing offense against them playing offense and defense,” Avery said, adding that, this time, “we really locked down and we were able to hit shots as well. That really, really went a long way for us.”

Both teams fired at the basket very well from behind the arc, with Banner Christian making 11 3-point shots and the Knights draining 10. But the Bearcats were limited to three players scoring all 79 of their points (Theo Cole led all players in the game with 34), and the Knights also shot 29 for 39 from the free throw line. Banner Christian was held to 16 free throws and made 10.

“It’s all just a mental thing. We were locked in tonight,” Hamner said. “Everybody had the same focus – all 13 guys, guys on the bench, guys that started for Senior Night that didn’t play anymore after those first two and a half minutes. If you had told me that [the Bearcats] were going to shoot 75 percent against that first group in two and a half minutes [and have us] only be down 7-0, just huge play from guys that don’t normally play, and that just kind of trickled down.

“I know the score didn’t show it, but they were playing hard. They were playing their hearts out,” Hamner said of his all-senior starting five for Tuesday’s game. “I think the other guys saw them and were like, ‘Okay, we’ve got this. We can do this.’ Just a complete team win.”

After their second group of five players, including seniors Kurtz and Avery, subbed in for the starters during a free throw attempt, which the Bearcats made to grow their game-opening lead to 8-0, the Knights came storming back into the picture. Kurtz knocked down early 3’s and Avery flexed his speed in driving to the basket for layups. The two teams traded the lead all the way into the third quarter, when Nadeau and Avery knocked down back-to-back 3’s to put the Knights ahead for good.

BSH went into the fourth quarter ahead 51-47, and Nadeau turned a pass from Kurtz into another 3 that he made down the key. The Knights continued to mix in successful trips to the net for layups with strong outside shooting and a rash of free throws to steadily pull away. Angle shot 13 for 16 from the free throw line, including 8 for 10 in the fourth quarter alone.

There was also a special remembrance before the game for late Blessed Sacrament Huguenot Class of 2016 graduate Cameron "Cam" Livers, who was diagnosed with a rare kidney cancer, Renal Medullary Carcinoma, in Oct. 2019 and passed away on Thursday, Jan. 16.

Head of School Paula Ledbetter described Livers as the sweetest, nicest and kindest young man, and while he wasn’t in the spotlight, she said that he worked very hard athletically and academically. She described him as having a great laugh, a great smile and a great sense of humor.

In Livers’ memory, Avery and Hawkins got to present his jersey to dad Les Johnson.

“He was my coach back on JV, and ever since, we’ve had a really close relationship,” Avery said of Johnson. “It’s unimaginable to hear about Cameron. It was the least we could do. I thought it was something really special we could do to honor Cameron.”