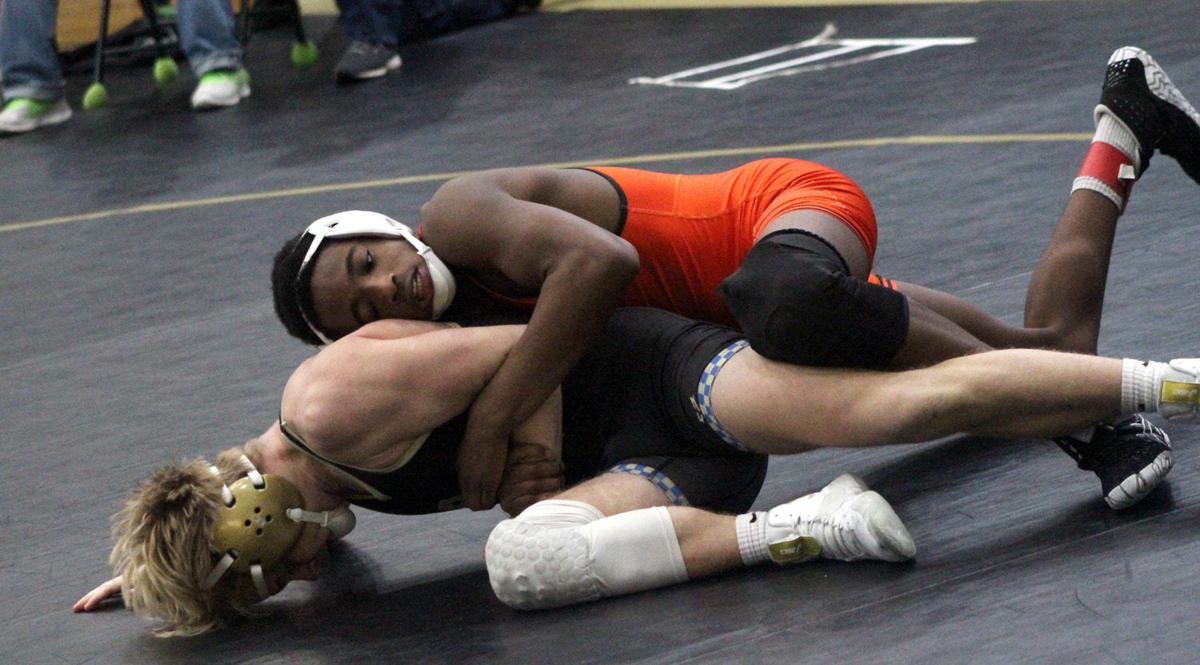 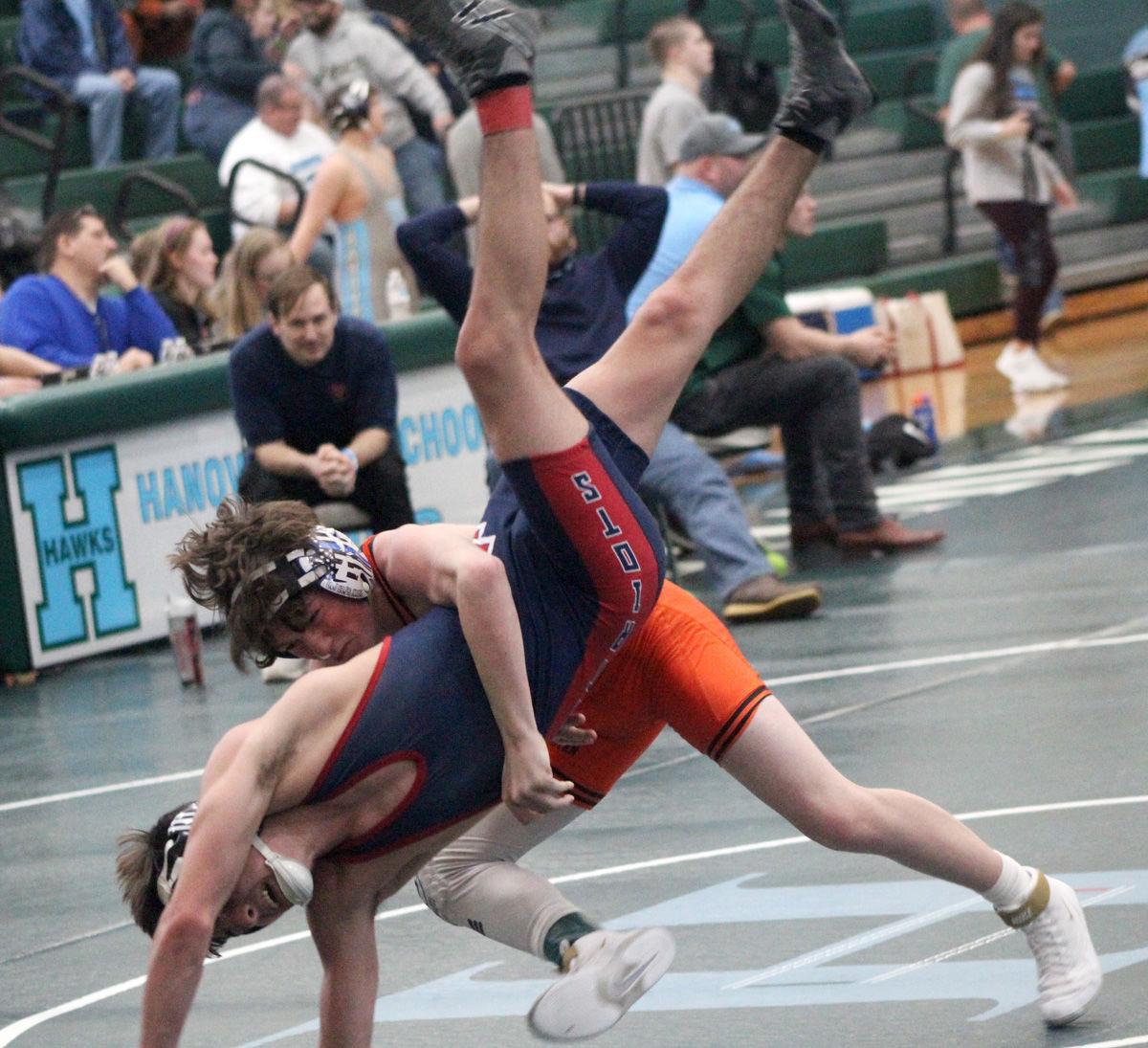 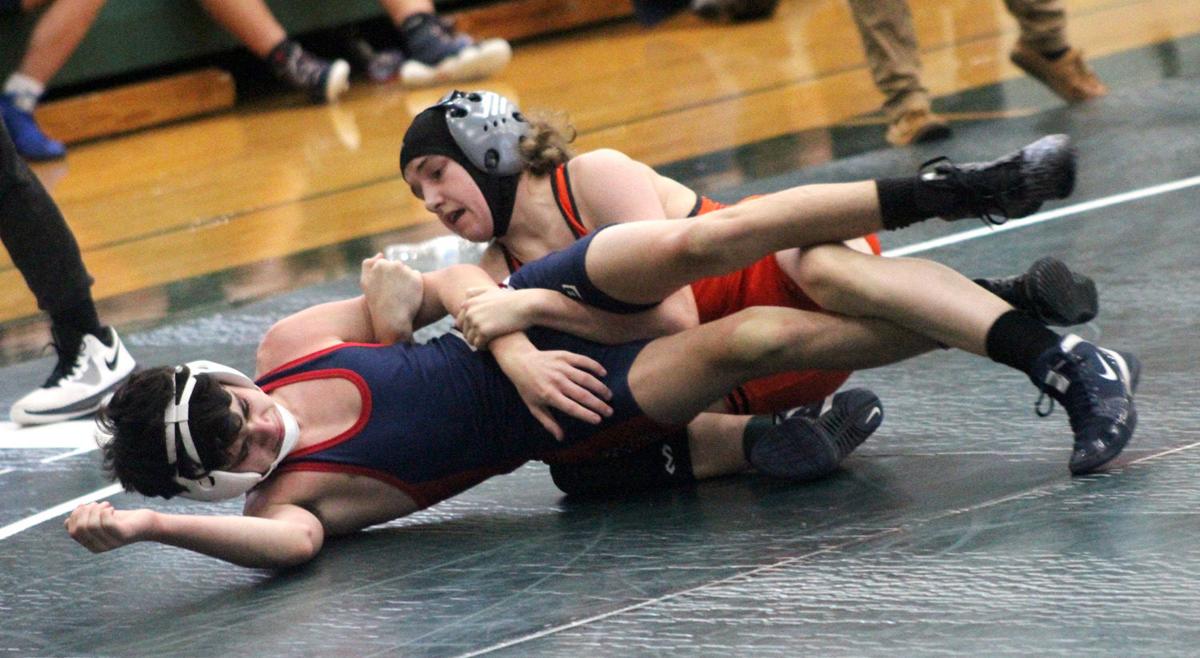 MECHANICSVILLE – Freshman Britton Proffitt and returner AJ Gaskins had both been working at getting their weight to where the team wanted it to be. Proffitt has been getting down to 120, and Gaskins was also coming back from injury-related issues.

Head coach Jonathan Tanaka said they both looked really good in the room during practice, but Saturday’s Hawk Duals at Hanover High School marked their first competition of the season.

And Powhatan High School wrestling went 3-1 overall across their four duals, taking wins of 57-20 over Smithfield, 52-33 over Patrick Henry and 60-9 over Varina and getting dealt a narrow 32-30 setback to Hanover.

For the whole day, Powhatan only lost three matches by getting pinned.

But wins by pins were plentiful for the Indians. Gaskins earned three pins alone, including one against Varina after battling back from a 4-0 first-period deficit to take command of the match with a reversal and build towards the pin with a couple of near-falls.

The junior also defeated Smithfield’s Cameron Hatchett on a 5-1 decision.

“He’s looked really good,” Tanaka said of Gaskins. “He’s always been a dedicated wrestler, but I think he’s kind of pushed himself a little bit more and I think we’re starting to see the results of that. Very happy for him – hopefully we can continue his trajectory as it moves forward.”

Proffitt actually got to wrestle up at 126 – with junior Sean Hall going up to 132 and Gavin Timmons bumping up to 138 – and he picked up two pins before mixing in three takedowns and a couple of near-falls to beat Patrick Henry’s Sam Fox by tech fall.

Hall went 3-1 while wrestling up a weight class, earning all three of his wins by pin and holding his one winning opponent, Smithfield’s Mason Parker – the 132 weight-class Toys 4 Tots Tourney champion at Ocean Lakes High School – to 3 points on an 8-7 decision.

Timmons also picked up two hard-earned victories while wrestling up a weight class. After trailing Smithfield's Roberto Hines 4-1 at the end of the first period, Timmons got an escape, got a hold of his opponent’s leg and worked the grab into a takedown of Hines to tie the match at 4-all. He ended the second period with a near-fall to take the lead, then pinned Hines with 45 seconds left in the third. He ended the duals by pinning Varina’s Tyree Nash.

Shining brightly at 160 for Powhatan was Adam Camp. The sophomore enjoyed a breakout performance as went 3-1 – and earned all three of his wins by pins.

It’s his first year in the varsity lineup, and Tanaka said he’s been kind of feeling his way through. But one of the things that’s helped Camp – Tanaka noted – is that he’s gotten to wrestle a lot with teammate Matthew Bales, who did well in the Lee-Davis Holiday Classic before the break, placing 5th.

Dylan Coward returned to the 106 weight-class spot with freshman Kieran Hathaway still feeling under the weather following the wrestlers’ trip to the Knockout Christmas Classic in Kissimmee, Florida. The hard-working sophomore closed-out the duals with two contested victories to his name, one at 106 and another at 113. He tied Patrick Henry’s Elias Sotos up to 7-all, then tipped the scales in the waning seconds on a near-fall to take the 10-7 decision. He built on his 3-point win with a 6-point first-period pin against Varina in the 113 weight class. He also came close in the decisive last match of Powhatan’s dual with Hanover as he helped force overtime, but Hayden Bowles narrowly won 8-6 with a sudden-death takedown.

“It would’ve been nice for him to pull-off that Hanover match, but…he’s battled - he’s always battled really hard,” Tanaka said of Coward, adding that: "If he would watch himself through our lens or he could see himself how we see him, he would understand that he’s a lot better off than he realizes. I think he feels undermanned physically, especially a lot of times, and quite frankly, there’s no reason for him to feel that way. He’s got the technique. He’s got the ability. He’s just got to go out there and wrestle, but…it was a really good day for him.”

Andrew Cheatham continued to showcase his power at the 152 weight class. The sophomore went 3-1 with three pins, including one against Smithfield’s Taron Stephens in 40 seconds. Junior Micah Holt also went 3-1 as he took a win by forfeit against Smithfield and earned a pair of second-period pins against Varina and Patrick Henry’s Jason Cooper.

Tanner Palmore, wrestling in the heavyweight division, went 3-1 as he picked up a win by forfeit against Patrick Henry, pinned Smithfield’s Alex Leboffe and pinned his Varina opponent in 53 seconds.

Linwood Hill at 195 bounced back from a narrow 10-8 loss to Jack Epperly in the closing moments to go 3-1 as well, with a win by forfeit against Smithfield and two first-period pins against Varina and Patrick Henry’s Alex Clough in 55 seconds.

Hayden Fitzsimmons at 182 took two wins by forfeit and also rebounded from a narrow loss by decision to Hanover’s Elijah Hunter, a Region 4B runner-up, to defeat Patrick Henry’s Lorenzo Verdelotti on a 9-2 decision as he mixed in three takedowns with a near-fall and an escape to go 3-1.

After limiting his winning Hanover opponent, last year’s Region 4B 160 weight-class champion Josh Epperly, to 4 points on a win by major-decision, Hans Rehme at 170 took two wins by forfeit before pinning his Varina opponent in 51 seconds for a 3-1 day.

But while Powhatan allowed only three bonus points from that moment on, Hanover managed to win the rest of their matchups.

“I think we fought really hard up there – it’s just a matter of: we need to win some of those matches to turn that tide,” Tanaka said. “We’ve got to be able to wrestle hard every weight class...”

He added: “We’ve been a slow-starting team since I’ve been here, and that’s one thing we’ve always worked on and I think that’s something that we’ve just got to continue to focus and work on every match – whether or not it’s the first one of the day or the last one of the day, we’ve got to figure out a way to get up for those, mentally and physically…but really good way to end the day; we wrestled really well against Smithfield, Patrick Henry and Varina to close it out.”

In 11 contested matches with Varina, Powhatan won 9 by pin.

Powhatan will next take on Atlee and Cosby in a tri meet at Powhatan High School on Wednesday, Jan. 8 at 6 p.m.

Overall the Indians were still recovering from sickness that they also experienced during their trip to Florida, but Tanaka noted that they’re not the only team dealing with that right now.

“I talked to the Lee-Davis coach, they’ve got a couple of kids out - it’s that time of year where everybody’s gonna have some people out,” Tanaka said. “The bottom line is: we’re still gonna wrestle, we’re still gonna compete. Nothing’s changing for us. Nobody’s gonna feel sorry for us. We’ve got to go out there and keep wrestling.

“I think we’re learning really good lessons about that,” Tanaka said. “We’re learning a little bit about ourselves: that we can push through, even though things aren’t perfect sometimes.”