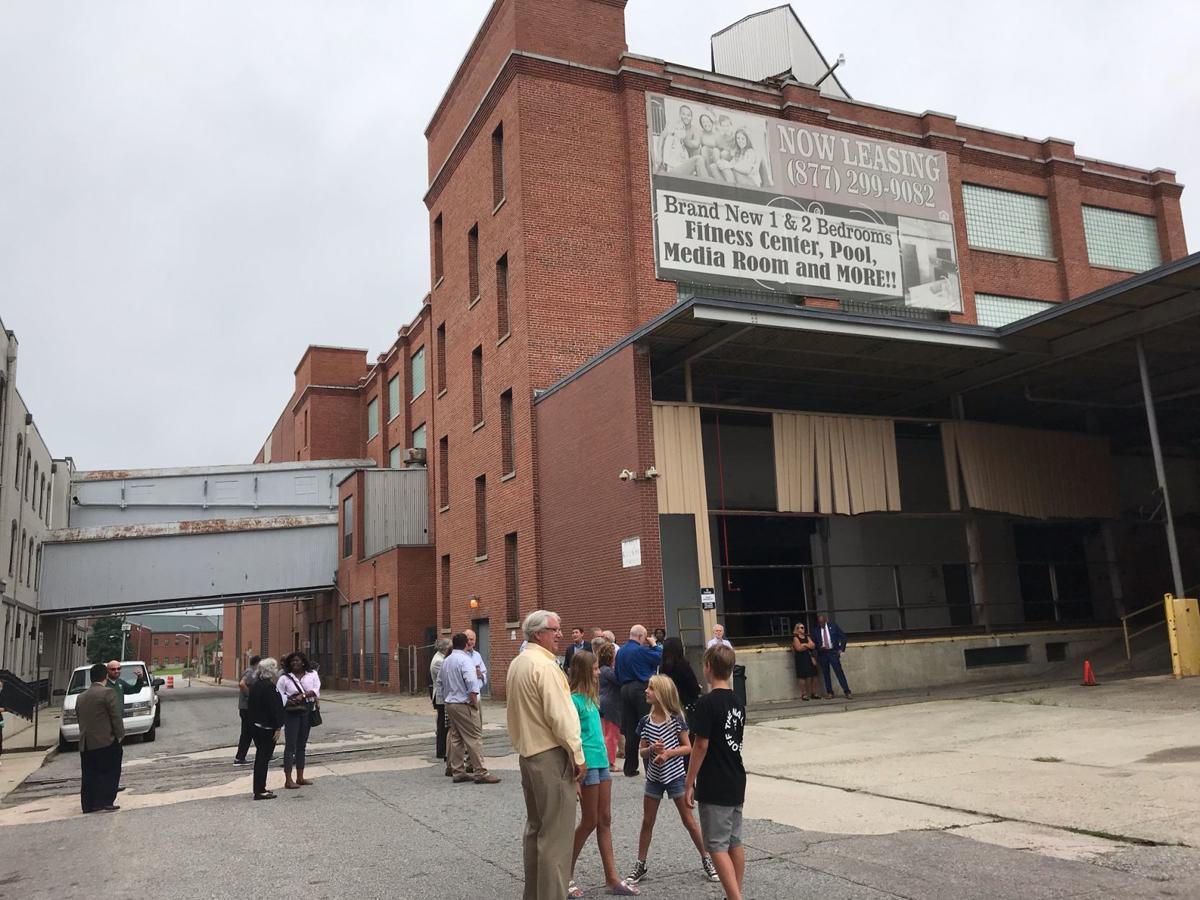 Petersburg ArtistSpace Lofts will be built on the site of a former Brown & Williamson tobacco warehouse on South Perry Street. 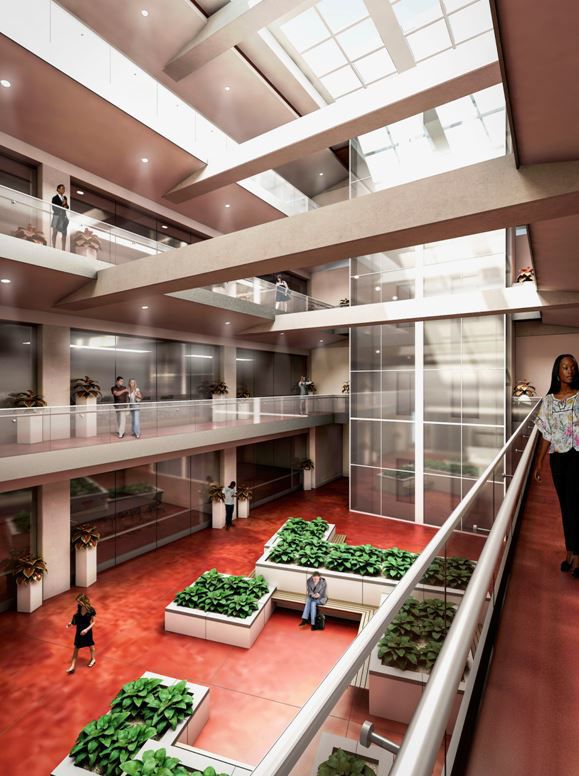 A rendering depicts a four-story glass atrium planned for the Petersburg site, which will include 226 units of affordable rental apartments. 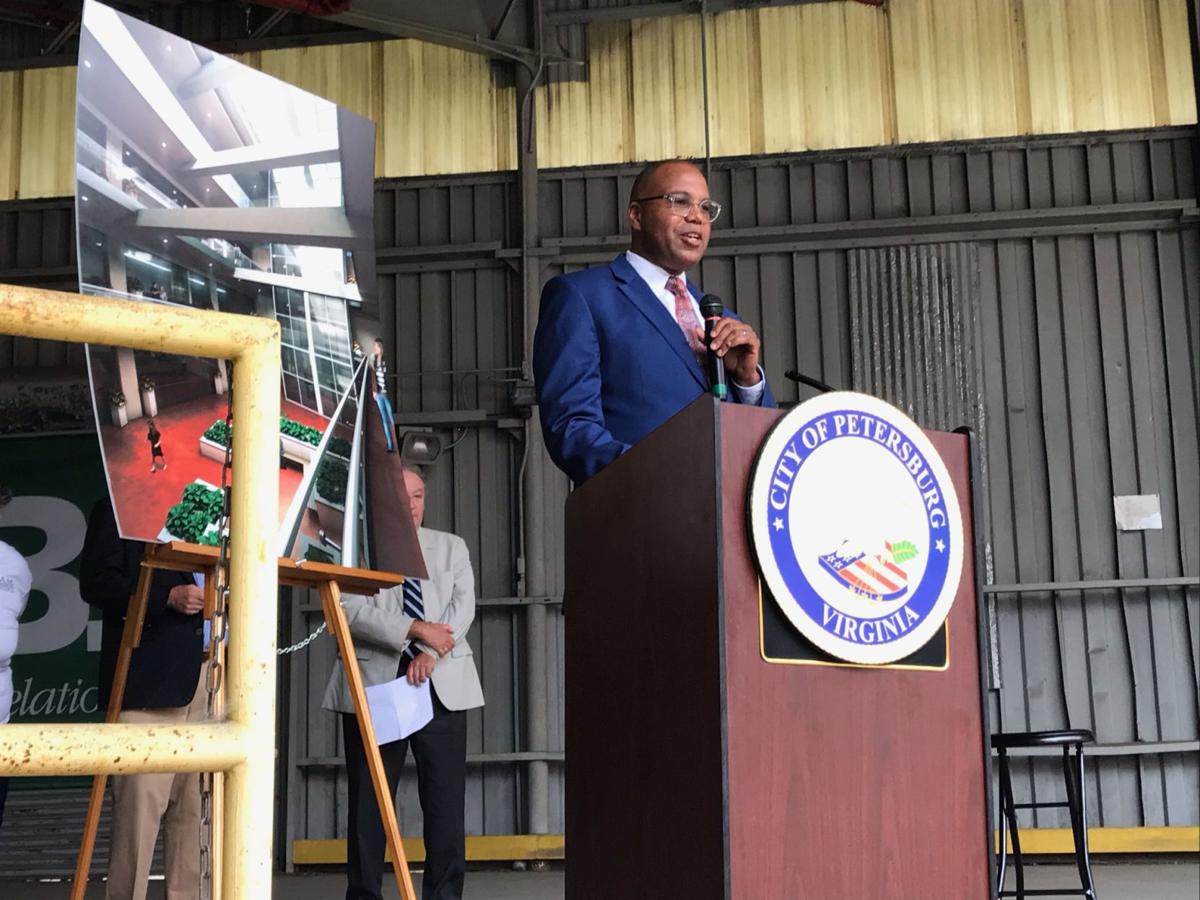 Petersburg Mayor Sam Parham speaks on Friday, July 12 at a ceremony that marked the beginning of a project to renovate two former buildings on South Perry Street in Petersburg into 226 affordable rental apartments.

Petersburg ArtistSpace Lofts will be built on the site of a former Brown & Williamson tobacco warehouse on South Perry Street.

A rendering depicts a four-story glass atrium planned for the Petersburg site, which will include 226 units of affordable rental apartments.

Petersburg Mayor Sam Parham speaks on Friday, July 12 at a ceremony that marked the beginning of a project to renovate two former buildings on South Perry Street in Petersburg into 226 affordable rental apartments.

The buildings, dubbed Petersburg ArtistSpace Lofts, are part of a seven-building campus on South Perry Street downtown that once housed a Brown & Williamson plant before the tobacco company moved out two decades ago.

“Right now, it’s not very attractive [inside], but it’s going to be beautiful,” Tom Wilkinson, the main developer, said at a Friday ceremony that formally kicked off work at the site.

Wilkinson said the warehouse building’s interior — a shell of red brick walls, along with wood and concrete floors — will be converted into a space with four-story atriums, a fitness center, pool, and apartments featuring granite countertops and stainless steel appliances, he said.

“All at rents that people can afford,” Wilkinson said.

Rentals will be restricted to households earning 40 to 80 percent of the Richmond area’s median income, which comes to $24,220 to $69,240 depending on household size, according to 110 South Perry LLC, the development company that’s spearheading the project.

The median household income in Petersburg is $33,939, according to U.S. Census Bureau figures.

There will be 226 units on the site, which will include efficiency apartments, as well as one- and two-bedroom units.

Fifty of those units will be provided to artists who would have studio space in their apartments for their work, according to the Cameron Foundation, a private foundation that gave a $400,000 grant toward the project. There will be an additional 13 artist studios on the property, as well as art galleries.

“Artists really are the ultimate urban pioneers, and investment really follows them wherever they locate,” Graham said. “Even people who are not artists often like to live near creative communities.”

Victoria Revilla, vice president of the Petersburg Area Arts League, said the new development will be helpful for beginning artists in the city.

“It gives you affordable housing, but it also brings you in contact and fellowship with other artists who may already have had experience and learned from their struggles,” Revilla said. “There’s an arts community established already in town that they can network with.”

The project involves a $57 million investment in the site, money that the developer says comes from taking on debt, along with cash provided by investors who purchase federal and state tax credits related to historic preservation and workforce housing.

Funding for the project includes bonds issued by the Petersburg Redevelopment and Housing Authority that were purchased by the Cedar Rapids Bank & Trust of Iowa, the development corporation said.

“This is going to be the anchor of an artist community that thrives here,” said Petersburg Mayor Sam Parham.

The mayor said that in addition to artists, the ArtistSpace Lofts could provide affordable housing for public employees — such as teachers, public safety workers and people employed by Virginia State University. The ArtistSpace development is across the street from several other market-rate rental buildings on the former Brown & Williamson site.

The mayor noted that work on the apartment project is beginning as Petersburg is seeing the AMPAC Fine Chemicals company reopen its pharmaceutical ingredients factory within the city. AMPAC is expected to hire 110 people in the coming years.

Parham said the ArtistSpace apartments are expected to be completed at the end of next year and could start leasing in 2021.