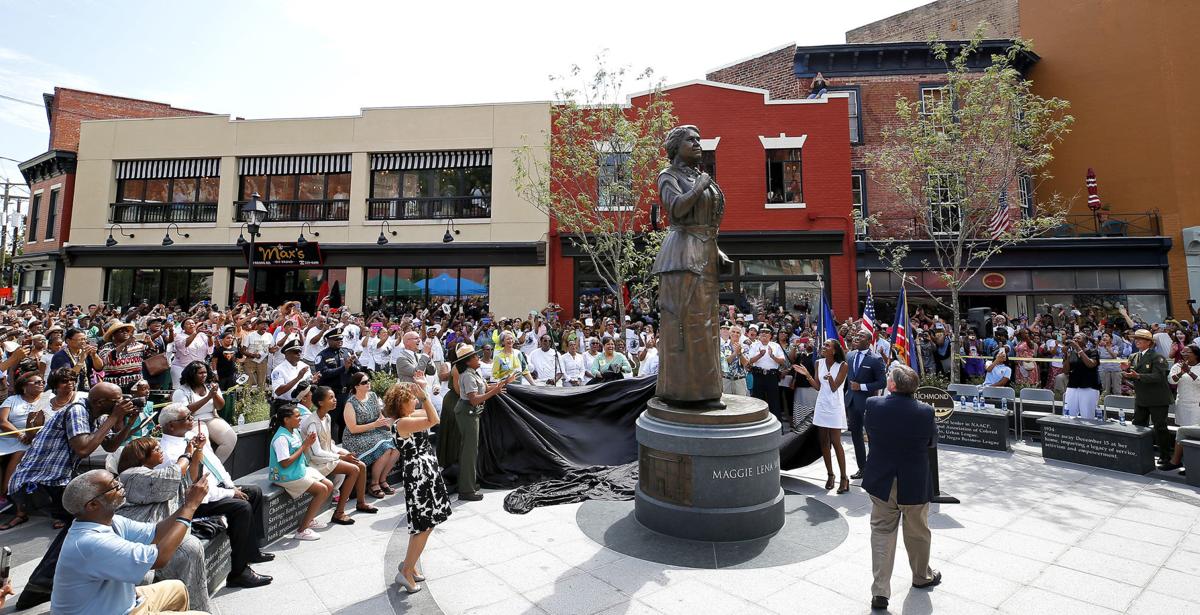 The Maggie L. Walker statue is at Broad and Adams streets “in the heart of this city,” great-great-granddaughter Liza Mickens (below, center) said Saturday. Also attending the event were sculptor Antonio Tobias “Toby” Mendez (left) and Richmond Mayor Levar Stoney. 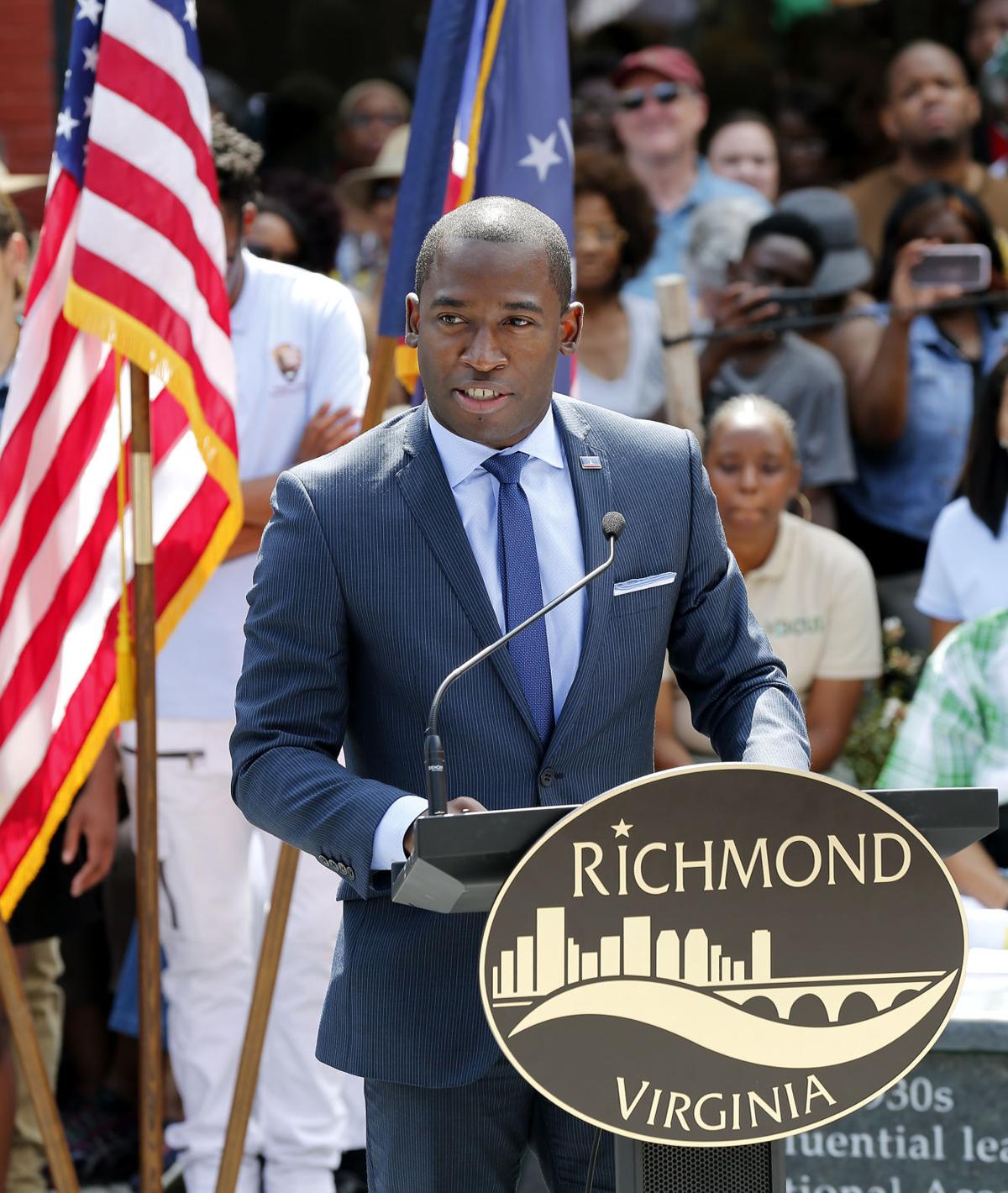 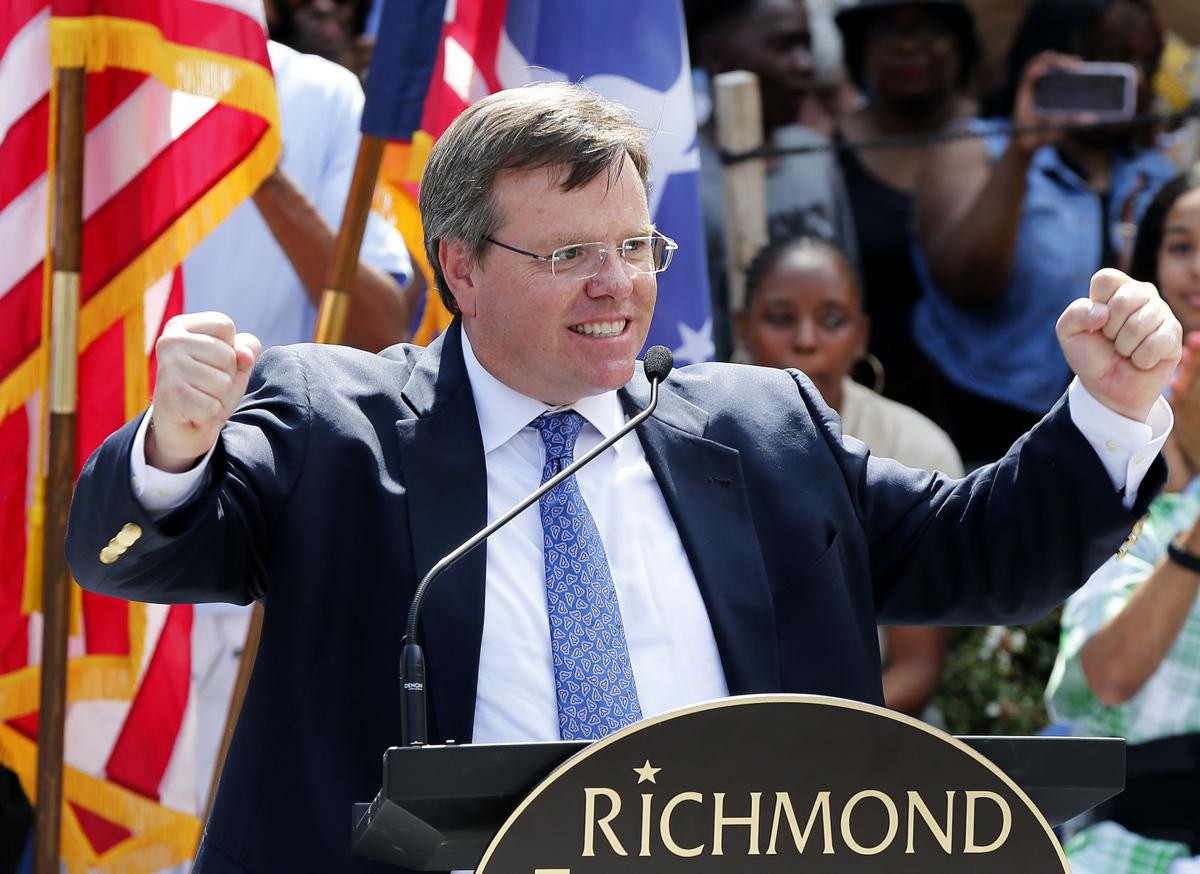 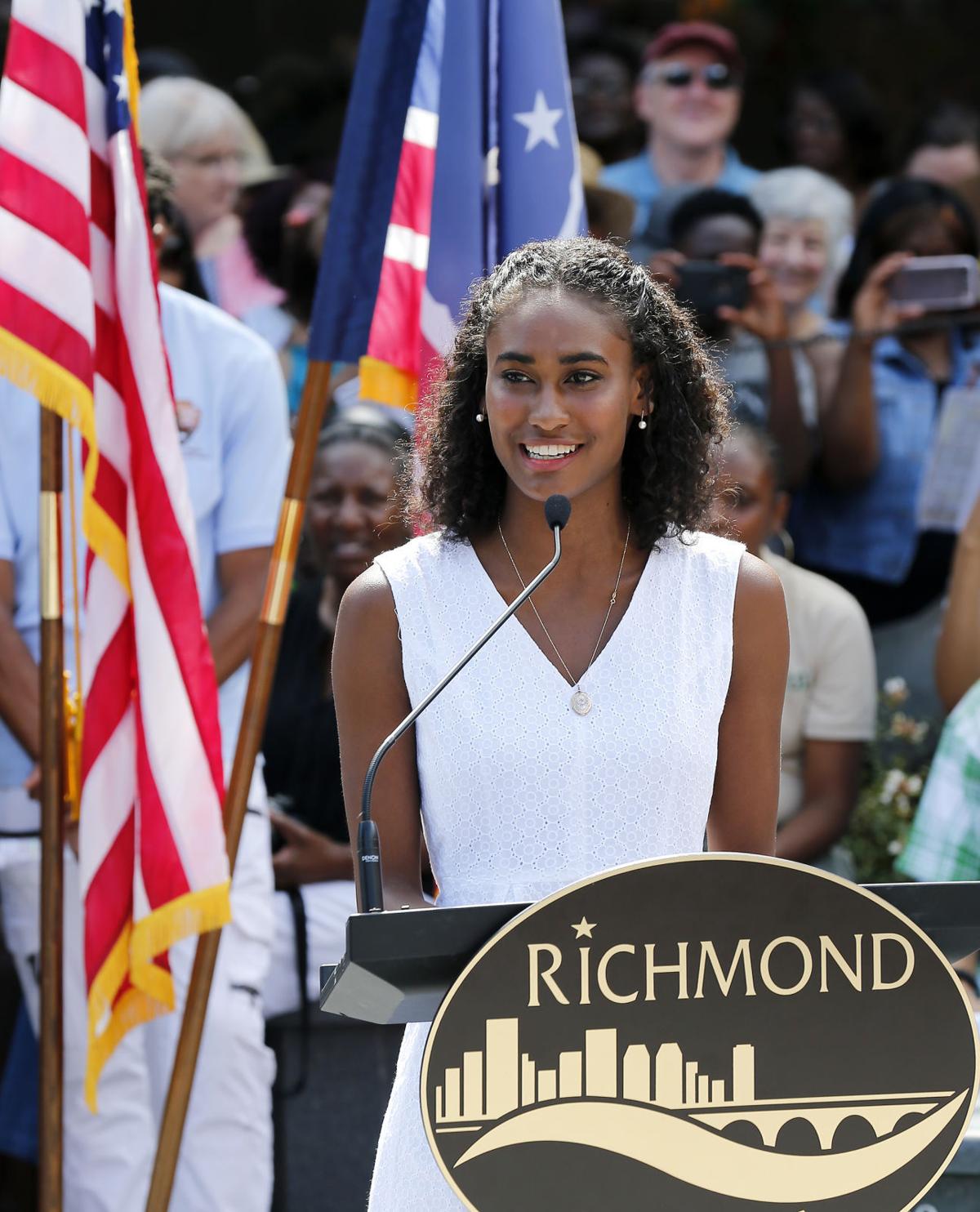 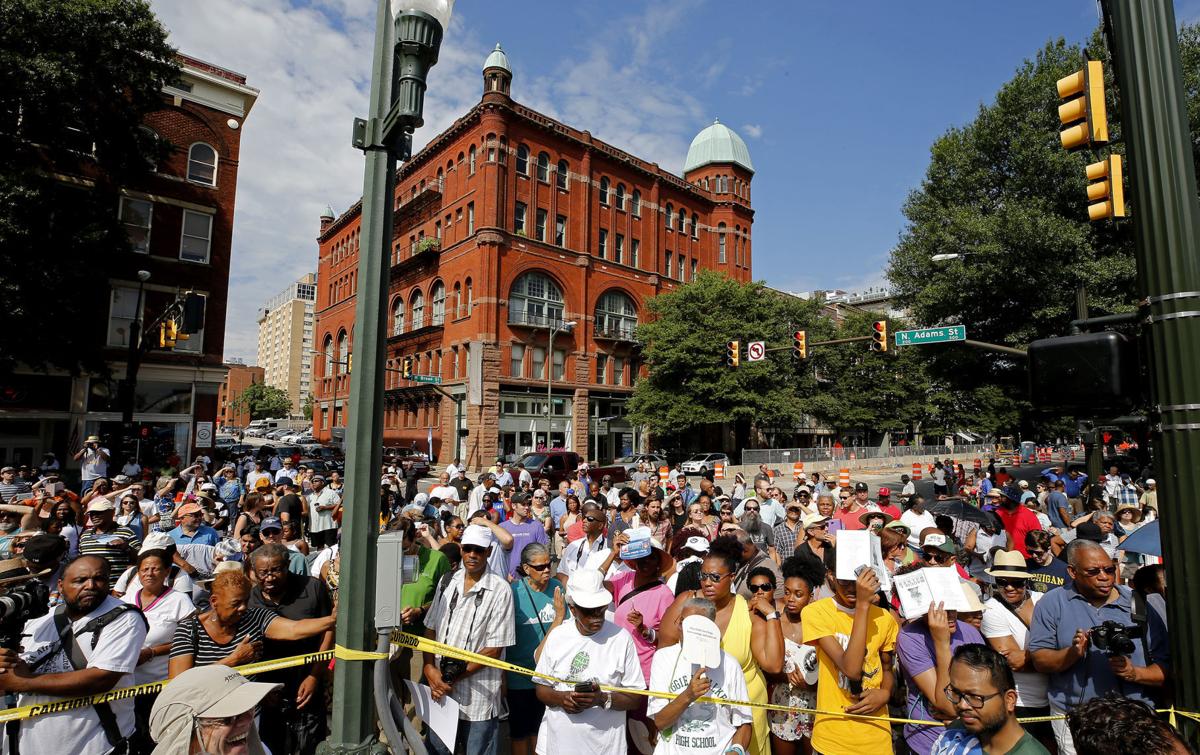 About 500 people gathered for the unveiling ceremony of the Maggie L. Walker statue in Richmond on Saturday. 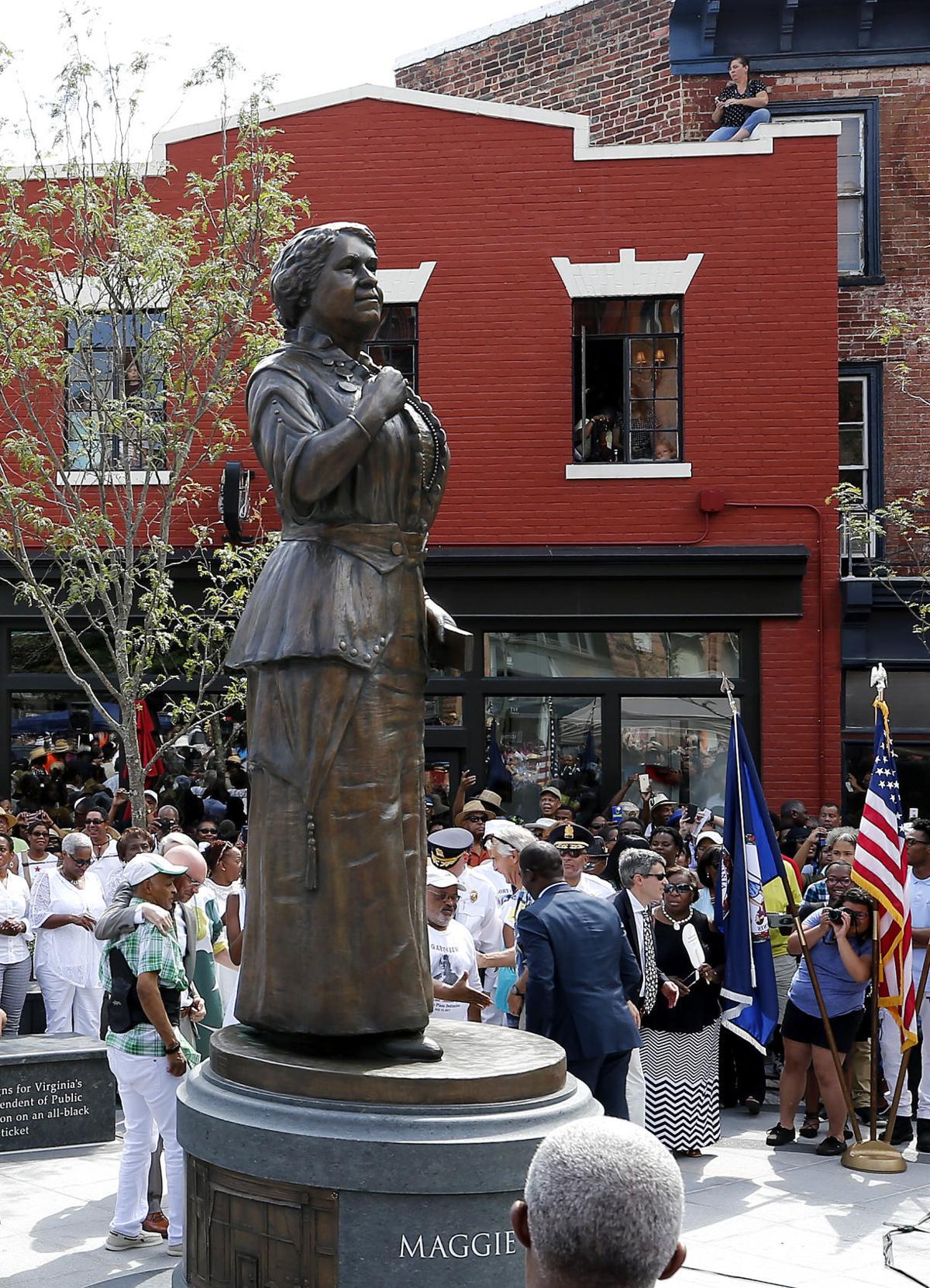 The Maggie Lena Walker monument was unveiled during a ceremony at Adams and Broad Streets in Richmond VA Sat. July 15, 2017. 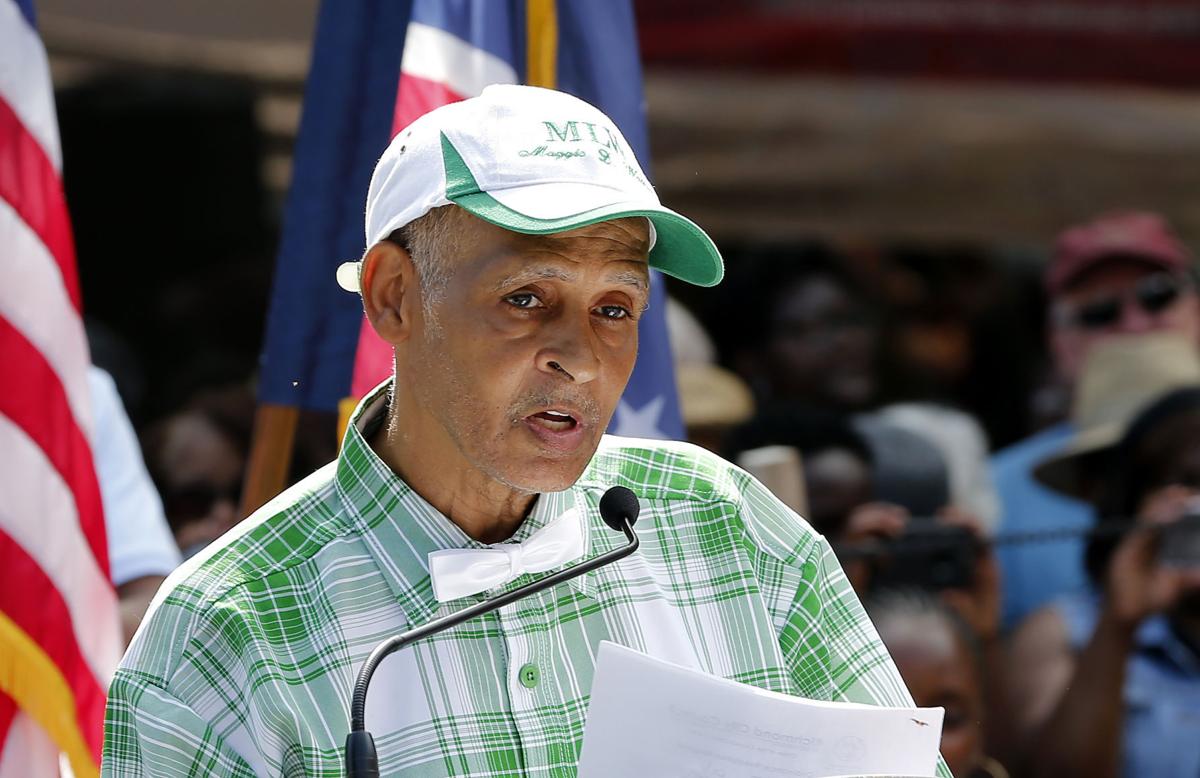 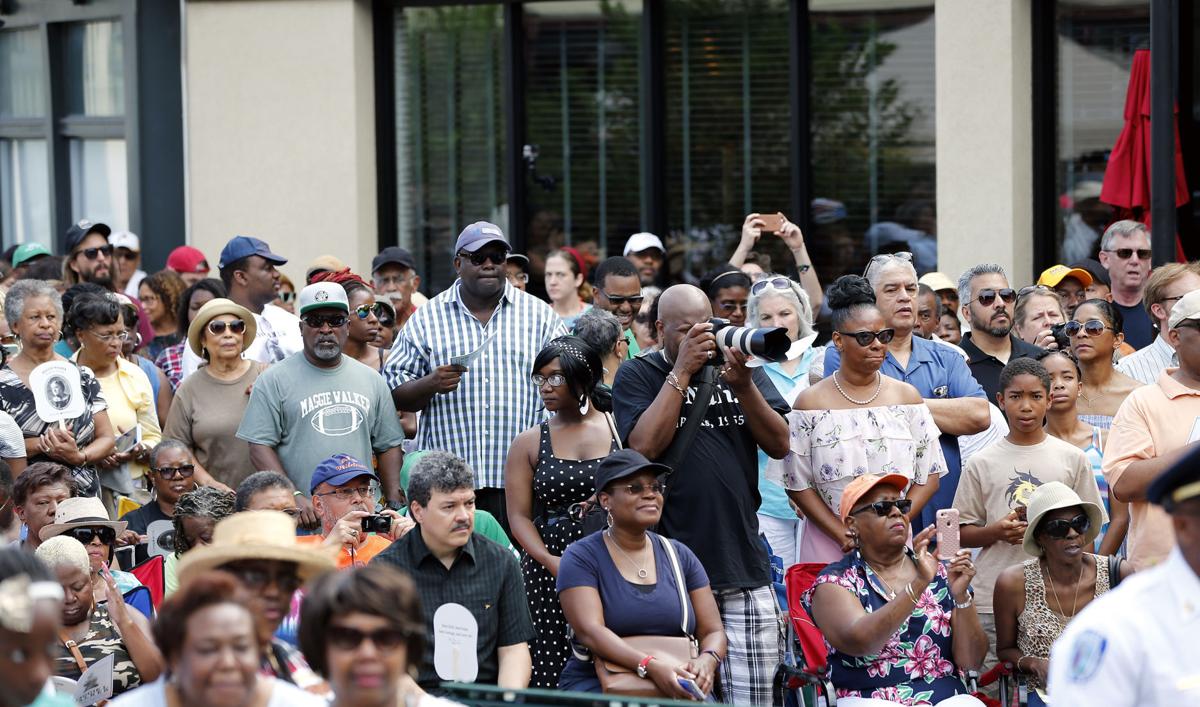 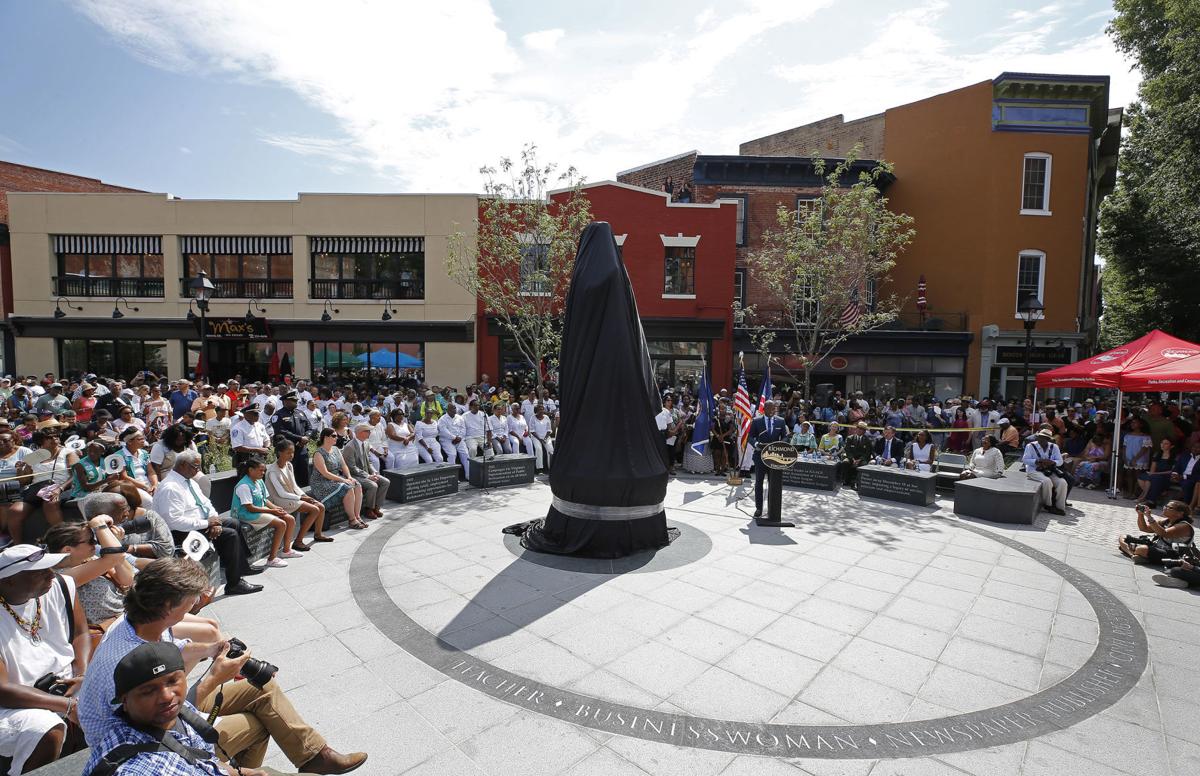 Money set aside under a city arts ordinance paid for the Maggie L. Walker statue that was unveiled in July.

The Maggie L. Walker statue is at Broad and Adams streets “in the heart of this city,” great-great-granddaughter Liza Mickens (below, center) said Saturday. Also attending the event were sculptor Antonio Tobias “Toby” Mendez (left) and Richmond Mayor Levar Stoney.

About 500 people gathered for the unveiling ceremony of the Maggie L. Walker statue in Richmond on Saturday.

The Maggie Lena Walker monument was unveiled during a ceremony at Adams and Broad Streets in Richmond VA Sat. July 15, 2017.

Money set aside under a city arts ordinance paid for the Maggie L. Walker statue that was unveiled in July.

In her most trying moments, Lisa Monique Walker Martin returns to her great-great-grandmother’s home.

It is there, in that 28-room house in the heart of Jackson Ward, where she says she can hear her famous ancestor’s voice and gain strength.

Walker Martin hopes that a statue of her great-great-grandmother unveiled Saturday will do the same for Richmond residents and a nation caught in “tumultuous times.”

“She was a community person. She wasn’t just about her immediate family,” Walker Martin said Saturday amid a crowd of hundreds looking up and carefully laying hands on the sculpture of her family’s matriarch.

The 10-foot bronze statue of a 45-year-old Walker standing tall is surrounded by inscriptions tracing the life of the woman who early on helped her mother, a former slave, by delivering clothes as a laundress. She then became a newspaper publisher, teacher, bank founder, businesswoman, civil rights leader, entrepreneur and mother.

“She is in her rightful place in the heart of this city,” Liza Mickens, another of Maggie Walker’s great-great-granddaughters, told the crowd.

She is facing Broad Street, Mickens said, where African-American people weren’t always welcome. She is also at the gateway to Jackson Ward, a historic African-American community that she helped inspire.

Mayor Levar Stoney twice noted that this statue is the first monument on a city street dedicated to a woman in Richmond’s history.

“As you know, Richmond has many monuments. And you know how I feel about those,” Stoney said in reference to Confederate statues along Monument Avenue, a remark that drew low chuckles from the audience. “This will be my favorite monument in the city.”

The roars from the crowd grew as Stoney said that such a statue won’t be the last of its kind, and “it’s about time.”

The monument was an idea 20 years in the making.

Melvin Jones, a longtime advocate for the statue who needed no introduction to the audience, received some of the biggest applause when he recounted sitting outside several politicians’ offices for hours to push the project forward.

Jones recalled lines from the song, “Lift Every Voice and Sing”: “Facing the rising sun of our new day begun, Let us march on till victory is won.”

“I feel like victory was won today,” he said, causing another roar from the crowd.

After the speeches, the songs and, finally, the unveiling, Walker Martin wasn’t alone in feeling the spirit of the matriarch come back to her on Saturday, which was also Maggie Walker’s birthday.

It was needed, some of the relatives said, after the death last year of “Granny Beth,” Maggie Walker’s granddaughter and the last relative to have had a direct relationship with her. On her deathbed, the statue was something that “Granny Beth” said must happen, a tearful Mickens said.

“Her resilience and self-reliance was instilled in us. A lot of us are entrepreneurs,” said Saint Elmo Crawford, Maggie Walker’s great-great-grandson.

Several family members heard Maggie Walker repeat her well-known words of resilience: “unite head, heart and hand. Be strong in words. Stand firm in what is right. Have faith, have hope, have courage and carry on.”

Some of those famous words from Walker were printed on the back of fans that many in the crowd of about 500 people used to cool themselves.

Women and men dressed in Sunday clothes whispered “beautiful” and “thank you” as they touched the sculpture.

Many then scooted their children through the crowd, up to one of Walker’s descendants to get an autograph and take a picture.

“I want people to feel like they are welcomed into her family,” Walker Martin said. “I want people to be able to come to her — because she had barriers she had to overcome. If she can do all that, then we don’t have any excuse.”