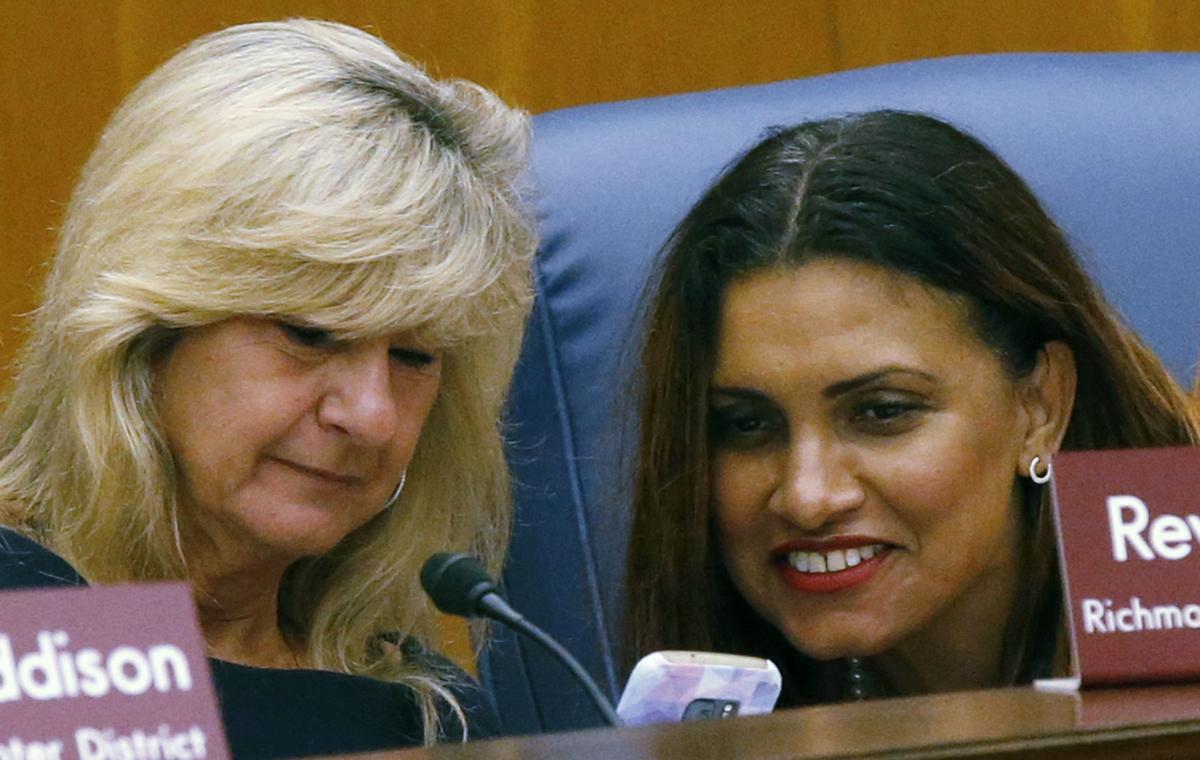 Richmond voters may get to weigh in on whether public dollars should pay for a new downtown arena.

The Richmond City Council will hold a special meeting Tuesday on whether to include an advisory referendum on the November ballot about financing for the centerpiece of the $1.5 billion Coliseum redevelopment project. Calling for the referendum is Councilwoman Reva Trammell, the 8th District representative.

“Personally, I’m tired of rich corporate millionaires and billionaires trying to drain city coffers of our taxpayer money to finance their pet projects,” Trammell said in a text message. “My view is if they want to build something, let them do it with their own money.”

Trammell said she wants voters to answer this question: “Shall the city of Richmond support taxpayer funding, estimated to be as much as $600 million, for a new Coliseum or arena in downtown Richmond?”

Asked whether the mayor supported Trammell’s proposal for a referendum, Stoney spokesman Jim Nolan said in an email that the council should “first read the proposal” and let a council-appointed commission review the deal, as originally planned. He added that council members “should do the job the citizens of Richmond elected them to do, rather than alter [the council’s] process because a few special interests pressure them to do so.”

The new arena is the centerpiece of the mixed-use development proposed by NH District Corp., a private group led by Dominion CEO Thomas F. Farrell II, which would privately source $900 million for other parts of the project.

Its plans also call for a high-rise hotel with at least 525 rooms; 2,500 apartments, with 480 reserved for people earning less than the region’s median income; 1 million square feet of commercial and office space; 260,000 square feet of retail and restaurant space; a renovation of the historic Blues Armory; a new transfer plaza for GRTC Transit System bus riders; and infrastructure improvements to make it easier for pedestrians and cyclists to navigate the area.

Money for the arena would come by way of a special tax zone called a tax-increment financing district.

All new real estate tax revenue from the zone, either from new construction or rising property assessments, would go toward debt payments on a $350 million bond offering for the arena. The money would otherwise go into the city’s general fund, which pays for core services such as police and schools.

As proposed, the district would be bounded by First Street, 10th Street, Interstate 64/95 and Byrd Street, a swath of downtown about eight times larger than the 10-block area where the proposed arena and mixed-use development would rise.

Over 30 years, the city would owe about $570 million to investors who buy the bonds. Previous figures from an earlier iteration of the plans pegged those costs at more than $600 million.

The city’s financial advisers, Davenport & Co., have said the project could net enough new tax revenue to pay back the money in as few as 21 years. That would bring the cost down to about $476 million.

Supporting Trammell’s call for a referendum is Kimberly Gray, the 2nd District councilwoman.

“It would be a strong indicator of where the community is on what we should be doing with their money,” Gray said.

The results of the referendum would not be binding on the council’s decision to approve or reject the project.

A separate referendum concerning the use of tax-increment financing may also appear on city voters’ ballots. More than 14,000 people signed a petition vying for a proposed change to the city charter that would require 51% of the money captured through the tax-increment financing district to go toward modernizing the city’s schools. A review of those signatures is ongoing.

The council is scheduled to meet at 4 p.m. Tuesday.

Nothing new, good or viable we don't know why.

Giving us facts just confuses us,

We'd rather just whiter and die.

It should not be listed as a referendum on a new coliseum but asa massive remaking of the Navy Hill area. Most voters will want the coliseum but not the giant money sucking boondoggle proposed for Navy Hill. Replacing the coliseum is the smoke screen.

No delay needed for that.

This will be the biggest scam on the taxpayers of Richmond ever and then they will need to increase the meals tax to cover the shortfall.

Councilwoman Rivs you put your name and reputation in the line. If this project goes over budjet by 500,000 because for some strange reason you always lie to us about the real cost of the project .... all members of Council needs to resign it goes over budjet. Say it-/ do it— and be honest

This is interesting ~ The City of Austin and the University of Texas will have a new $338 million arena (expandable to 15,000 seats) constructed on land fully owned by UT without using any university or public money. https://news.utexas.edu/2018/12/20/world-class-ut-basketball-arena-will-host-longhorns-benefit-austin-community/

The Coliseum needs to be replaced, but not with public funds. Dominion/VEPCO needs to pay its full share of real estate taxes, and this proposed redevelopment needs to be solely a private venture. The interested parties will argue that the city can’t pass up the funds that a new venue would bring, but every construction or development project always comes in over budget, especially when public funds are involved. Richmond has too many other issues to address at this time, such as its public schools.

At what point in any of this would dominion not be paying its full real estate taxes. Dominions taxes Or anything it pays would not be impacted. As a matter of fact donations from naming rights from dominion would mean them paying more than they would if the proposal was not approved.

“As proposed, the [tax] district would be bounded by First Street, 10th Street, Interstate 64/95 and Byrd Street, a swath of downtown about eight times larger than the 10-block area where the proposed arena and mixed-use development would rise.”

This eight-times-larger tax district includes Dominion’s current HQ, as well as the building they’re optioning to implode. This has been extensively covered in other articles about the Navy Hill redevelopment.

If they are successful in getting the question on the ballot, then it's all about the wording of the question. In short, people will generally vote "no" on items that could possibly increase taxes, and the legislators know that. If it's worded in a way that seems positive and could also seem like it could improve economics, schools, etc, it may pass. If it is worded as potential use of tax dollars and tax zones, it will likely fail.

Most voters will not have read the full proposal or even enough of the proposal to make an informed decision (That's what they're paying elected officials to do). The officials know that as well.

Council members should take their positions and make them known prior to election. If they believe the project really is a great one, they should support it. If they are opposed to it, let them oppose it. The referendum on their actions will come the next time they are up for election.

Thank you Reva for watching out for the working people and the middle class. Can someone answer how Norfolk’s Scope and Hampton’s Coliseum are still viable, but Richmond allowed the Coliseum to decay - much like it’s schools and roads. If this new boondoggle is allowed to go forward I guarantee in another 40 years it will be an eyesore if managed by the City.

It really would be a good topic, perhaps for a master's thesis in urban planning, to compare the Hampton Coliseum and Norfolk Scope with the Richmond Coliseum - all built near the same time. What did each cost? How much has each earned through the years? What has each venue spent on maintenance? What is the present condition of the three, and their future useful lives? What conclusions might be drawn from such a study? Did Richmond use inferior materials/architectural designs? Was maintenance performed adequately and on a timely basis? What went wrong? Do Hampton and Norfolk expect to operate their arenas for several more years? Foresee the need to replace them in the near future? What lessons might be drawn?

George, that’s a terrific idea; and could be a very interesting story for one (or more) of the RTD staff writers to tackle.