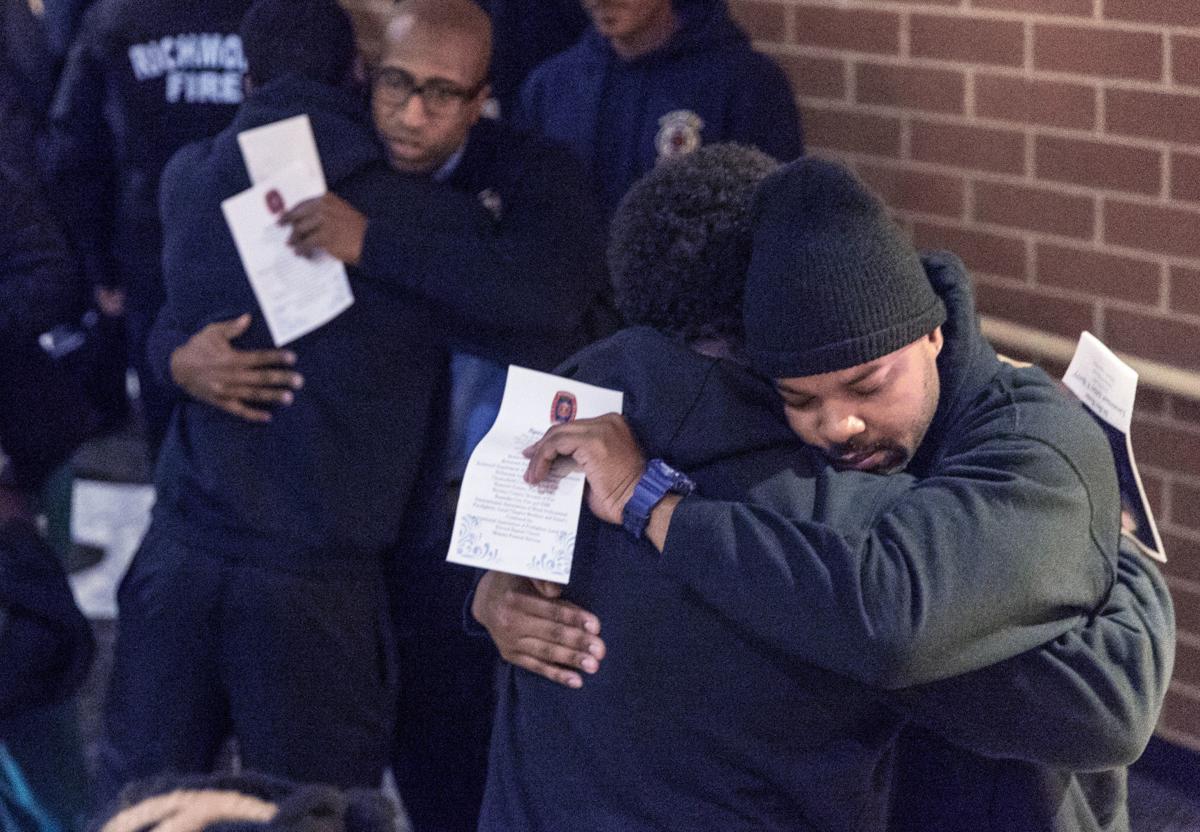 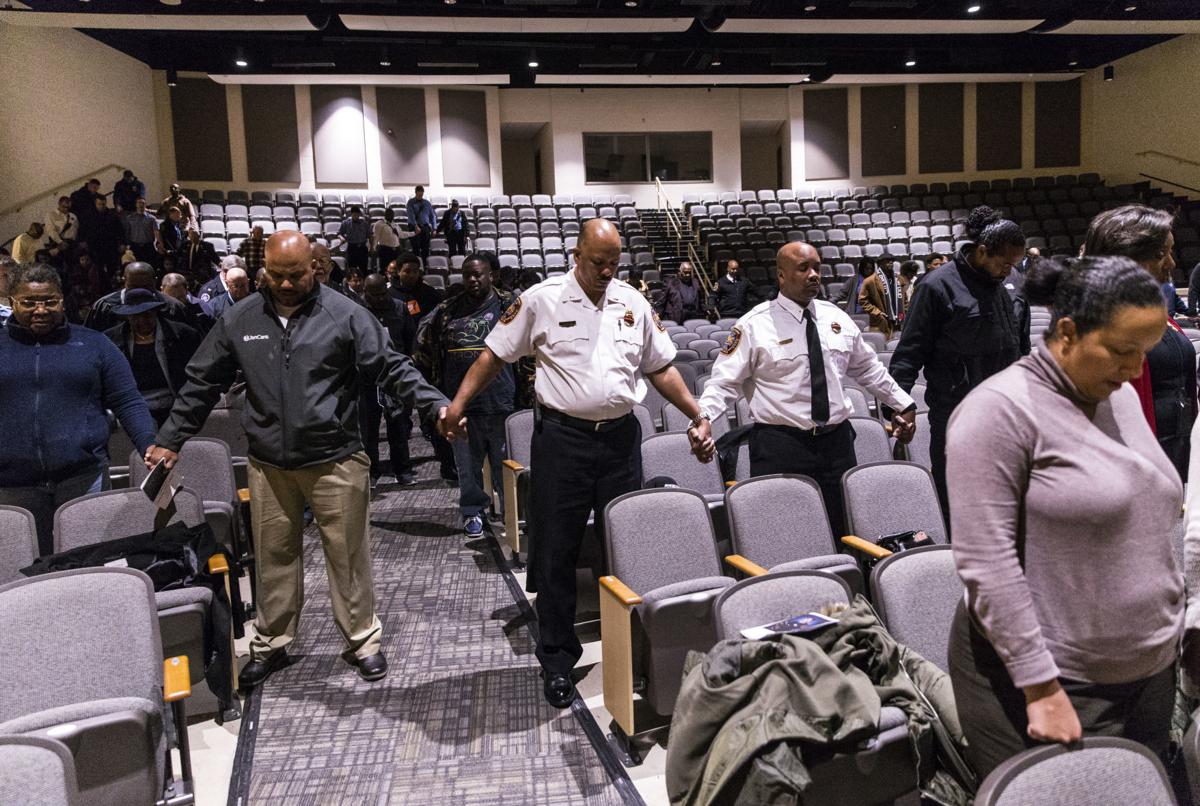 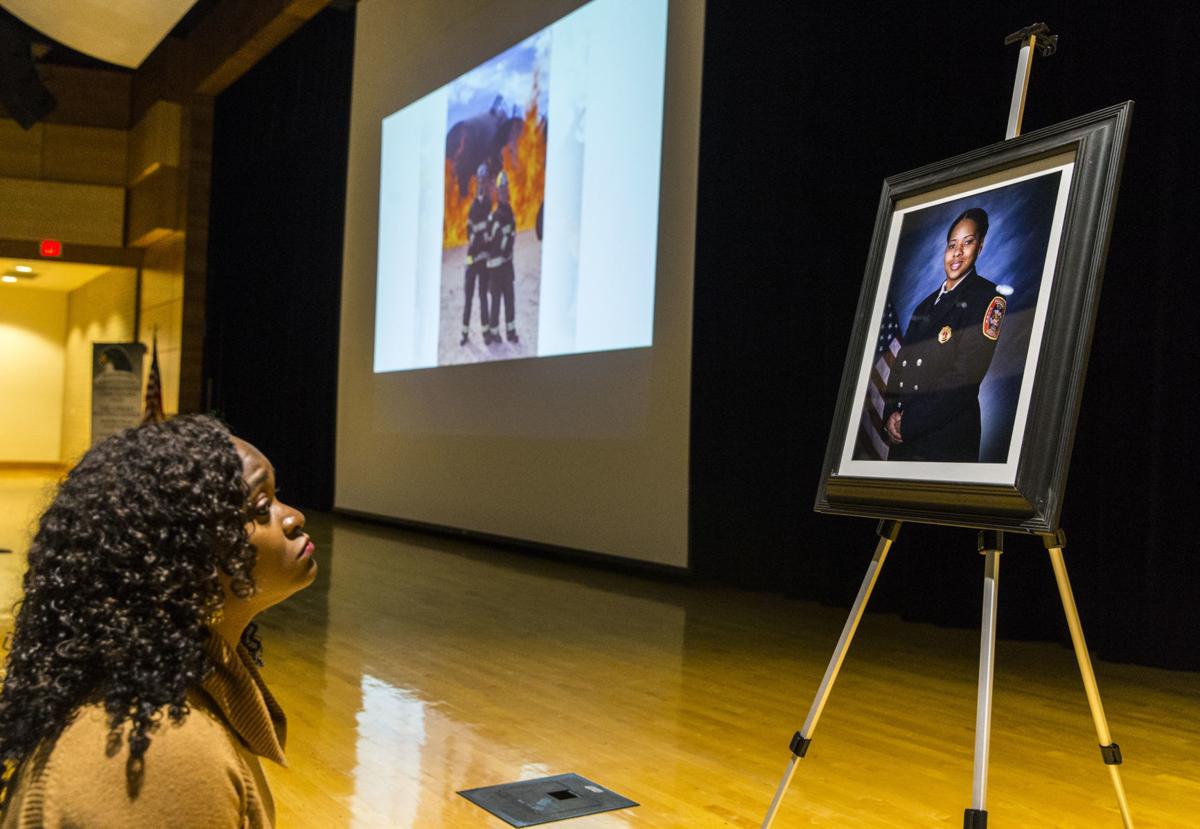 Kimberly Wilson, a co-worker of Ashley Nicole Berry, looked at Berry’s portrait before a vigil at Richmond’s Huguenot High School on Thursday. Berry, a Richmond fire lieutenant, died on Thanksgiving in Hopewell.

Kimberly Wilson, a co-worker of Ashley Nicole Berry, looked at Berry’s portrait before a vigil at Richmond’s Huguenot High School on Thursday. Berry, a Richmond fire lieutenant, died on Thanksgiving in Hopewell.

Friends, family and co-workers of Lt. Ashley Nicole Berry, who was killed in a Thanksgiving Day shooting while shielding her 5-year-old son from the gunfire, shared memories of her dedication and determination at a vigil on Thursday.

Kopacsi was one of a handful of Berry’s colleagues who spoke at the vigil held at Huguenot High School. Many of them said they admired her aspiration and work ethic.

Fire Chief Melvin Carter said the department not only lost a great firefighter that day, but a “piece of my heart.” Berry had served with the fire department since 2011.

“We can only hope that some day that her son, little Carlos, will pick up where mom left off and become a Richmond city firefighter,” Carter said. “That’ll be a great day.”

Carter called the shooting that shortened her life “a careless, evil act.”

“Words cannot capture the anguish, the hurt and pain this fire department feels right now. Trying to come to grips with the senseless, senseless nature of Ashley’s untimely death is absolutely overwhelming. Ashley was the sweetest person you could ever meet,” he continued. “That this can happen to her, it can, and will, happen to anyone. It’s up to us, as a community, to stand up and do something about it.”

Berry was celebrating Thanksgiving at the home of her boyfriend’s family in Hopewell, and was preparing to leave around 11:39 p.m. when she was struck by a stray bullet. The gunman outside was firing at an adjacent residence in the 1000 block of Sunnyside Avenue, Hopewell police said.

Medical treatment was rendered at the scene, and Berry was taken to John Randolph Medical Center in Hopewell, and then for further treatment at VCU Medical Center, where she later died.

“Ashley was not on duty that night, but make no mistake, that is exactly what she was doing,” said Richmond Mayor Levar Stoney at the vigil. “See, she was protecting her child, the way she protected us.

“Ashley was a guardian. She was a protector, running toward danger, not away from it, willing to sacrifice her life to save a life ... Ashley Berry is a hero in my eyes,” he said to applause from the crowd. “Now more than ever, this world needs more heroes. It needs more Ashley Berrys.”

Capt. Earl Dyer, who serves as the city’s fire marshal — the office where Berry had recently transferred — said the department would be retiring her badge number so no other firefighter could wear it.

Hopewell police are investigating the case. Police said a silver or gold SUV was seen leaving the area at a high speed. Hopewell police said it was unclear whether the shooter fired from the vehicle or had stopped and gotten out before opening fire.

On Tuesday, police announced that the federal Bureau of Alcohol, Tobacco, Firearms and Explosives is offering a $5,000 reward for information that leads to the arrest of Berry’s killer. Tipsters can contact the ATF at (888) ATF-TIPS or at afttips@atf.gov.

A public viewing will be held Friday at Mimms Funeral Home, 1827 Hull St., from 9 a.m. until 8 p.m. A celebration of life ceremony will begin at noon on Saturday at Second Baptist Church, 3300 Broad Rock Blvd.

In lieu of flowers, the family is requesting all donations be made to the RFD Foundation Memorial account in her honor. Donations will be accepted at either Richmond Fire Police Credit Union locations, 900 Hermitage Road or 200 W. Grace St.

To donate directly to the family use

Hopewell city leaders on Friday decried the recent uptick in crime and violence in their community, urging residents to do their part as polic…

Forgive me if I missed this. How can we contribute to providing for her family?

Very simple—-somebody so many of us should try to emulate. A true American —- Her Legacy will never be forgotten.