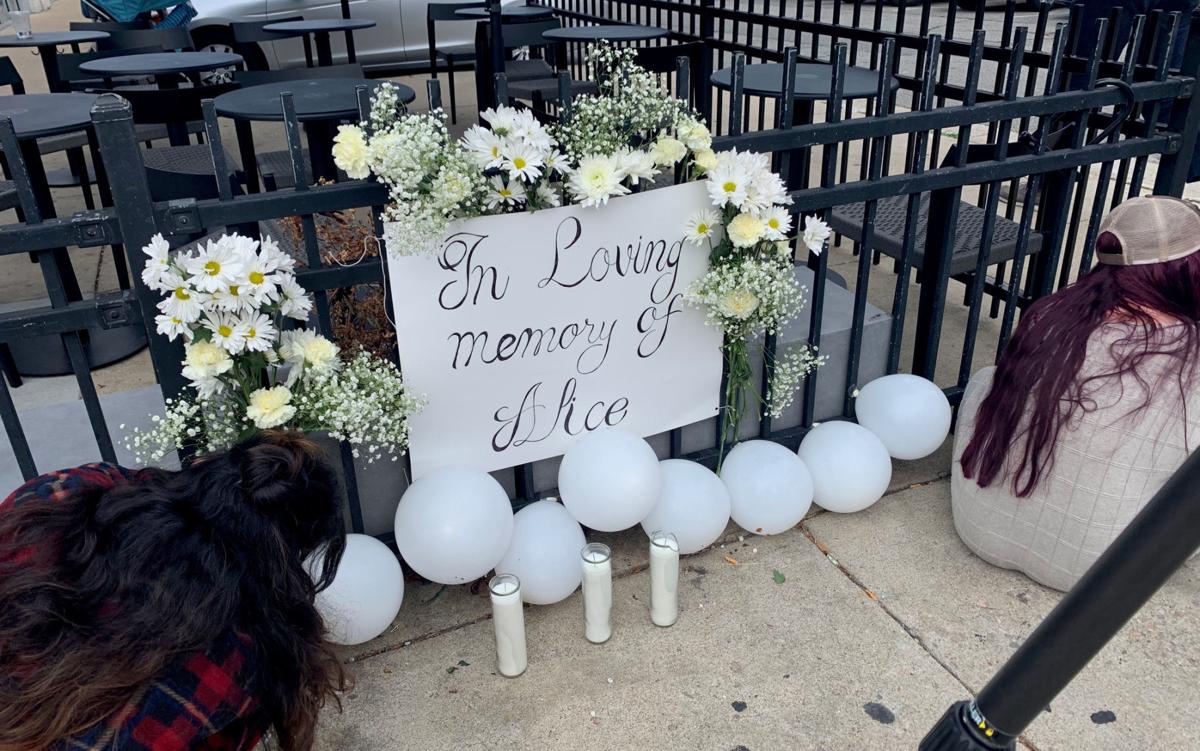 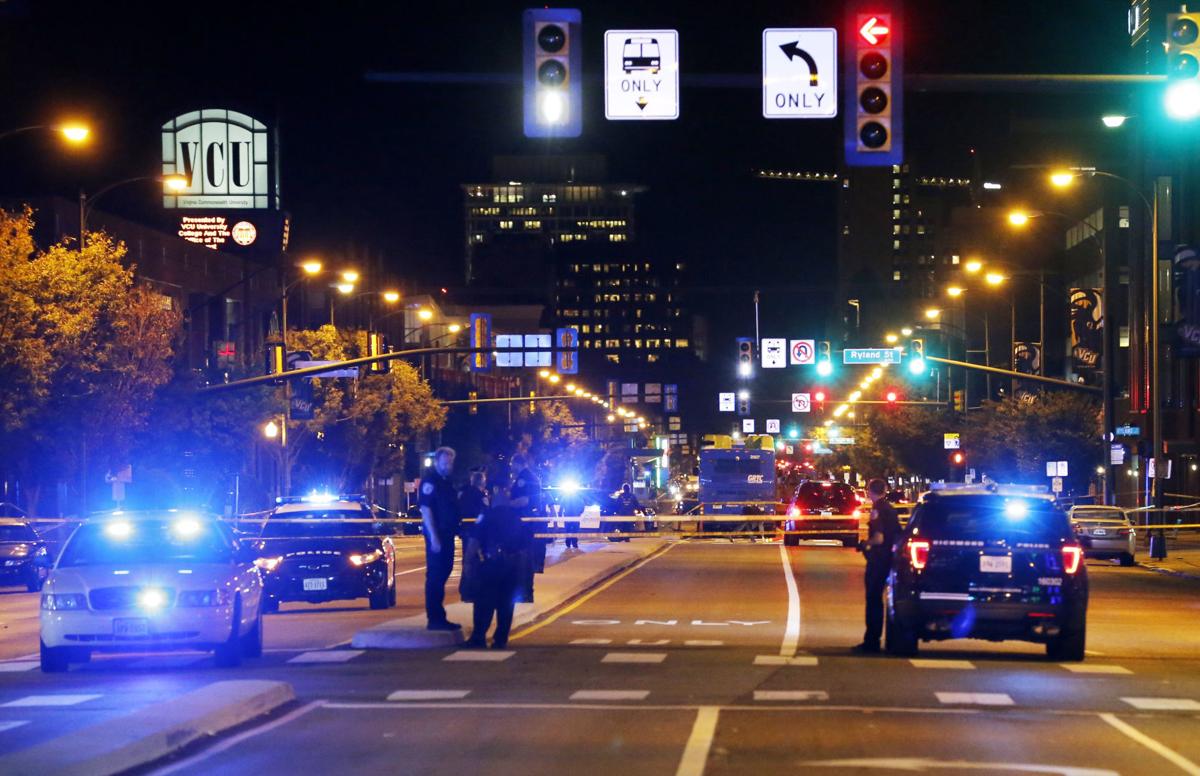 Richmond police investigated Tuesday after a woman was fatally hit by an eastbound Pulse bus on West Broad Street near VCU’s Siegel Center.

Richmond police investigated Tuesday after a woman was fatally hit by an eastbound Pulse bus on West Broad Street near VCU’s Siegel Center.

The day after seeing a GRTC Pulse bus strike a woman in front of their store, baristas from a Starbucks on West Broad Street near downtown Richmond put up white balloons and candles to honor the life of the regular who was killed Tuesday.

Richmond police on Wednesday identified the victim as Alice E. Woodson, 32, who they said died within moments of being struck by an eastbound bus as she was crossing Broad Street about 5 p.m. Tuesday. Authorities pronounced her dead at the scene.

She was crossing from south to north just west of Bowe Street, Richmond police said Tuesday night. The busy intersection is near Virginia Commonwealth University’s Siegel Center, a Kroger store and apartments.

“She was extremely kind and very positive,” said Anna Grace Houtz, one of the store’s baristas who regularly made venti white chocolate mochas for Woodson while chatting with her about their lives or her dogs. “She did not deserve to die this early. She was way too young.”

Woodson lived at the Stuart Court Apartments at 1600 Monument Ave. Two neighbors and the property manager for the apartment complex said she was often seen walking with her three large dogs.

They said she was kind but mostly kept to herself.

Carrie Rose Pace, a spokeswoman for GRTC Transit System, said Tuesday’s crash was the first time a Pulse bus has struck a person. The bus rapid transit system opened in June 2018 and runs a 7.6-mile route between Rocketts Landing and Willow Lawn.

She said the operator of the bus that struck Woodson was taken to a hospital Tuesday, per company policy, but did not report any injuries.

A fare enforcement inspector who was on the bus reported an injury that Rose Pace described as minor. No injuries were reported by the eight passengers, she said Tuesday.

Rose Pace declined to provide information about how long the driver has worked for GRTC or if he or she has a traffic infraction record. She said all operators must maintain a “positive” driving record and attend quarterly safety meetings.

Authorities have yet to provide a full account of what happened moments before Tuesday’s crash and are continuing to investigate, but preliminary police reports say the bus that struck Woodson had the right of way in the Pulse bus lane.

Several witnesses confirmed the preliminary police reports that said Woodson was knocked several feet across the intersection of Broad and Bowe streets.

Chris Cather, a sales associate at the Verizon store on Broad Street nearby, said he did not see the crash happen but saw the victim’s shoes about 8 to 10 feet away from her body. He said the crash was particularly violent and appeared to disturb police and emergency responders.

“It was a pretty gruesome scene,” he said.

Justin Kay, a bicycle courier with emergency medical technician experience, said he tried to help Woodson after hearing a loud thud followed by cries for help outside his apartment.

He knew there was little he could do after seeing her condition and checking her pulse.

“My legs have been shaky for about a day now just thinking about it, sorting through the experience,” he said.

Authorities said video and audio recordings from inside and outside of the bus had been shared with the police. Cather said authorities had also been asking people at several businesses along the street whether they had footage from security cameras trained toward where Woodson was struck.

According to Rose Pace, the last pedestrian fatality involving a GRTC bus was in 2009 at 14th and Franklin streets. Teresa Jones, who was driving the bus, was convicted of reckless driving in the death of Prince George County resident Loucendia Reed Lambert, 55, who was on her way to work at the Virginia Department of Health.

Woodson was the fifth pedestrian killed on city streets in 2019. The other four were:

• On Jan. 1 at 5:48 a.m., a 17-year-old girl died after she was struck in the 4800 block of Midlothian Turnpike, just off Belt Boulevard. The driver, Sherica D. Nelson, who police said fled the scene, is charged with felony hit and run resulting in death and operating an uninsured vehicle.

• Luther A. Waller Jr., 67 and homeless, was killed Feb. 26 at 11:45 a.m. when he walked into oncoming traffic from a GRTC Pulse median in the 3100 block of West Broad Street between Cleveland Street and Summit Avenue.

• On April 20, Yvonne D. Charity, 43, was located around 2:30 a.m. in the middle of the 2200 block of Fairmount Avenue. Police are still looking for the driver of an SUV that fled the scene.

• Shanice A. Woodberry, 22, died June 26 after she and several other clubgoers were allegedly run down in the 1700 block of East Main Street in Shockoe Bottom. Shiauna M. Harris, 21, has been charged with first-degree murder, attempted murder, felony reckless driving and two counts of aggravated malicious wounding in connection with the death of Woodberry. Harris’ sister Simone N. Burrell also faces a charge of failure to report an accident, a felony.

UPDATED: Pedestrian is fatally struck by Pulse bus on Broad Street in Richmond near Siegel Center

Please dont jump to conclusions. Let the police do their job.

if you are looking you can see a large bus, where was her cell phone found?

walking in front of a vehicle that has the right away will result in your death and not a legal win. Bet that she was distracted. I see it all the time in that area.

These Pulse drivers think they own the road. They don’t yield to anybody they mow down people

The traffic may be stopped but the buses keep rolling thru. Not a real bright system.

Can you say lawsuit

Don't pedestrian's always have the right of way? These buses stop for nothing! My condolences to the victim's loved ones.